Overhead the pelicans float on a pocket of thermal air, their wings outstretched, their feathers fluttering lightly on the breeze.  I am floating too, on the surface of the pool, staring at the sky.  It makes me think of Geography lessons and illustrated pictures of the layers of the earth – magma, mantle, the earth’s core, the crust – then the pool, me floating on the surface, the sky, clouds, pelicans, space.  I cannot contemplate this for too long.  The world is so small and so big all at once.

After some time spent swimming I lie on the sunbed and fidget; attempting to read, turning over and over until I’m swaddled in the pool towel, agitated and vaguely damp.  I get restless if I sit too long in one place. And tired. “You can’t be restless and tired,” Tom says, they’re opposites. ‘I am large, I contain multitudes’ I think. Itchy feet but dragging my heels.  I want to take in all of the world with wide open eyes but sometimes I need to shut it all out.

One morning I take a yoga class held on a hut at the end of a jetty; the waves gently lapping against the wooden stilts, the canopied palm leaves on the roof gently dancing in the breeze.  It is so picture perfect it almost seems artificial.  Sometimes things are too beautiful, as if they have been constructed purely for a photograph.  I cannot concentrate on the yoga moves because I’m so distracted by the ~everythingness of it all, like a painting I want to scratch with my nails to see if it is a reproduction or if there really are the strokes of paint and ink embedded in the canvas.  During a balancing pose the teacher tells us to pick a point in the distance and I choose the crest of a wave and watch as it rolls to the shore and then forms again.  Every seventh wave looms largest, white horses dancing on the surface.  I once saw a dedication on a plaque on a bench in Cornwall – “You are the seventh wave”.  The coming together of everything, the one waited for, the most significant.  It was wonderful and sad all at once. 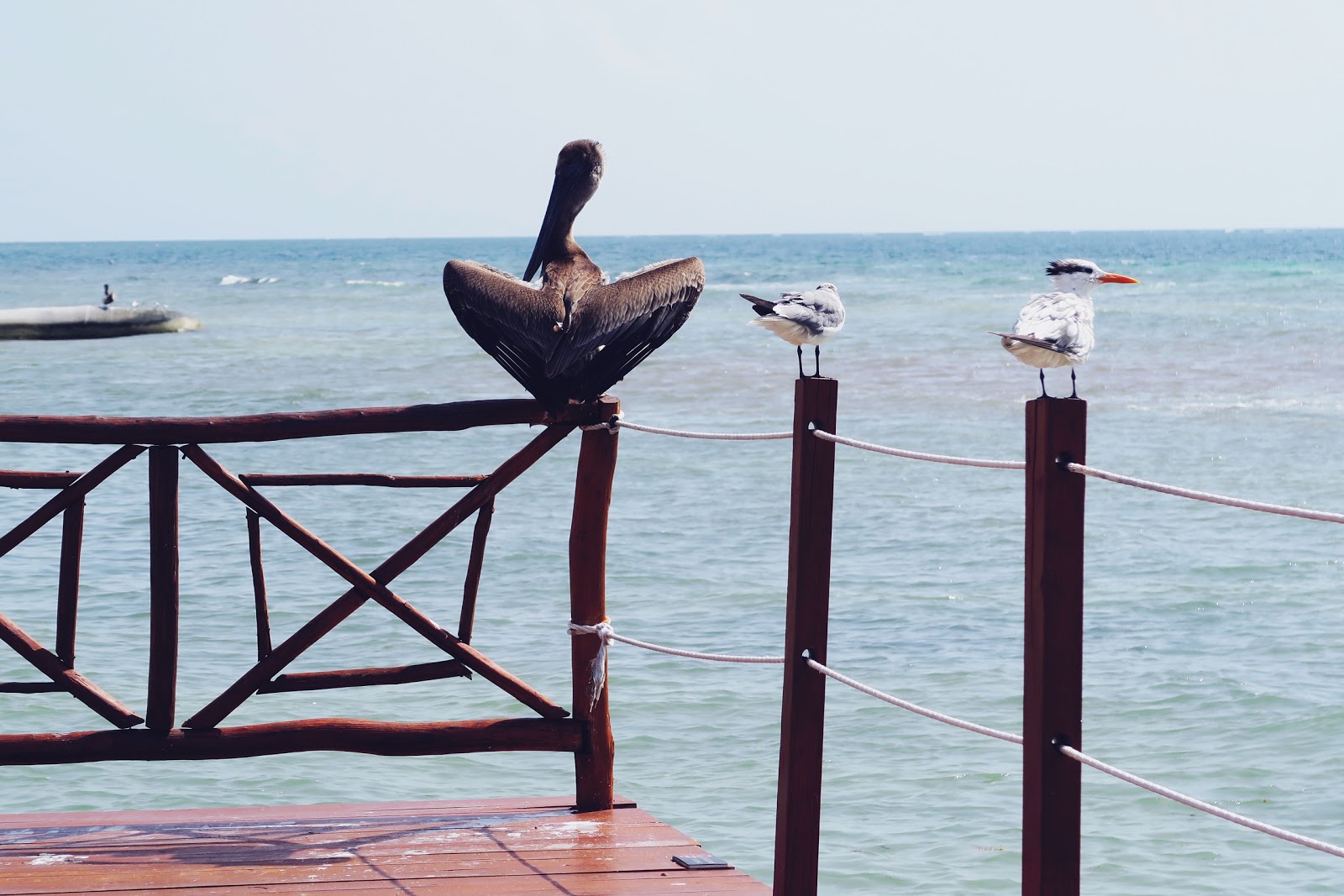 Distracted, I miss the next pose.  During the last part of the class where you lie in contemplation for about ten minutes on the mat, I cheat and open my eyes.  Turning to the side I see a pelican floating just next to the jetty, so close I could almost reach out and touch it.  It’s just bobbing there, the movement rhythmic and buoyant, its long beak pointing down into the water, its eyes seemingly staring right back into mine.  Its eyes are large, dark and round and I think maybe it holds the whole world inside of those eyes and it just keeps it all in, in quiet contemplation, floating on the wave.  I admire how it bobs, not fighting against the tide.  So often we fight against the movement, awkward, arms flailing, getting nowhere.  It is better just to trust our own buoyancy and have faith that we will float (easier said than done, I whisper to the pelican).  When you fight it you can tire and that is when you drown.  Everything is a metaphor for life, in the end.  The pelican floats underneath the jetty. The yoga teacher catches me with my eyes open.

After the class, the yoga teacher tells me that my tattoos (a lighthouse and a ship) look a little like tarot card symbolism.  She tells me some of what they might mean, I tell her that I tried to learn tarot but it scared me.  After I would draw a card my anxious mind would dream up all of the awful implications and hidden meanings behind the card, and so now they sit, wrapped in a silk scarf, in a box, unused.  She tells me that she is a ‘see-er’ (seer?) and she describes a vision that she had when I walked onto the jetty that morning, a prediction (she has eyes that smile when she talks).  Something that might be in my future.  It makes me feel nervous and my mind starts to twist and turn, and then I think ‘float on, pelican. Float on’.  The waves roll under the jetty.  One-two-three-four-five-six-seven. The pelican flies off into the distance and I watch it until it is a tiny speck on the horizon.