I’m just going to start this post by saying that, if there are bloggers out there that can just take an outfit photo, upload it to Blogger and feel generally content with it then I am eternally envious!  Are we allowed to talk about the process we go through to get an outfit post up or is it a sort of bloggers’ secret code that we don’t? To backtrack – you may have seen my post on this studded camo jacket where I did a little step by step DIY.  And then some people in the comments said they liked camo jackets but they didn’t know what they’d wear it with and I was like ‘I have all these outfits in my mind that my camo jacket will look great with, I’ll post some, STAT’.  And in my head it looked awesome with my cutoff denim shorts, desert boots and Nirvana t-shirt (yes I actually like Nirvana, no I’m not one of those people…) but in the photos it just.. didn’t.  So I took some more today when I got home from work and I took maybe 15 and the first one below is the only one that looked o-kay, except for I look kind of grumpy right? The second one is me trying to get Bodhi out of the picture.  He just loves to pose! 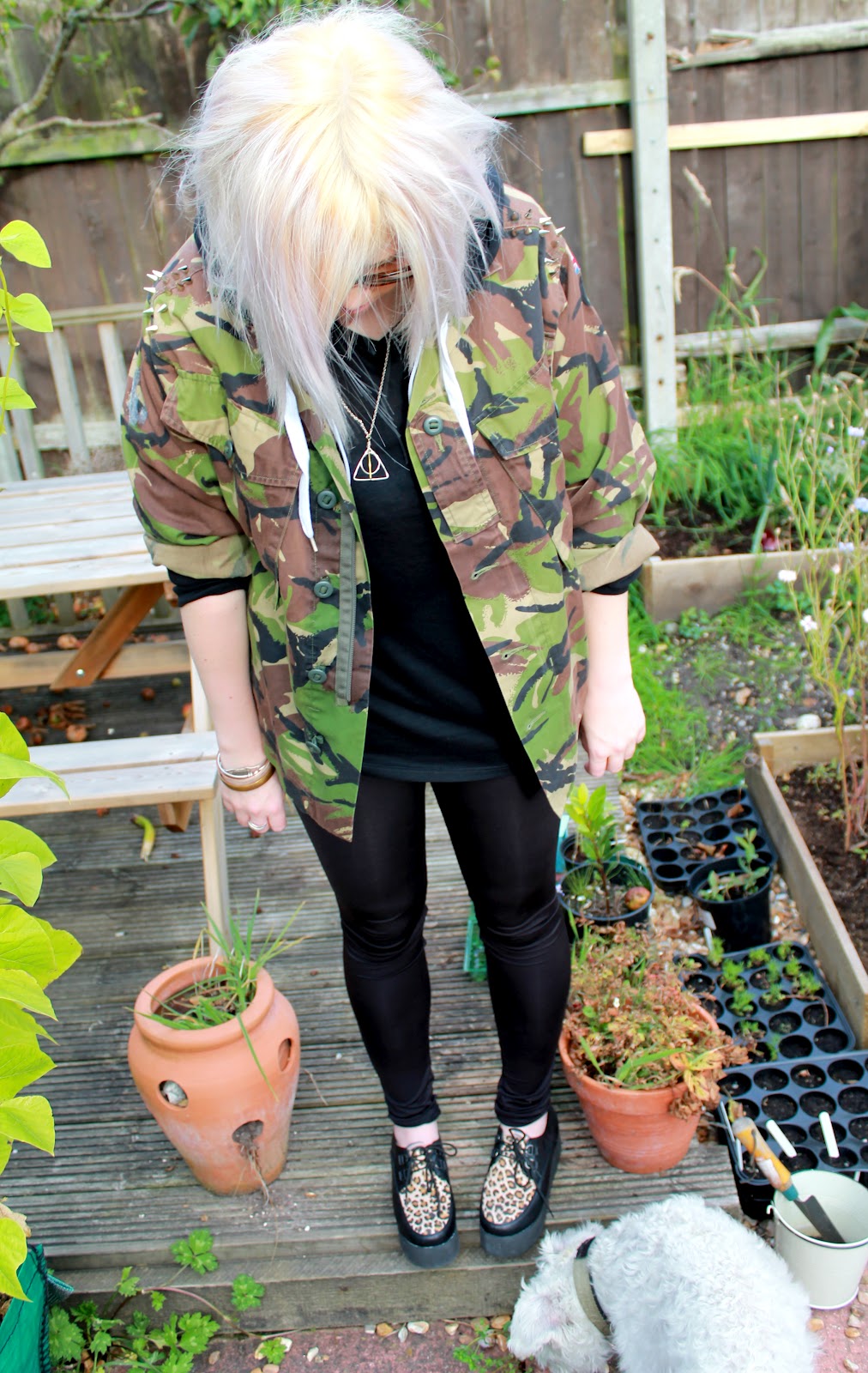 Soyeah, I guess this is one of the outfits I’ll be wearing come Thursday when I ship off to End of the Road festival.  I’d love to be one of those girls that swans around in cute dresses at festivals but I’ll mainly be packing leggings, shorts, vests and hoodies… maybe one or two dresses just in case I feel floaty after a few ciders! By the way, the hoodie in this photo came today from Missguided; it’s this one and it’s currently competing for best £14.99 spent ever??  It’s proper fleece-y and cosy and it’s definitely going to get a lot of wear this weekend.  Come payday I am definitely getting it in some more colours; love this washed out navy colour especially.

Just realised the second photo shows off last night’s activities; Twin Peaks box set, big mug of tea and Tom with a tinting brush dyeing my roots! He is such a good egg isn’t he, and he does it so well! The roots are still looking a wee bit yellow-y but I impulse purchased some Touch of Silver shampoo in Boots today, I normal use the Loreal silver shampoo but I’m about to run out.  Are there any other bottle blondies out there? What do you use as a toner?

Tonight is going to be spent mainly laying out clothes and other bits for festival packing.  We are so lucky that we get to take the campervan; I’m determined to convince Tom to let me string bunting through the awning and there’s a full width pull out bed in the back which I’m planning on covering with quilts and cushions for ultimate luxury! We unfortunately don’t have such luxuries as a means of washing, a mirror or mains electricity but I’ve invested in some 12v (cigarette lighter) hair straighteners which will probably… do absolutely nothing at all.

Currently feeling very excited that I now only have to do three more two hour commutes to my current job before I move to my secondment (a couple of miles away!) at the end of the month.  Oh, and did I mention the two week holiday in Florida in between?  Life is basically awesome right now.