I’ve just returned from an amazing weekend in London celebrating Louise’s hen do with lots of other lovely ladies – including lots of eating, drinking and dancing.  I really love visiting London for the day or a weekend, and so I thought I would put together a guide to some of my favourite places to eat, drink and visit in the capital. 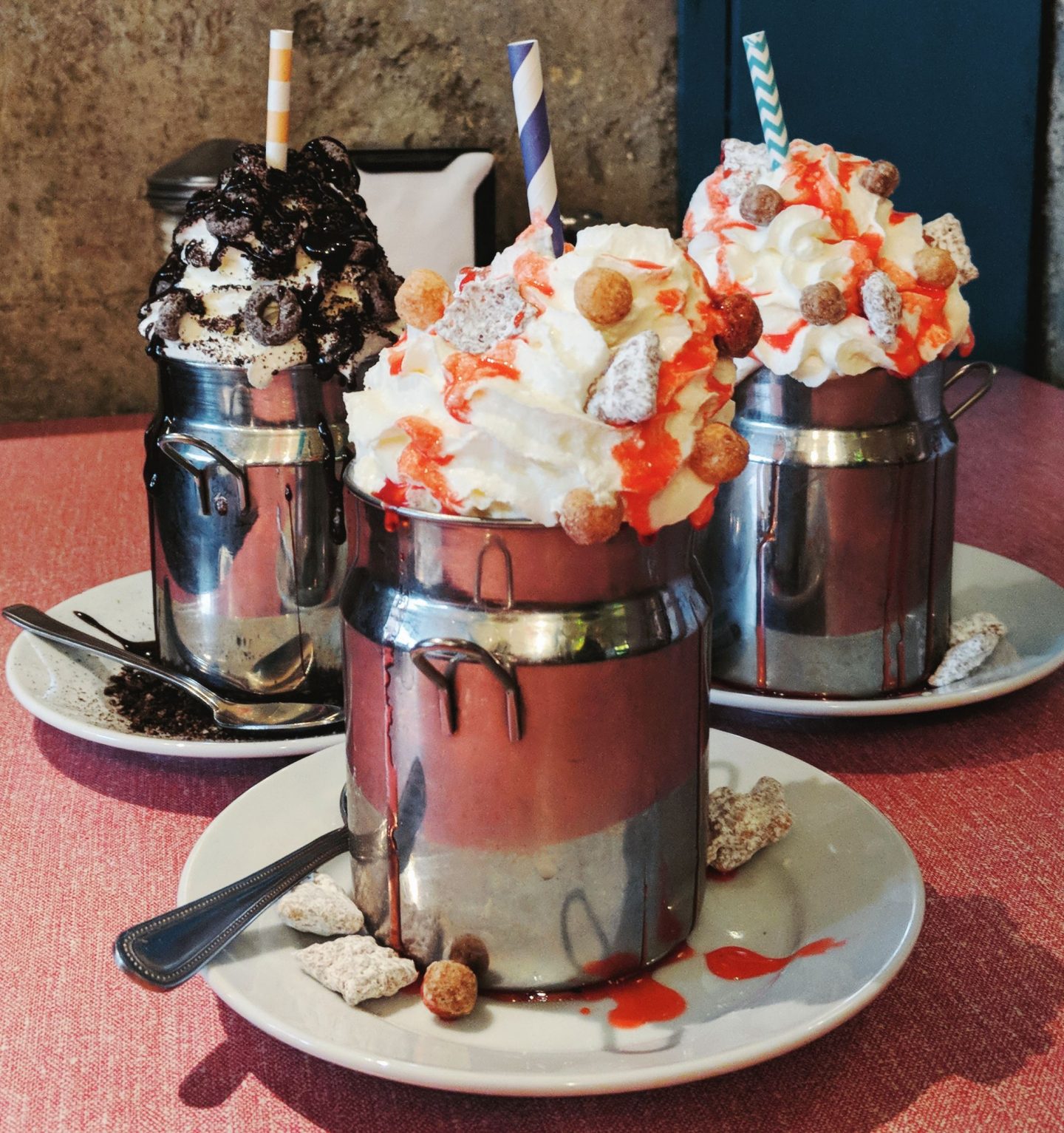 I’m lucky that London is only just over an hour on the train for me so it’s easy to go there and back in a day, however I also really enjoy making a weekend of it and staying with friends.  I’d love to one day rent a house or apartment and get lots of my friends together for a girly weekend – I’ve been looking at vacation rentals in London and there really are some amazing ones on there.

We spent a lot of time wandering around Brick Lane this morning and I can’t wait to visit again to explore the market and check out the many food stalls.  We stayed in Bethnal Green so it was a relatively short walk to the beginning of Brick Lane, which is situated in East London near Spitalfields and Whitechapel.  Brick Lane has a Sunday market with a range of stalls from street food, to vintage clothing, to records.  It’s also a renowned place to have a curry due to the numerous Indian and Bangladeshi restaurants.

There are two branches of the Cereal Killer Cafe in London, with the original one opening in Brick Lane in 2014.  The concept is simple – more than 120 cereals with lots of different options for toppings and milk (yes – salted caramel milk is a thing). 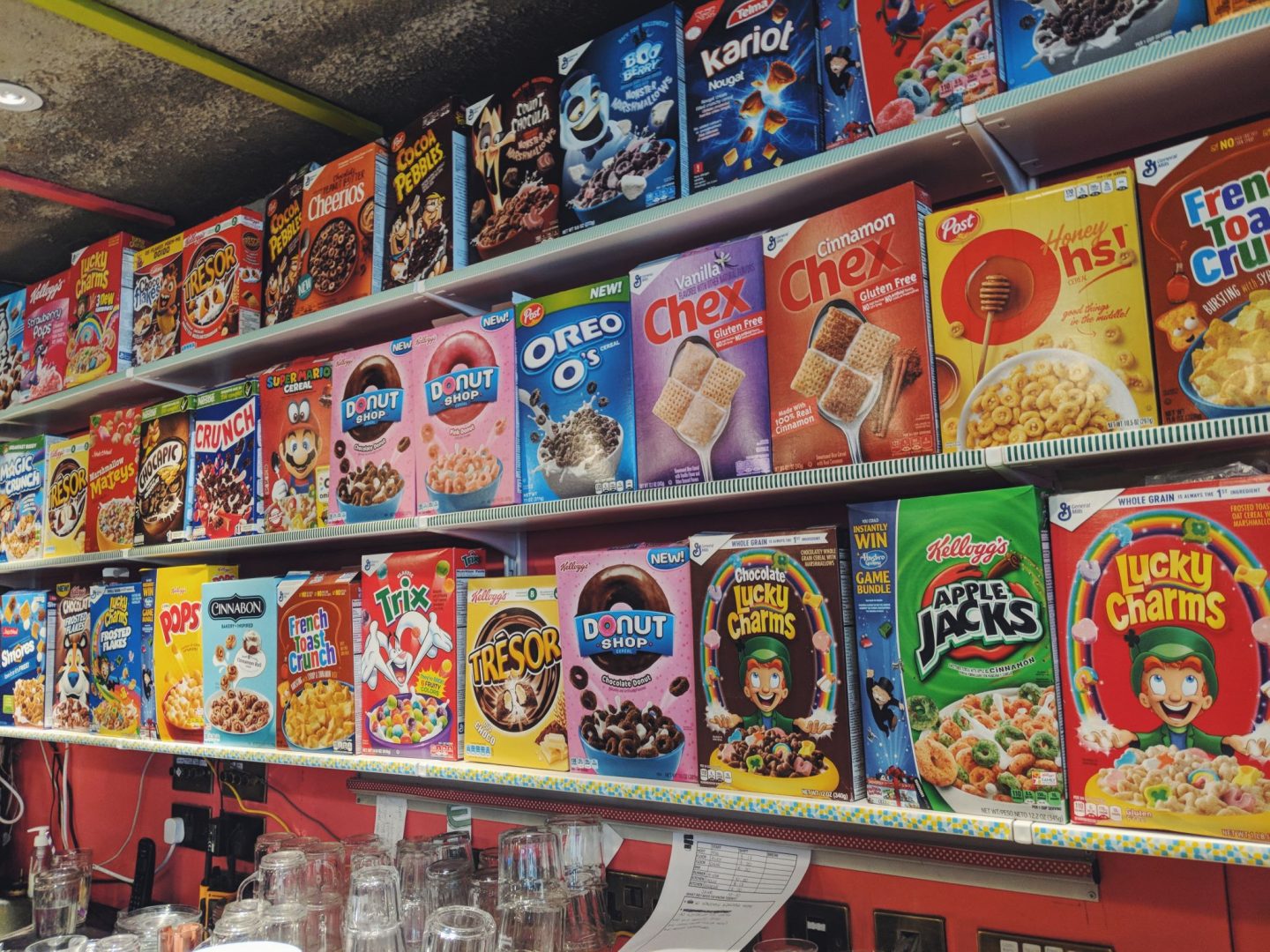 I had no idea that the menu extended so much further than just cereal however – with malt shakes, stacked hot chocolates, cocktails and even some savoury food with a cereal twist.  You can see from the first photo just how decadent the malt shakes were – they are custard based and totally delicious (I had a peanut butter shake – of course).  You can then choose a blend of cereals or some of their recommended mixes – some of which even include ice cream, yum.  I chose Cinnabon cereal and French Toast cereal with salted caramel milk and it was incredible.  For the malt shake and a large bowl of cereal it was around £12 – so it’s not somewhere you could pop for breakfast every day but it was definitely a lovely Sunday treat. 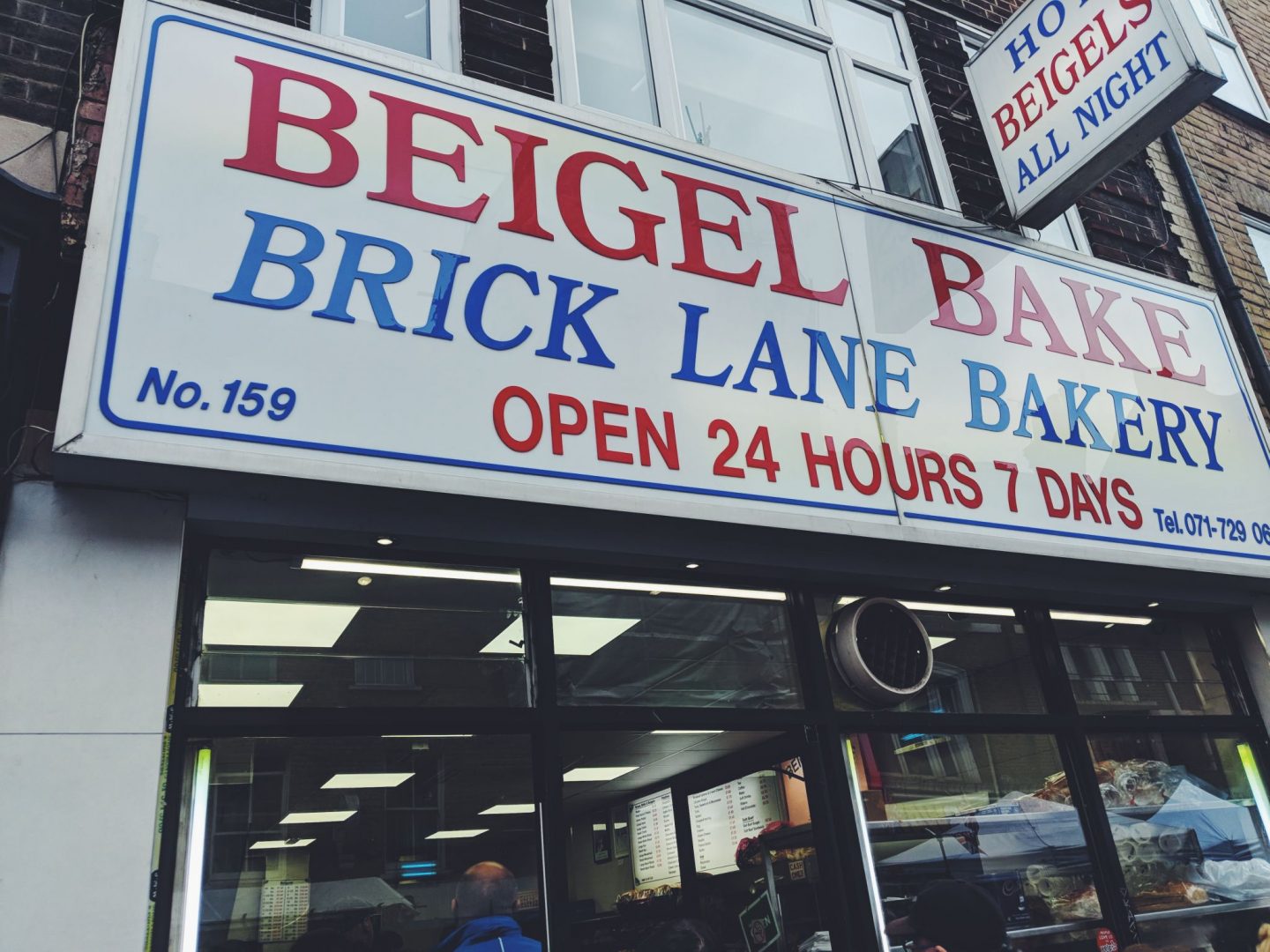 Beigel Bake has been open on Brick Lane since 1974 and has become something of an institution.  Their beigels (bagels) are baked in the traditional Jewish style, and they offer hot fillings such as salt beef, mustard and gherkins, as well as smoked salmon and cream cheese.  They are open 24 hours a day, 7 days a week, so they’ve become a popular choice for post-night out snacks or early morning taxi drivers.  They also serve sweet treats such as cheesecake and Eccles Cakes.  When we visited there was a queue well out of the door, but the ladies working on the counter were moving people along very swiftly!  I bought bagels to have at home with cream cheese – let’s just say I don’t know how I’ll ever go back to supermarket bought bagels now…

Jackson + Rye is an American diner style brasserie with four branches in London.  I visited the one in Soho for a weekend brunch last year and the food was divine – I highly recommend the Farmer’s Eggs, with maple slab bacon, eggs. potatoes, spring onion, Boston baked beans, grilled tomato and toast (that’s making me hungry just thinking about it).  You can also accompany your brunch with a Bloody Mary (or a green juice if you’re feeling a little more saintly). 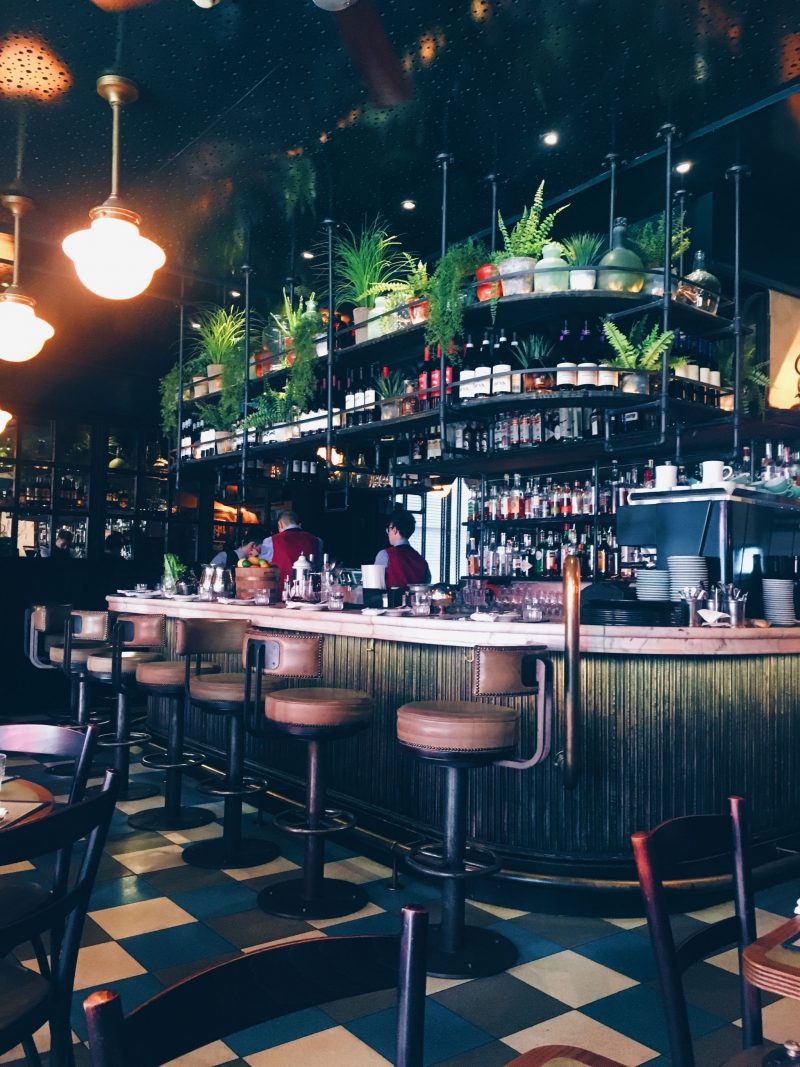 Of course no guide to eating in London would be complete without a mention of one or two of my favourite burgers.  I’m a huge fan of Meat Liquor and Meat Market – my absolutely favourite menu item being their loaded fries with grilled onions and ‘Dead Hippie Sauce’, washed down with one of their ciders.  There are several open all over London now so you’re never too far from an amazing burger, and you don’t find queues around the block like you did when they first opened.  I find it difficult to choose between their burgers and those on offer at Honest Burgers, who also have several branches in London.  I visited their Camden location last year and had the Tribute Burger – served with beef, bacon, American cheese, burger sauce, French’s mustard, pickles, onion and lettuce with rosemary salted chips.  Absolutely delicious.  The rosemary salted chips are in particular a must-have (and I’ve never been able to re-create them at home, sadly). 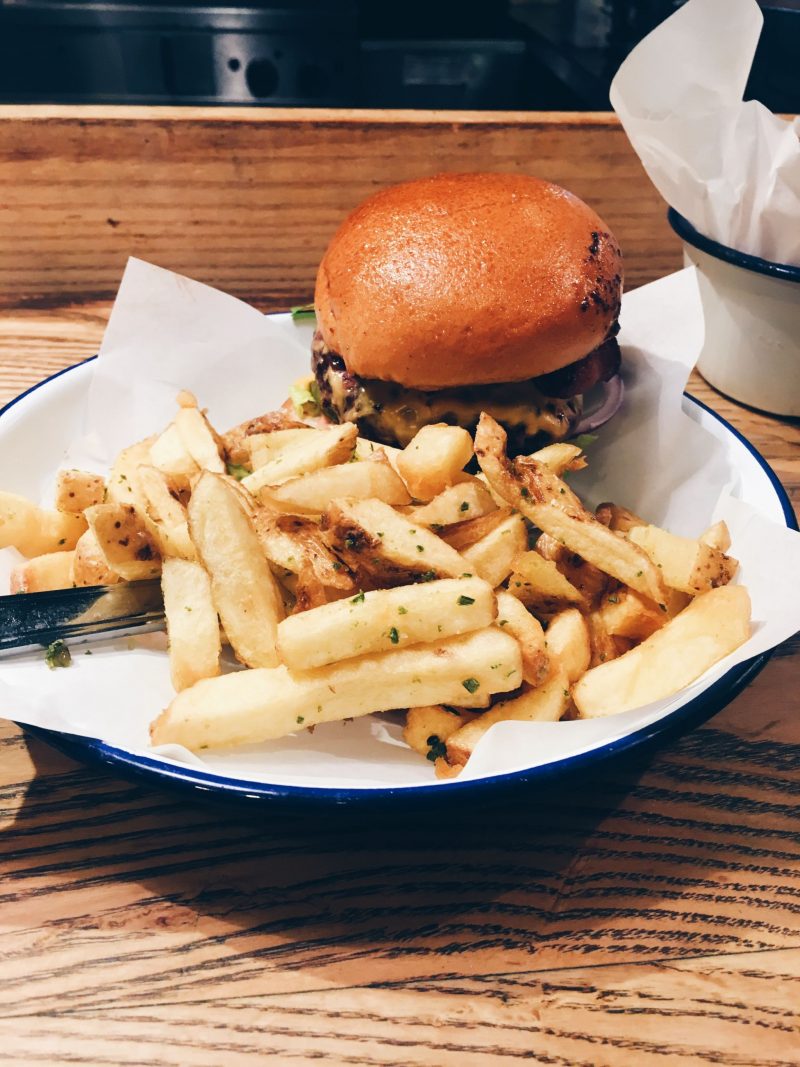 I also really like visiting the food markets in London as there are so many great places to find street food and authentic, fresh fare.  One of the best places to go for a mix of fresh produce as well as cafes and restaurants is Borough Market, in Southwark.  I’ve heard that Padella, which is just outside of Borough Market, is the best place to go for antipasta and pasta, and that is firmly on my list.  Bread Ahead has also achieved legendary status, and is a must-stop for sourdough loaves and doughnuts (amongst other baked treats).  I’ve only tried the doughnuts once but they were utterly divine – with flavours such as velvet chocolate caramel and caramel sea salt honeycomb.  They also do baking courses if you want to learn how to make baked goods with their expert tutelage!  The final spot on my list for a visit is Kappacasein Dairy who offer raclette and grilled cheese sandwiches.  Their grilled cheese sandwiches are made with a blend of cheeses handmade in London, and served on sourdough with pickles.  Doesn’t that just sound like a little slice of heaven?

I love making trips up to London and it’s probably fairly obvious that I am a massive foodie – so you must, must, must tell me your favourite places to eat in London in the comments so I can add them to my list!