We are lucky enough to have lots of great tattoo artists down on the south coast, as well as several renowned studios that offer guest spots to other artists, so I’ve never had to travel far to get tattooed.  This time I had decided on two local artists that I wanted to get tattooed by – so I booked appointments with both, one for my calf, and one for my thigh. 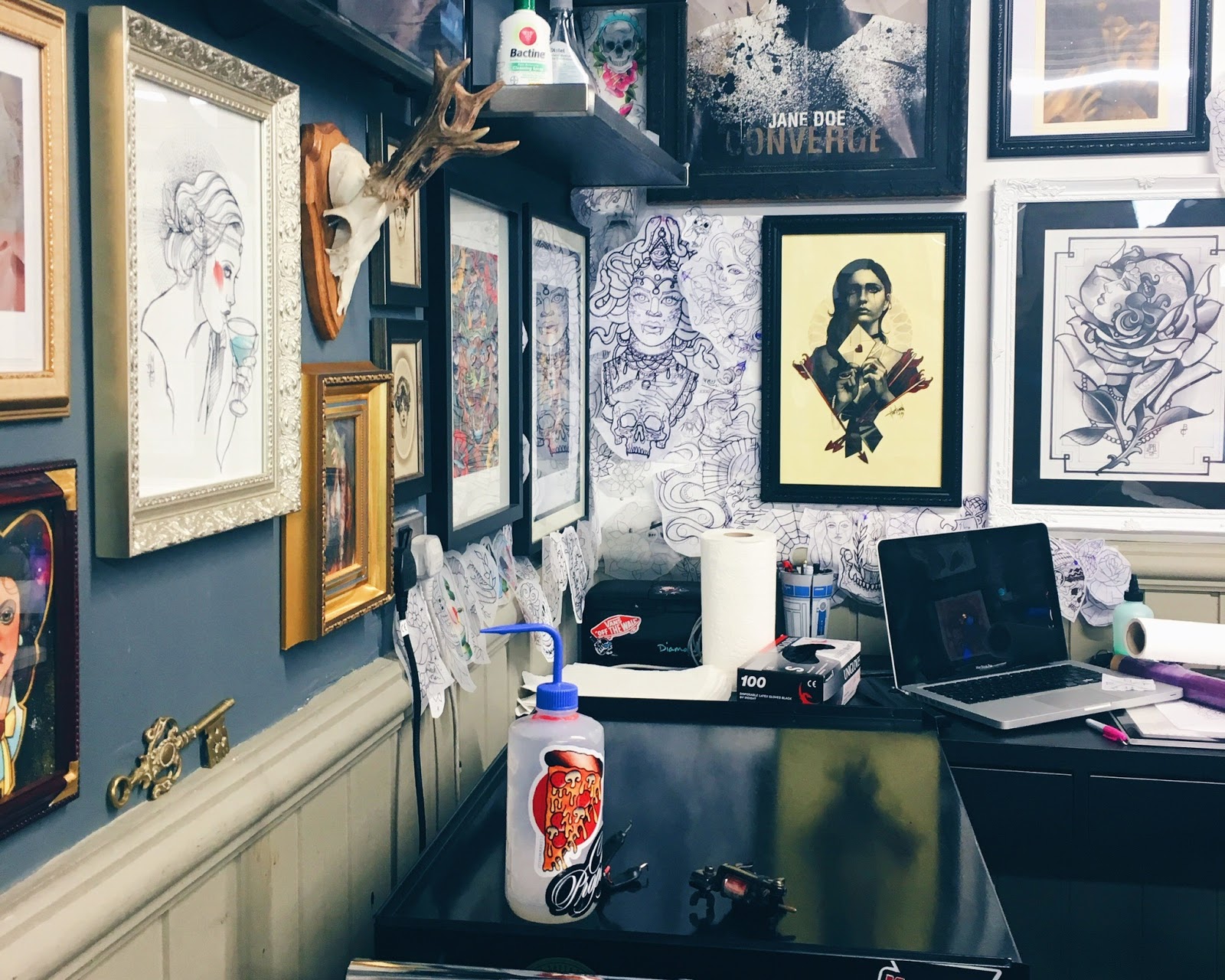 Unfortunately I failed to notice that I had booked one for this Thursday, and one for this Saturday – and it wasn’t until the dates started to creep closer that I realised I would be getting two tattoos on the same leg within three days of each other – oops! Luckily I was working from home on Friday and I have the rest of the weekend to relax, and in the end it actually wasn’t too bad having them close together (and now I have two awesome tattoos to be excited about, it’s such a novelty having two new pieces of artwork to ogle at).

So, on Thursday I arrived at Pauly’s Tattoo in Southampton with a bag full of Lucozade and Haribo (important pre-and-during tattoo fuel), ready to get my calf tattooed by Aaron.  I think it’s actually the first time I’ve gone alone to a tattoo appointment, but it was actually much nicer to be able to chat to the tattoo artist and relax rather than worry about a friend getting bored or listening to them chat whilst I winced in pain! As soon as he got the stencil out and we put it on my leg I started to get so excited as I knew it was going to look great.  We started about 11am and I was done about half past 3 – we did have a couple of breaks though so it was probably only around 3.5 hours of actual tattooing.  Several people had told me that your calf is a particularly painful place to get tattooed, but I didn’t find it too bad – it was only near the end that I started to get fidget-y and feel like I couldn’t sit (or lie!) for much longer. 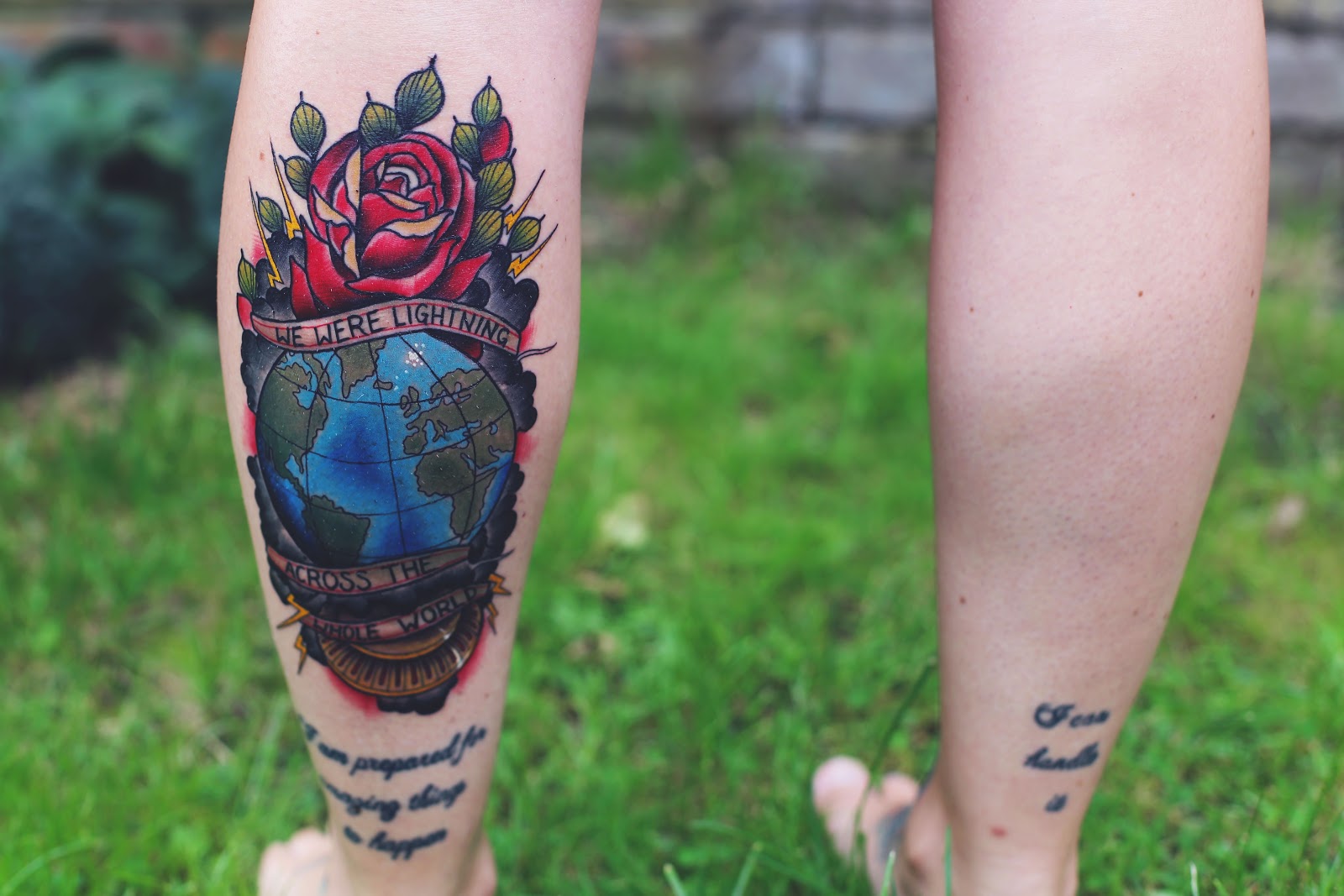 On Saturday morning I then went over to Custom Propaganda to get my thigh done by Dan.  I found my right thigh quite painful so I was a bit nervous about the pain, and it was definitely just as painful as I remembered! Just like any tattoo, some bits were totally fine, and some bits were really, really sore. We managed to get the linework and the black sections done and I have another two hours booked in in a few weeks’ time to get the colour done – I can’t wait to see it when it’s finished.  I’m totally in love with both pieces and can’t wait for them to be healed and looking great. 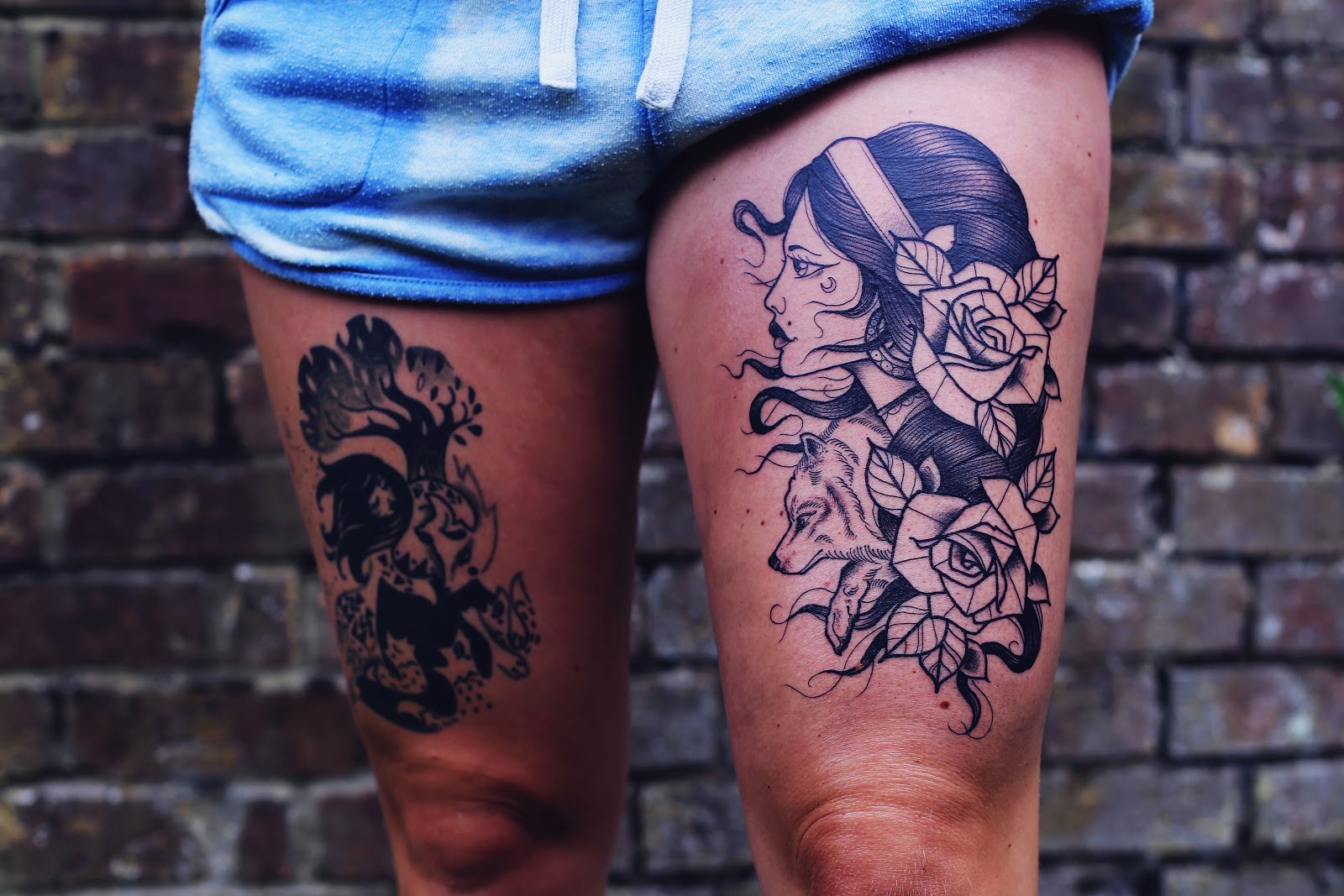 I was recently told by several people (including the people at the tattoo shop) that the previously much recommended for aftercare product – Bepanthem – has changed its formula and is now no longer suitable for tattoo aftercare as it contains lanolin (many people are allergic to lanolin, and as it acts to moisturise the skin by trapping water in the pores of the skin, it may cause a ‘soggy skin’ side effect that can damage the tattoo).  I always hated using Bepanthem as it’s so oily that it tends to stain clothes and bed-sheets so in a way I’m kind of glad that it’s no longer being recommended as the best product for tattoo aftercare.

Any products that have lanolin, petroleum, or added colours, scents or parabens are not advised to be used on tattoos.  I’ve been recommended a couple of different products and have decided mainly to use Tattoo Goo this time – I have the lotion but there is also a salve (although I found the salve a bit more difficult to apply).  Tattoo Goo has olive oil, beeswax, cocoa butter, wheatgerm oil and vitamin E, so lots of natural products that aid in healing and moisturising your skin.  A couple of people also recommended to me Waitrose Baby Bottom Butter (that’s a mouthful!) and as there’s a Waitrose at the end of my road I thought I’d quickly grab a pot of that for when I run out of Tattoo Goo.  It also has several similar ingredients, including olive oil and other essential oils.  Finally, I’ll also be alternating these with the Palmer’s Fragrance Free Cocoa Butter, as recommended by the lovely Rachel at Illustrated Teacup.  After my second tattoo they recommended either the Cocoa Butter, or Lush Elbow Grease or Ultrabalm.  Again, both of these products have all natural ingredients and oils and butters that will keep the tattoo moisturised and soothed.  (Elbow Grease also has the added benefit of making any tattoos that you already have look great, it makes them look all shiny and new!) 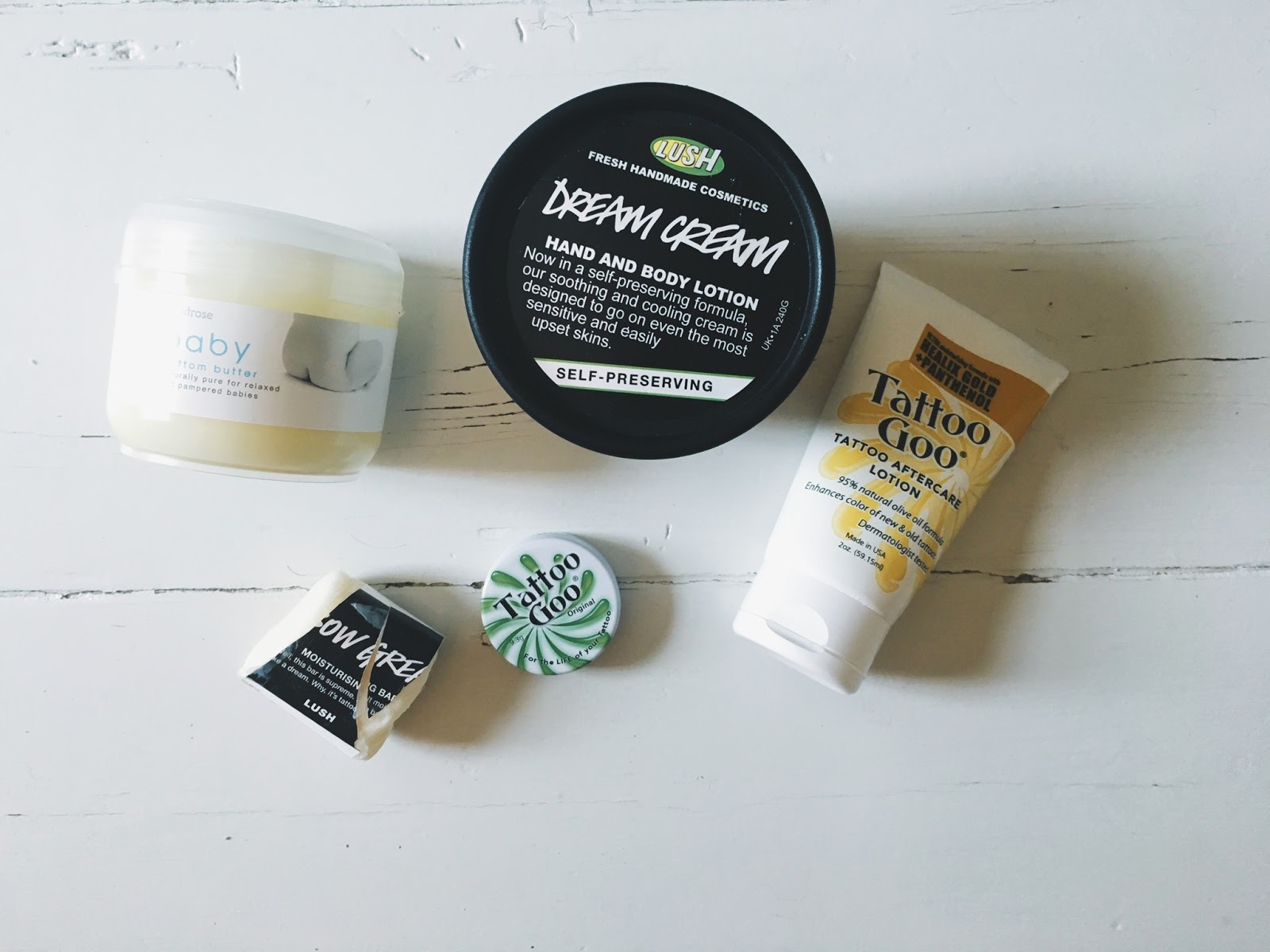 Everyone has an opinion on the best way to heal tattoos and look after them immediately afterwards so it’s definitely worth asking your tattoo artist what they recommend.  Personally I always take a day off after getting tattooed (or try and get tattooed on a Friday so they have the weekend to heal) so that I can rest whichever part of my body is feeling sore at the time! I usually take ibuprofen after being tattooed to help with any swelling and stop it being so sore – there are mixed opinions on whether you can take painkillers before being tattooed (particularly paracetamol, which has the side effect of thinning your blood, which can mean that you bleed more whilst being tattooed) but I see no harm in taking a painkiller afterwards (if you have any doubts however, please do ask your tattoo artist or a GP).

Do you have any tattoos planned?