On Saturday we decided to leave Biarritz for the day in search of some sunshine and tapas, just over the border from France into Spain.  You can drive to the centre of San Sebastian in under an hour from Biarritz, so it’s a fun day trip to make if you’re looking to experience a different culture than that found in the south of France (or practice your Spanish).  Plus it was another ‘stamp in the passport’ for the now somewhat well travelled Bodhi dog!

We set off after breakfast, and drove through a pretty heavy onslaught of rain, wondering if blue skies would await us in Spain.  It seemed such a novelty to be able to drive to another country, especially in our own van and with the dog.  After a slightly stressful five minutes driving around looking for parking, we found an underground car park with an exit right onto San Sebastian’s most famous beach, La Concha. 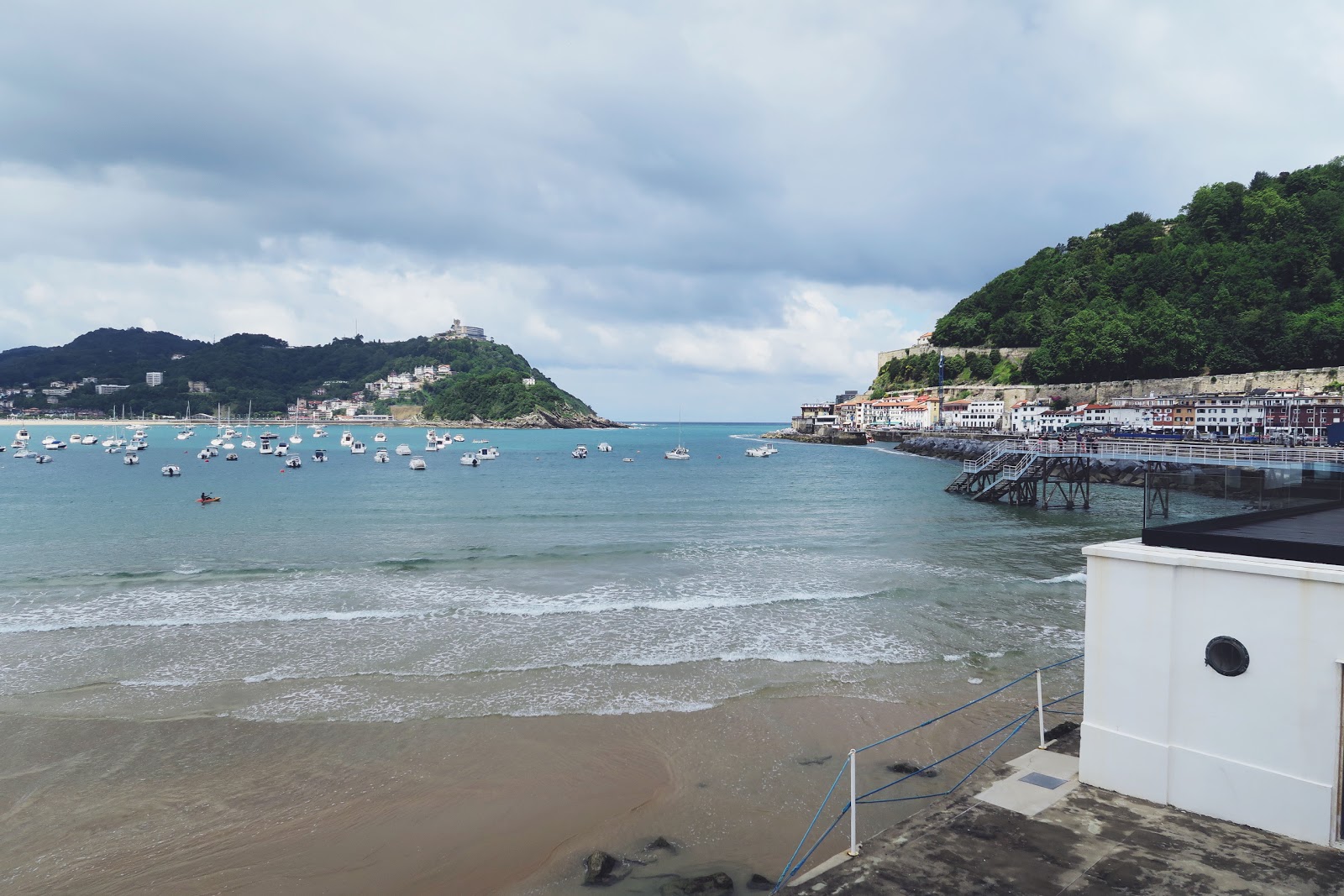 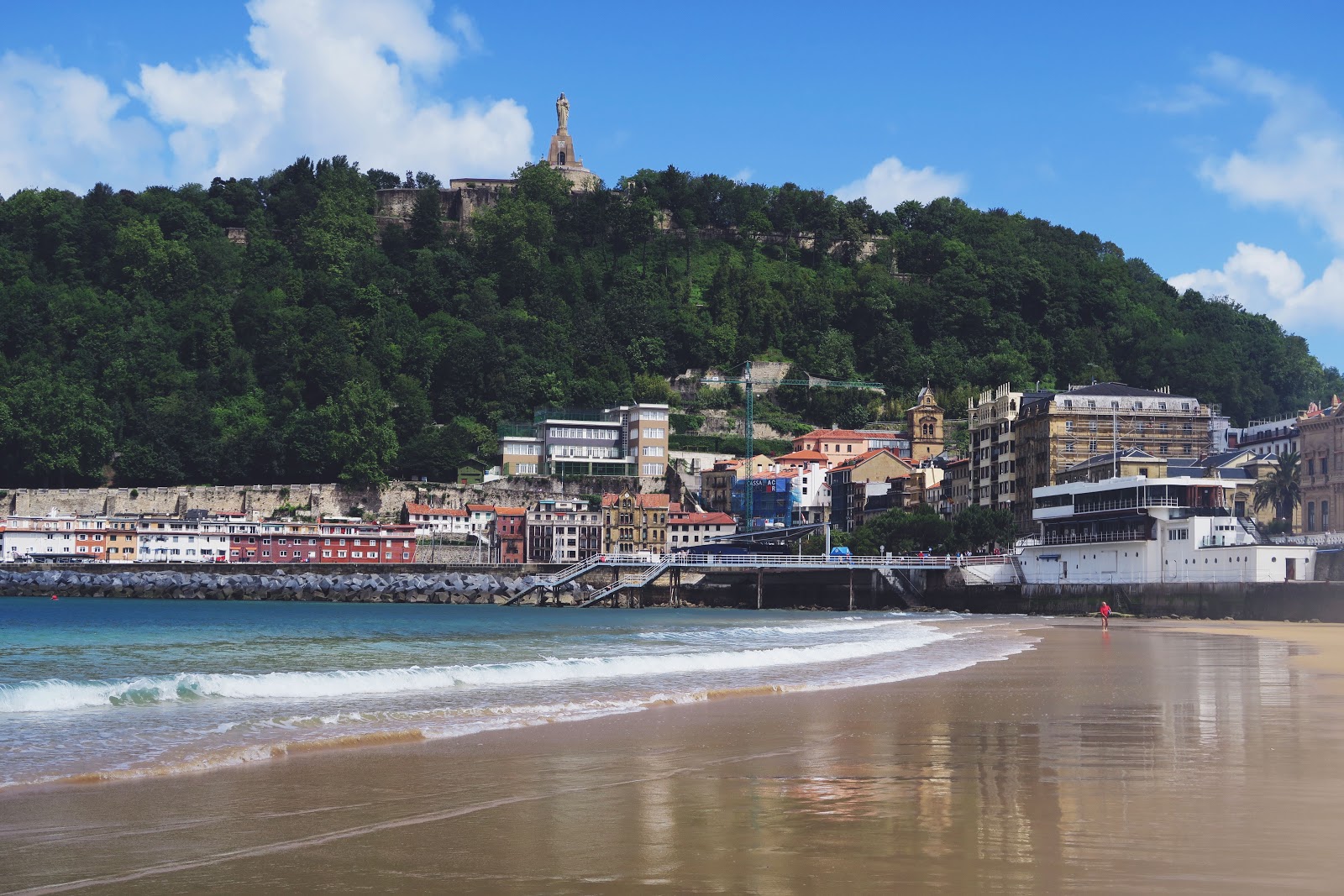 Although the skies looked significantly moody in the distance, it was worth the drive just to feel sunshine on our skin and take our shoes off to walk on the sand.  A handful of people were already laying out towels on the beach, strolling along the shore or paddling in the sea (but I imagine that this beach gets very busy at the height of the tourist season). 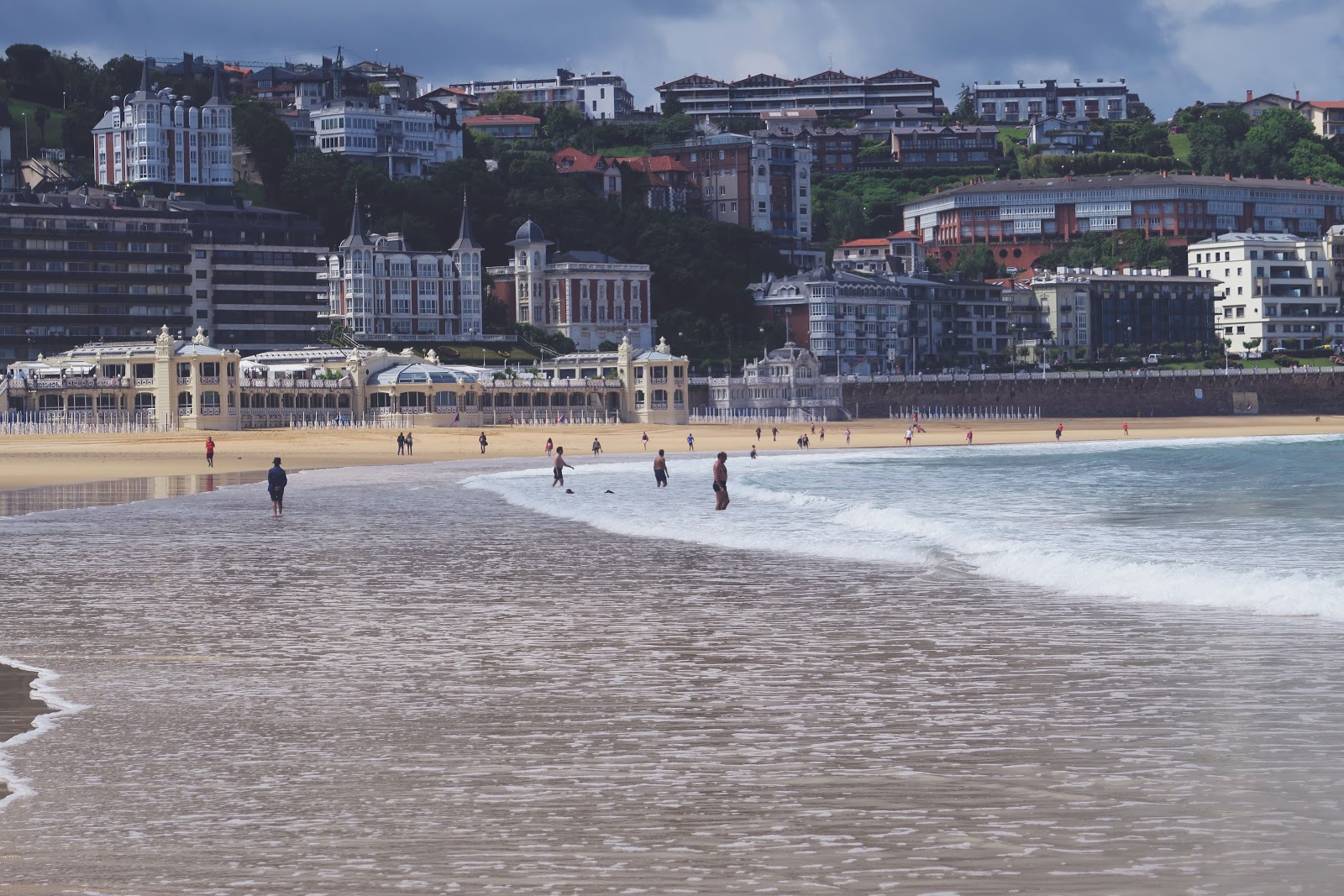 After a walk along the beach, we then walked along to the peninsula to the right of the beach – past the Alderdi Eder Parkea, a beautiful park close to the beach with lots of benches and views over the beach.  It felt just perfect to stroll along in the sunshine, past a man playing the trumpet in the shade of a tamarind tree, with a Belle Epoque carousel gently twirling around.  Behind us was the City Hall – not a landmark in itself but a beautiful old building that used to be the city’s Gran Casino.  We also took in the views of the Victoria Eugenia Theatre, which hosts the International Film Festival.

I’m sorry that I don’t have any photos to add to the views I’m describing – I was just enjoying strolling along, taking in the sights and being a tourist.  As we rounded the corner to see the beautiful marina (Puerto Deportivo) – with the boats bobbing and the pretty buildings across the harbour – we felt the first drop of rain.  We would have liked to walk along to the Aquarium (though we wouldn’t have been able to go in with Bodhi), but we decided to abandon that plan for another day, and head for an early lunch. 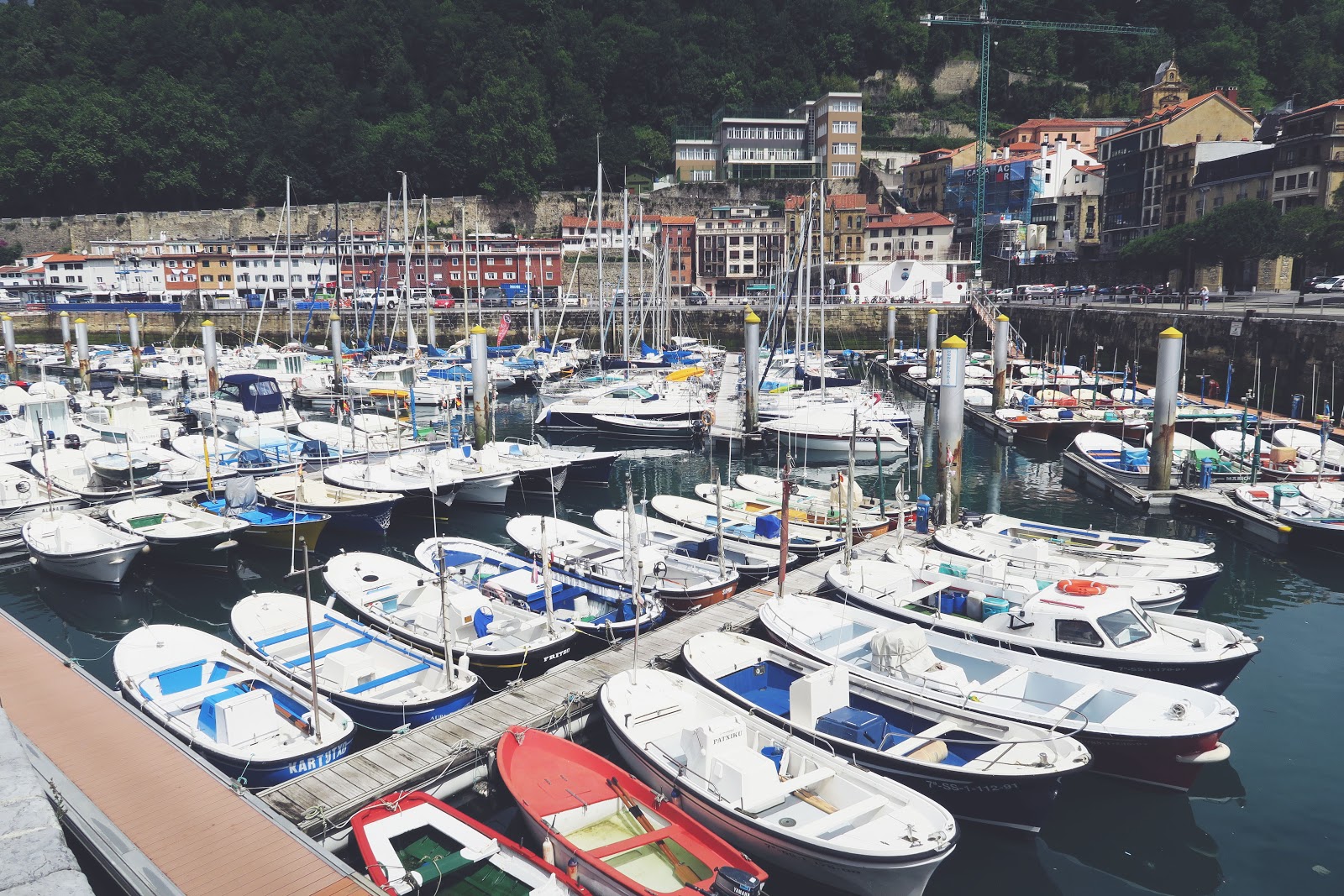 We wandered straight into the narrow streets and alleys that make up the Parte Vieja (the old town) in San Sebastian.  A real maze of food and culture, the old town is nestled around several of the major landmarks, such as the Main Square and two beautiful old churches (we walked past the Iglesias De Santa Maria, where there were street performers and people gathered having lunch on the steps – very pretty).  The streets are lined with pintxos bars (a Basque version of tapas) and souvenir shops, and have a real sense of ambience and a great atmosphere. Most of the bars are centred around the Calle de 31 de Agosto and you can spot the best ones by the queues forming outside before they open.  Pintxo bars are easily spotted by their counters, which are loaded with plates of small bites, often on top of slices of baguette (well it is only just over the border from France, after all).

It started to really hammer it down with rain when we were walking around, so we dived into the nearest bar, the Bar Restaurante Munto.  We grabbed a table and eagerly eyed the food displayed along the counter-top.  To try the pintxos, you ask the barman for a plate, load it up with whatever you’d like to try (we found that each item cost around €2 or €3) and then you hand the plate back to the barman who will take away anything that needs heating up.  We had a real spread of items, from goats cheese and honey on a small slice of bread, mozzarella and pesto, sardines, sausages (which were totally delicious) and prawns with a type of sauerkraut.  Of course it had to be washed down with a glass of the house wine – I had white and Tom had red and both were really, really nice.  In total, for about six or seven dishes and two glasses of wine we paid about €19, which is about £14. 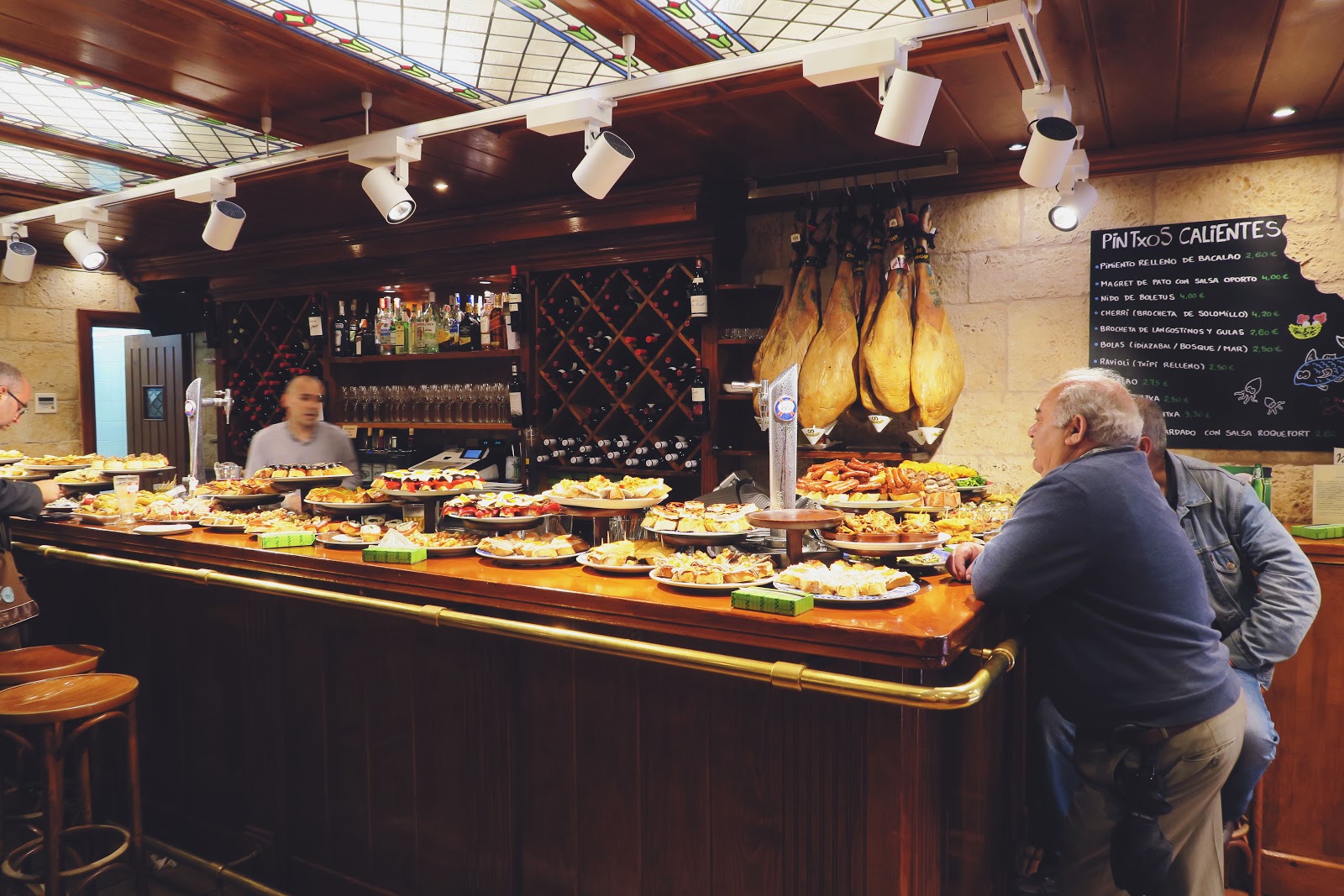 Each bar often has a speciality and if you can muster up enough Spanish to ask, then it’s good to find out which dishes they recommend.  The one we visited had lots of fish, though the dried ham hanging from the ceiling also meant there were also cured meats on offer.  The barman was friendly and helpful and there were clearly lots of locals in there enjoying a light lunch and a pint of beer.

If it feels like a bit of a minefield (and there really are what felt like hundreds of these little bars), you can go on a walking tour of the Parte Vieja and be guided by the locals and try the specialities in each place (try San Sebastian Pintxos Tours).  I think that’s definitely something we would do if we came back, particularly as we loved our Porto food tour so much (what can I say, we love food!)

After leaving the bar, we did some more exploring and strolling around, but it had started to get quite chilly and the rain wasn’t showing any sign of stopping, so we decided to go for a last stroll along the beach and then head back to Biarritz. 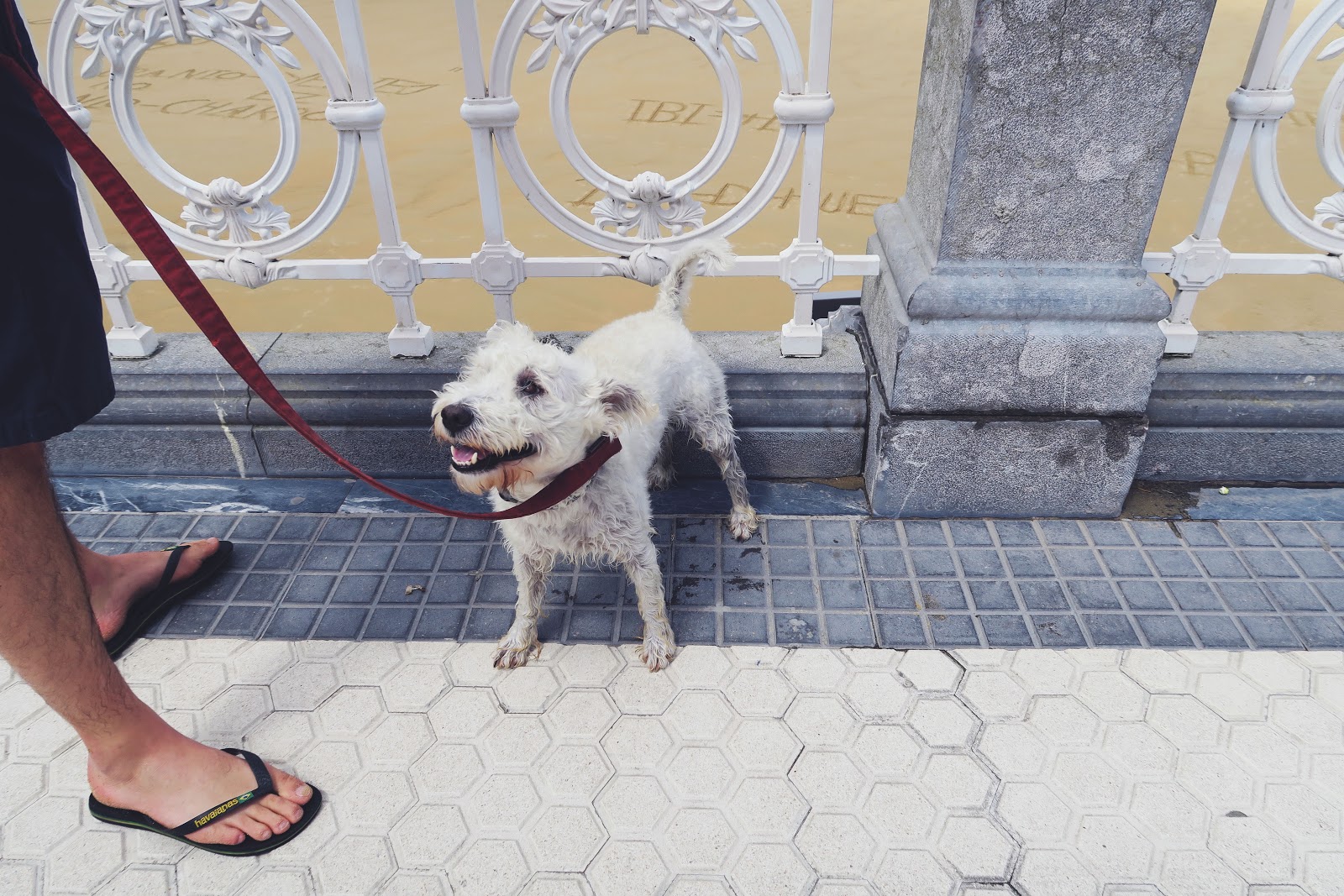 I’d definitely like to head back to San Sebastian again one day when the weather is a bit nicer – I think a day of strolling around in the sunshine, eating pintxos and drinking wine would be pretty special!  PS – This is Bodhi trying to get out of the sea after Tom took him for a paddle to cool off.  He really doesn’t like the water! 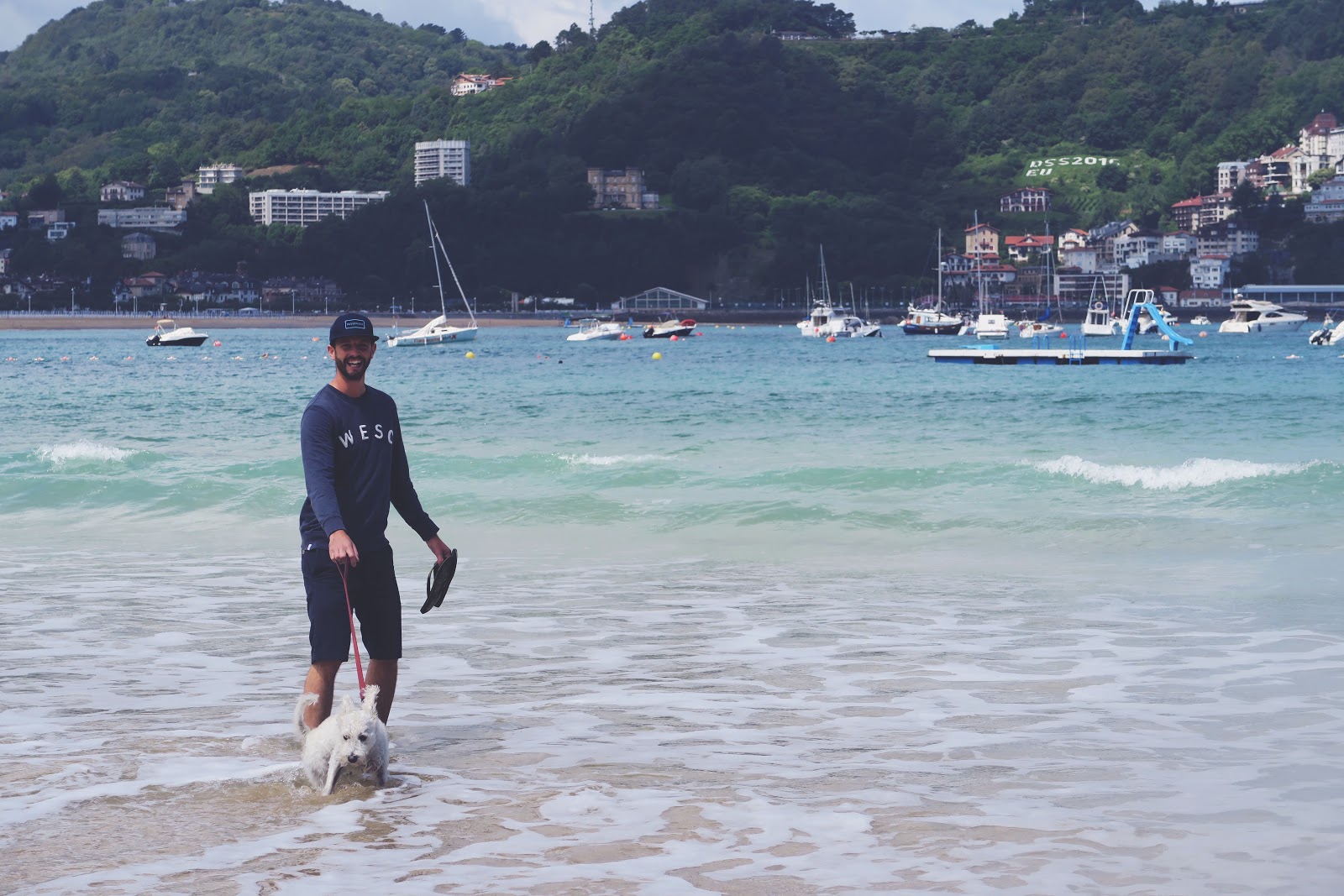 Have you visited San Sebastian before? What did we miss?