I am thinking now of something that happened last week, when I was leaving a pub after catching up with a friend. It was dusk, the first Spring day when it had felt optimistically warm.  I always feel like the air is slightly electric on days like that – a pang of heat still hanging in the air, the sky lazily moving through the colour spectrum.  Uniform blue, inkwell blue, thundercloud blue, and on and on until the trees are no longer silhouetted against the sky and the darkness pulls its cloak around your corner of the world.  I like being out driving at that time, particularly when the journey meanders through the Dorset countryside; winding roads and the smells of countryside air through the slightly cracked window, the headlights catching the eyes of foxes and farm animals as they stare back through fences and forests.  I had an Orson Welles radio show lined up in my Podcasts app, the heating turned up to match the mild temperatures outside, and I felt a sense of civilised contentment.

As I pulled out of the car park, another car drove in.  A sporty saloon in royal blue, with garish stickers on the side. The low hum of a high performance engine, increasing in pitch as the driver accelerated up the driveway; smooth tarmac giving way to the crunch of gravel.  As I stop to let them through, the driver throws a half-hearted wave in my direction, but doesn’t make eye contact.  But she does – his passenger, with her head tipped back and arched in my direction as she dispenses a lingering sideways glance.

There is nothing, and yet also everything, contained within that glance.  Her lips are slightly pursed, as if she is drinking wine (I am reminded of the Peter Sarstedt line – “You sip your Napoleon brandy, but you never get your lips wet”).  She is too young to know how to push her lips into that shape, to communicate possibility by pulling back her cupid’s bow.  She is, maybe 17 or 18 – something that begins with a one, certainly.  An age that feels like a lifetime ago to me.  My sense of contentment fades into a pang of something different – envy, nostalgia, regret; a blend of emotions that draw you into the distant past.  Oh to be an age that begins with a one again – 16, 17, 18, 19…  In the rear view mirror I watch her slide out of the car; long, slim legs in skinny jeans and boots, a leather jacket draped across her shoulders.  At that age you have not learned yet to be ashamed of who you are.  As I drive away I watch her arch her back and shake her hair loose and I think, there is nothing more powerful than a woman with a sense of reckless abandonment; that blend of confidence and indifference that is undeniably potent. 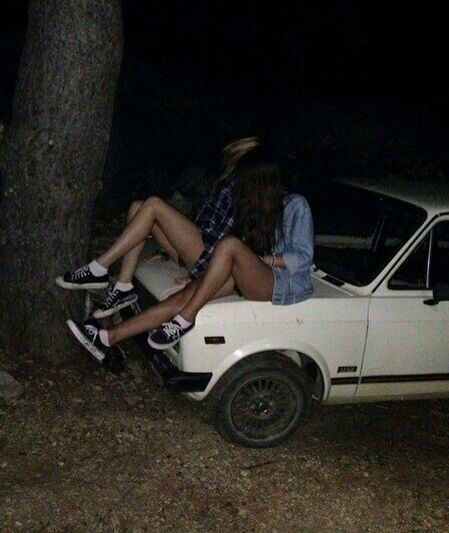 At that age I was riding in cars with boys too – I think back to that time often.  Here is a memory: sat in the back of a friend’s car, windows down and night air billowing in.  The stereo on, loud, and everyone singing at the top of their lungs; shouting out the words because your favourite songs mean so much more at that age (they say everything that, at 18, you cannot articulate yet).  A friend passes you a bottle of something and smiles, and you throw your chin back and laugh, and there isn’t a joke but it’s just that you realise that nothing could ever be as perfect as this.  The boy in the passenger seat is smoking a cigarette and it hangs lazily from the corner of his mouth as he turns and takes the bottle from you, gently, brushing his hand against yours.  At that age, boys smell like smoke, and dirt, and grit and oil.  As you hand it back you lean against the window, the cold glass against your cheek, streetlights leaving light trails as the driver accelerates.
When I think back to this time, I think that the reason it is such a poignant memory is that, at that age you have those moments where you feel… wild.  You don’t have a sense of responsibility, of self-consciousness, of limitation.  You don’t care what happens tomorrow, next week, next year.  You don’t have a to-do list, a life plan, a savings account, a career path.  I think the reason that so many of us have such fond memories of our teens is because it’s perhaps the last time we were truly present and in tune with just being.  That’s not to say that my teenage years weren’t full of angst, but they were full of feeling the things you’re meant to feel – love, heartbreak, jealousy, joy, sadness, love, love, love.  Not anxiety about having said the wrong thing in a meeting, or how many hours on the treadmill it will take to burn off that slice of pizza, or how to achieve the perfect instagram flat lay.  The emotions that are felt by wild things, not things that have been tamed.

And so, I think the reason why that glance is jarring to me is because it represents something I no longer am.  In our 20s and 30s we get the edges rubbed off, the sharp corners smoothed out.  There is a lot that can be said for civilised contentment, for Orson Welles radio shows and knowing that your slippers and blanket are waiting for you at home.  But maybe there is also something to be said for the wildness of youth, for reckless abandonment, and for nights spent riding in cars with boys.