I thought I’d post a quick round-up of a few new products that have hopped into my make-up collection in the last week – a Laura Mercier Primer and Tinted Moisturiser, a Mac Eyebrow Pencil, and a new primer, that also just happens to be a £4 men’s shaving balm (more on this later)…

But first, the beauty products you’ll find in the make-up aisle rather than your local Asda! 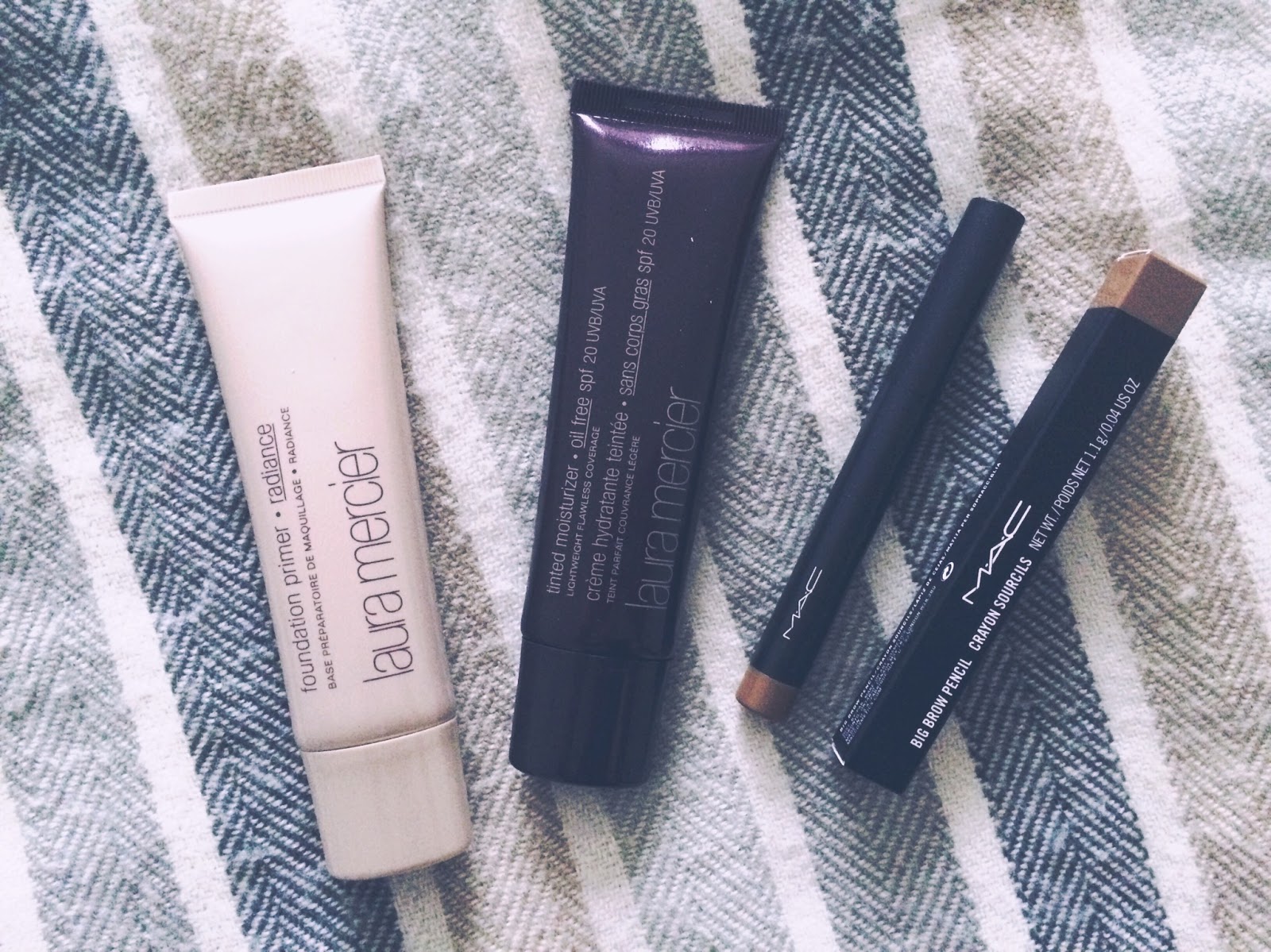 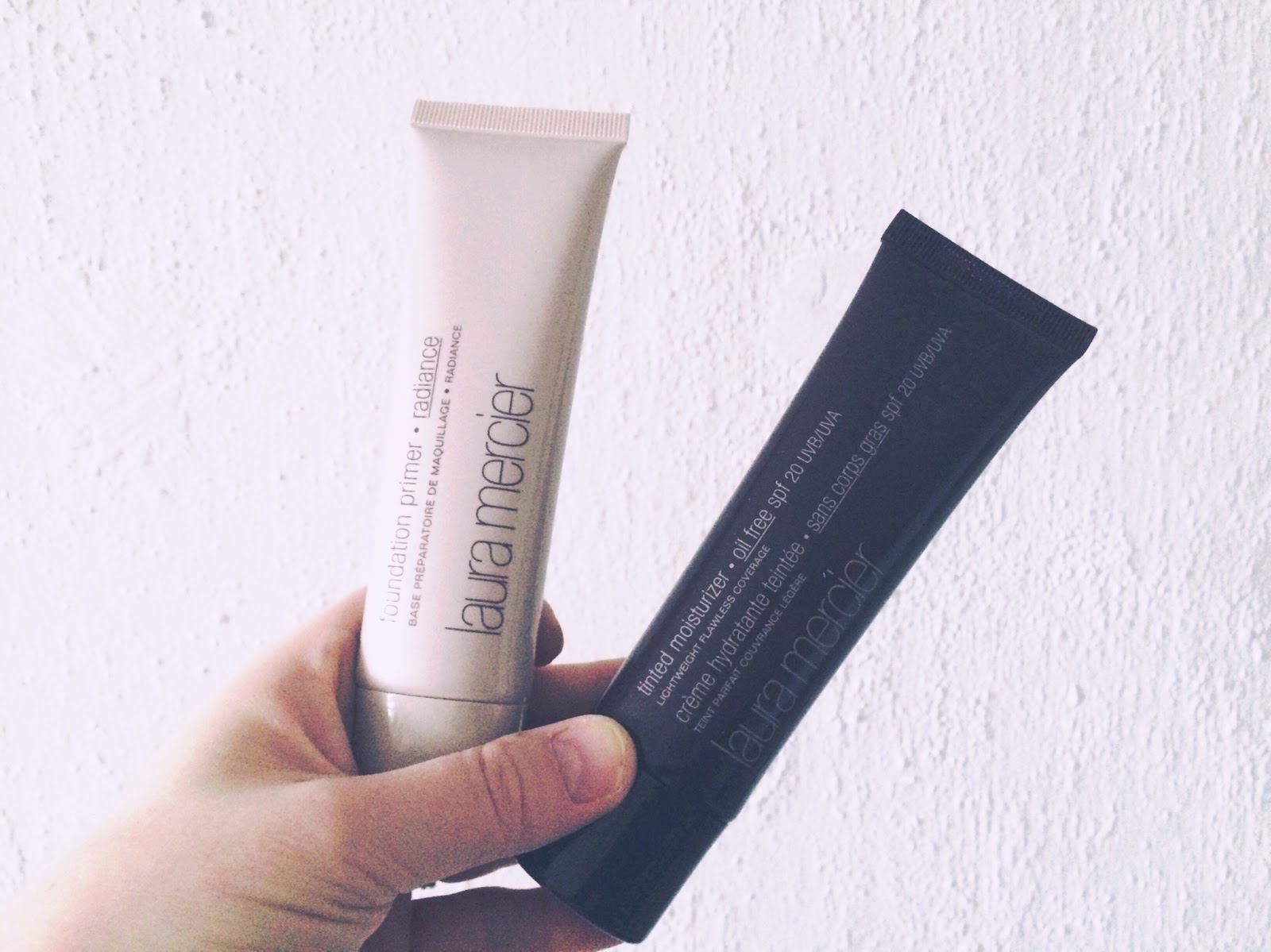 The is the second tube of the Laura Mercier Tinted Moisturiser I’ve picked up as I first bought it a few months ago and as I use it most days it’s almost run out.  I’m a huge fan of it as a light foundation – the lady in the shop recommended to me the oil-free version based on my skin type and I find it stays on for the majority of the day and offers a fair amount of coverage despite being labelled as a tinted moisturiser.  I’ve tried out several different foundations over the last year or so but I absolutely love this one as find that it’s very kind to my skin and gives a lovely dewy, glowing finish.  If I want more coverage I mix a little bit of the Estee Lauder Double Wear Maximum Coverage foundation in with it and use concealer in my ‘problem areas’ to give an even finish.  This is the perfect foundation for daily wear though, and the SPF means I can wear it all-year round without worrying about sun damage to my skin.

The Laura Mercier Radiance Foundation Primer was a new try for me.  It definitely lives up to its name in terms of giving a radiant, glowing complexion.  It works really well with the tinted moisturiser and you could even wear it on its own if you wanted a day without make-up as it smooths your complexion and makes your skin look luminous.  I have only used this for a few days, but I’ve definitely found that it made my make-up last longer – the other bonus is that I’ve found that you only need a really small amount, so hopefully this should last a really long time. 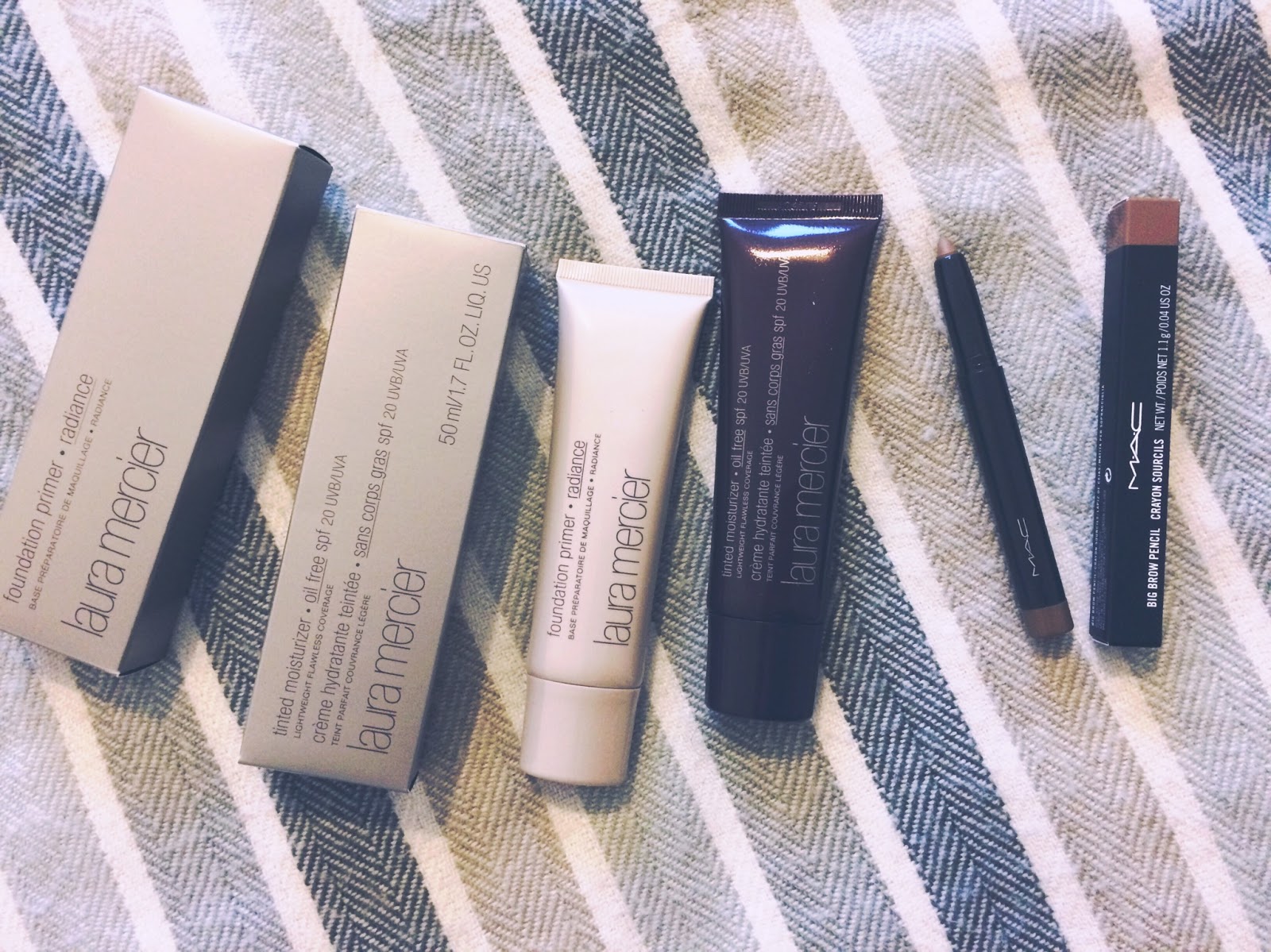 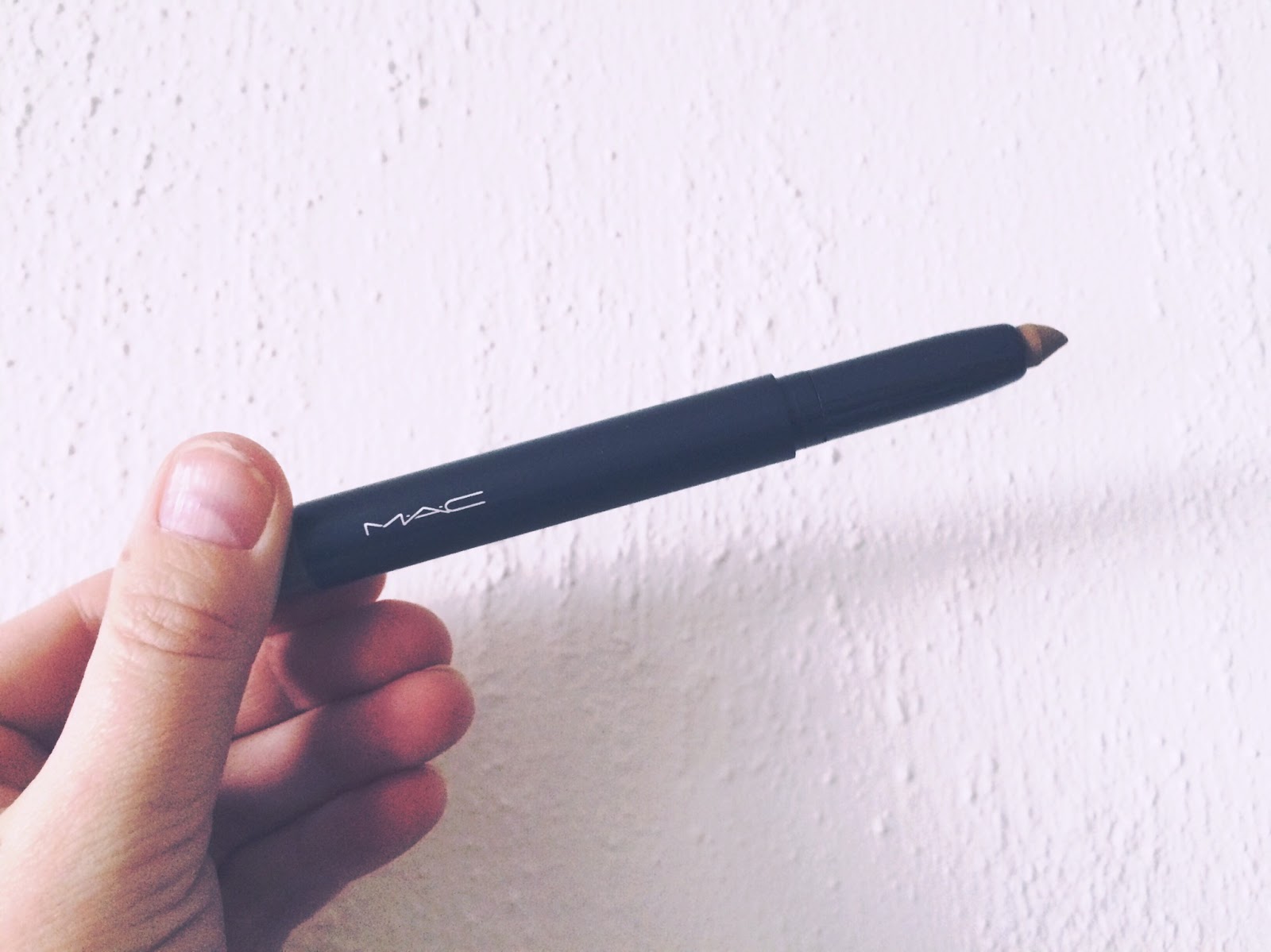 I also needed to pick up a new eyebrow pencil – I’ve been using the Make Up Revolution Ultimate Brow Kit on my eyebrows recently and I absolutely love it, but I’ve worn down the little pencil that comes with it and I really needed a new pencil to fill in my brows with.  I have a big gap between the beginning of my left eyebrow and the main bit of brow and I have to fill it in top stop it looking really weird! I love that the pencil on the Mac Big Brow Pencil is really ‘chubby’ and thick, meaning it doesn’t take long to create a full brow that’s easy to build up.  The pencil is a blend of wax and powder, giving it a long-wearing, blendable finish.  Again, I’ve only been using this for a couple of days but I’m really chuffed with it so far and it will work really well used in tandem with the Brow Kit.

My other recent purchase is a Nivea Post-Shave Balm picked up in my local Asda.  Don’t worry – I haven’t recently grown a beard, I’ve just seen so many people raving about using it as a primer that I had to try it! 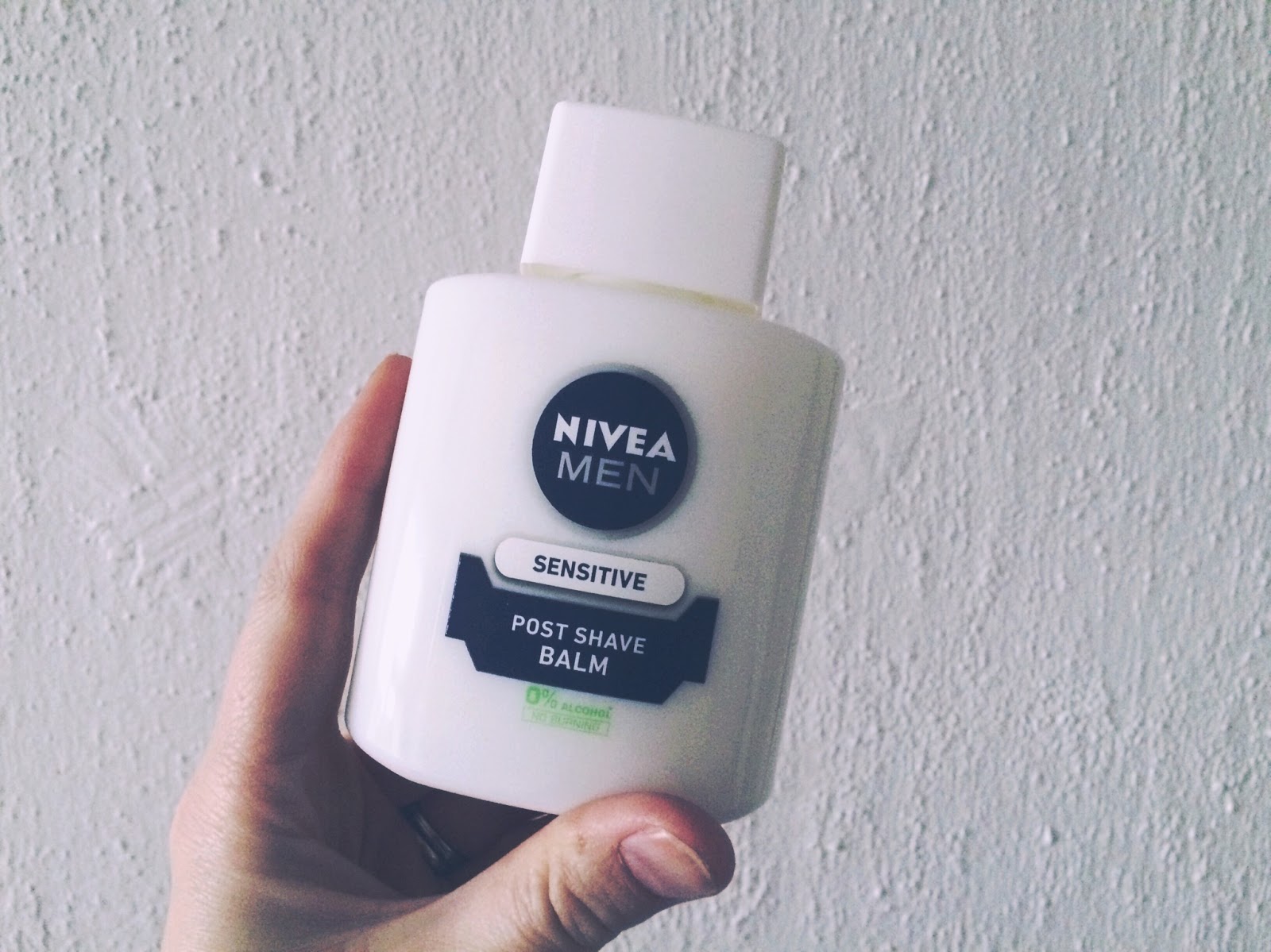 I spotted this recently on Kylie Jenner’s Snapchat, and it’s also been featured in the Daily Mail a couple of times due to recent claims that it’s a better primer than even some high-end products, and with a less than £6 price tag.  The reason it works so well is because of its high glycerine content, meaning that make-up placed over the top of it basically ‘glues’ to your face (you can however take it off afterwards, luckily!).  Beauty bloggers and vloggers have all been putting it to the test and getting great results after NikkieTutorials posted about it last year.  The balm is lightweight, smoothing, hydrating and colourless, so it shares many of the same properties as popular primers.  It feels very moisturising and kind to the skin – the reviews on Boots show that it’s as popular as a post-shave balm for women looking for a balm for irritated post-shaved skin (especially on sensitive areas like the bikini line) as it is for women trying it is a primer.

Of course an obvious observation is that it smells like men’s aftershave, though I don’t find that the scent lingers too long, and it’s hardly an unpleasant smell.  You put a small amount in your palm (though it comes out really quickly so watch out!), rub it together in your hands and then spread it across your face, paying particular attention to areas such as your nose, under eyes and chin, and then leave it to sink in for a minute.  It feels instantly cooling and soothing, and I have a feeling it will work wonders for my winter-ravaged skin and help to ease away any redness.  I’ve only used it for a couple of days but I’d say it can definitely compete with primers with much more expensive price tags (though you don’t smell like a bottle of Lynx for a short time when you’re applying Benefit Porefessional of course!) I’ll definitely be keeping a couple of bottles of this in the house from now on – it’s a shame it comes in such a heavy, chunky bottle but I guess you could decant it if you were going on holiday or away for the weekend.  I’m going to carry on using it and report back again in a few weeks as to how I get on with it, but early indications are that this could definitely be a permanent feature in my make-up bag!

Have you picked up any new beauty products lately?