A couple of weekends ago we hopped on a train to London to stay at the citizenM hotel at Bankside, mooch around London and meet up with some friends.  We arrived into London mid-afternoon, and with a selection of train snacks not being enough to satiate our appetites, we decided to head out for a late lunch.  We had seen Franco Manca featured in citizenMag (the citizenM magazine, in case you hadn’t guessed) and being die-hard pizza fans, we thought it sounded like just the place to while away an afternoon with some delicious sounding food and drink. 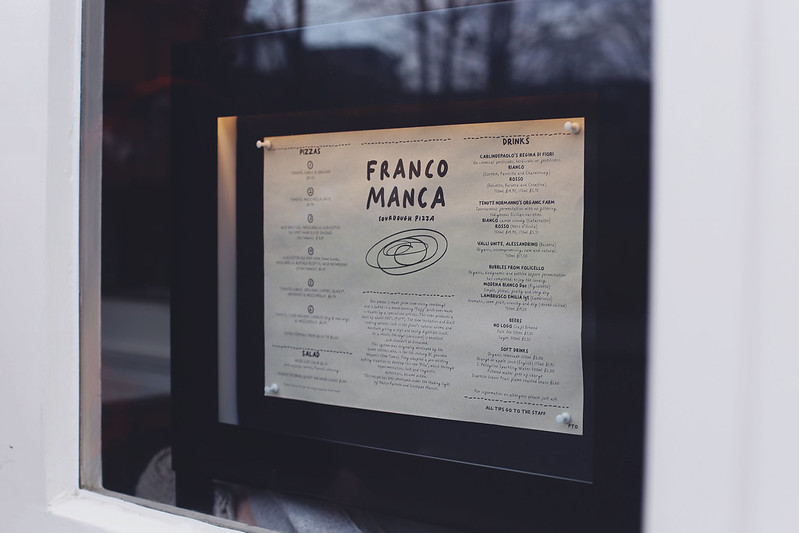 Franco Manca have 19 restaurants across London, including one in Westfield Stratford Shopping Centre.  Their pizza is made from sourdough that is left for a minimum of 20 hours to slowly rise, and then cooked in an authentic wood burning ‘tufae’ brick oven made on site by specialised artisans from the homeland of the pizza itself, Naples.  Franco Manca have pizza making to a fine art – or science even, as each pizza oven has to be an exact dimension to get the heat and humidity right; a fine balance that ensures the pizza doesn’t burn, the crust is light and chewy and the toppings gooey and cooked to perfection.  Because the oven produces a heat of 500 degrees celsius, the pizzas are only cooked for around 40 seconds.  It’s clear that Franco Manca take pizza making very seriously indeed, and I for one could not wait to taste the fruits of their labour. 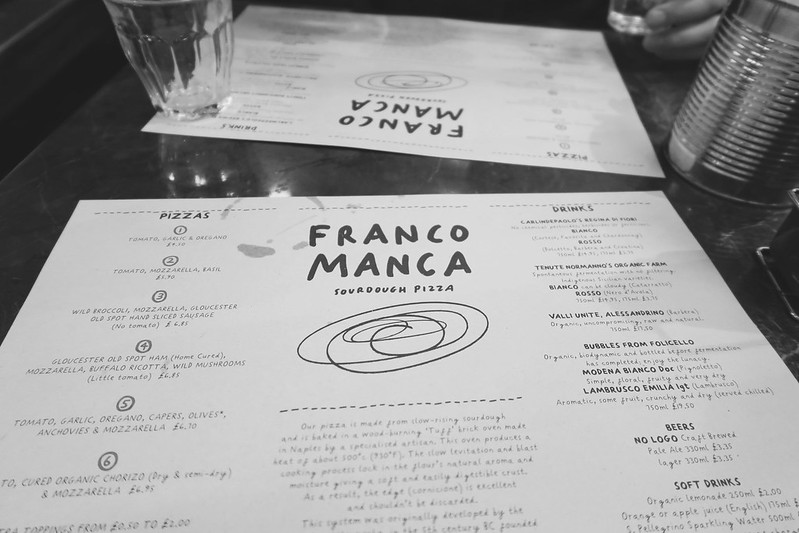 We were told that most of the Franco Mancas tend to get quite busy around peak times, particularly the ones on Tottenham Court Road, Covent Garden and Brixton Market, and that you often have to queue.  We arrived about 4.30 and it was still relatively busy, but we were shown to a table straight away.  We were originally given a small table near the front door, but the waiter then offered us a quieter table near the back of the restaurants which we gratefully opted for.  (They really do cram the tables in though, so you might have to accept being elbow to elbow with another pizza lover!) 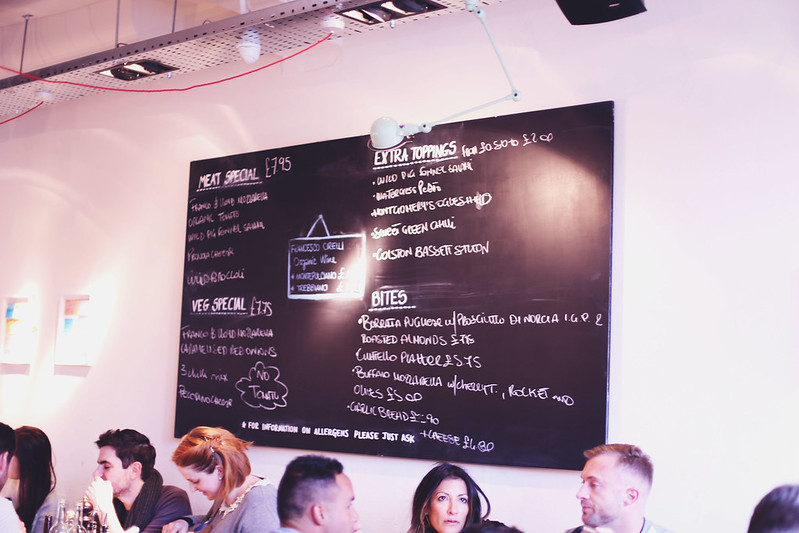 There are six pizzas on the main menu, with delicious sounding ingredients like Gloucester hand sliced sausage, buffalo ricotta, cured organic chorizo, wild broccoli and mozzarella.  As well as the six pizzas, there’s always a Meat Special and a Veg Special.  I opted for the Meat Special – Franco and wild mozzarella, organic tomato, wild pig fennel salami, provola cheese and wild broccoli.  Tom went for the same (copycat).  They also had a selection of ‘bites’ and we went for the burrata pugliese with prosciutto di norcia and roasted almonds.  Burrata is a fresh Italian cheese made from mozzarella and cream – the waitress described it as having a soft exterior with the inside much more creamy and goo-ey (I was sold) 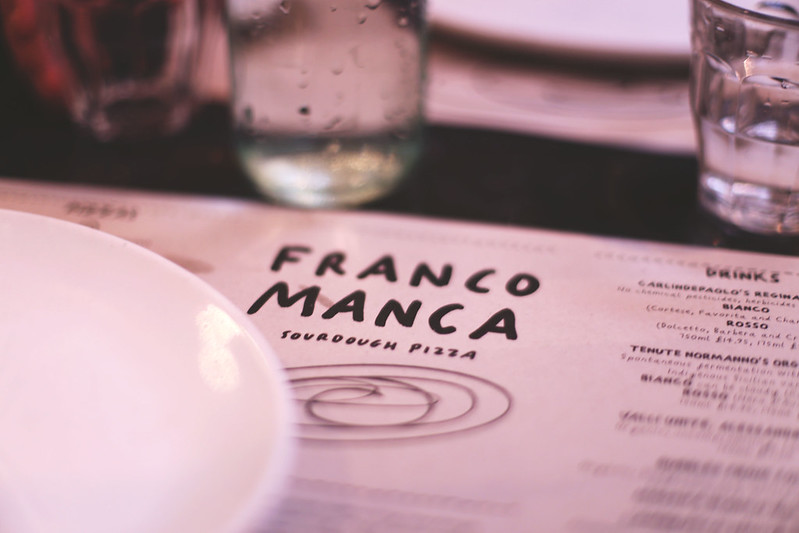 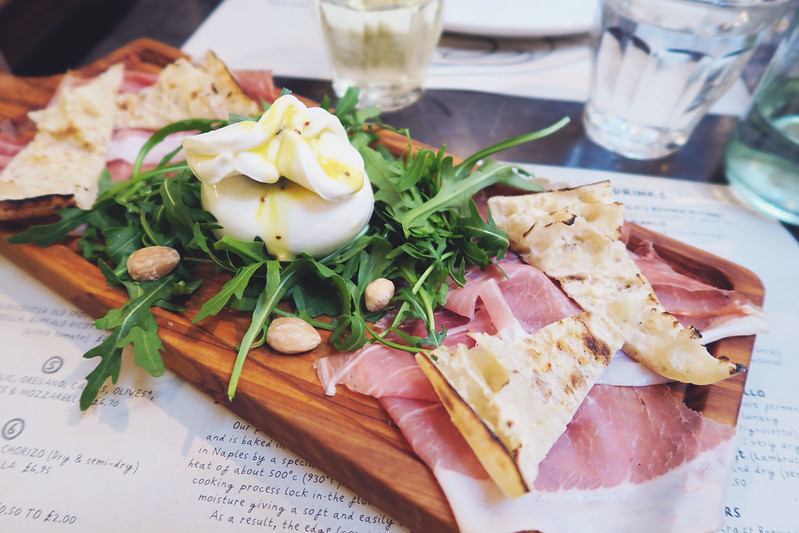 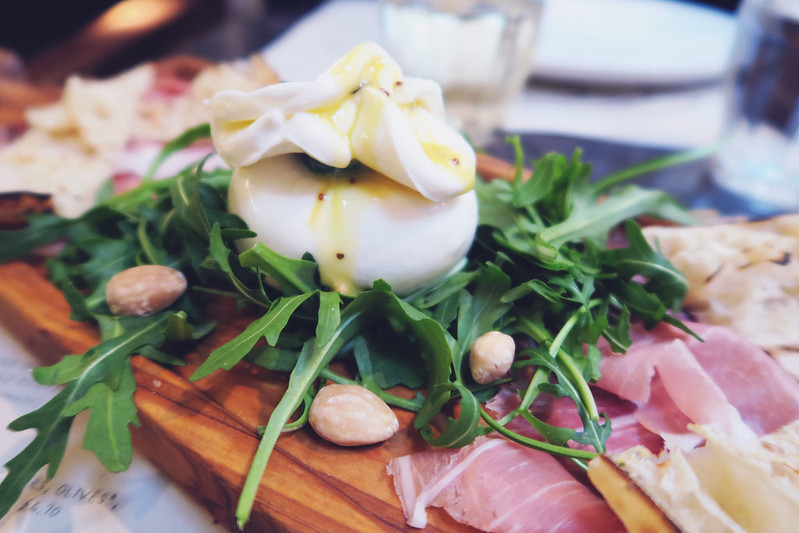 The burrata board was big enough for both of us to share and cost a very reasonable £7.75.  True to the waitresses description, the burrata was absolutely delicious – when we cut into it the inside just leaked out and was so butter-y and rich – perfect accompanied with the rocket and prosciutto.  The cured meats served at Franco Manca are sourced from an organic estate in Tuscany, the mozzarella comes from a little closer to home in Somerset and the other meats are from Gloucestershire.  These selections are not just by chance, but have all been chosen with the best fare in mind, with the tomatoes sourced from a cannery in the mountains next to Naples to ensure that authentic taste.

As well as our starters, we also ordered a glass of wine for me (£3.75) and a bottle of craft-brewed pale ale for Tom (£3.35).  My wine came in a little tumbler and again, was very good value for what was actually a really nice glass of wine.  You can get a bottle for a very reasonable £14.95; so you really can have a delicious meal and a bottle of wine without breaking the bank. 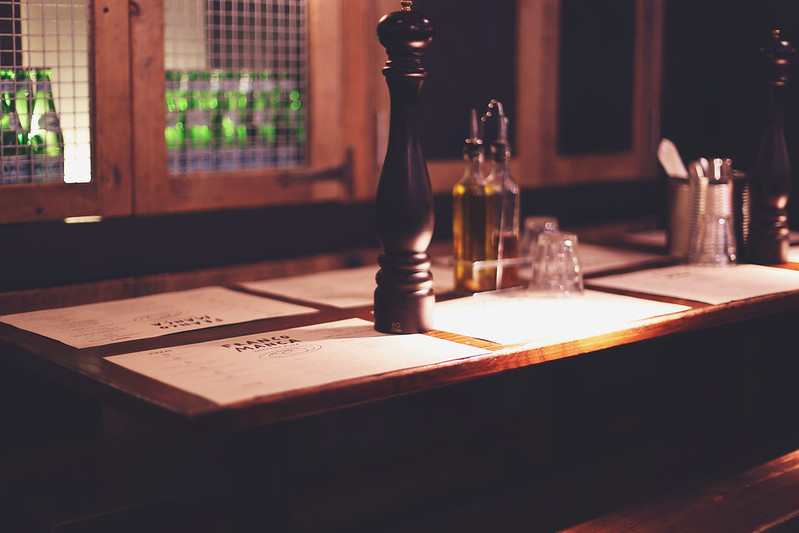 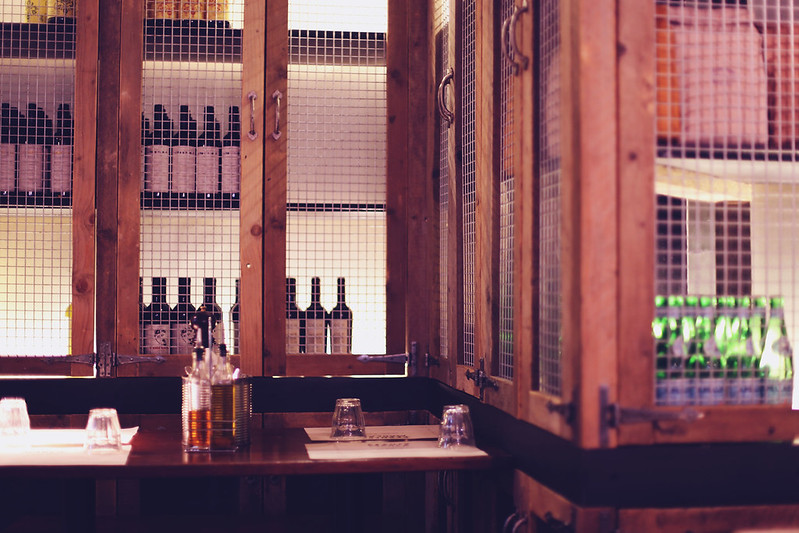 Our pizzas arrived not long after the empty plates from our starters had been whipped away.  I was very impressed by the size of the pizzas considering they were only £7.95 each (that wouldn’t get you much in another pizza chain, let alone in central London).  True to their description, the dough was chewy and tasty, the cheese the perfect mix of melted and soft and the toppings all complemented each other perfectly. 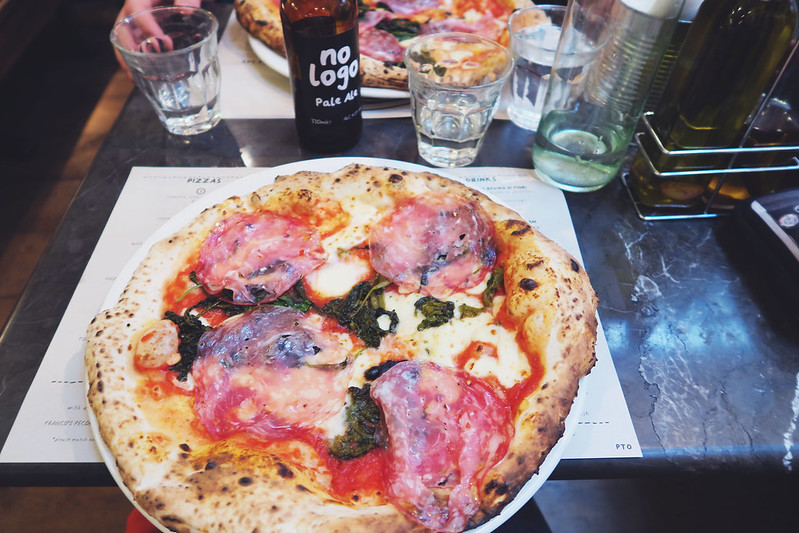 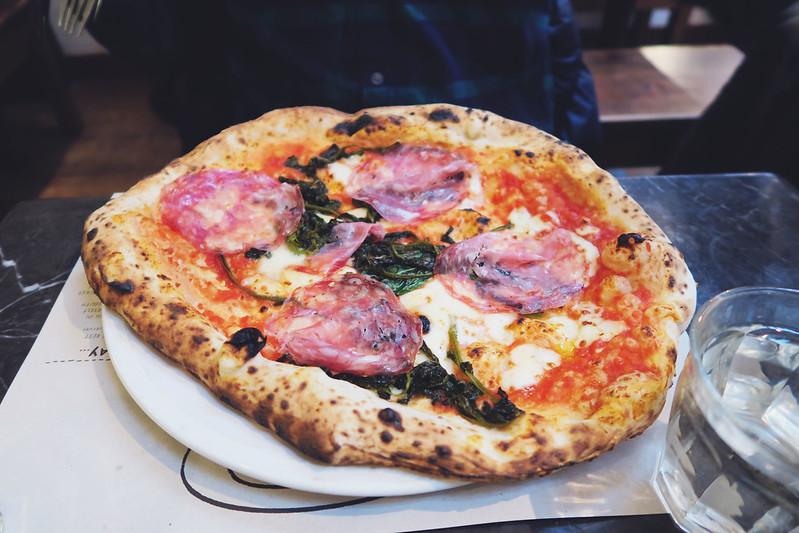 I’m a bit naughty and I usually leave the crust on pizzas, but Franco Manca say that the charcoal-flecked edge (‘cornicone’) is excellent and shouldn’t be discarded, and who am I to argue with people who are clearly so passionate about pizza? (They were right – it was delicious).  I fancied another glass of wine but by now it was starting to get busy and the waitress was running from table to table trying to keep up with the many pizza-hungry clientele and I couldn’t get her attention, so we decided to go back to our hotel for a drink.  My only complaint about Franco Manca is that it really is a victim of its own success – once it got busier the service got a little slower and I did feel a little we didn’t want to outstay our welcome with people starting to queue at the door; but with pizza this good it’s unsurprising that there would be others keen for your table! 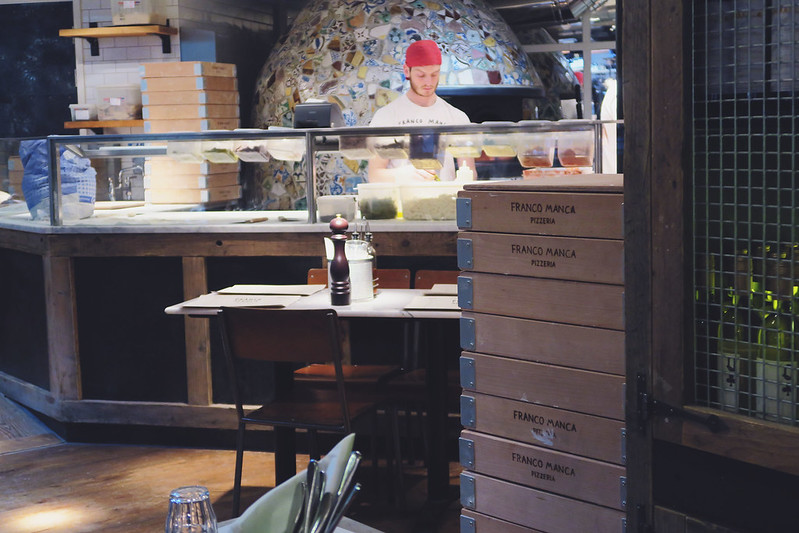 All in all I was incredibly impressed with Franco Manca – it was excellent value and I must say, probably the best pizza I’ve ever tasted (and I have tasted a lot of pizza and don’t make this statement lightly).  Tom loved it so much he took some colleagues there for a second visit last week, and they were similarly enthused about the food and wine (and the value for money).  I’d go there again in a heartbeat and I hope they consider rolling them out a little wider (though their pizzas are definitely worth making a trip to London for).

Have you visited Franco Manca?

I visited Franco Manca as part of my collaboration with citizenMag.   All opinions are my own.


You may also enjoy: