When we decided on Bali for our honeymoon last year, I was surprised by how many people mentioned to me the epidemic of stray dogs in the country, and worried that I would be upset by seeing so many dogs who were homeless and searching for food.  Seeing animals suffering is a real emotional trigger for me – I consider myself to be quite a resilient person and rarely get upset by things, but especially since having Bodhi I find that I just want to look after animals and care for them.  Dogs especially are so innocent and loving that it’s hurtful to see them not being looked after.

When we arrived in Bali, I must admit that I was surprised by just how many stray dogs there were roaming the streets and beaches.  The dogs often look quite similar – the traditional Balinese dog is a mix of Australian Dingo, Chow Chow and Akita.  Until 2004, no dogs were allowed into Bali and so the breed of Bali dogs remained pure, but since then, there has been an influx of other breeds, and you can see lots of different types of dogs around the island. 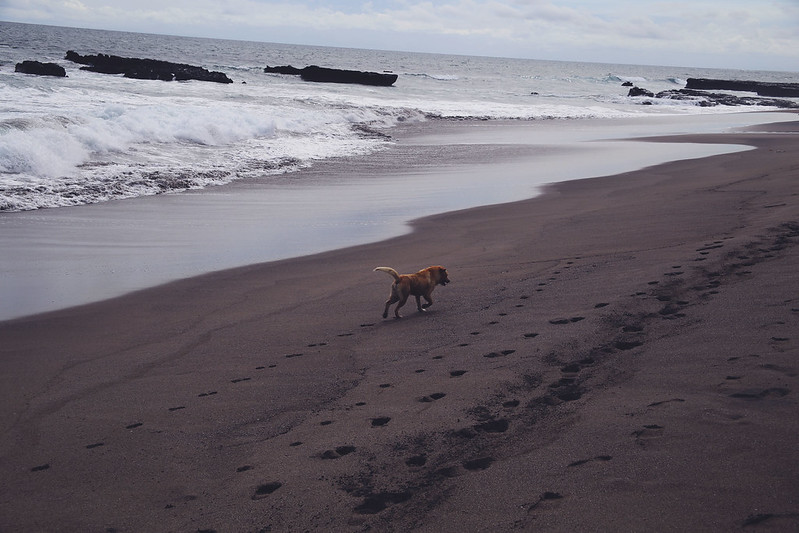 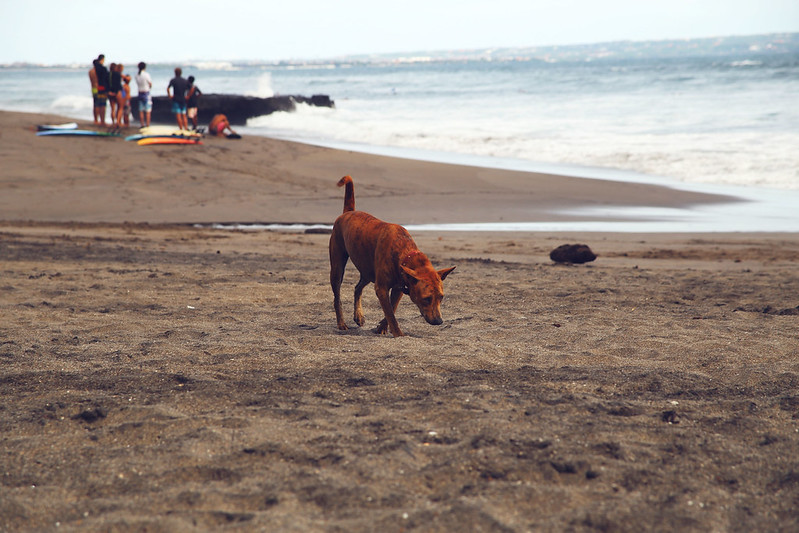 Although the dogs seemed to be strays, I was surprised that many of them didn’t seem malnourished, and often looked happy and well-fed.  I asked a Balinese lady who we met whilst staying at a holiday cottage and she explained that whilst the dogs often don’t have clear ‘owners’, they are often fed by people in small communities in Bali, and they often keep coming back to the same families or shops. She told me that the majority of people who live on Bali are Hindus, and that their kind nature means that they often look after dogs.  (It probably helps that Hindus make daily offerings which are left on the streets, and these often contain things like sweets or other food items that are then naughtily eaten by the dogs!) 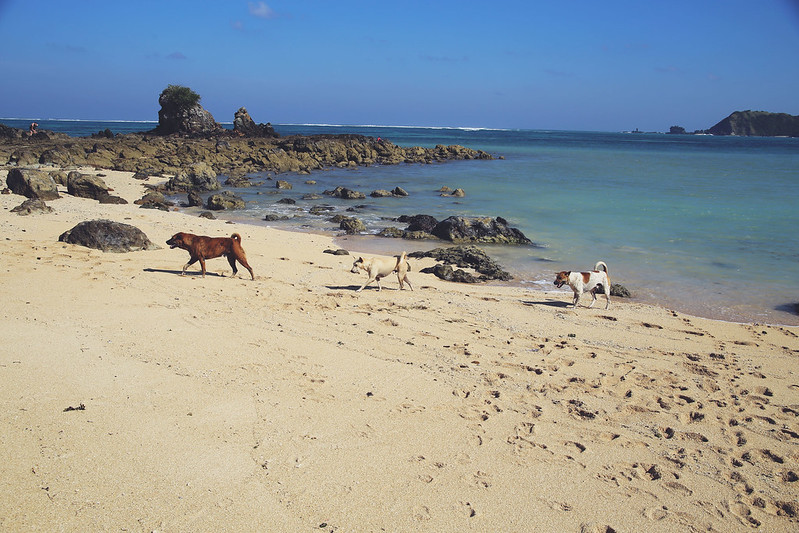 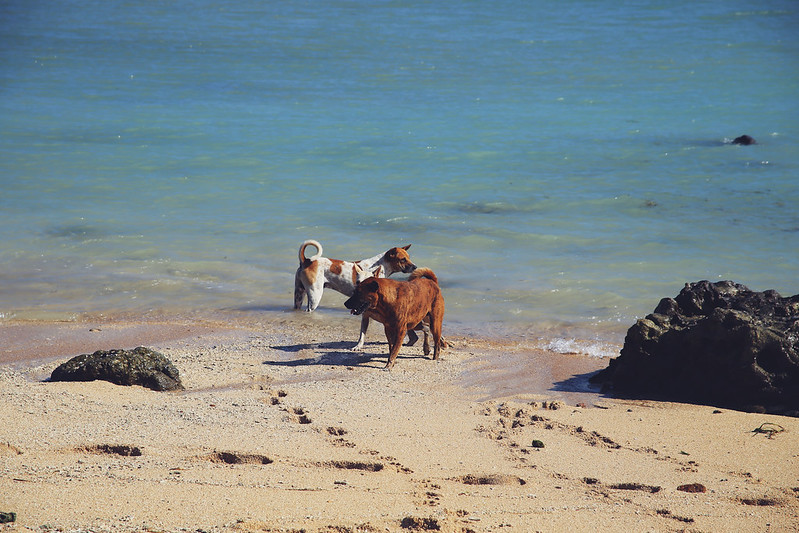 Many of the dogs seemed to move around in small packs.  This didn’t feel threatening to me, it actually just seemed like they had their little gangs and they were happily plodding around with their friends.  None of the dogs I met or saw were aggressive, they all seemed happy in their only little worlds, cooling off in the sea or snoozing in the shade.

I met my favourite dog snoozing under a building on stilts at Balangan.  It was black and fluffy but constantly covered in sand (especially his little black nose!) 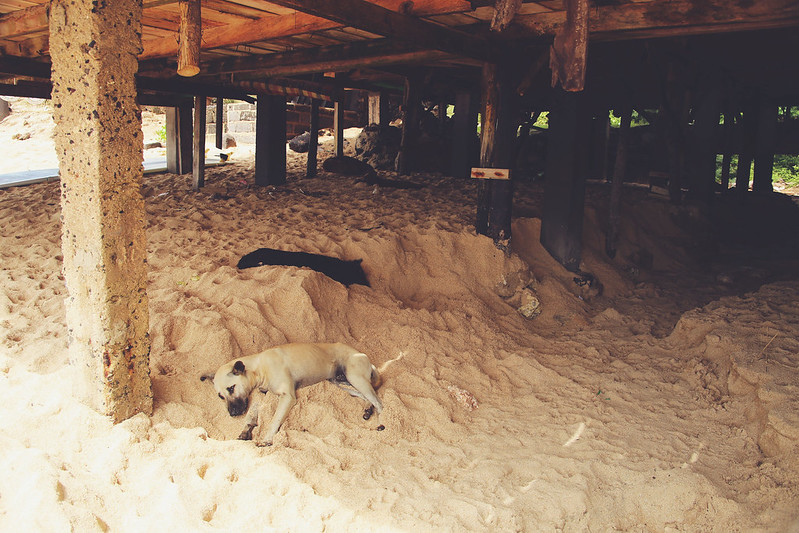 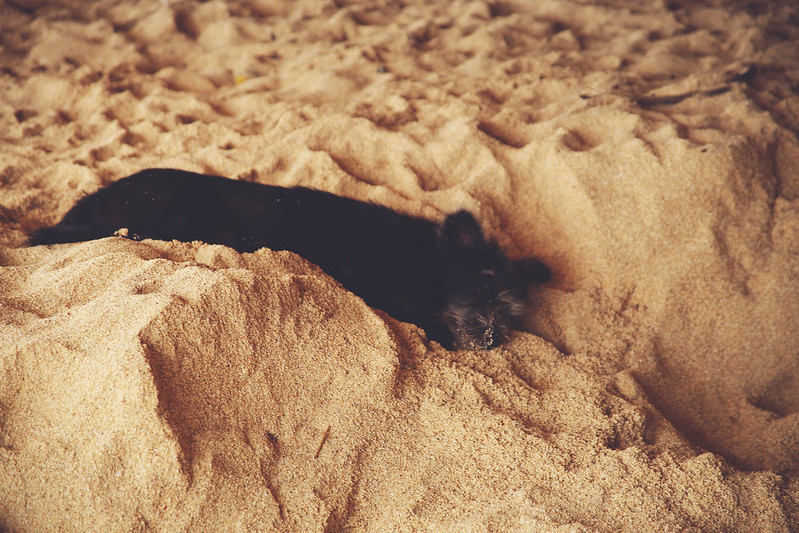 Everywhere we went in Bali, there were dogs.  After taking photos of all of the dogs we met, Tom said I should start a spin off blog called ‘Dogs of Bali’.  He then pretended that every dog we came across was trying to get their photo taken for the Dogs of Bali blog.  This one put in a lot of effort as we found him at the top of Mount Batur, after several hours of hiking to the top.  He was surrounded by greedy monkeys trying to steal everyone’s breakfasts (he didn’t seem to mind). 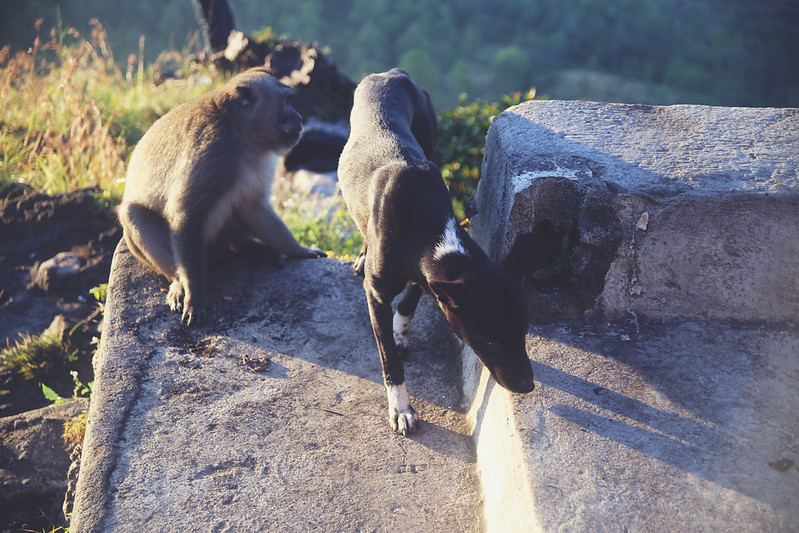 Our last stop before we came home was Balian.  I was missing Bodhi like crazy by the time we got there, so I was secretly pleased to see so many dogs lolling on the beach – there was even a dog that lived in the hotel and belonged to the owners; he liked walking around the bar trying to get as many strokes as possible! 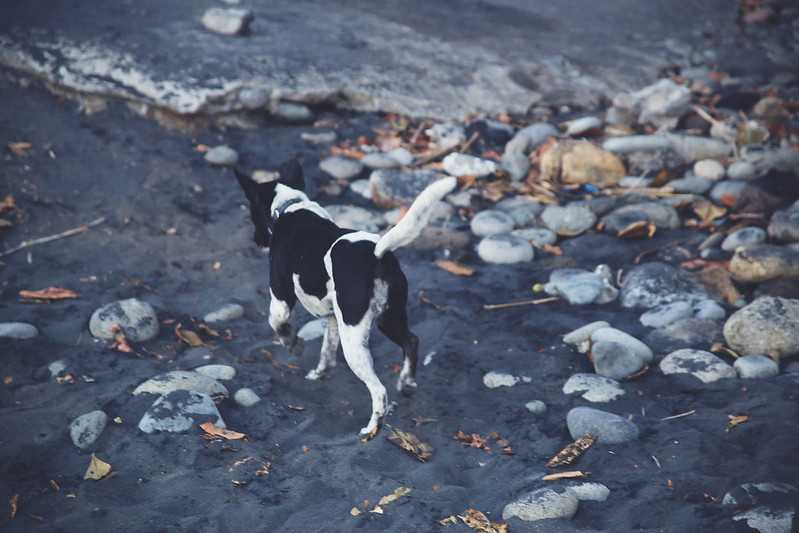 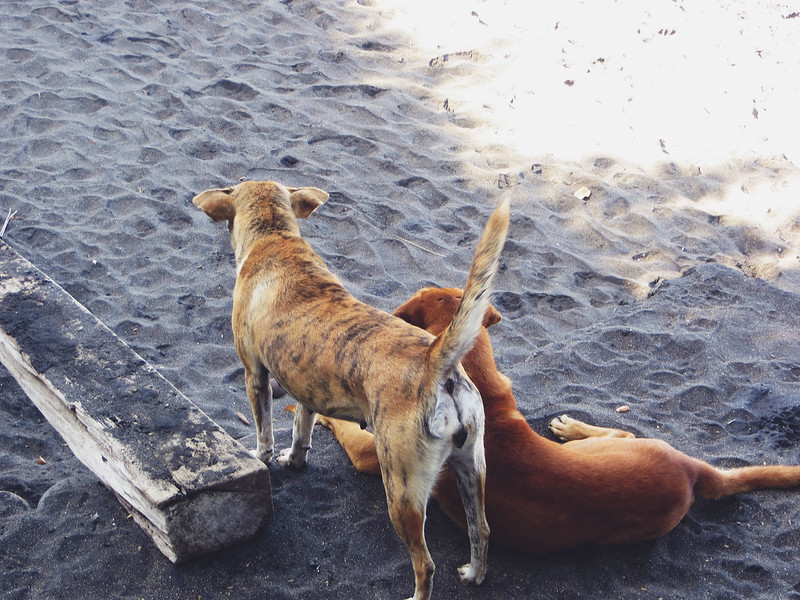 Tom spent a lot of time surfing whilst we stayed here, so I made friends with this dog on the beach to try and alleviate my boredom.  We played a lot of games of fetch with coconut skins! 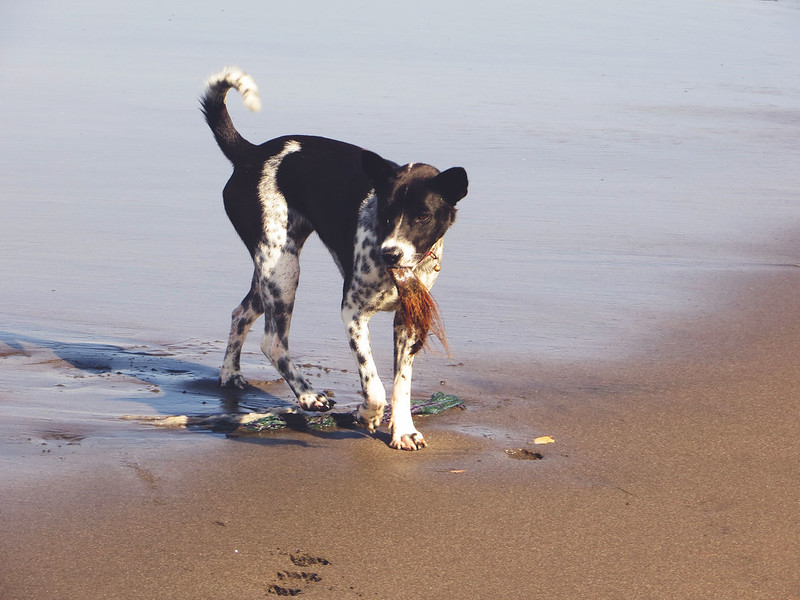 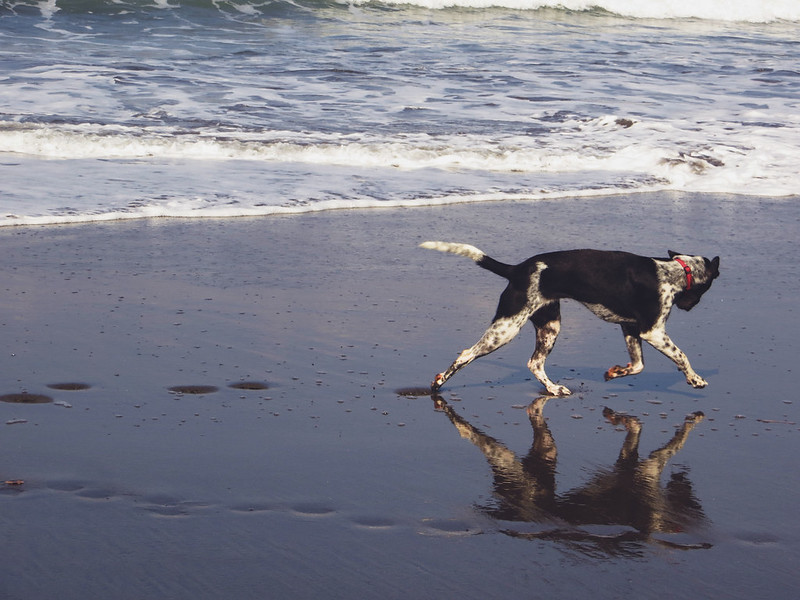 Sadly, of course not all of the dogs in Bali are well looked after, and cruelty towards the dogs does happen.  The Balinese government is incredibly wary of incidents of aggression towards tourists, and of the spread of rabies, and so there are sometimes reported culls of dogs from the streets in popular tourist spots.  The dogs also risk being hit by cars, getting illnesses or disease, or not being fed and watered.  Several charities on the island work to look after these dogs – the one I heard about whilst I was there was BARC – the Bali dog Adoption and Rehabilitation Centre.  You can learn more about their work and make a donation to their charity if you so wish on their website.  We looked into whether we could volunteer to help BARC whilst we were in Ubud, but as we were only there for two days we just weren’t able to – I’d imagine it’s incredibly rewarding though and something I’d definitely do if I was going back for longer.

Whilst in Bali we visited the Gili Islands for a week or so.  They’re such small islands that there are no cars or motorbikes – but also no dogs! Some people saw this as a win but I was disappointed to not be around doggies for a few days.  On the Gili Islands however, there are a lot of cats (though none of the cats have tails – weird).  This one hopped up onto Tom’s lap whilst he was eating his lunch one day and I thought I’d pop this photo in too – just for all of the cat lovers out there… 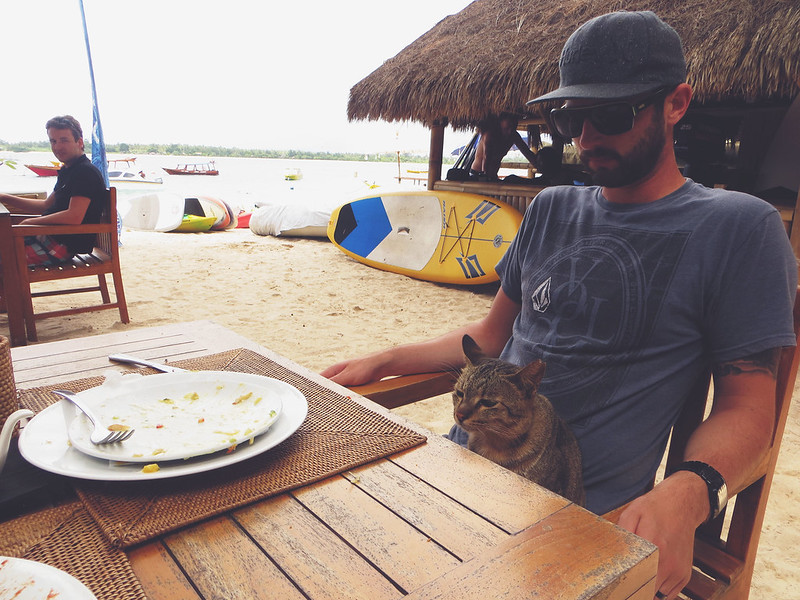 Now I’ve sorted all of my photos from Bali (and prioritised blogging about the dogs I met – ha!) I’m going to share some more posts from my Bali adventures, so do let me know if there’s anything in particular you’d like me to blog about.  In the meantime, go and find a dog and fuss it.  Dogs are the best.