There comes a point at which a spa day is no longer a little treat popped in the diary as something to look forward to, and instead turns into something which is absolutely necessary due to your general emotional state.  This point may come just before you’re about to go into multiple job interviews at work, and are in the final, stressful stages of selling your house (got the job, lost the house, FYI.) And so it was, that a few Saturdays ago, I found myself getting ready to make a trip to the eForea Spa at the new Bournemouth Hilton Hotel, knowing that total relaxation was just what was needed.  I was just digging out my bikini when my phone rang.  It was Tom, who started the phonecall with my least favourite eight words – “Try not to worry, but I’m in hospital”.  It transpired that on Tom’s morning surf, his surfboard had gone rogue and hit him in the face, meaning that he had a bit of a hole in his face and had to be stitched up.

Luckily, Tom realised just how much I needed this spa day, and gamely came straight to the hotel from the hospital. Unfortunately this meant that we arrived too late for my booked Bournemouth Bliss massage (a treatment that includes a foot massage, deep tissue massage and a facial) but the spa were really accomodating and found another treatment that perfectly fit the time we had left.  The week before my spa visit I’d come to the Bournemouth Hilton for a tasting evening at their Schpoons and Forx restaurant, and when I arrived I was reminded just how stunning the interior of the hotel was.  Even the lobby is ridiculously cool. 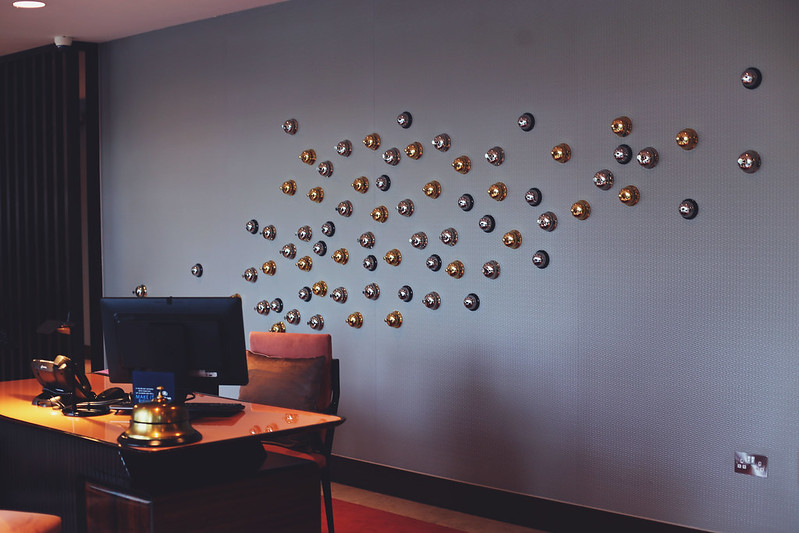 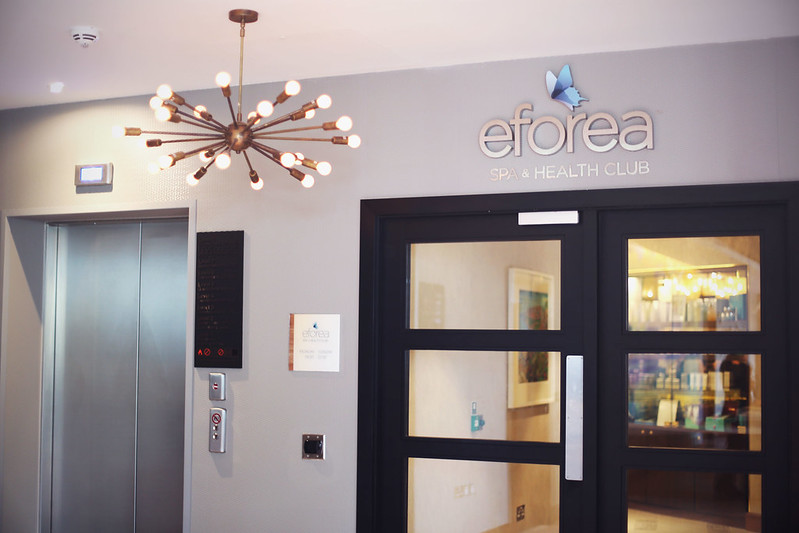 When I entered the spa, I instantly felt relaxed.  I absolutely hate being late, and turning up half an hour late for a booked appointment with a post-hospital husband in tow meant that I was more than a little bit a bit on edge when I arrived at the spa reception. The spa staff were really understanding and we went through the various treatments to select one that could be done in the time that was left (the one we chose also came with afternoon tea, which was a bit of a win!) Tom went off to relax by the pool and I was taken into their treatment rooms for a massage.  I was treated to an exfoliating scrub, all cleansed off with an Elemis cactus bristle body brush.  I then had the most wonderful all over body massage – it was so soothing and calming and just what the Doctor ordered; it definitely helped iron out all of the tension I’d accumulated through the stress of the house move and job pressure. 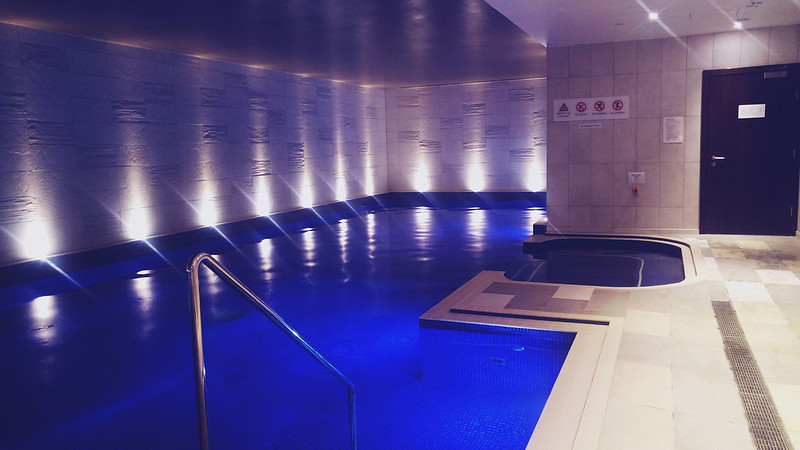 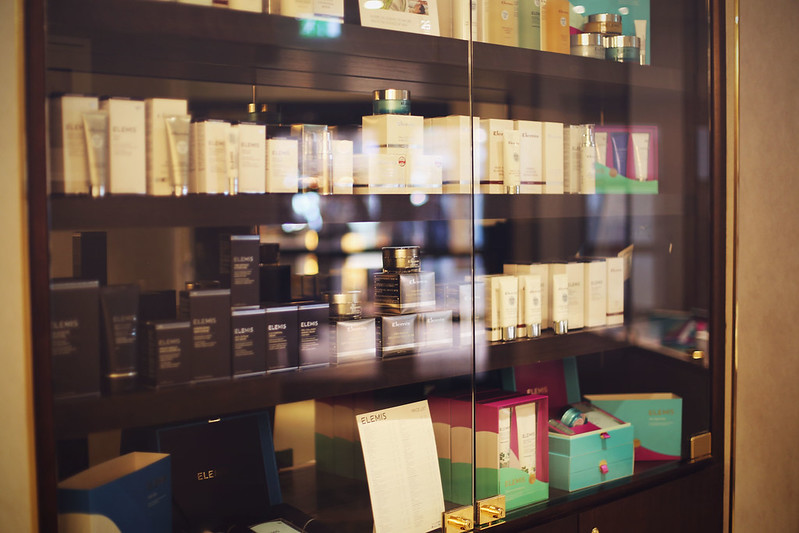 I came away with some Elemis treats and a list of recommendations to soothe my winter chilled skin (I have a lot of patches of dry skin at the moment, but the therapist has given me some great suggestions of products I can use to alleviate my scaliness, including an Elemis Milk Bath that can also be used neat on the skin that’s now high on my wishlist). After my treatment we lay by the pool for a little while, as well as checking out the sauna and steam room.  All that relaxing meant we were a little peckish, so we decided to head to the Schpoons and Forx restaurant for a light lunch.  The lunch menu was just as impressive as the dinner I had there with some other bloggers a few days before – it really is a must visit if you’re looking for a new eatery to try in Bournemouth.

After lunch we were given a tour of the hotel.  The hotel prides itself on its quirky, trendy interior, and I was totally wowed by all of the rooms and conference areas (I’m saving a lot of my photos for house inspiration whenever we finally do move, as the design really was truly breathtaking).  The bespoke interiors and furnishings were designed by Ted Baker founder Ray Kelvin, and you can see his creative stylings throughout. The hotel has eight meeting spaces, and the conference areas are just as stunning as the rooms – I’m now frantically trying to think of something I need a meeting space for just so I can hang out there for the day. 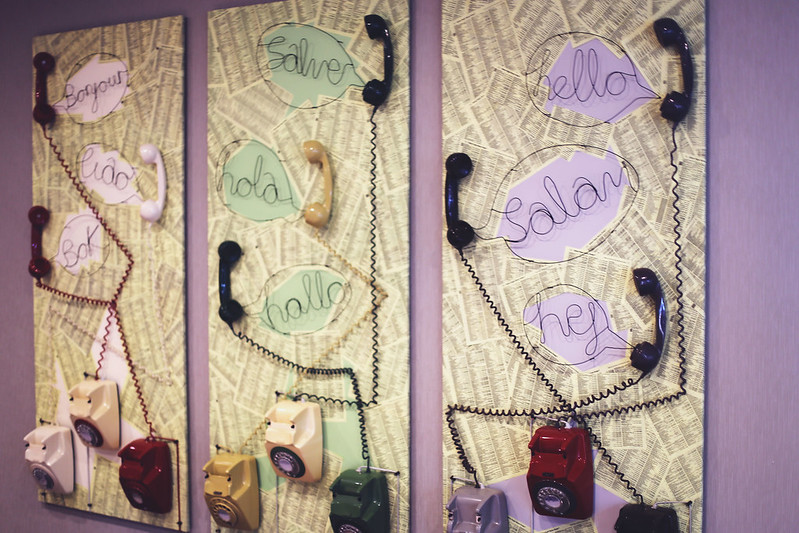 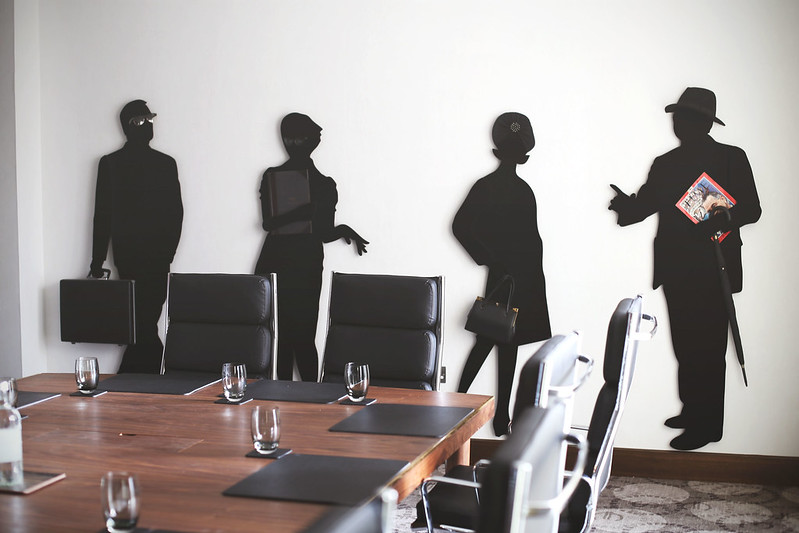 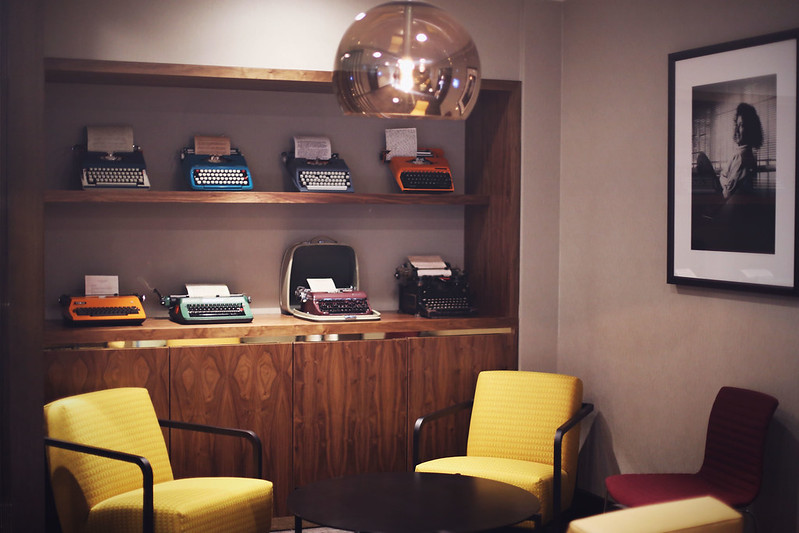 All of the meeting rooms were themed – this one was called Just In Time (I think?) and had lots of cool vintage clocks and a telegram machine on the wall (it would definitely give you something to look at during a boring meeting – and how cool is that wallpaper?) 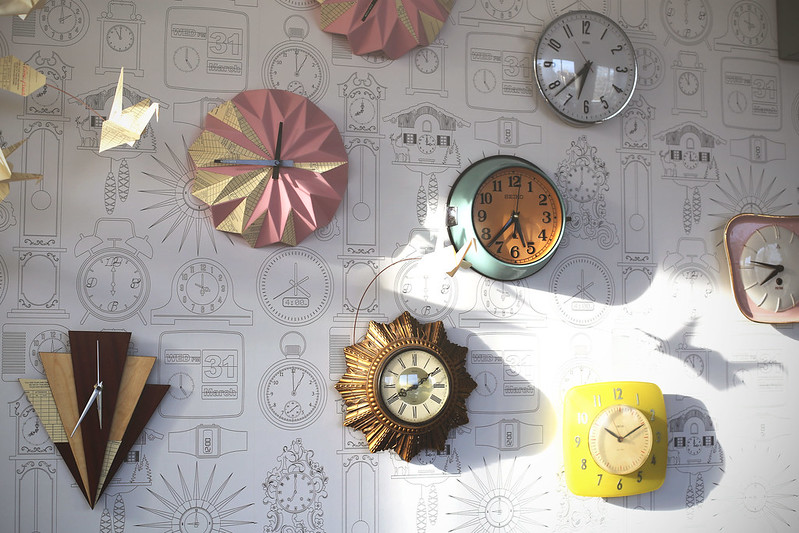 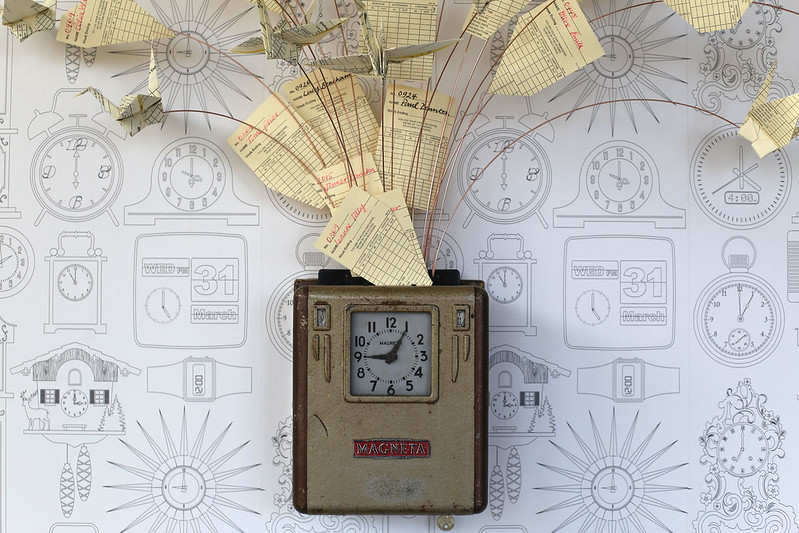 Having seen these photos it’s probably no surprise that the hotel rooms themselves were a sight to behold.  I was close to having to be forcibly removed from the room, I definitely need to find an excuse to stay there overnight soon! 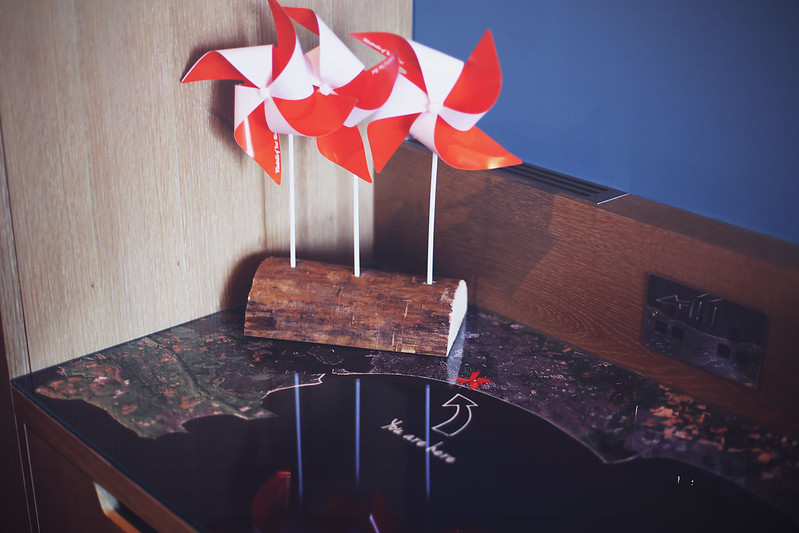 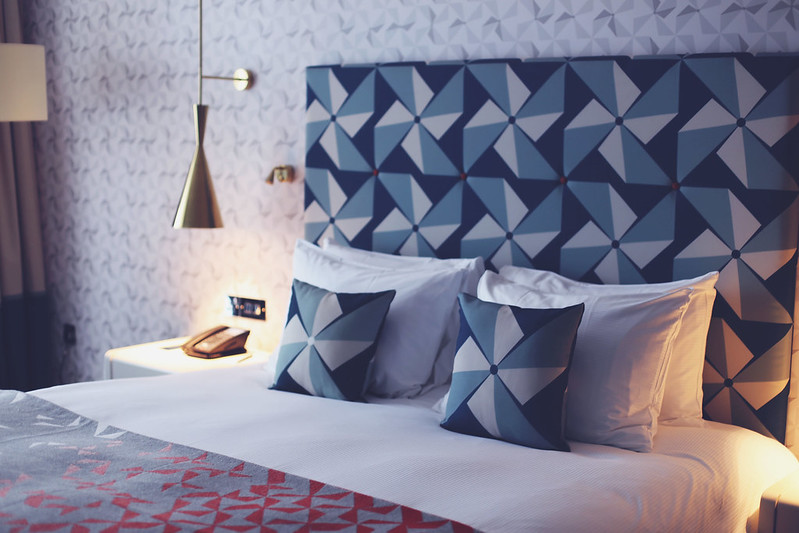 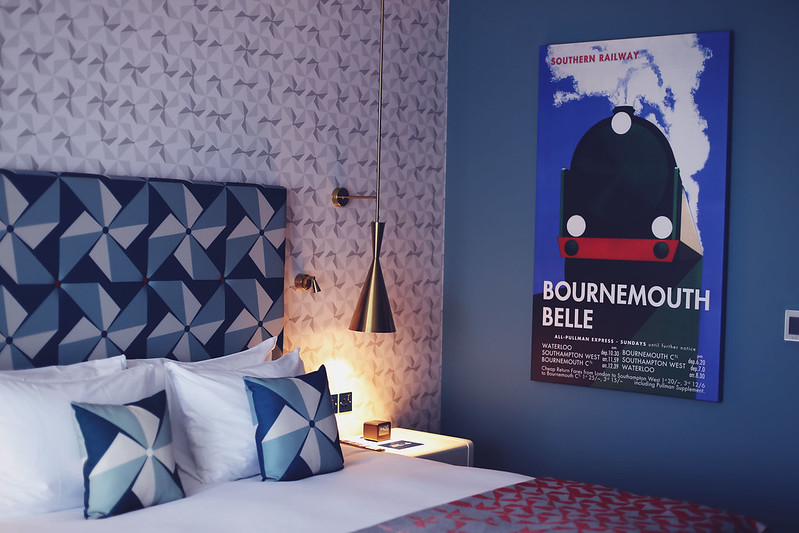 I just adore all of the quirky prints and the thought that has clearly gone into styling the hotel.  Of course I had to have a peek in the bathroom – a swish bathroom is always a deal breaker for me in a hotel, but luckily this one was no disappointment.  How stunning are those tiles around the bath? Swoon. 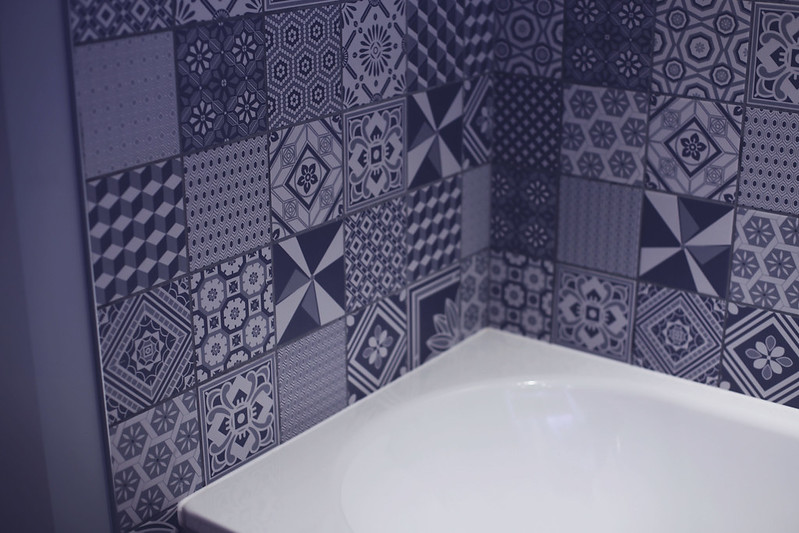 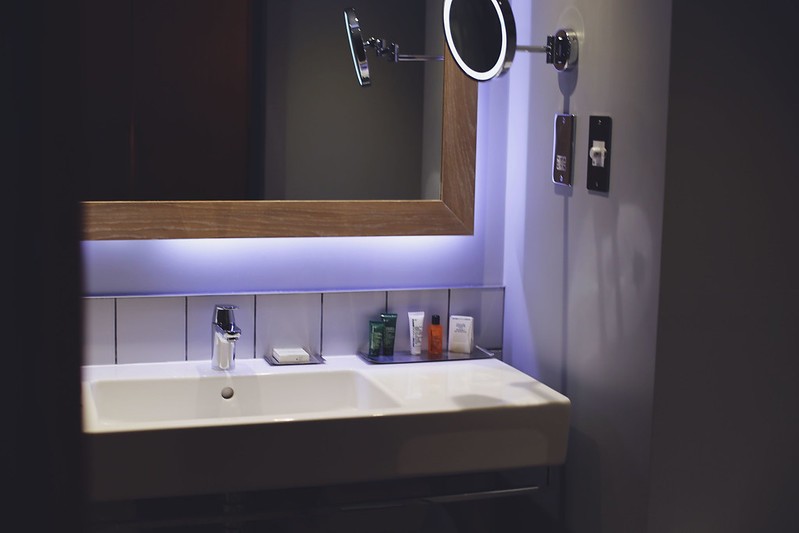 I took so many photos but I won’t bore you with too many more or this post is going to get very, very long – I’ll just say that it’s a definite must visit if you’re coming to stay in Bournemouth.  All of their guest rooms have king size beds and 49-inch HD TVs (I have a feeling that all I would end up leaving the room for was to go to the spa!) Rooms are typically around £110-120 a night, which I think is really reasonable for a hotel that feels extremely swish and would be a really special place to stay.

After our tour we returned to the restaurant (we must have looked like the greediest guests ever!) for our afternoon tea.  Unsurprisingly, their afternoon tea was as quirky and as polished as the hotel, and it arrived in this sort of wooden box, shelf arrangement – with sandwiches, truffles, scones and cakes that I couldn’t wait to try.  The hotel has an in house pastry chef, so the scones and cakes are all handmade on site, and you can definitely taste the difference – this is not your average hotel afternoon tea! The chocolate truffles were to die for, and the whole spread disappeared very quickly. 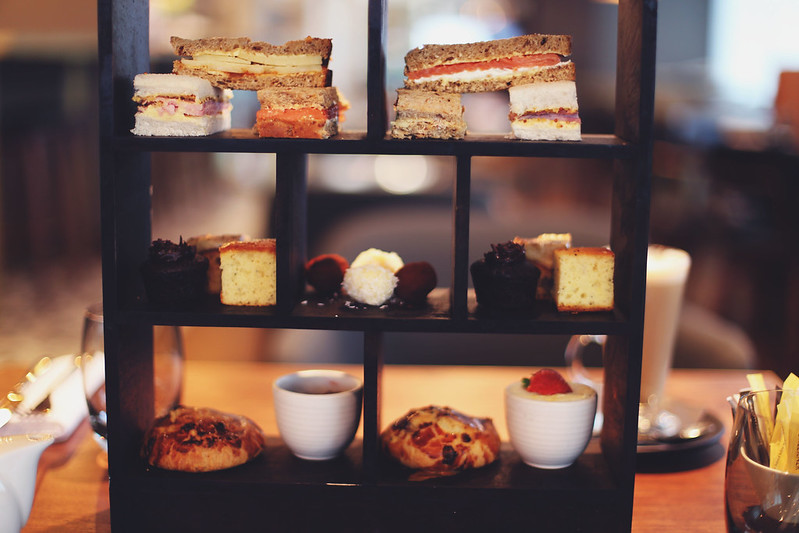 With happy bellies and a feeling of total relaxation, we left the hotel feeling on cloud nine.  I’m already planning another spa day, and Tom is desperate to go back and have dinner at the restaurant.  The Hilton Bournemouth is hands down one of the nicest hotels I’ve ever visited, and I can’t wait to go back.


You may also enjoy: