A few weekends ago we went to the most perfect, beautiful wedding in the Wiltshire countryside.  It was such an amazing day for many reasons – firstly it was the wedding of one of closest friends, Becki, and secondly – well, you’ll see why once you scroll through these photographs.  Becki did a Fine Art degree and is a keen artist, crafty person and sewing extraordinaire, so I just knew her wedding was going to have lots of pretty details and finishing touches, but I wasn’t prepared for just how breathtaking it would be.  I took along my camera and Becki kindly agreed to let me post my photographs of the day on here – I couldn’t not share them!

Becki and Joe’s wedding was held in Joe’s parents’ garden (more of an estate than a garden), at their house near Marlborough.  It really was an utterly stunning location for a wedding, and the weather was just perfect for an outdoor wedding (they were so lucky!) We drove up from Christchurch in Tom’s van as there was a special area at the wedding for everyone to camp (their wedding invites were like festival tickets, with a special camping pass!) It was pretty exciting to be able to park up, pull the bed out in the back of the van and know we didn’t have to worry about making our way back to a hotel later that night! 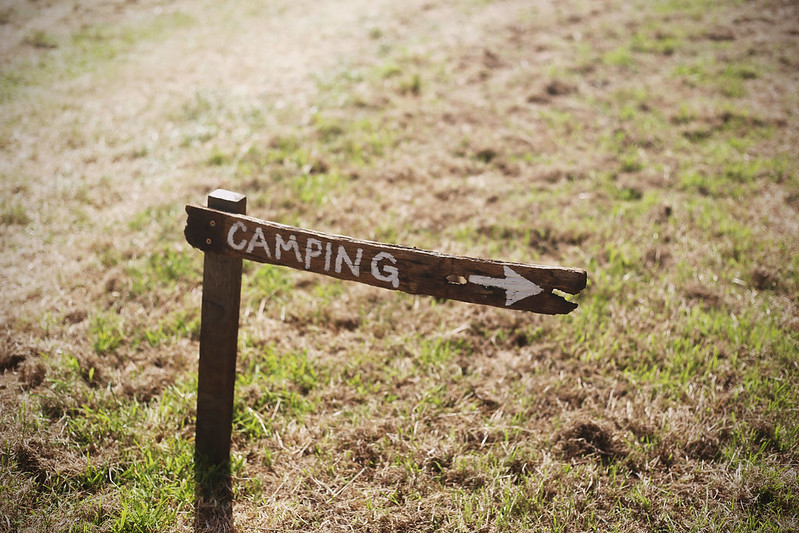 One of the first people we bumped into when we arrived, was Becki and Joe’s dog Bu (a whippet). She had a special bow tie made out of pretty fabric.  It was one of the first signs that Becki’s sewing machine must have been working overdrive in the weeks before the wedding! 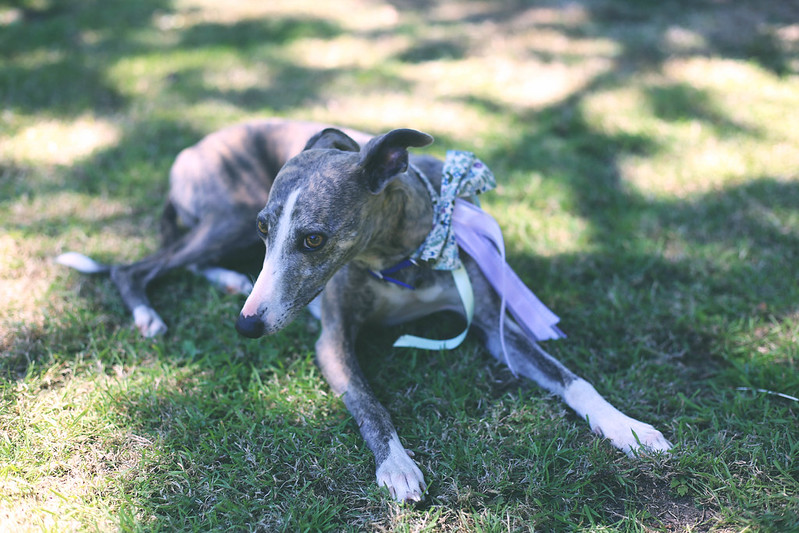 We then walked into the marquee area, where they’d made a makeshift bar out of pallets.  There was lots of amazing prosecco and beers and ales on offer – all of the beers (including a signature elderflower beer) were from their local pub, the Red Lion in Cricklade.  The marquee itself was beautifully decorated, with bunting strung across the outside and inside (all courtesy of Becki’s sewing machine again), wildflowers from the garden in jars and pots, vintage milk bottles, ribbon strung on backs of chairs, bottles wrapped in lace, and all manner of other lovely little details.  It really was breathtaking. 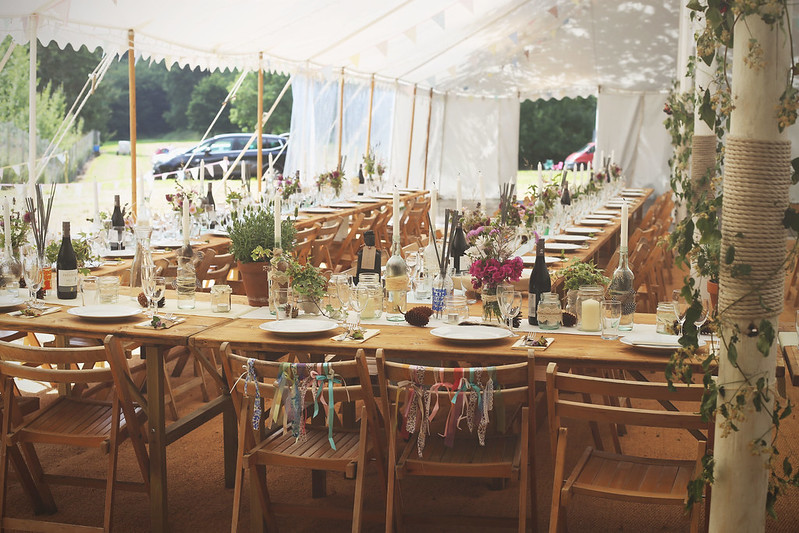 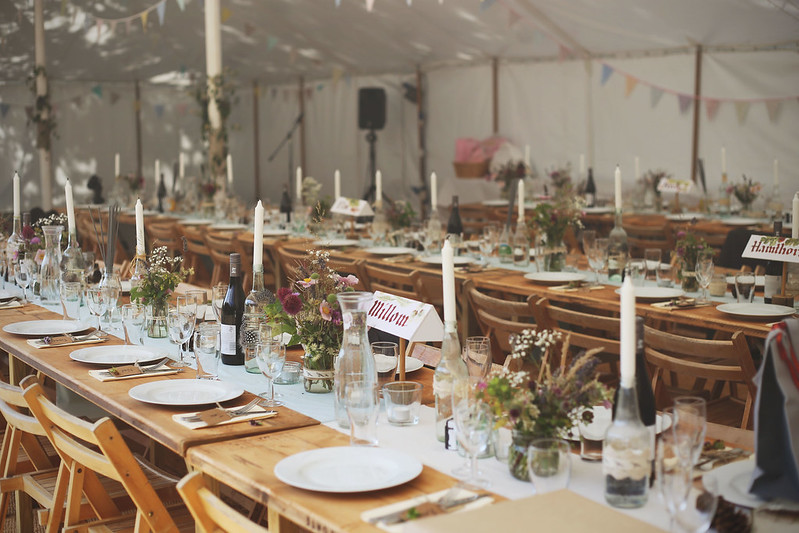 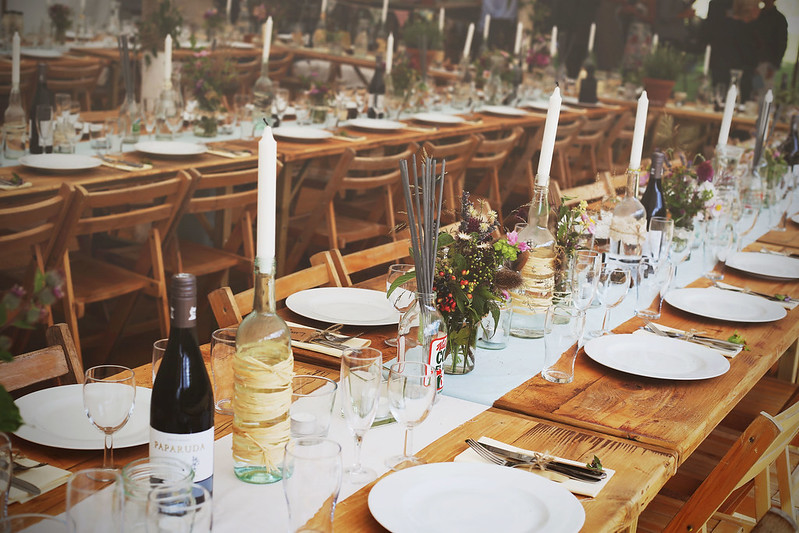 After a couple of prosecco’s in the sunshine, the bride and groom finally arrived – in a tractor of course! 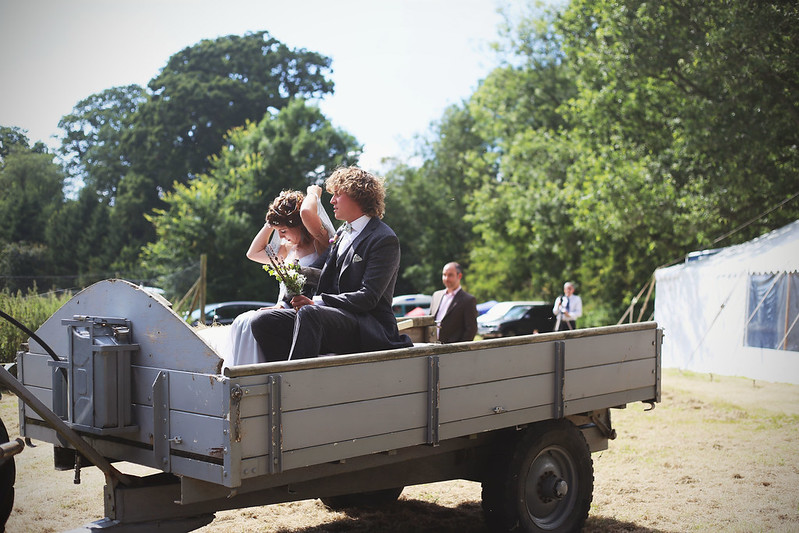 They had already been married in a Registry Office a few days before, so they were able to have a ceremony on the jetty on the lake, officiated by a friend.  The ceremony itself was really lovely, with personalised vows (and dogs popping along here and there to join in!) 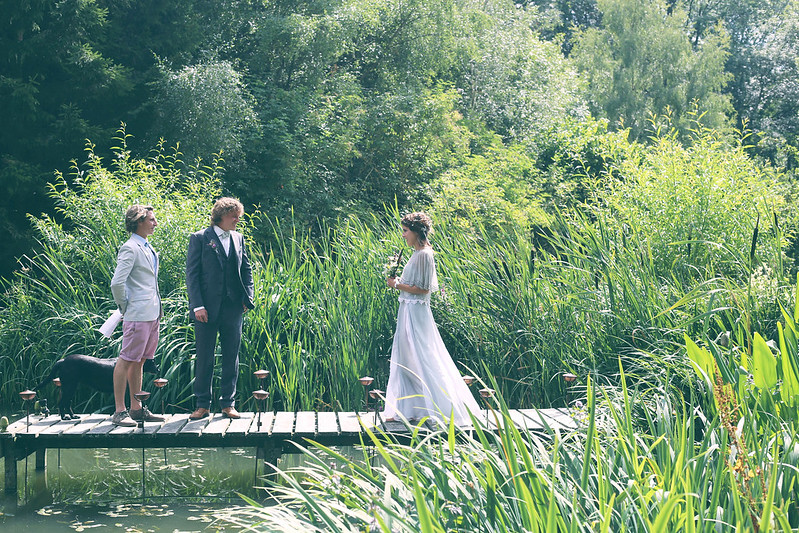 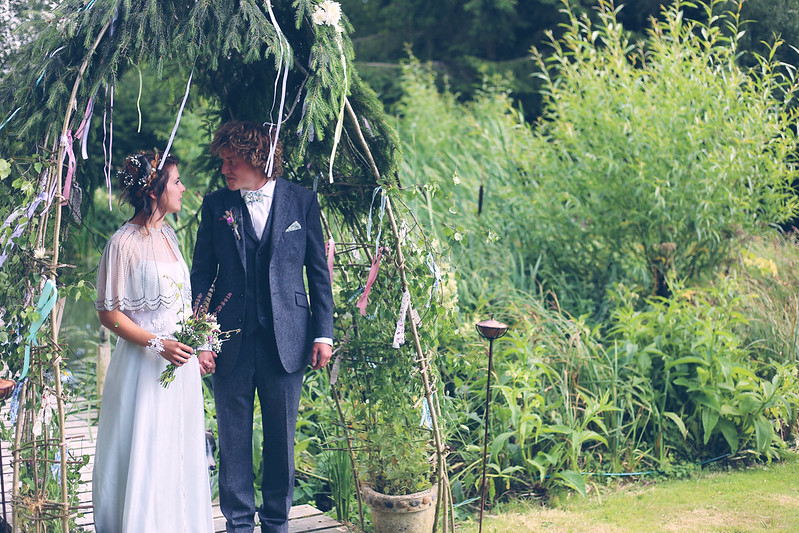 Becki’s dress was custom-made, and then she embroidered extra sections on herself (apparently she was sewing sections of the dress even the night before the wedding!) 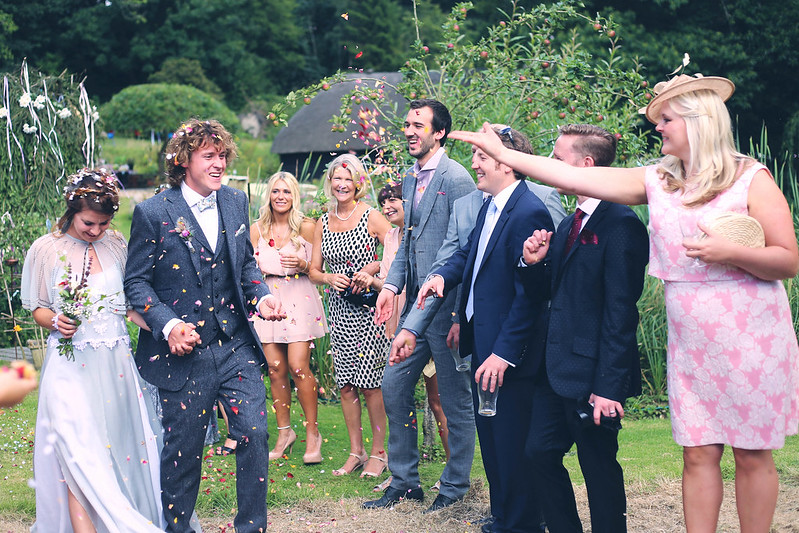 After the ceremony, the bride and groom made their grand exit, in the tractor again! 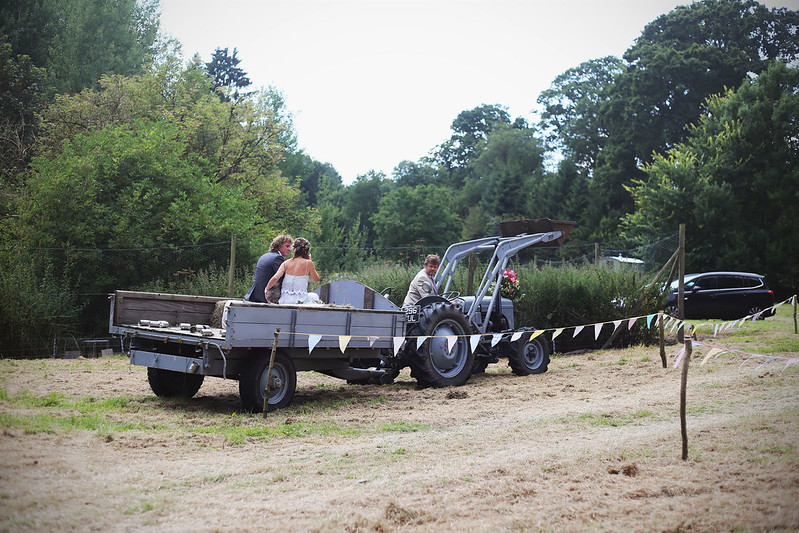 Meanwhile, we were served pimms and lemonade, in jars with stripy straws (and little labels that said drink me – I was happy to oblige).  A band played, and Tom managed to consume about three jars worth of olives all by himself. 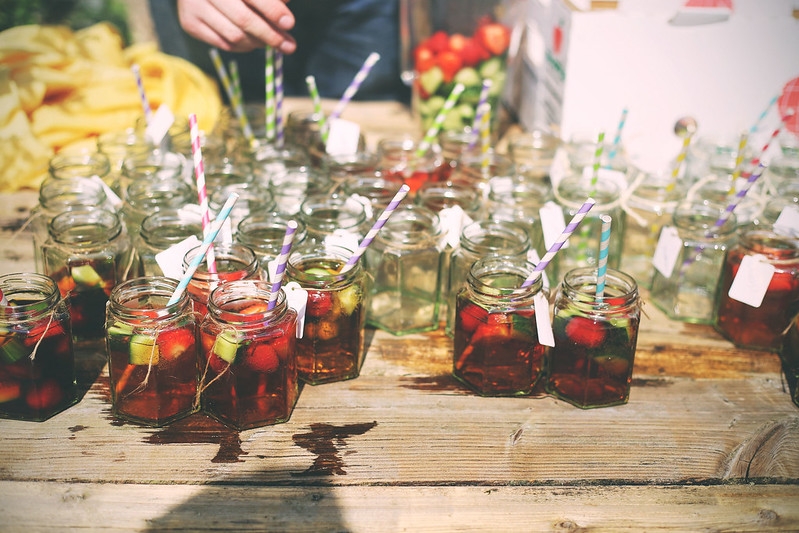 The trees in the area where we had drinks were also strung with lanterns, and hung with bottles with wildflowers in.  So pretty! 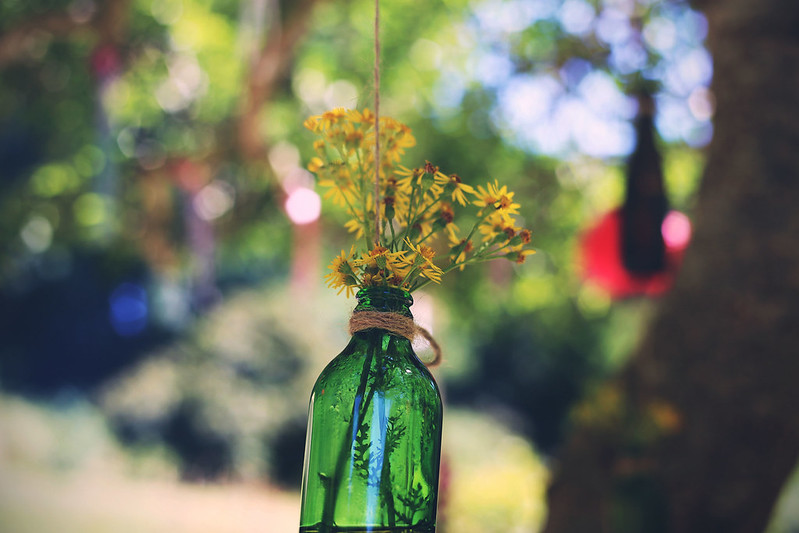 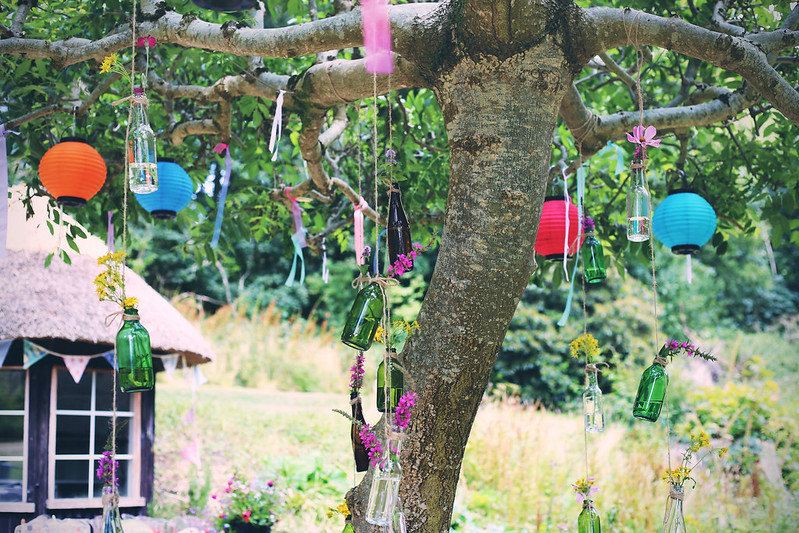 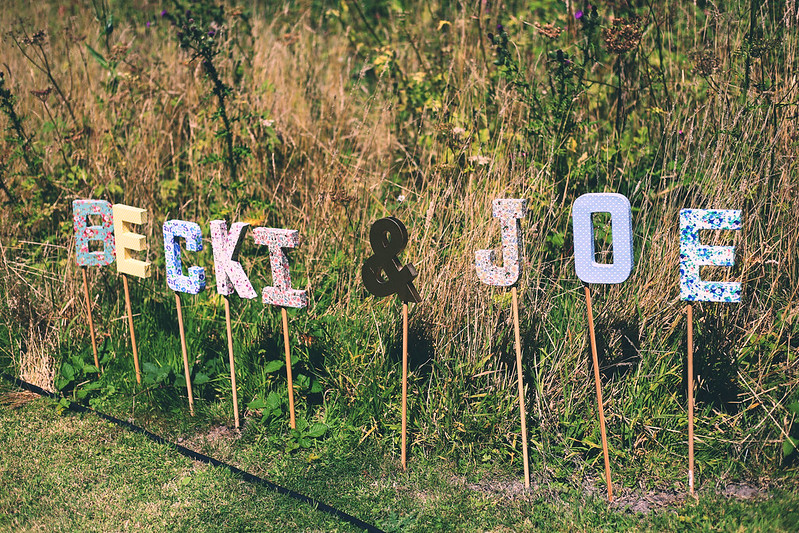 After the drinks reception, Becki and Joe re-emerged from their tractor trip and we were seated for the speeches and the wedding breakfast.  The speeches were similarly lovely (it’s always the Father of the Bride speech that gets me!) The wedding breakfast consisted of a whole plethora of amazing foods, from delicious breads and cheeses, to homemade pies from the local butchers, and even lobster!  We piled our plates high, of course, greedy guts that we are.

After the wedding breakfast, there was more drinks and merriment until the band played a little later – and long into the night! There was also an amazing hog-roast in the evening – I mean, does it get any better? And there was First Aid Kit playing on loop in the toilets.

I didn’t take any proper photos of my outfit, only a couple of phone snaps.  Because I knew it was a festival-y wedding I went for this little cheesecloth number from Pull And Bear.  It was reduced in the sale and then sadly sold out.  I also did a sort of milkmaid plat in my hair and then had to cover it up with a flower crown as it was a bit messy! 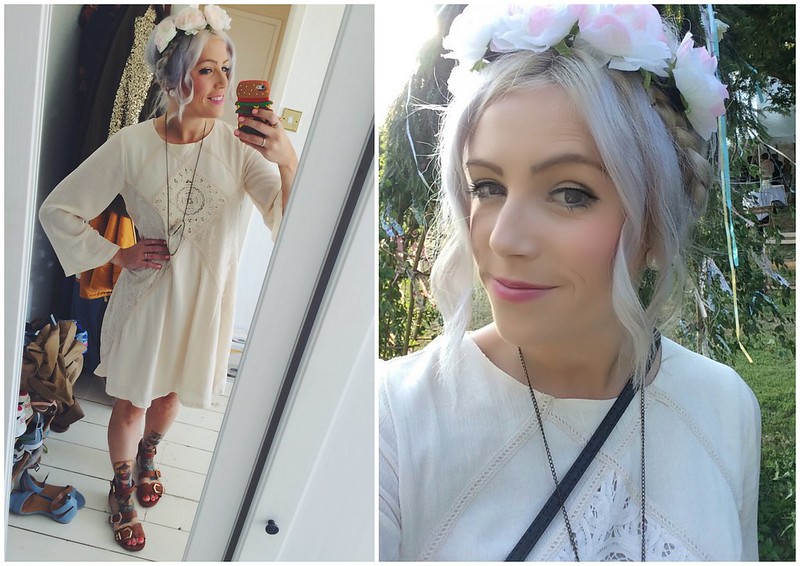 The day after the wedding we awoke in the little camping area in need of refreshment and, of course, the ultimate hangover cure – a bacon sandwich.  Becki and Joe had stayed in a lovely little shepherd’s hut just next to the camping area and when they got up they announced that they’d bought sausages and bacon to cook on their fire pit! (The best news I’ve ever heard).

The sausages were called Bloody Lovely Sausages, from their local butcher (Andrews Quality Meats in Swindon – they also did the pies and the hogroast), and they definitely lived up to their name. They were definitely the best sausages I’ve ever tasted.  I might have had a couple of sausage and bacon rolls – well, it would have been rude not to.  There was prosecco left over, so we accompanied the bacon and sausage rolls with Bucks Fizz.  The perfect start to a Sunday! 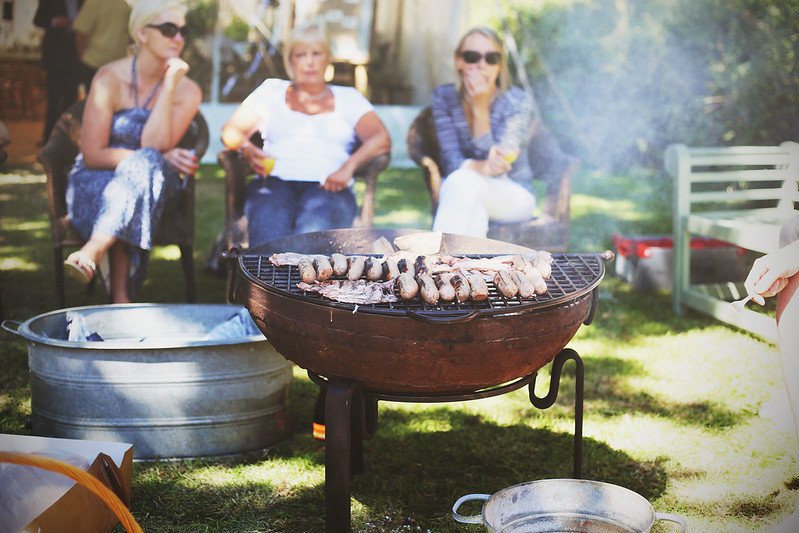 The morning after the wedding was almost as perfect as the wedding itself.  We all sat around in the sunshine, eating and drinking and whiling away the morning.  Tom even did a spot of fishing in the lake! (And nearly fell in). 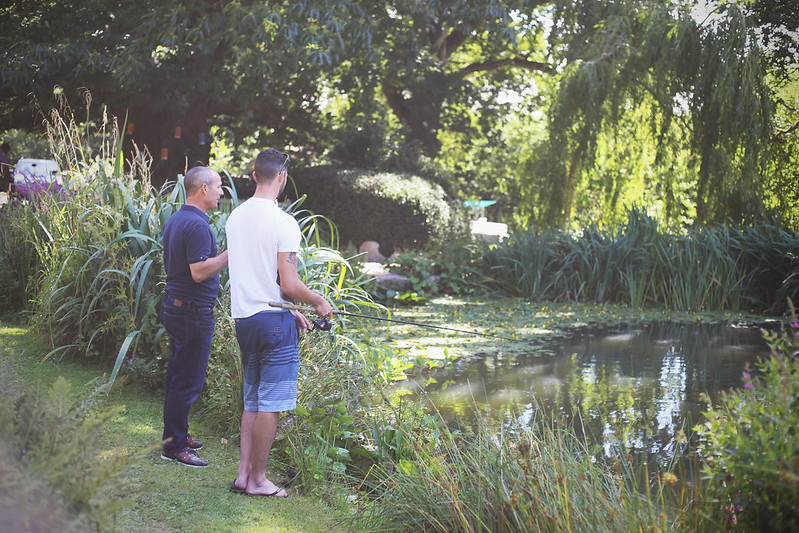 After a few hours we sadly had to leave to head back to Dorset.  We were definitely sorry to have to go, after such a perfect weekend.  I think you can tell from this post just how much effort Becki put in to making all of the bunting, collecting wildflowers, and all of the details on the table and in the marquee, and it really did pay off.  It’s funny how much more you enjoy weddings once you’re married yourself, as you realise how much blood, sweat and tears goes into making the day perfect who everyone who comes along!

Congratulations to Becki and Joe, and thankyou for inviting us <3