Many of you will know by now that the sea, and nautical
things generally, are quite close to my heart.
My Dad was in the Royal Navy when I was a child, and I used to love
imagining him in the far-flung areas of the world he would be sent to (mostly
the Falklands), sailing around the high seas.
When I was growing up, we never lived more than a ten minute walk from
the sea, and most of my youth was spent messing about on the seafront, riding
my bike along the promenade to see friends, or getting the ferry across from
Gosport to Portsmouth to go clubbing when I was a bit older.  I’ve always had a bit of a thing about
traditional sailor tattoos, and some of you might know that I have four
different swallow tattoos, as well as ropes, a lighthouse, an anchor and an old
ship.  We now live a little further along
the coast than what I did as a teenager, but so many of our weekends involve
walking or running with Bodhi along Southbourne beach (and you probably might
know that even more of Tom’s time is spent surfing, kitesurfing, windsurfing,
or doing anything that involves a board and the sea!) 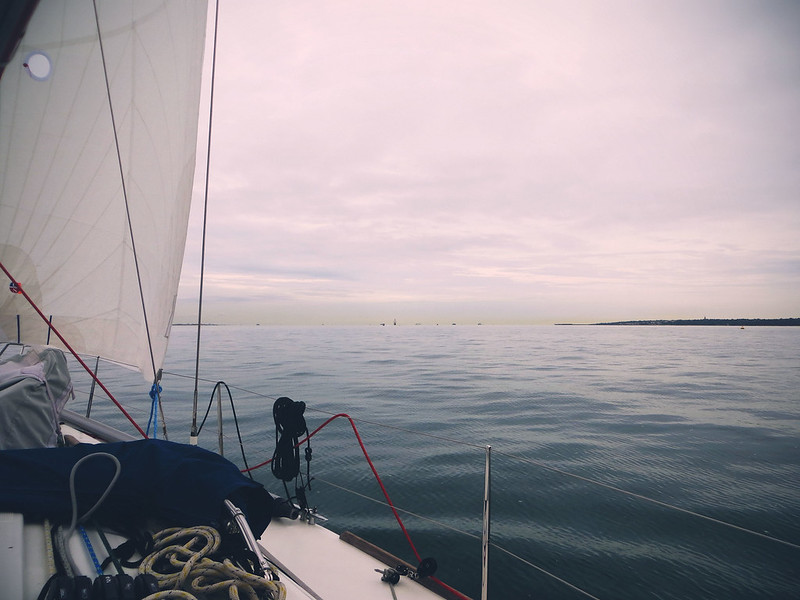 One thing you might not know is that Tom and I actually
met whilst on a Sunsail sailing training week with the organisation we both
work for.  We’d never met before (and
worked about two hours’ apart from each other at different sites), but Tom was
the First Mate on the yacht I was assigned to for the training.  Funnily enough, I signed up with a friend who
was always intended to be the First Mate on the yacht, but she had to drop out
at the last minute and Tom stepped in to help.
Not sure if fate was doing a bit of subtle nudging on that day! I
decided that Tom was the one for me when he spent about an hour trying to teach
me how to tie a bowline knot.  Anyone
that has the patience to coach a very stubborn me through tying and then
re-tying the same knot over and over again has got to be a keeper! Tom now has
the coordinates of Port Solent, where we sailed from that day, tattooed on his
arm. 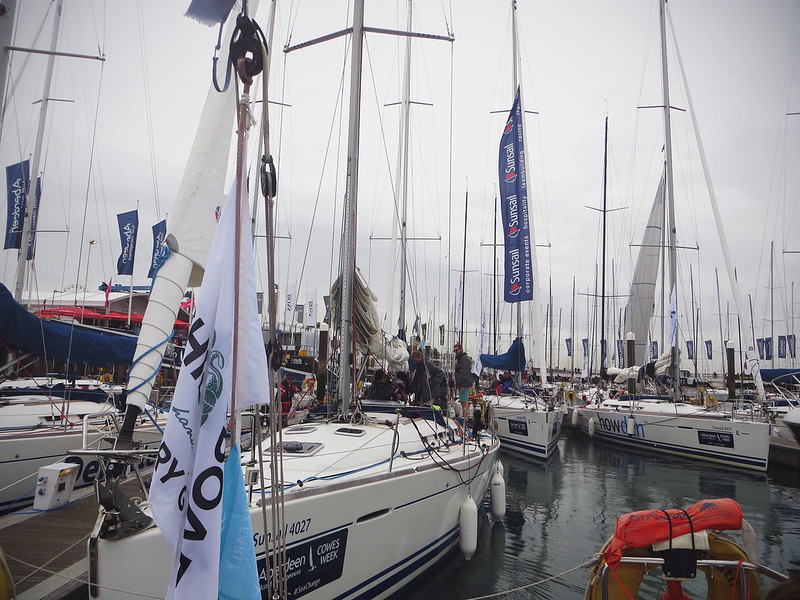 Despite that amazing sailing experience, and Tom’s
parents and one of his best friends owning a boat, I’ve only been sailing a
handful of times since that week in 2010.
So when Sunsail got in contact a few weeks ago and asked if I wanted to
spend the day going racing on one of their yachts on Cowes Week Ladies Day, and
then attending a Liz Earle Reception in the evening, I jumped at the chance at
a little nostalgia and the call of the ocean!

So, the Tuesday before last I found myself heading over
to Cowes with two other bloggers, three other sailing journalists (all female
of course – it was Ladies Day!), and Lucy and Chloe, the lovely PR people from Sunsail, for a
day of frolicking and fun on the high seas.
Cowes Week is one of the longest running regular sailing regattas in the
world and has 40 races a day, up to 1,000 boats and up to 8,000 competitors –
so it really is a huge event for anyone interested in sailing or living on or
around the Isle of Wight.  Despite this,
I’d never been before, so I was so excited to go along and get a taste of the
action! 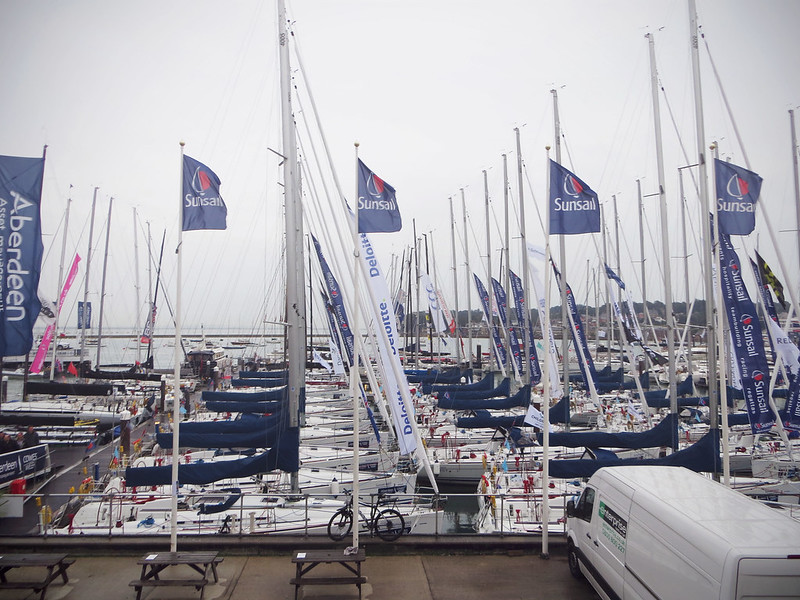 Immediately after arriving at Cowes we were introduced to
the rest of our crew (Nick and Pippa, the two other Sunsail people who would be skippering our yacht)
and given our lifejackets and wet weather gear.
Unfortunately my visions of lazing on the foredeck in a bikini were
hampered by the good old British summer, and instead of blazing sunshine we had
clouds and drizzle.  Another cruel trick
that the weather played on us was the absence of wind.  It doesn’t take a genius to work out that
going racing in a sailing yacht when there’s not even a single knot of wind is
somewhat problematic.  The intention was
to race the other Sunsail yachts in the fleet for the chance to win prizes at a
later prize-giving ceremony, but the flat calm seas and lack of a breeze rather
dashed these plans. 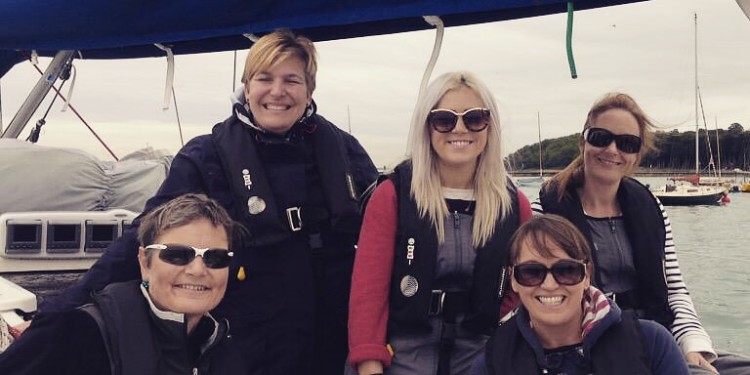 >> from l – r, Camilla from the Cruising Association, Monika from Mum on the Brink, Karen from Mini Travellers, Emma from Sailing Today.

Instead, we had a brunch of pastries and fruit and were
given a tour of the yacht before setting out into the Solent for a very
civilised pootle around.  We spied some
rather expensive yachts and trimarans and had a good little nose at these,
waving at all of the people on various luxury vessels (and trying to convince
them to send us over some champagne).  We
had cups of tea and tried to avoid the incessant mizzly rain, constantly
keeping our fingers crossed for a bit of wind and a break in the clouds. 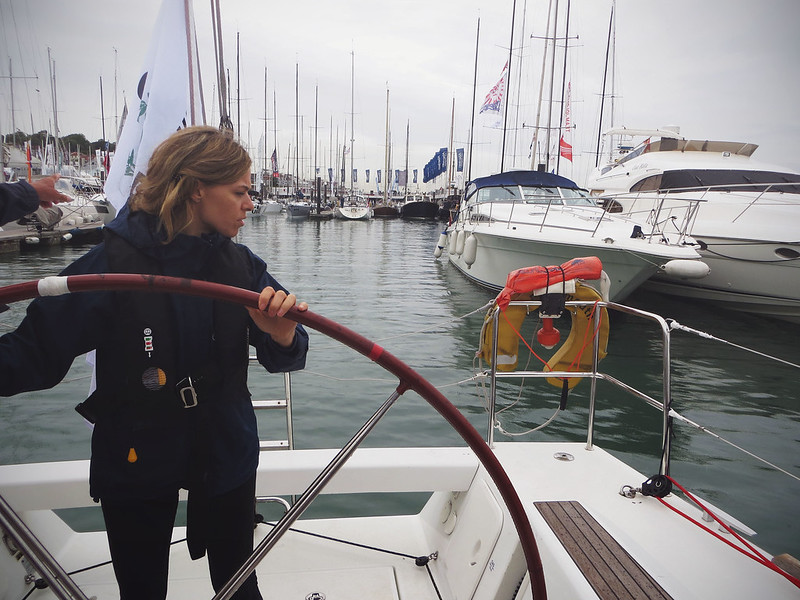 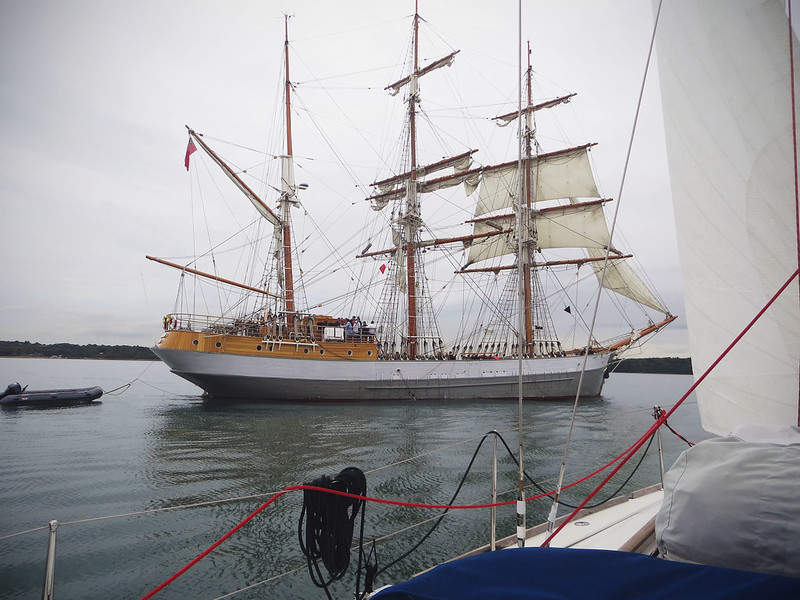 After lunch, and a lot of pootling, we headed back into
Cowes for a look at the Cowes Parade Village – a series of stands, exhibitions,
bars and food stalls all put on during Cowes Week .  Liz Earle was one of the official sponsors of
the event – as well as of Ladies Day – (it has its Head Office on the island)
and there was a fab stall offering arm and hand massages, skincare consultations,
and a little shop where you could buy their various products.  Cowes itself was also a real hubbub of
activity, with lots of popup shops and food places serving the hundreds of
people who had descended for Cowes Week. 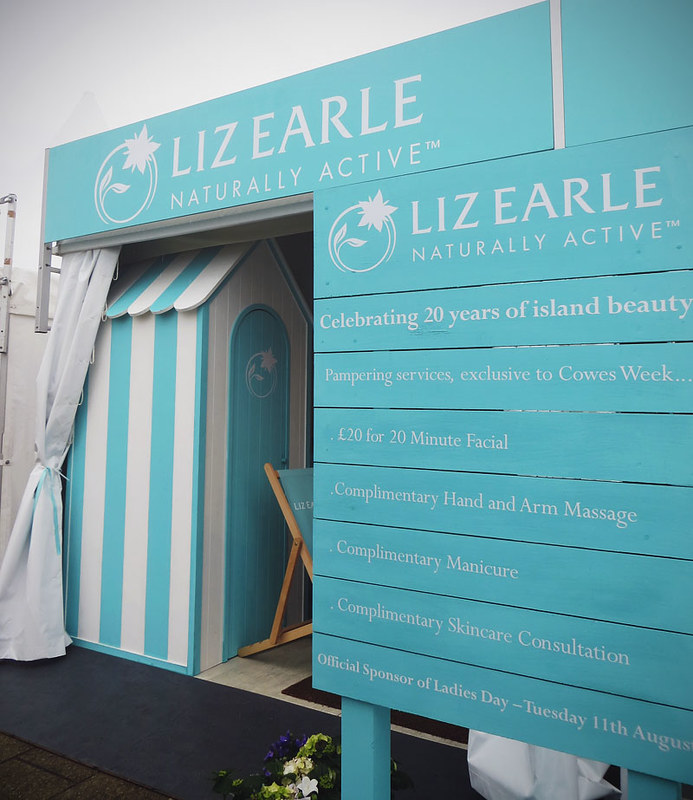 After looking
along the Parade we went to the Sunsail Balcony for a light dinner (cold meats,
garlic bread, olives and cheese – my favourite type of dinner), a glass of wine
and an alternative race with which to inform the prize giving ceremony.  Instead of racing Sunsail yachts, we would be
‘gutter racing’ with the other Sunsail crews – racing little plastic boats down
a gutter full of water, with the wind provided by our puffing capability!
Unfortunately, it seemed our puff was a little sub-par, as we came second to
last, and did not manage to secure a trophy, or a coveted bottle of Chilgrove
Gin for our efforts. 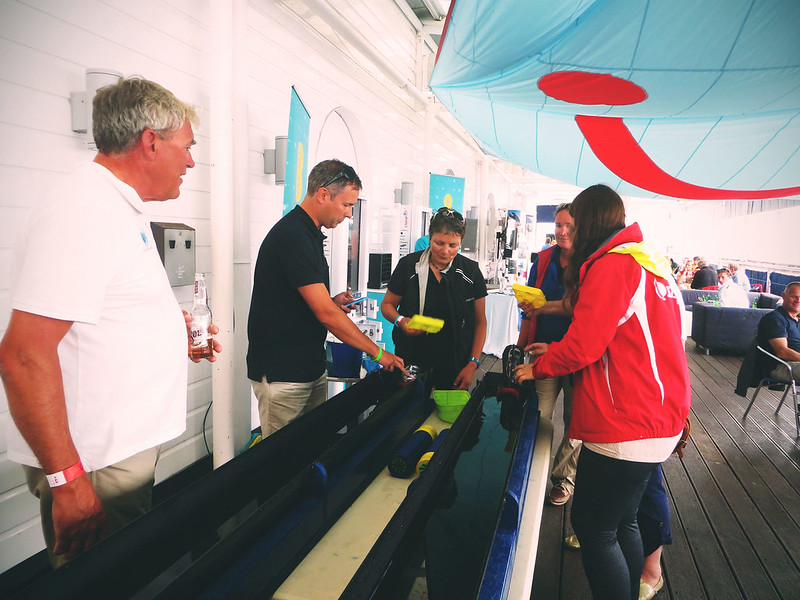 After the puffing and prize giving was over we changed
into our evening attire and took a car to Northwood House for the evening
reception.  The Ladies Day reception
included the giving of the prestigious Ladies Day trophy, championing women in
sailing and recognising the contribution of a woman who has played an integral
part in sailing over the previous year.
This year the trophy was given to Libby Greenhalgh, Chief Navigator for
Team SCA in the recent Volvo Round the World Ocean Race. 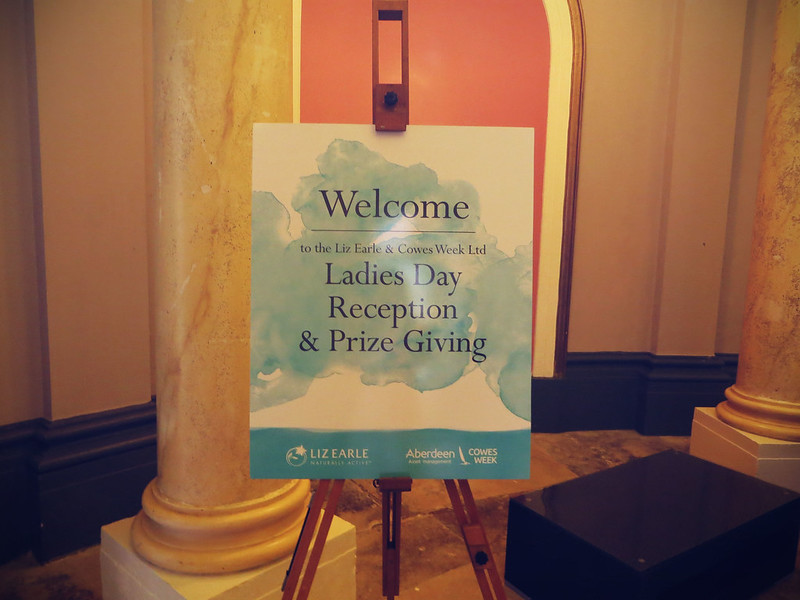 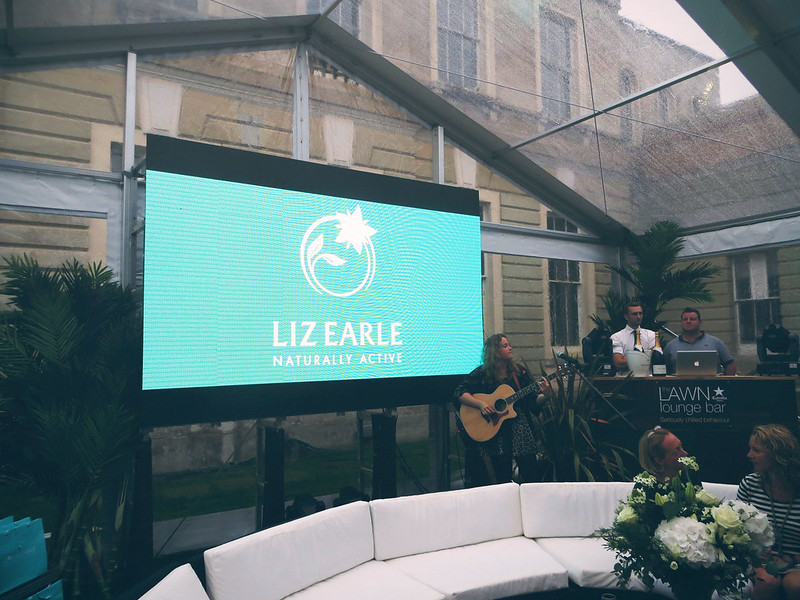 We were lucky enough to be given lots of lovely glasses
of champagne and canapés whilst we chatted to others at the Reception and
helped celebrate the prize giving.  We
were also given some extremely generous goodie bags packed full of Liz Earle
products. 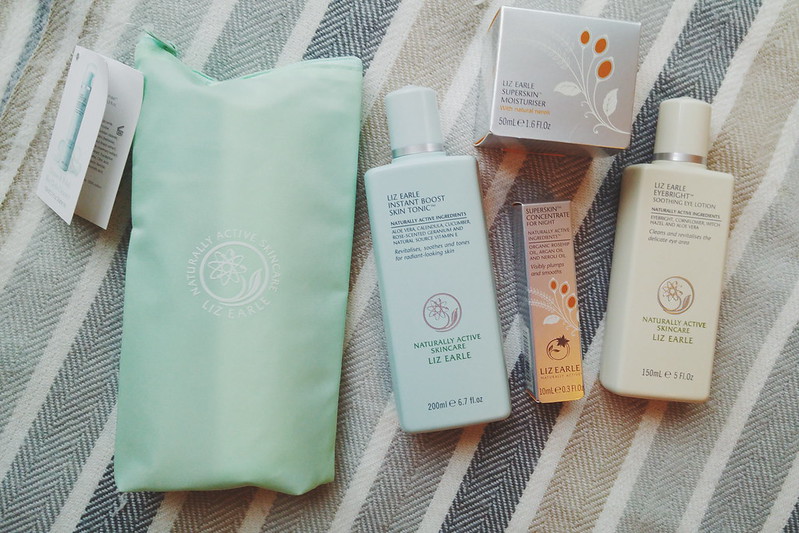 After the reception was over we hopped back on the Redjet ferry for our journey back to Southampton.  I was personally pretty exhausted – it turns out that motoring around the Solent, eating lots of yummy food and then drinking lots of champagne is tiring work indeed! It was a totally amazing day and I was thrilled to be invited – I owe a huge thank you to Sunsail for inviting me.  I’ve now been checking out their yachting holidays as, whilst I think it was pretty awesome sailing around the Solent, I think it would be even more awesome to sail around the Caribbean….

Are you a seasoned sailor? Have you ever been to Cowes Week?