If I had to desribe my perfect blogging event, it wouldn’t involve cocktails, party dresses and a swanky club, but it would probably involve cheese, cider and stroking animals.  I realise that’s pretty niche, but hey, I’m a country bumpkin at heart and being surrounded by dairy products and farmyard animals is my happy place. (Honestly, the only reason I’d consider having children at the moment is to give me an excuse to go to one of those farms where you can feed the animals and go on tractor rides, without looking like a complete weirdo).

And so it was, that the lovely Tamsin asked me if I wanted to go to the Royal Bath and West Show with her and Barber’s Cheese, and I was sold before she even got onto the bit about the tour of the British Cheese Awards…

Naturally, because it was an agricultural show, I popped on my Barbour jacket, Barbour boots and my most country bumpkin hat, and headed off with Tamsin for a day in the sunsine. 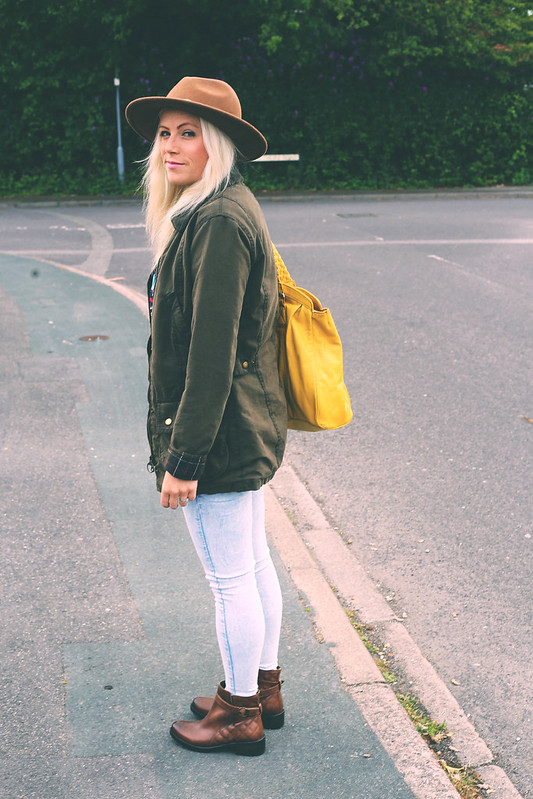 The first part of our day at the Bath and West Show involved us meeting some of the lovely chaps that make up the Barber family and run the cheesemaking business from their farm in Somerset. They were all so nice, and helped alleviate some of our nerves at entering their cheese toastie making competition!  Armed with their extremely yummy Barber’s 1833 Vintage Reserve Cheddar, we were asked to whip up a culinary creation that would win over their judges and be crowned the 2015 Ultimate Cheese Toastie.  I went for a three cheese (cheddar, goat’s cheese and Applewood smoked cheese) and caramelised onion chutney toastie.  Tamsin made a parma ham, spring onion and cheddar toastie. 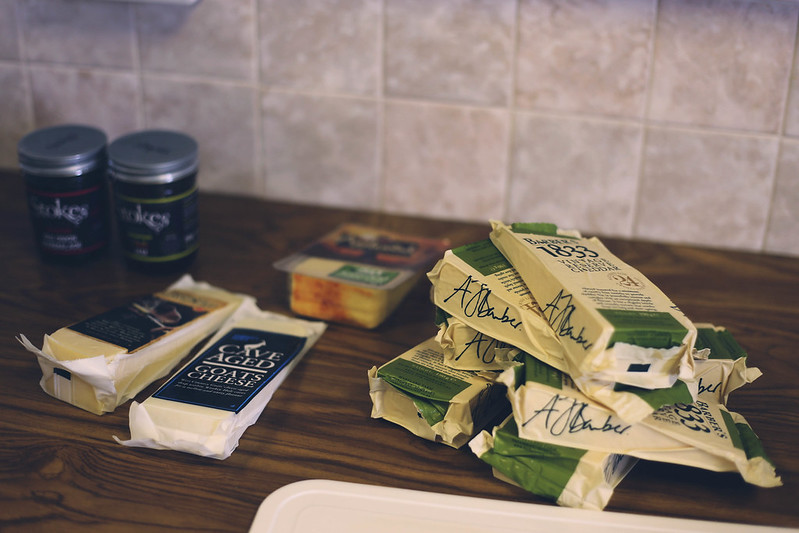 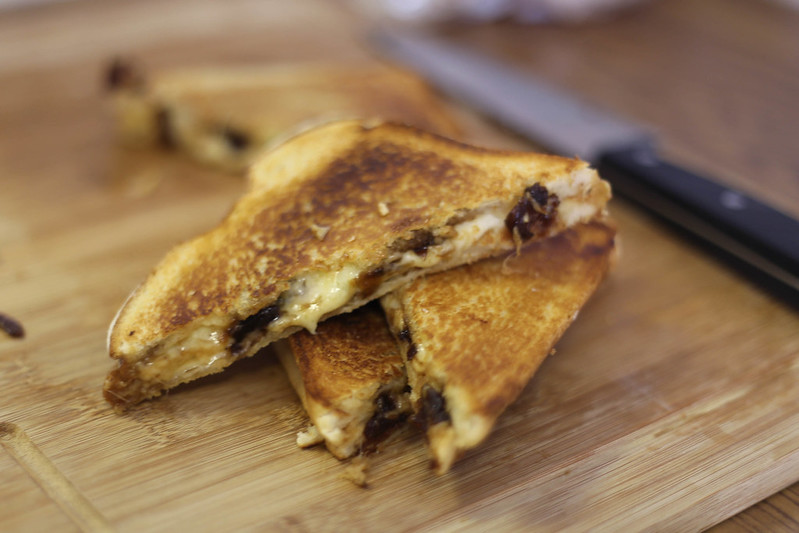 We got to taste our own and I thought both of ours were great – so we were excited to hear the announcement of the winners a little later.  I didn’t realise however, that there were some rather accomplished food bloggers involved, and the winning toastie turned out to be May’s nduja Italian sausage, pear, apple, honey and cheese toastie.  A rather delectable string of ingredients that definitely beat my humble three cheeses! They only read out the top three so I was either 4th or last – oops! Tamsin came an impressive second, I was jealous….

After the announcement I soothed my bruised ego with some cider and cheese tasting.  Louisa Sheppy, part of the family who own Sheppy’s Cider, came to talk us through three of their popular ciders, and a new fruity cider that has been added to their repertoire – Blackberry and Elderflower. After we had tried each of the ciders we then tried more of the yummy Barber’s cheese to see which was the best accompaniment for a platter of the finest cheddar! 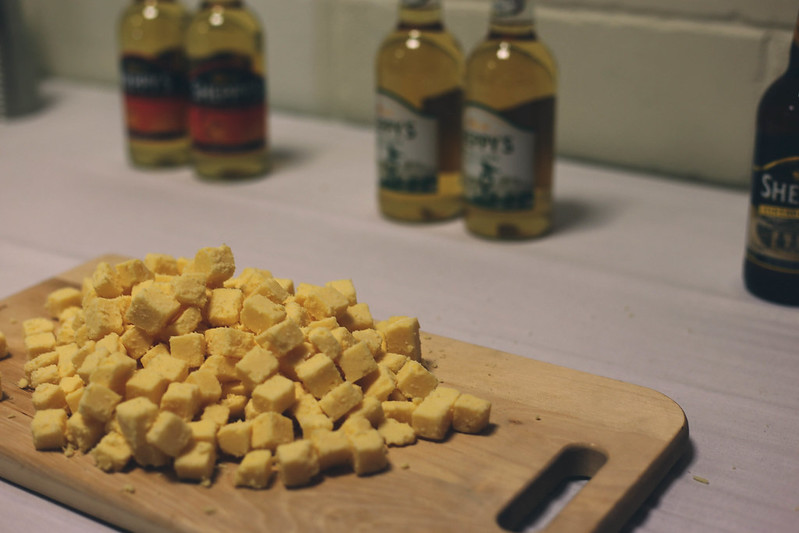 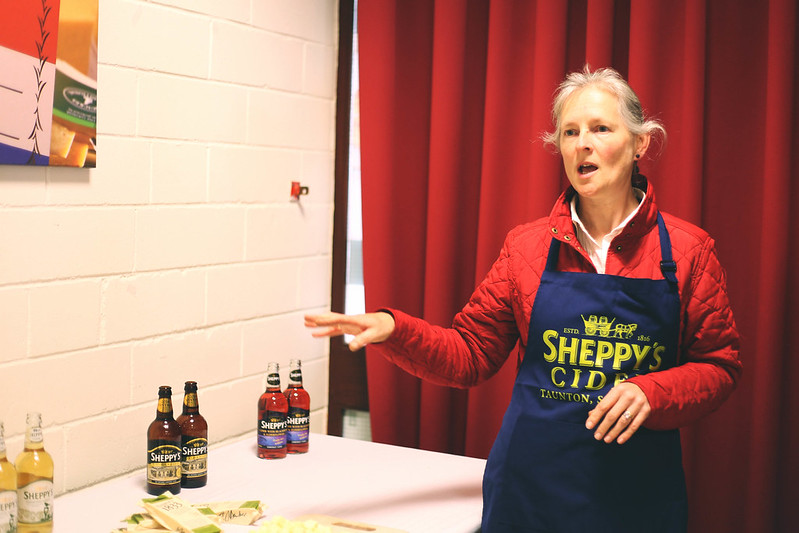 Louisa’s insight into their ciders was absolutely fascinating.  We learned all about how people’s palates have changed so much since the first days of traditional cider making, when the farmer would have a bottle of what we would probably describe as flat, cloudy cider on his kitchen table, and most people nowadays who have been brought up on the popular supermarket brands might not think was sweet enough.  Personally I love a really good vintage, scrumpy cider, and my favourite of the Sheppy’s ciders that we tried was their vintage reserve (which incidentally won a Great Taste Award in 2013 and 2014 – so I must have good taste!)  It was also a great match for the Barber’s cheese, so that’s a pairing that will definitely be happening in my kitchen ASAP!

After the tasting we then had a tour of the British Cheese Awards.  The awards were held on the 26 May, the day before the show opened, but the Cheese Hall (are there two better words in the English language?) housed all of the winning cheeses.  We got to taste the supreme champion – the Barkham Blue from Two Hoots Cheese.  It was delicious, as you’d imagine.  It was hard not to be mesmerised by being in a room full of cheese though…. Oh to be a cheese taster (dream job or what?) 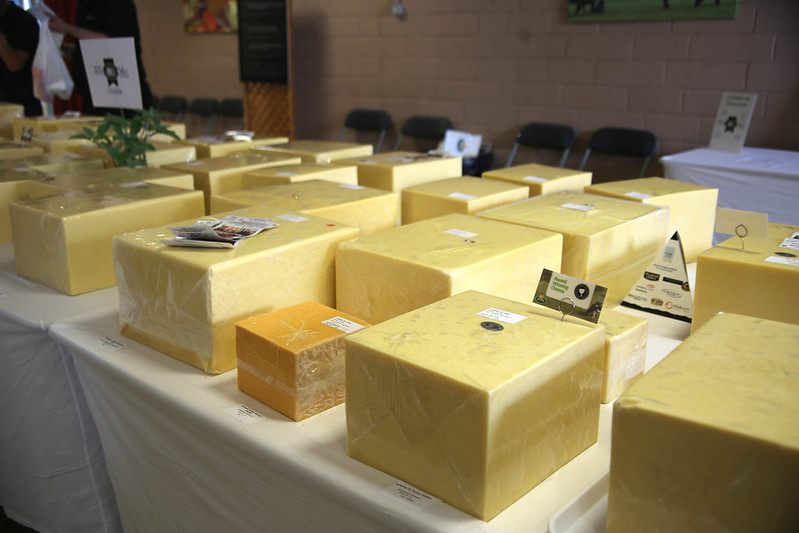 After our tour of the Cheese Hall, and lots more tasting, we headed off to explore the rest of the show.  We went to the Main Ring to watch one of the horse shows… 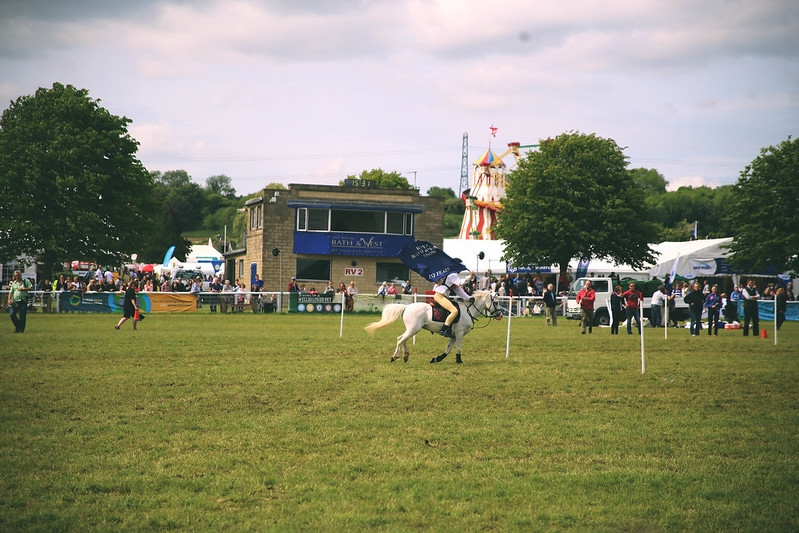 … and then into the livestock area to see the various cattle, pigs, goats and sheep competing to be ‘best in show’.  We loved these fluffy Galloway cattle, they look like they’d had a shampoo and blow dry.  They look so stroke-able! 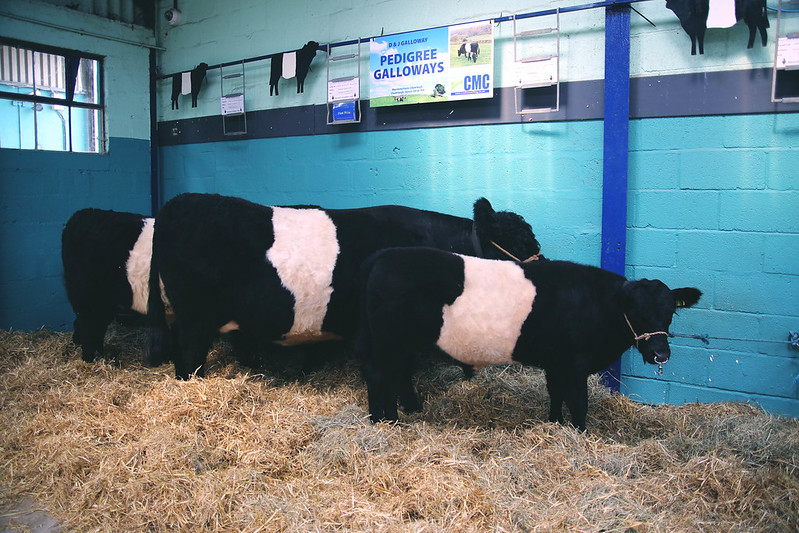 I’m glad I managed to include the person in this photo for scale, othereise you’d never have believed how big they were. These cows weighed over ton! I’ve never seen such a gigantic cow…. 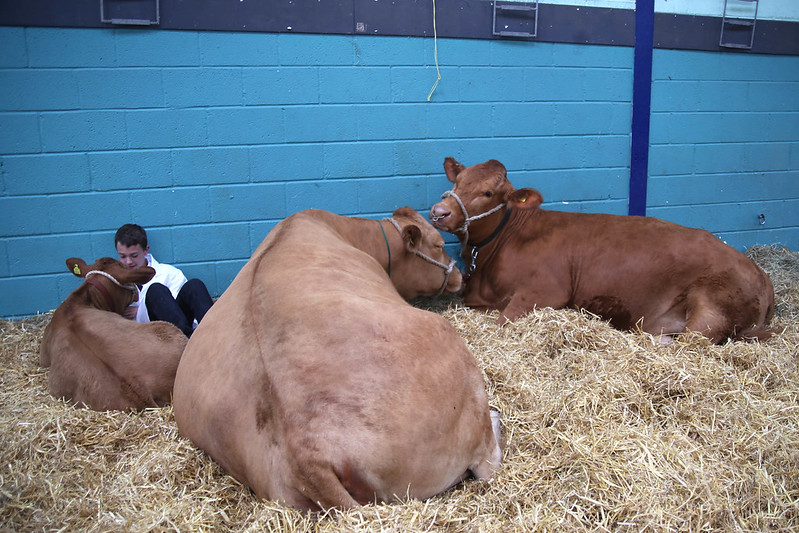 These sheep were all snuggled together in the sheep area, and this black sheep had his eye on me…. 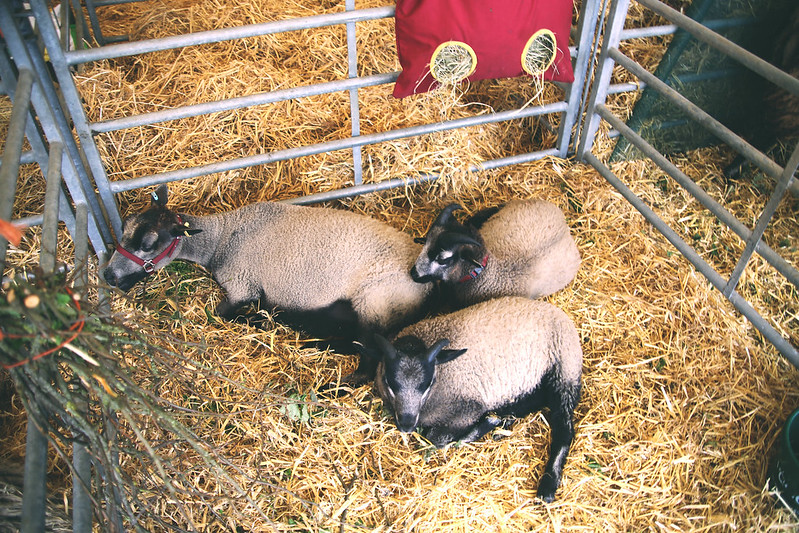 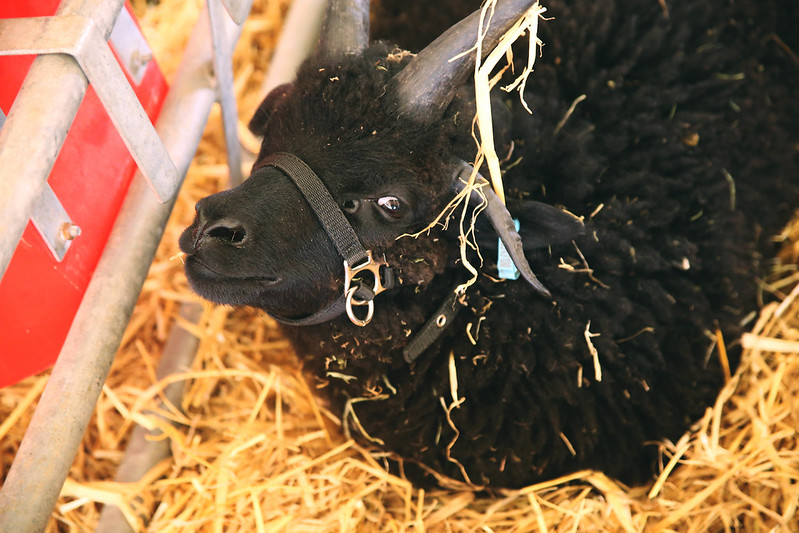 The Kune kune pigs were our favourite, they are ridiculously cute.  I really want one but Tom isn’t convinced! I didn’t get a very good photo of them but I’m just going to link to this advert in case you don’t believe me…

After looking at all of the livestock we went to explore the Food Court, which was huge and included millions of different stalls and even a Small Producer’s Marker, which was a nice addition.  We had a good chat with this chap from Rosie’s Cider, made in Llandegla in Wales.  I was given a sticker because my name was Rosie! Rosie’s Cider was named after his dog Rosie, who sadly passed away. She was also the CEO of Rosie’s Cider – she definitely left it in safe hands as the cider was amazing – I came away with a bottle of their Wicked Wasp, I’ll have to stock up next time I’m in Wales! 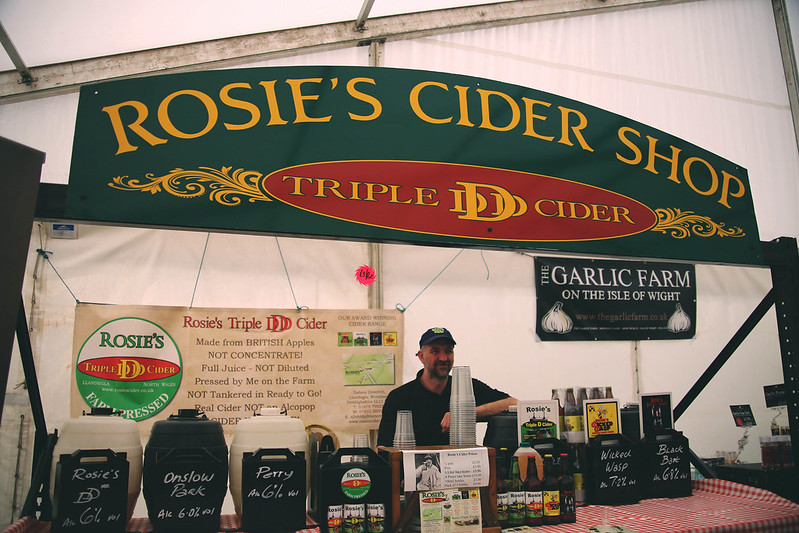 We also stopped off at the Happy Egg bus, and these two happy eggs had our photos taken… 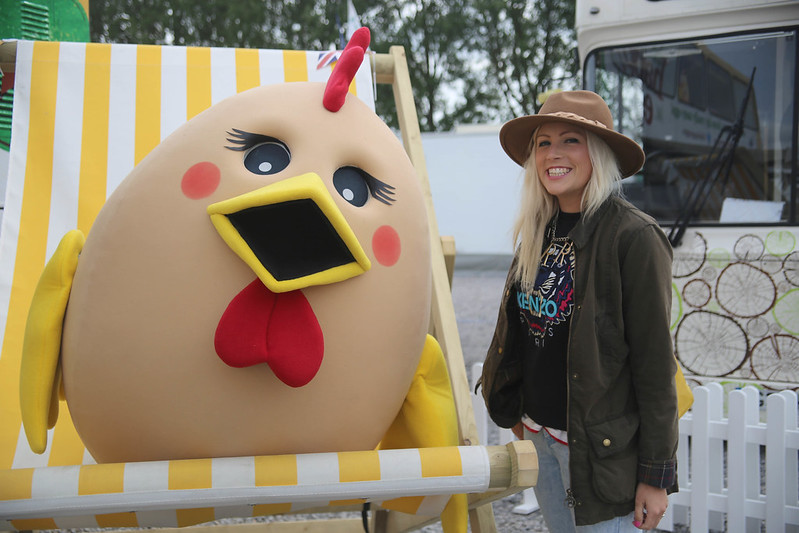 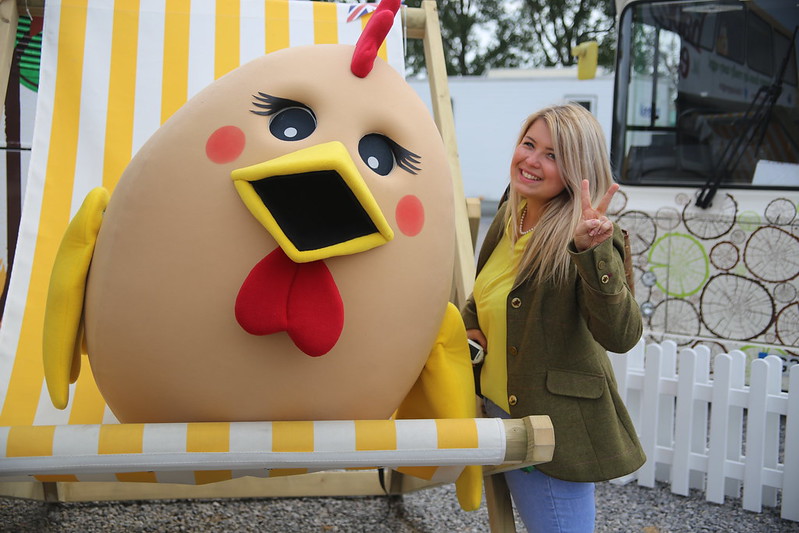 Our final stop was at the Hawk and Owl stand.  There were several absolutely amazing birds there – this one was my favourite, but I’m not sure what it is.  It had its beady eye on me! 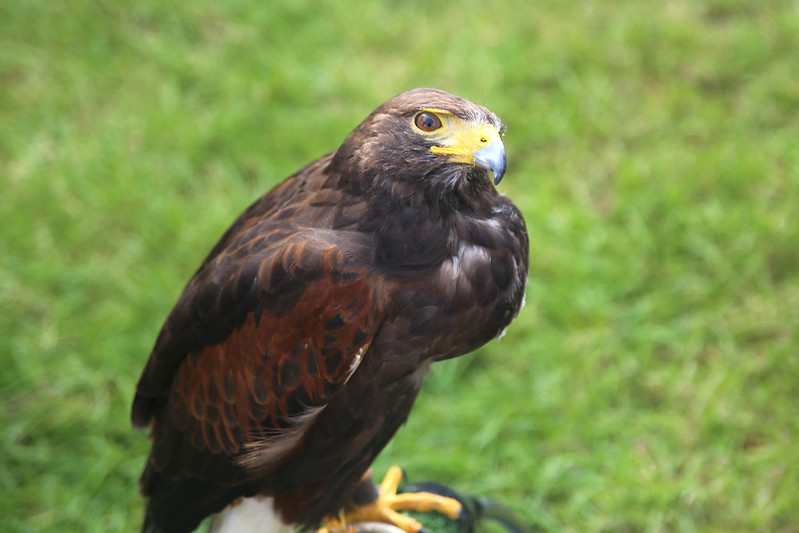 After a lot more mooching around and a large Cornish pasty, we headed back to Dorset, with happy bellies full of cheese and cider.  A big thanks to Barber’s for hosting us, it was just the most perfect day out!

Tamsin also made a fab YouTube video of the day if you want to see the toastie making action and us becoming increasingly convinced that we need a Kune Kune piglet!

Are you a cheese lover? Would the cheese hall be your happy place?