After my post about San Francisco I thought I would now go back to the start and tell you about my Trek America trip in a bit more of a logical order.  I’m so glad that I kept a Notes log on my phone of all of the places we visited as now even only three and a bit weeks since we arrived home I’ve totally forgotten the order in which we visited some places, so I’m looking forward to having these blog posts as a record of all of our stops!

Our tour started on 4 September but Tom and I decided to fly out to LA on the 2nd to give us a chance to get over our jetlag and take in a bit of LA before the tour started.  We were due to meet on the morning of the 4th at a hotel in Downtown LA called the Kawada, but looking at Trip Advisor and doing a bit of research I discovered that that hotel and the area it was inb didn’t have the best reputation, so I booked us a self-catering apartment near the Financial District in Downtown LA (it was called Residences at 616 for anyone interested).

Having taken the photos off my camera it is probably quite fitting that the first photo on there is a stack of pancakes that we had at IHOP on our first full day in LA.  I love IHOP and am a big fan of starting a day with a pile of Cinnabon flavoured pancakes.  I could eat them again right now – there are so disgustingly good.  Drooooool. 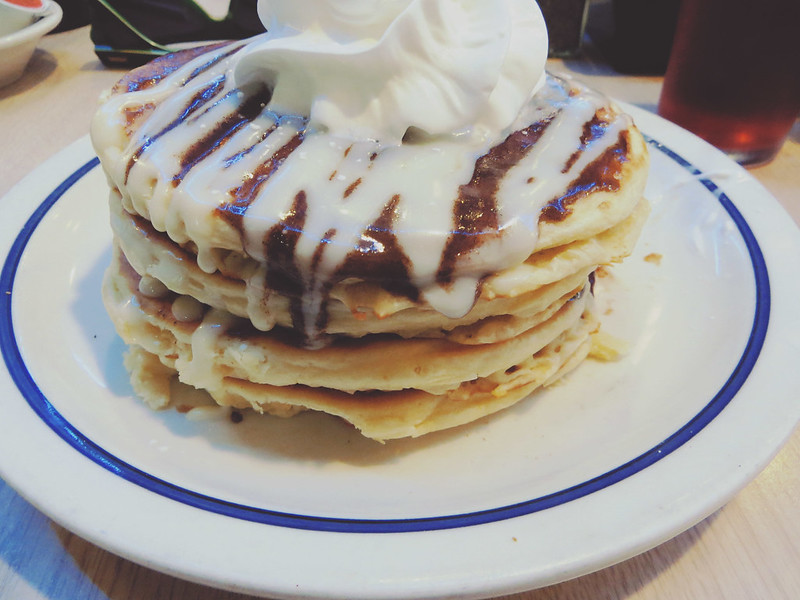 We had walked to IHOP from our apartment and then decided to explore further into the Downtown area of LA.  This day of blindly ambling around Downtown certainly had its highs and lows.  I’d recommend that if you are staying in Downtown and want to explore that you take note of where the safe areas are to visit before you set off.

I had heard of a really cool stationery/gift shop called Poketo which seemed to be only a few streets on from IHOP, so we mapped out a route on Google Maps and started walking. We walked down Skid Row, which is where the largest population of homeless people is in LA, and saw some things that didn’t make us feel very comfortable.  After stumbling onto a row of shops which extended about a mile and only seem to sell drug paraphernalia we decided to head back and give up on our attempt to find the stationery shop!

On the way back we walked through Grand Central Market, which sells all kinds of amazing sounding food via food kiosks and restaurants, and made us feel very hungry.  One of many occasions during our time in America that I wished I could erase the fact that I was full of food already and eat again! 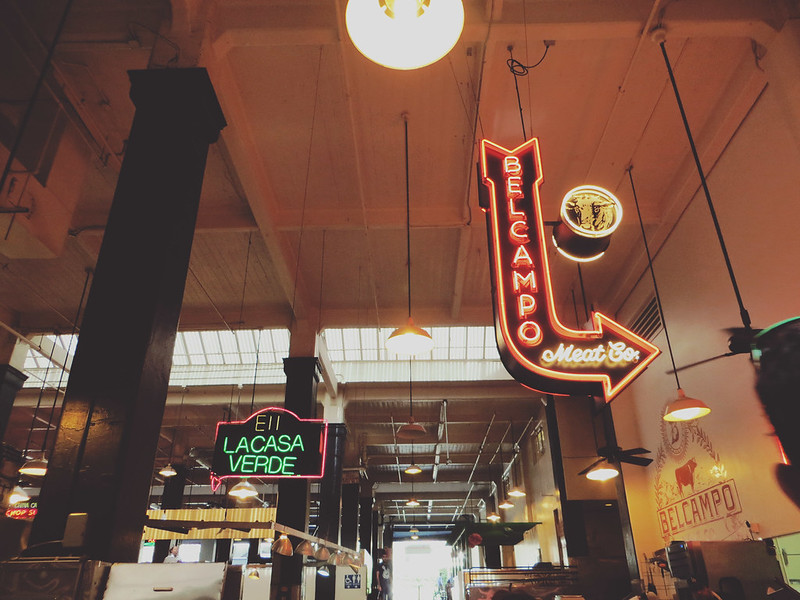 We wandered down Broadway but hit another spot on the corner of 5th Street where we again felt a little unsettled (I saw a really frightening looking guy in a clown costume who also had his face tattooed with clown makeup – and not in a fun ‘children’s birthday party’ kind of way…) so we decided to head back to the Financial District and back towards our apartment. 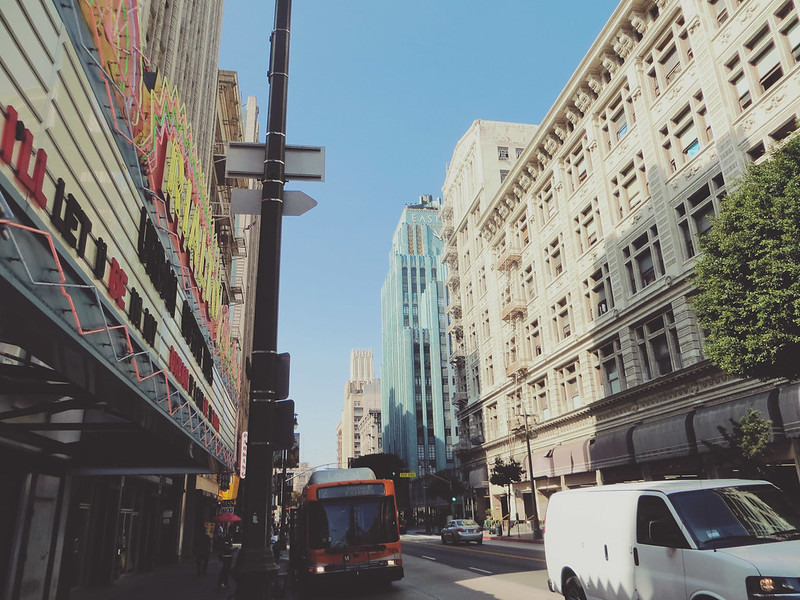 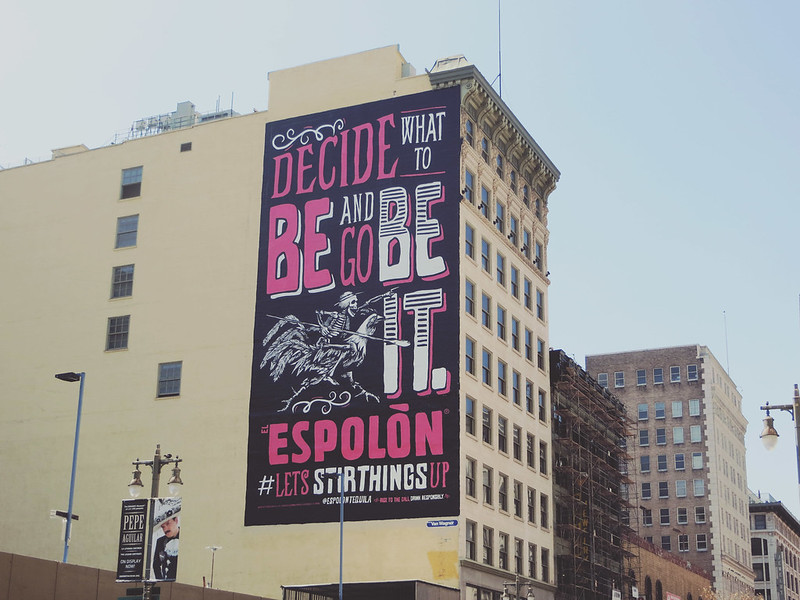 The next day was the day we were off to meet the rest of our group and start the tour.  We were meeting at 07.30 so we were up and packed early (also assisted by the jetlag) and set off to the meeting place at the Kawada Downtown Hotel.

When we arrived in the lobby it was obvious who the other members of the tour were (spot the scattered pile of suitcases and hiking backpacks!) and we sat down and waited for our Tour Leader to arrive.  I think everyone was slightly nervous at meeting the people we would be spending the following two weeks with.  Most people had come on their own and so there was a bit of chatter about who we all were and what we were expecting out of the trip, before our Tour Leader Brian arrived and things got underway.  We completed some paperwork, were given our itineraries and then we carried our bags down to the van to load up the trailer.

Trek America has various different types of tour but the one we were booked on was predominantly camping, so the van we travelled in also had a trailer for us to load our bags into, and it also had all of the tents and mattresses etc stored inside.

Our first stop in the van was to see a bit of Hollywood before going on to San Diego later that day. We went to see the Hollywood sign but it was really foggy and overcast so it wasn’t the most exciting or breathtaking sight! 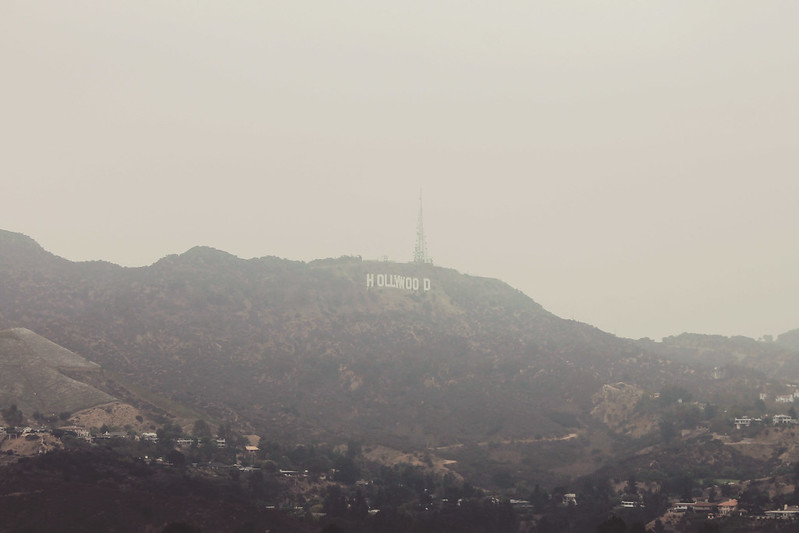 We then went on to Hollywood Boulevard which is obviously a big tourist spot and has the celebrity stars/Walk of Fame, Chinese Theatre and lots of other theatres and memoribilia shops, as well as several museums.  We explored for about an hour before heading back to the van. 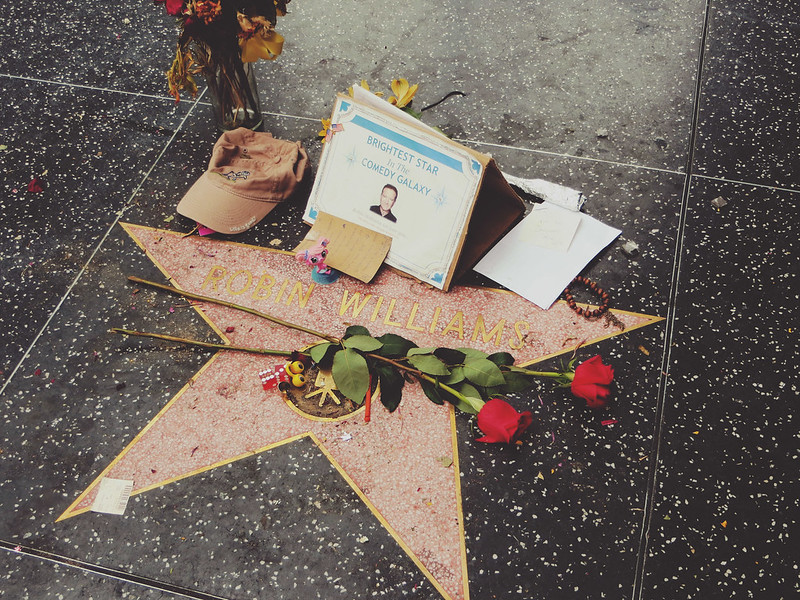 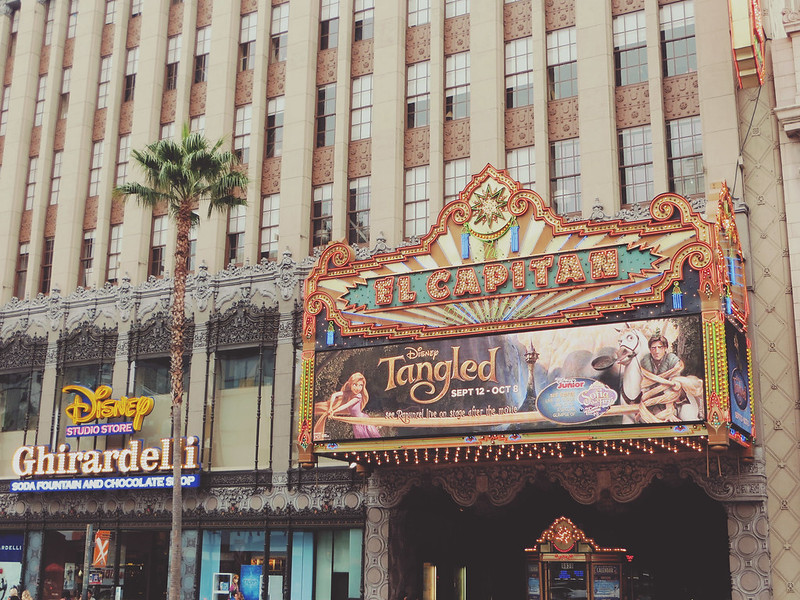 It was about three hours onto San Diego, where our first stop was Mission Beach.  We spent the journey peering through the van windows and hoping that the cloud would burn off so that we could enjoy the beach when we arrived! There were 13 of us in the group and so naturally we did some more getting to know each other – the group was made up of two Dutch girls, one German girl, one German guy, one Australian guy, two Welsh guys, one Swiss guy, three English girls and Tom and I.

We arrived in San Diego to blue skies and warm sunshine.  It was probably the first place we’d visited since arriving where I really felt like it was ‘our kind of place’.  I really didn’t enjoy downtown LA, and Hollywood was a fun place to tick off, but San Diego was beautiful from the moment we arrived.

When we arrived, the first thing on the agenda was lunch.  In the trailer, Brian had a big coolbox full of salad, wraps, sliced meat, fruit, snacks and all kinds of yummy food, and so we made wraps and sandwiches and took in the beautiful surroundings. 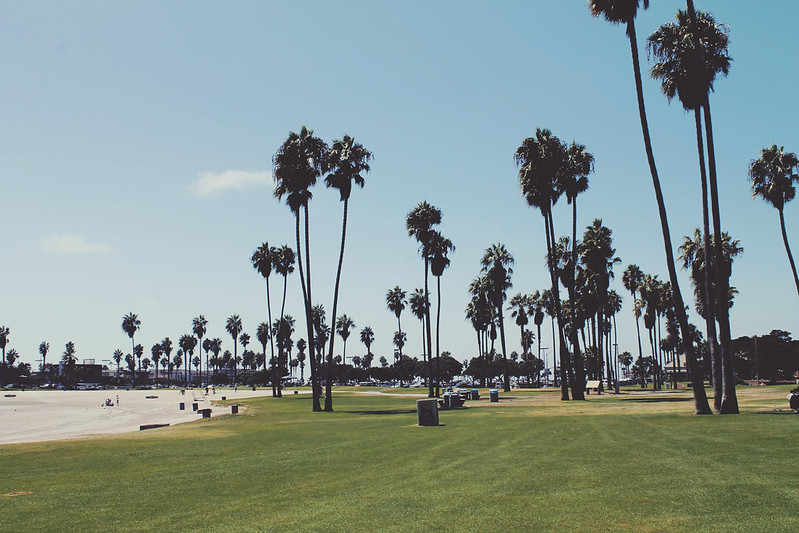 We then walked on to Mission Beach for sunbathing and swimming in the sea.  It was all of a sudden so hot and several of us got a bit sunburnt – myself included! 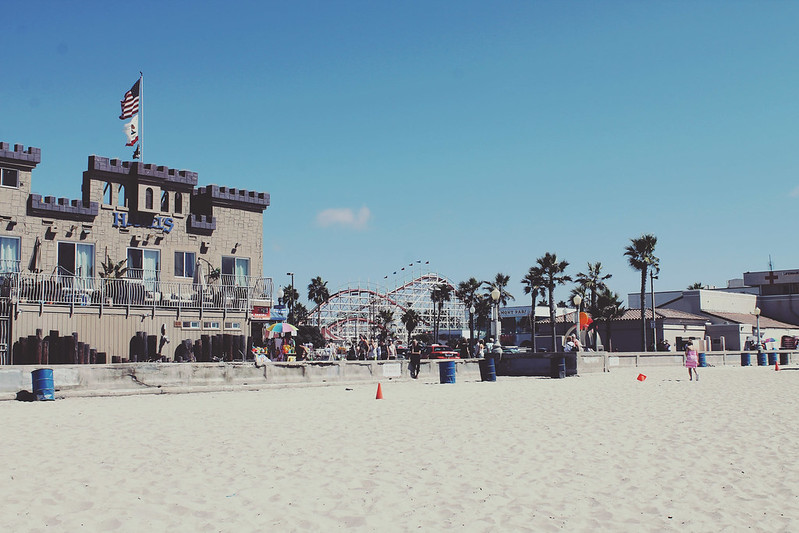 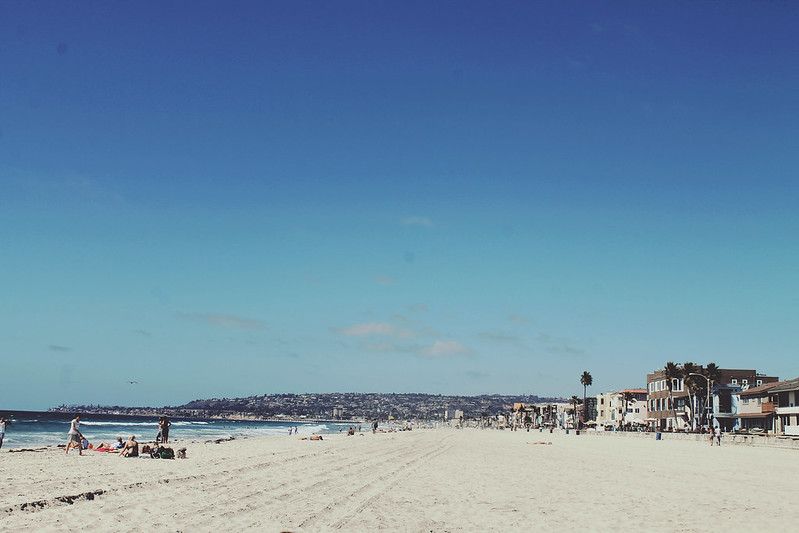 After a few hours of lounging in the sunshine, it was time to head to our campsite to set up camp for the first time.  Now – I love camping and Tom and I go away camping a lot, albeit usually in the van rather than in tents.  This was predominantly a camping trip so you obviously have to enjoy camping for it to be the right trip for you – but there are other versions of the tours where you can stay in hotels if it isn’t your thing.  This is our van and the trailer – there was lots of room for all of our bags, the tents and the coolers for food. 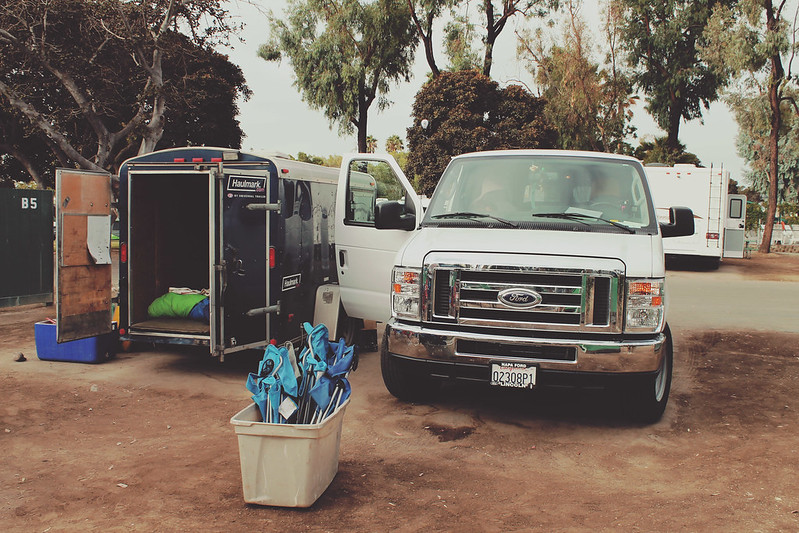 I must admit that the campsite was not like the camping experiences I am used to in Britain! There was a swimming pool, hot tub, wifi, a shop and a laundry.  We put up our tents and then got showered and changed and headed into the Gaslamp Quarter for dinner and to go to a baseball game. This is mine and Tom’s cosy little home! 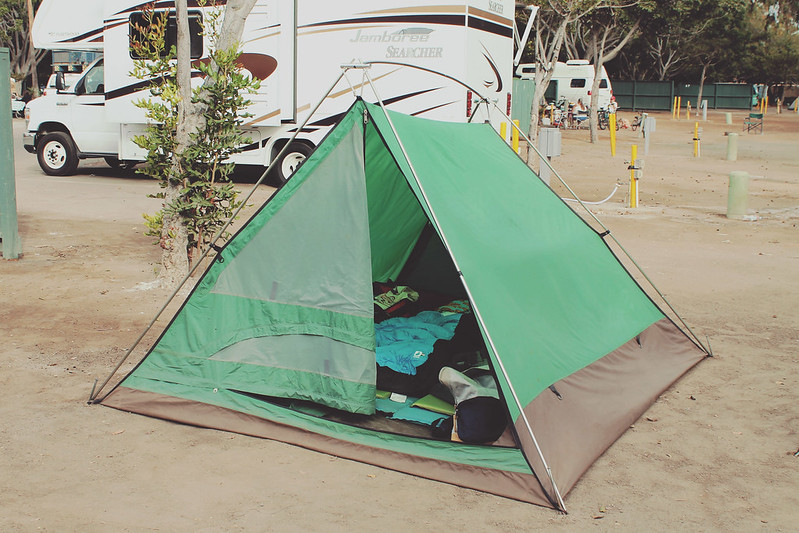 We went to Petco Park to see the San Diego Padres play the Arizona Diamondbacks, which was really fun! I loved the atmosphere there, there were loads of families out enjoying themselves, eating good food (there was so much yummy food there!) and watching the baseball.  I must admit I didn’t 100% always know what was going on in the game, but I enjoyed it nonetheless! 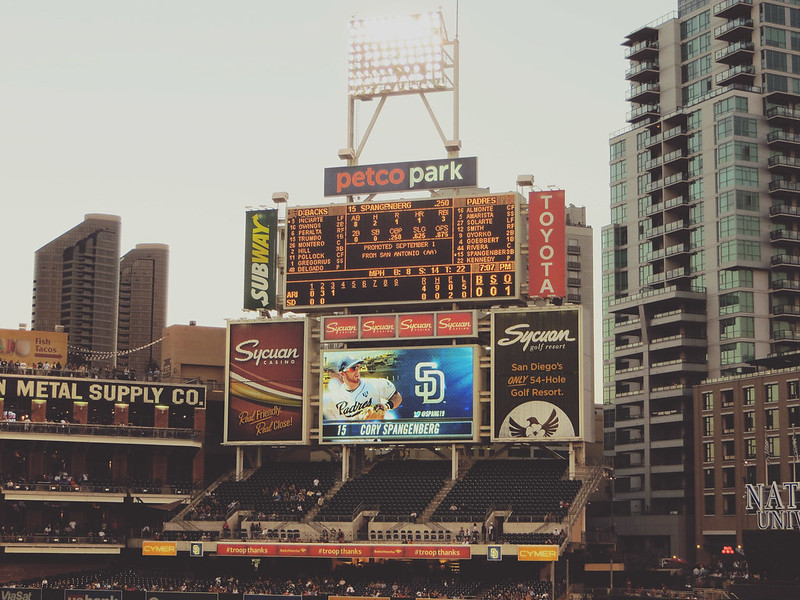 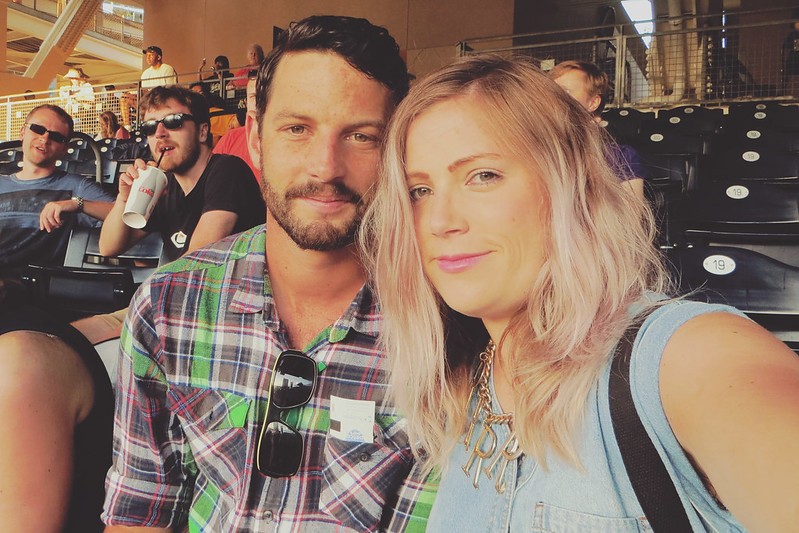 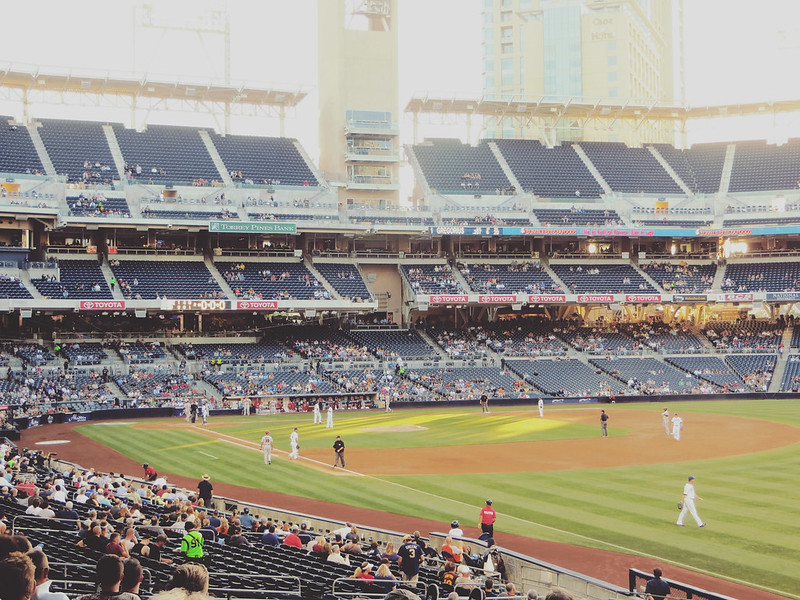 After about an hour or so at the game we decided to head into the Gaslamp Quarter to get some food. The Gaslamp Quarter is San Diego’s ‘historic district’ and is packed full of bars and restaurants.  We absolutely loved walking around – delicious smells emanating from all of the restaurants, and loads of cool looking bars, packed with people.  We chose a Mexican restaurant and had fish tacos and Sangria – so good!

After visiting a couple more bars we met back up with the rest of the group and headed back to camp – an amazing first day of our tour!

I think I’ll leave it there for the moment, I can’t believe that’s only our first day of the tour – I can’t wait to share more with you.  Let me know if there’s anything specific you’d like to know about the Trek, or Trek America in general and I can always fit in some other posts!

Hope you’re having a great Sunday wherever you are,