I can’t believe it’s two weeks to the day since we got back from America.  I refuse to believe this is true for several reasons, mainly because it feels like months ago now that my brain has been filled with unpacking, a hundred rounds of washing, new job and getting used to my new commute – but also because I can’t believe that this is the first moment I’ve had to sit down and start telling you about what we got up to.

I truly don’t know where to start with writing about our trip – there is so much to share that it just seems insurmountable to try and gather it into a format that will come in any way close to being able to describe just how amazing it all was.  And of course the beginning is a very good place to start, but I’ve decided not to do that, and instead to split it into a few bitesize chunks here and there so that a) I can try and capture some of the really special places that we went and b) it’s not non-stop America-ness on the blog from here until Christmas!

So – you all probably know by now that on 2 September Tom and I left for the USA to embark on the Trek America Westerner 2 trek, which visited lots of amazing spots on the west coast of America. One of the places Tom and I were particularly looking forward to was San Francisco, which we visited on day 11 of the trip.  We arrived at 4pm one afternoon, had a full day there the next day and left at 8am the following morning.  It truly was an incredible place (and a whirlwind flying visit!) so I thought I’d bring you a little post about our ’40 hours in San Francisco’. 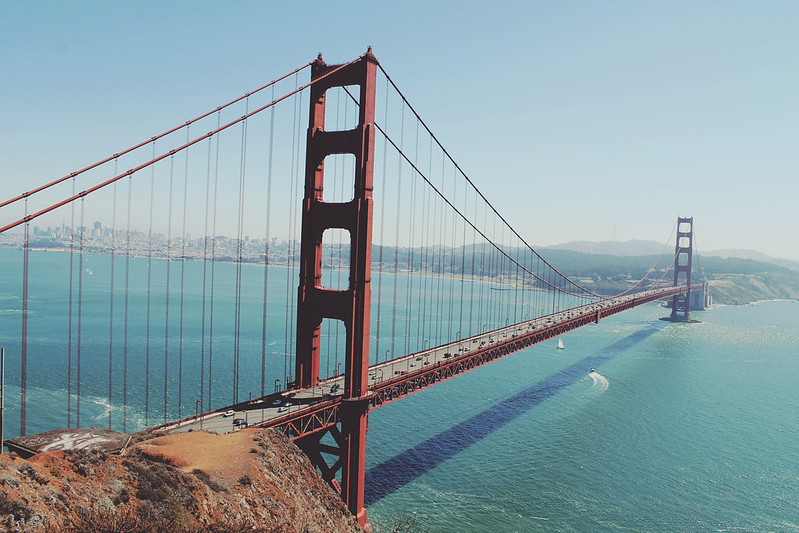 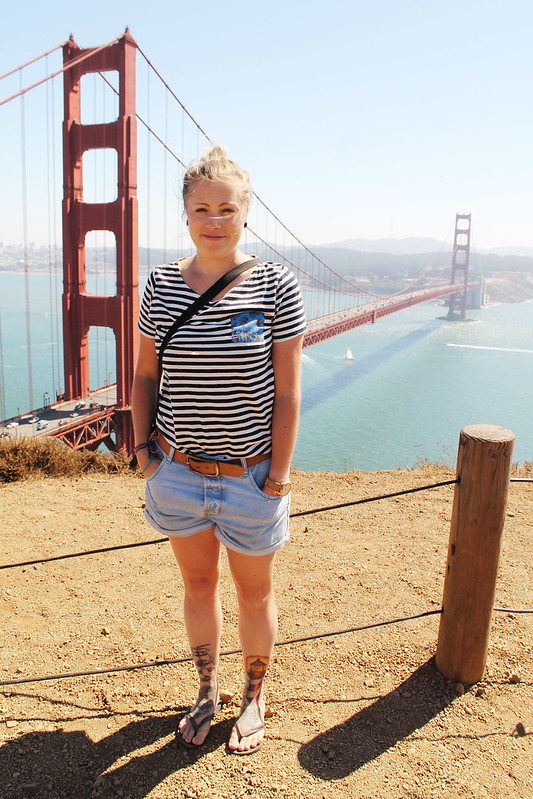 We got to view it from the viewpoint and then head down to the bridge itself and walk along it too.  As well as the walkway there’s also a cycle lane – I’d really like to ride a bike along the Golden Gate Bridge someday!

After arriving at our hotel (we stayed at Hotel Metropolis, which was included in the cost of our trek), we freshened up (baths and beds were a novelty after lots of camping on our trek!) and headed out again for an evening out on the town – and a sunset catamaran cruise!

We headed over to Pier 39, where along with there being a beautiful pier and marina with lots of restaurants and other attractions, there’s also hundreds of sea lions that live on the pier.  They were making lots of noise! (They are also pretty smelly). 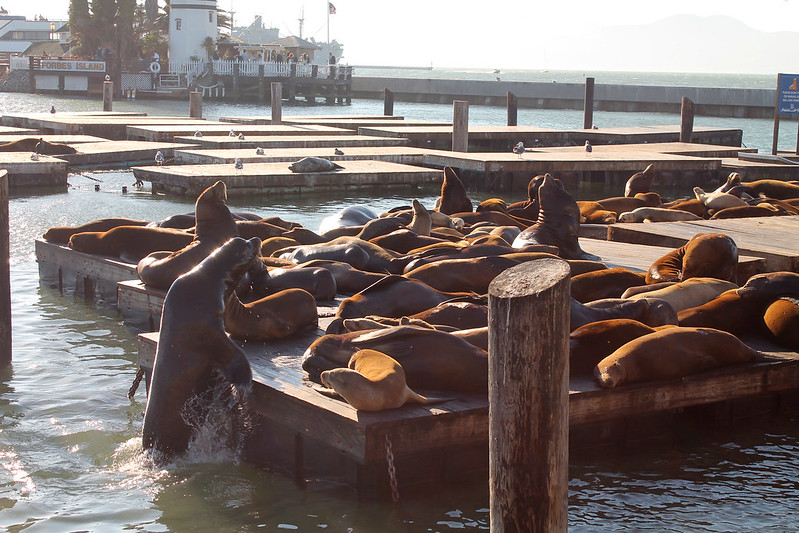 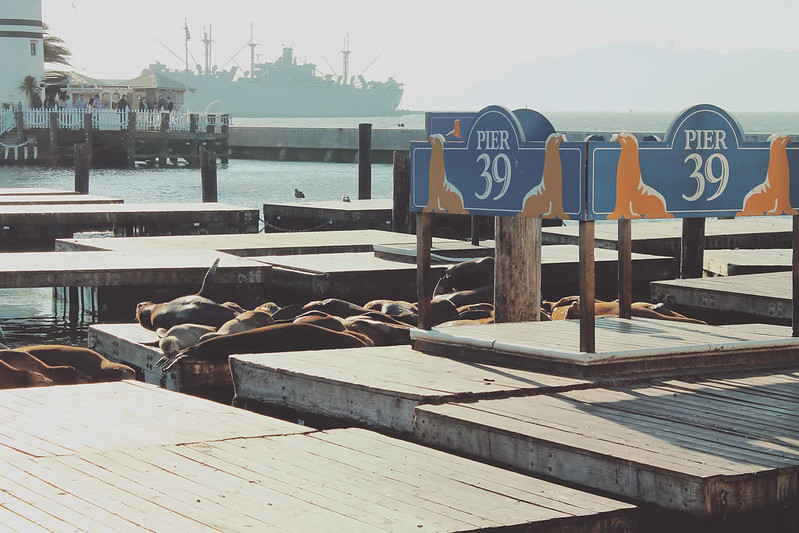 One of the things I loved about the Trek America tour was that we got to do so many unexpected and amazing things that we never would have done if we’d organised it ourselves.  One of those things came after our sea lion spotting, when we boarded a catamaran for a sunset sailing cruise on the Adventure Cat.

After boarding we sailed out of San Francisco Bay.  Watching the city grow smaller behind us and the sun begin to set, we sailed past Alcatraz Island, which was quite a sight.  It was amazing to see “The Rock” from the sea.  It was actually quite a chilling sight!  I’d love to go on a tour – we only had one full day so we didn’t really have time, but that’s a definite for next time we visit. 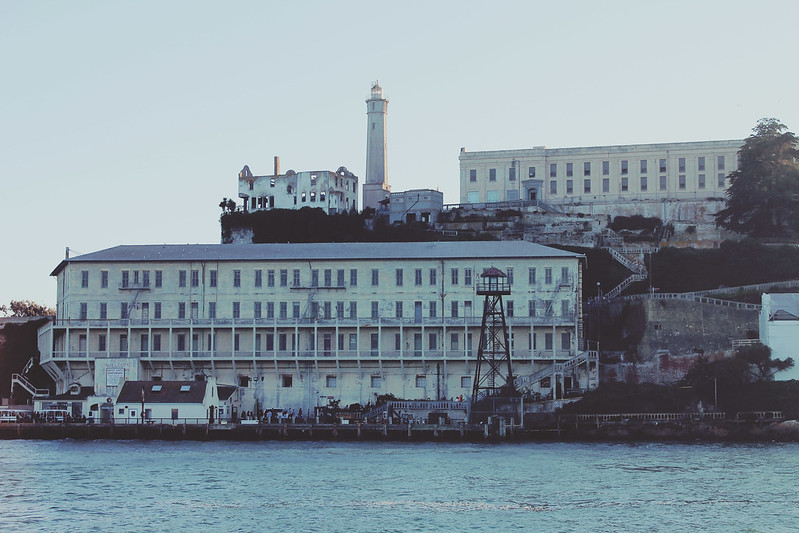 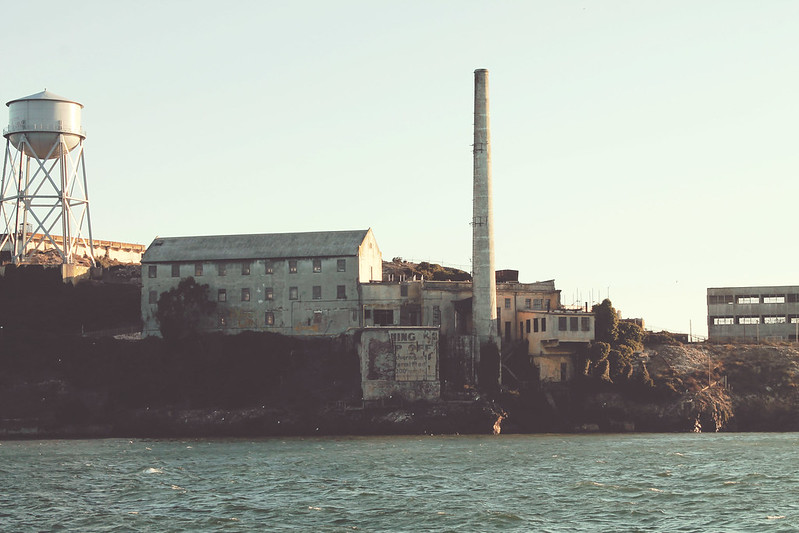 After sailing past Alcatraz Island we approached the Golden Gate Bridge just as the sun began to set. We had two drinks included in our cruise ticket so we hugged plastic beakers of wine as the catamaran sailed through the waves towards the bridge. 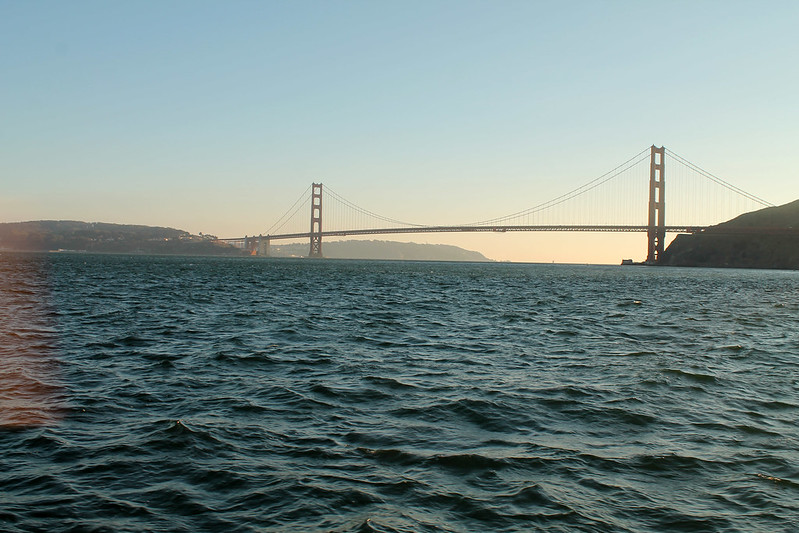 The sun nudged downwards towards the hills at the vista point, making way for its grand exit. 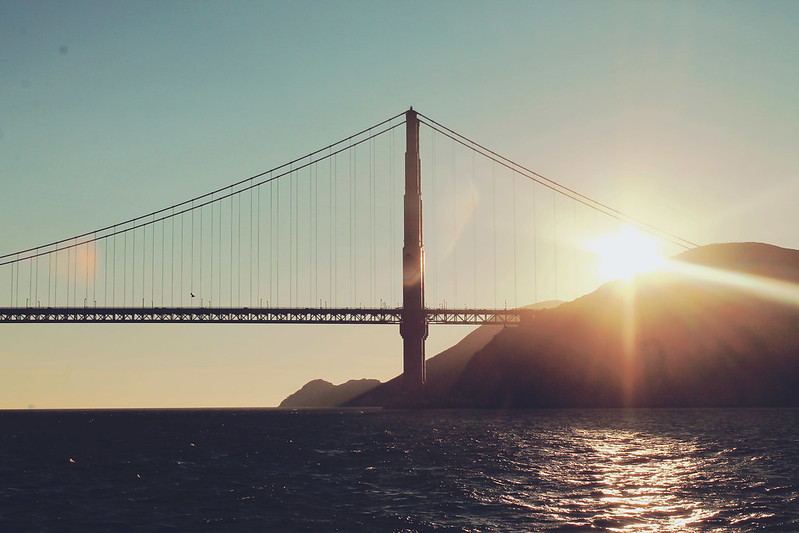 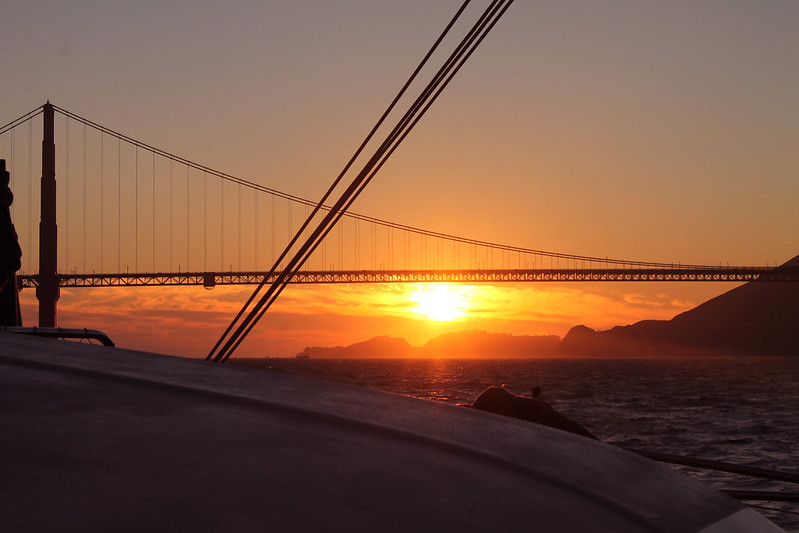 We sailed underneath the bridge itself – truly a once in a lifetime experience.  As we sailed back towards San Francisco I couldn’t help but capture a rather patriotic view – the American flag flapping away in the breeze, with the waves rolling along in the Bay – beautiful. 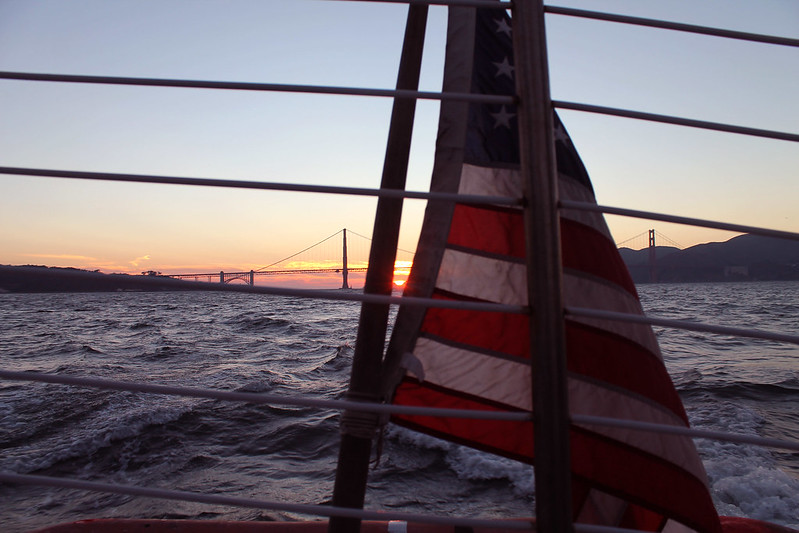 After the cruise we headed for dinner at Fisherman’s Wharf.  I had clam chowder in a sourdough bread bowl and it was incredible.  No other word for it.  After a few drinks we headed back to our hotel, eager to enjoy the comfort of a proper bed!

Day two began with us heading over to Mission District.  Mission District, or ‘The Mission’ is famous for being a little bit ‘hipster’ – punctuated by quirky little shops and vintage stores, coffee places, produce markets, street food vendors and bookstores.  We were encouraged to start our day with breakfast at Tartine.  Tartine is a bakery and café with a bit of a cult following, famous for its breakfast pastries, pressed sandwiches and coffee.  With no signage outside and a bustling but minimal interior I didn’t take any photos but trust me when I say that it was the best gougere I’ve ever had, and Tom’s croque monsieur was pretty amazing too.

We went to go to Dolores Park but it had a lot of building work going on, so we just wandered around the district itself – past bakeries and coffee shops emitting some rather dribble inducing aromas, past apothecaries, stationery shops, activist bookshops and thrift shops. 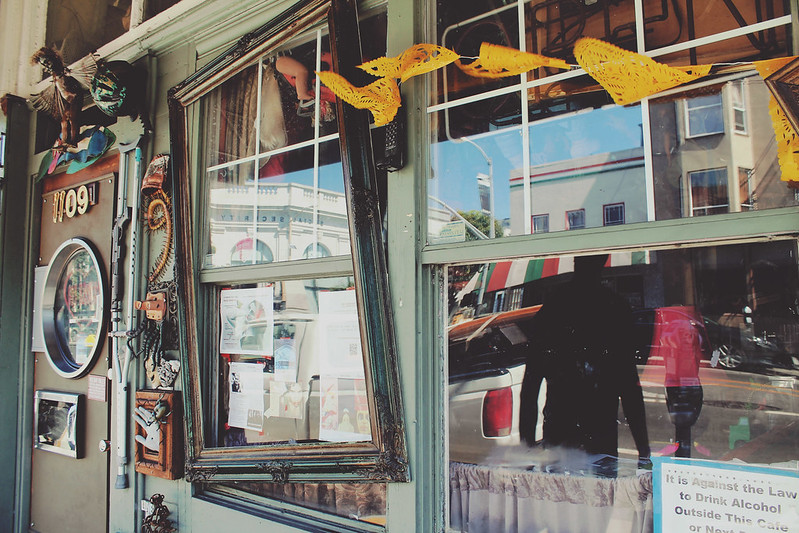 We also visited Clarion Alley, a street art project formed by an artist’s collective that also link up with lots of community projects in the District.  The artwork was amazing. 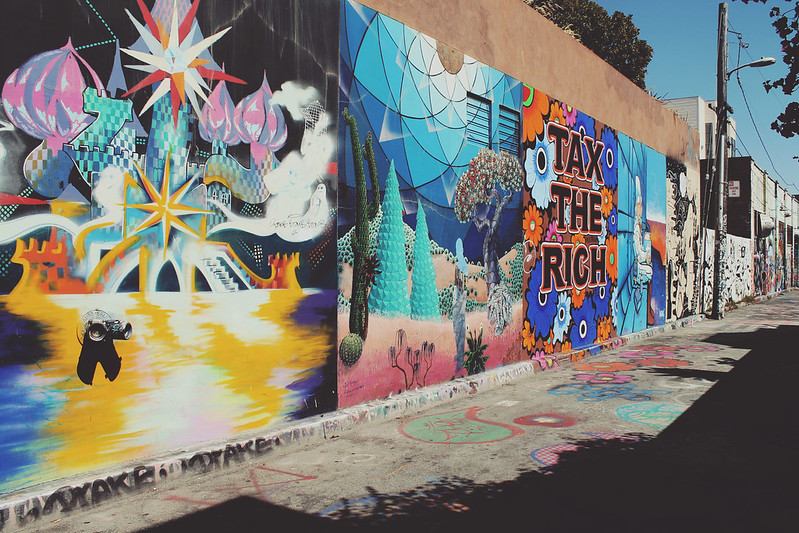 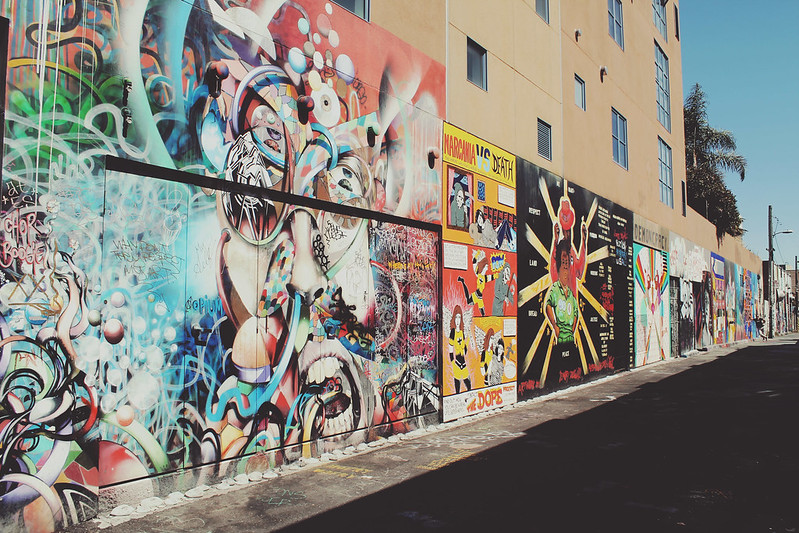 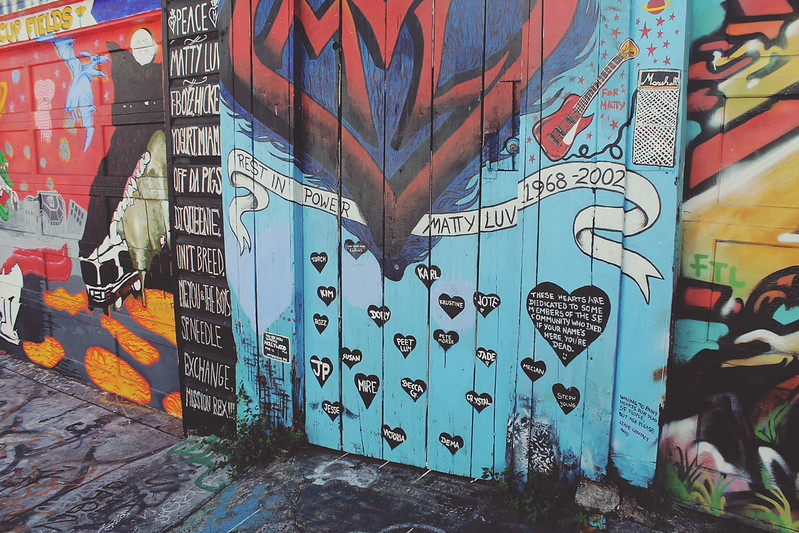 After walking around for a couple of hours, I managed to conjur enough appetite to try an ice cream sandwich at CREAM (Cookies Rule Everything Around Me).  I had snickernoodle cookie, salted caramel ice cream, then peanut butter cookie, rolled in crumbled Graham Cracker.  Taste explosion.  Best ice cream sandwich EVER. 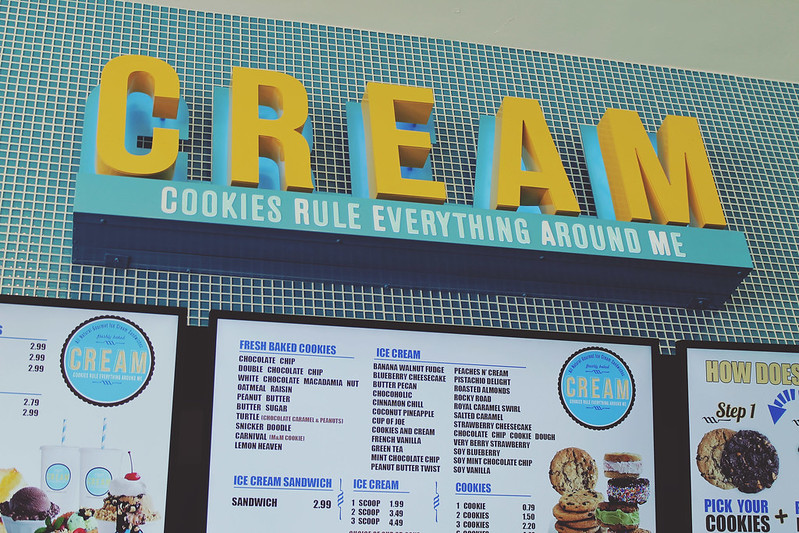 We then walked up to the Castro District/The Castro, which is the rather bohemian and cool gay neighbourhood, with lots more cool bars and shops.  We stopped for a cocktail (yes, I did eat and drink my way around our trip) and then walked on towards our next stop, the Painted Ladies and Alamo Park. 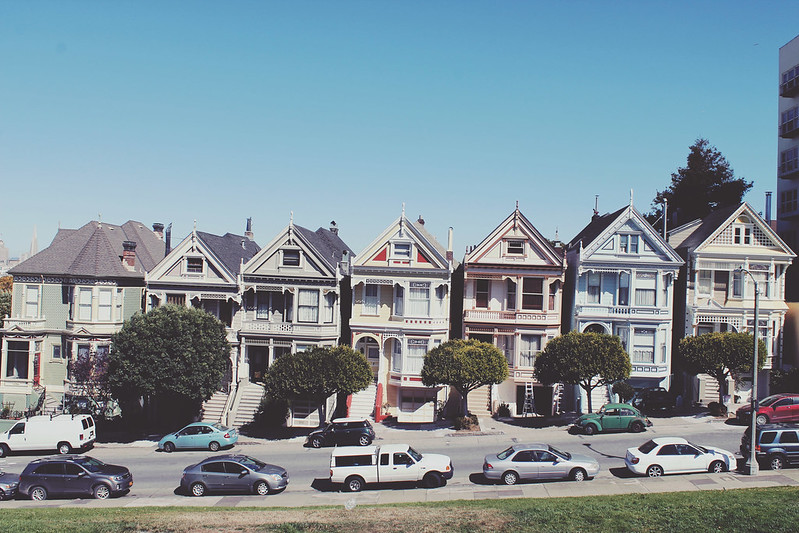 The Painted Ladies are a row of beautiful Victorian houses across from Alamo Park.  There are some utterly stunning examples of architecture in San Francisco and these houses are a bit of a tourist attraction – imagine living in them!

We then decided to walk back towards our hotel and head on to Union Square.  This turned out to be quite a long walk, past Twitter HQ (which was quite cool to see!) and through a section of San Francisco called Tenderloin which I don’t recommend you visit!

Union Square is the big shopping district with huge department stores and shopping centres.  We had a quick walk around before heading on to Chinatown. 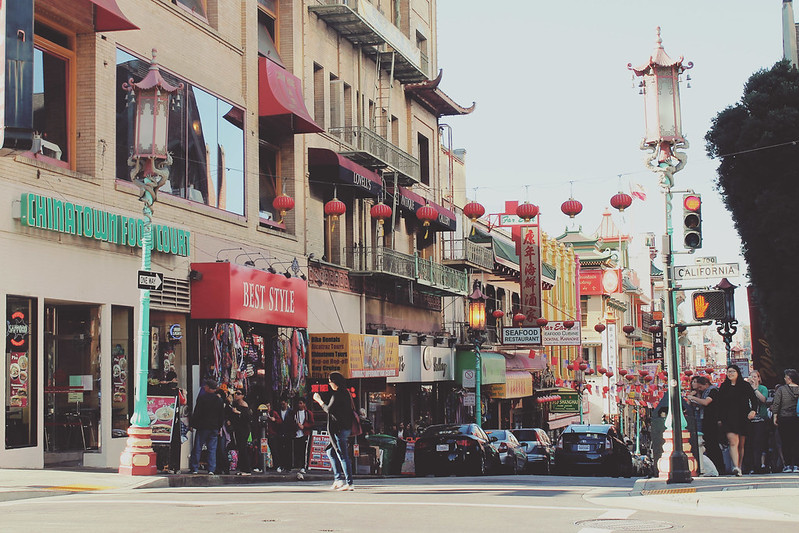 San Francisco’s Chinatown is the largest Chinatown outside of Asia, with hundreds of restaurants, shops and hotels.  Paper lanterns and banners are strung from balconies and souvenir shops line the streets. 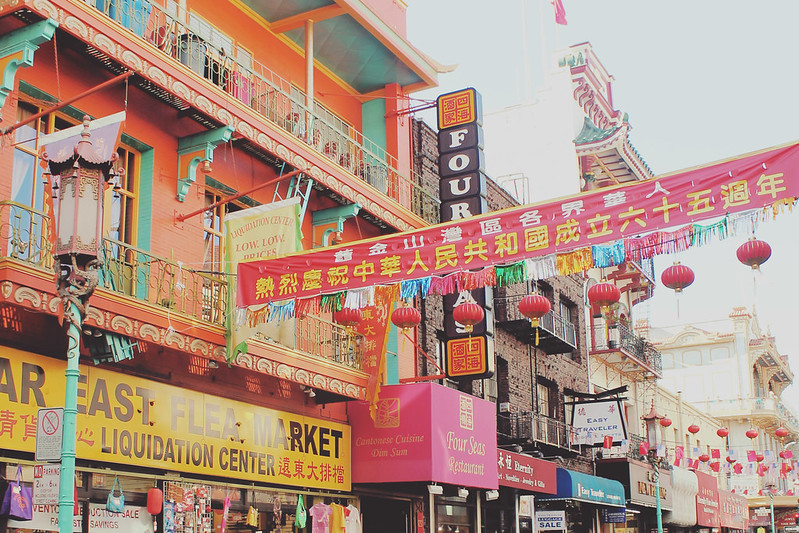 Of course we stopped for Chinese food – well, when in Chinatown….

After a really yummy dinner we walked on towards Lombard Street.  Lombard Street is famous for being San Francisco’s crookedest street, with eight hairpin turns.  The gradient of the street itself is so steep that they had to put the switchbacks in to keep pedestrians safe! After walking down some of the hill and watching people drive down taking lots of photographs, we hopped on a cable car back down to Fisherman’s Wharf.  Fisherman’s Wharf was one of my favourite areas of San Francisco, with seafood restaurants, piers and bars.  After walking for miles that day I was glad to walk to the water’s edge and cool my feet off in the sea (and meet a friendly seagull). 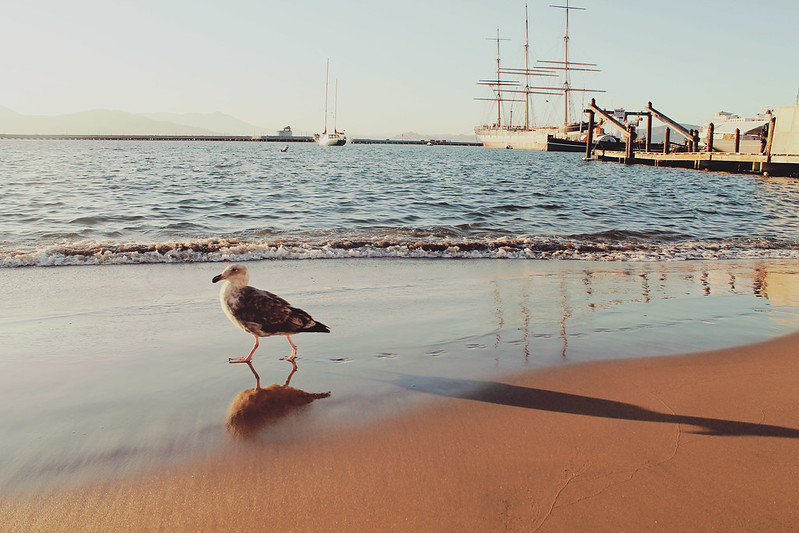 Seafood stalls line the central area of the wharf, with clam chowder being their speciality. 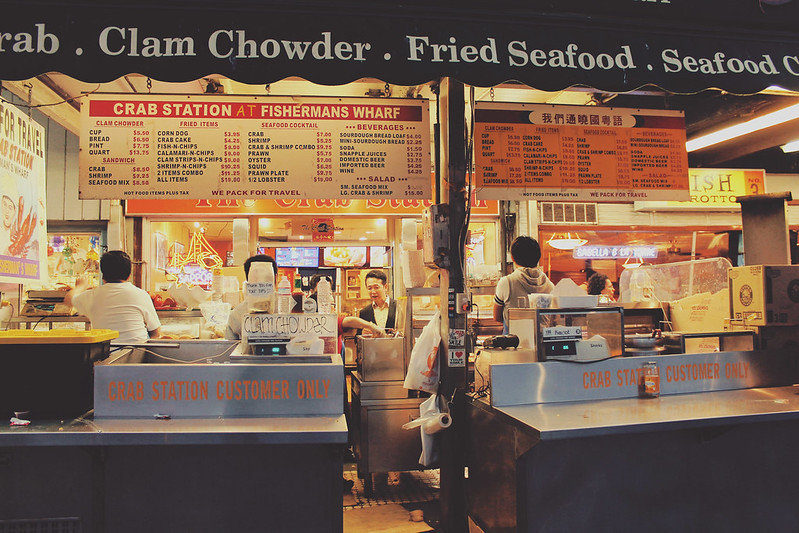 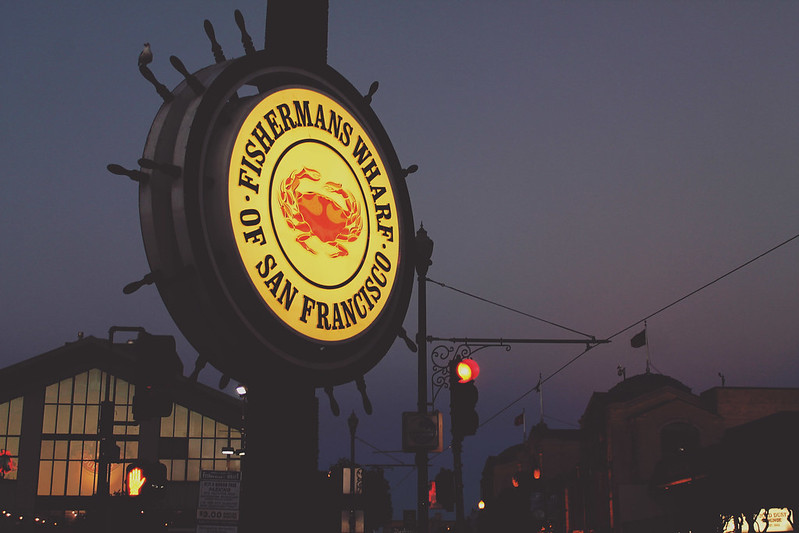 We sat outside a bar for a little while and watched the world go by, had a nose in the quirky little nautical themed shops and soaked up our last moments of San Francisco. 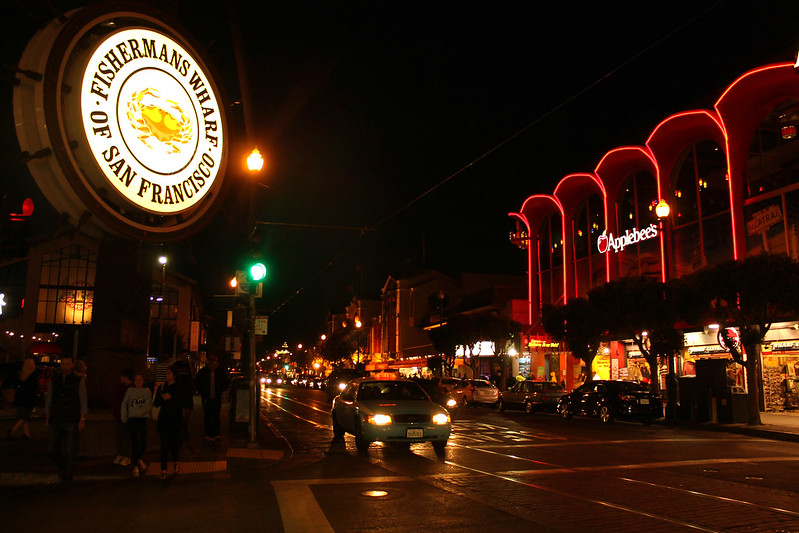 We taxi-ed back to our hotel for a long night’s sleep in anticipation of our 8am wake up call the next day for our drive up the Pacific Highway.  But that’s another story for another day….

Have you been to San Francisco? What were your favourite spots?