I don’t know what’s happened, but my inbox lately is less full of emails from fashion PRs or offers of clothing samples, and instead I seem to be getting lots of emails about food.  Clearly, I am not complaining – if there’s one thing I love in life and spend most of my waking moments thinking about, it’s food.  And whatever has caused the sea change (should I be insulted that I’m apparently currently more suited to chocolate tasting than modelling dresses?) I’m definitely embracing it.

But if there’s one food related campaign that’s definitely trumped them all of late, it’s this one from Movenpick – do I want to receive some yummy ice cream and sundae glasses? YES.  And whip up some recipes with said ice cream for the chance of winning a masterclass with a pastry chef? Well, durrrrr. WAIT – by whip up a recipe do you mean eat it out of the tub with a spoon? Um, no.  Hmm, this one is definitely going to be slightly out of my comfort zone…

So, having established that the most creative I usually get with my ice cream consumption is to eat it out of a bowl rather than straight from the carton, I needed to put some serious thought into my ice cream recipe making, and find out more about the ice cream in question – Movenpick.  Movenpick was a serious case of the Baader-Meinhof phenomenon (okay fact fans, here we go – the Baader-Meinhof phenomenon is where you come across something new, a word, a band, a name, etc, and then all of a sudden, you go from not happening upon it for your entire life, and then all of a sudden it’s everywhere).  ANYWAY – so, uncultured in the world of ice cream as I previously was, I’d never heard of Movenpick, and then all of a sudden it was everywhere I went, and everyone seemed to be raving about this rather dreamy sounding Swiss ice cream.  I needed to investigate.

Movenpick kindly sent me an Ocado voucher to pick up my choice of flavours and start experimenting.  My first challenge was narrowing down which flavours to try.  In the end, I went for Caramelita, Raspberry and Strawberry and Maple and Walnut.  I got stuck into the Caramelita as soon as it arrived – and it was heavenly.  In fact, I got a little carried away and ate half of the carton before I remembered I was supposed to be crafting a recipe…


Inspired by a recipe on MyRecipes.com I decided to make a sort of chocolate and peanut butter arctic/swiss roll.  I figured that by combining three of my favourite things – brownies, peanut butter, and ice cream, what could go wrong? I used a box brownie mix to speed up the recipe but obviously you can use your own brownie recipe if you have a favourite. 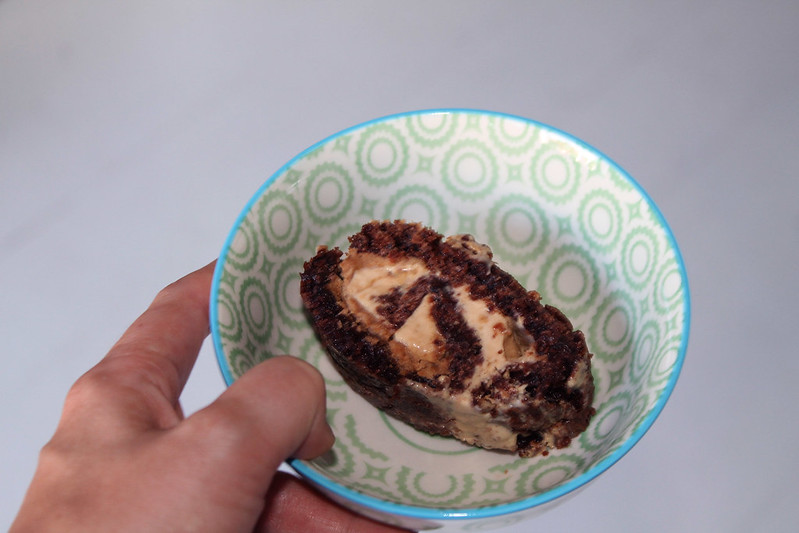 1. Preheat the oven according to the brownie mix instructions.  Grease a rectangular baking tin (I used a 12 x 15″ roasting tin – I’d recommend something slightly smaller) and line with baking/parchment paper.  The package instructions will probably recommend an 8″x8″ brownie tin but you need a rectangular baking tin in order to achieve the shape required for the roll effect.

2. Prepare the brownie mix according to the package instructions and pour the batter into the tin.  You want to aim for about half of the thickness you would usually use for brownies to achieve the ‘swiss roll’ effect. Use a spatula to smooth the surface of the batter.

3. Because of the difference in thickness, the brownie mixture will probably take a little less time and you want to take it out when it is just done – mine took between 15 and 20 minutes (the instructions recommended 20-25 minutes).  Remove pan to a wire rack and let brownie cool.

4. Once brownie has cooled, run a knife along sides of pan to loosen it. Place a piece of parchment as big (or larger) as your baking tin and invert brownie onto a baking tray and peel off parchment.

5. Refrigerate ice cream to soften, should take about 10 to 20 minutes. In a medium bowl, mix honey, vanilla and peanut butter. Using a knife or spatula, carefully spread peanut butter mixture evenly over brownie, leaving a 1-inch border on each long side.

7. With one long side of pan facing you, carefully lift parchment under brownie and roll brownie into a swiss roll, laying it seam side down to seal. Put in freezer immediately and freeze for at least 2 hours. Dust with unsweetened cocoa powder, if desired.

I took this out of the freezer after a few hours and sliced it up like swiss roll and it was incredible. The hard crust of the brownie, the smoothness of the peanut butter and then the creamy ice cream were the perfect combo! 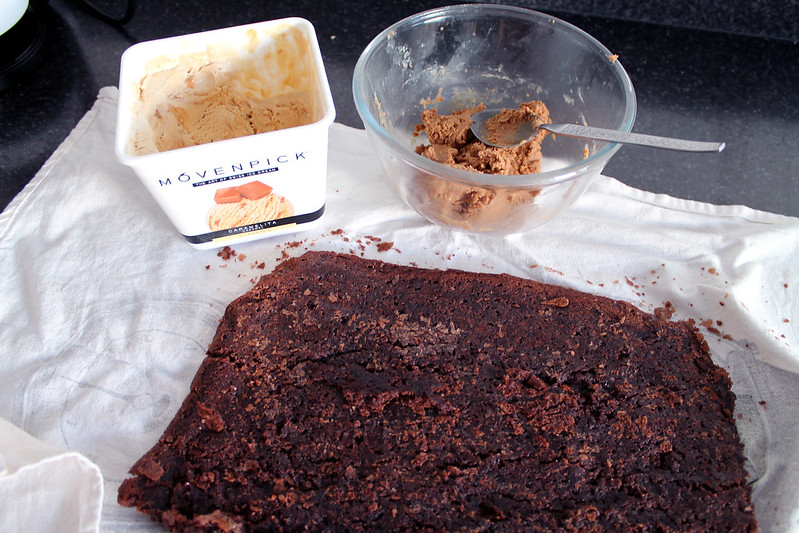 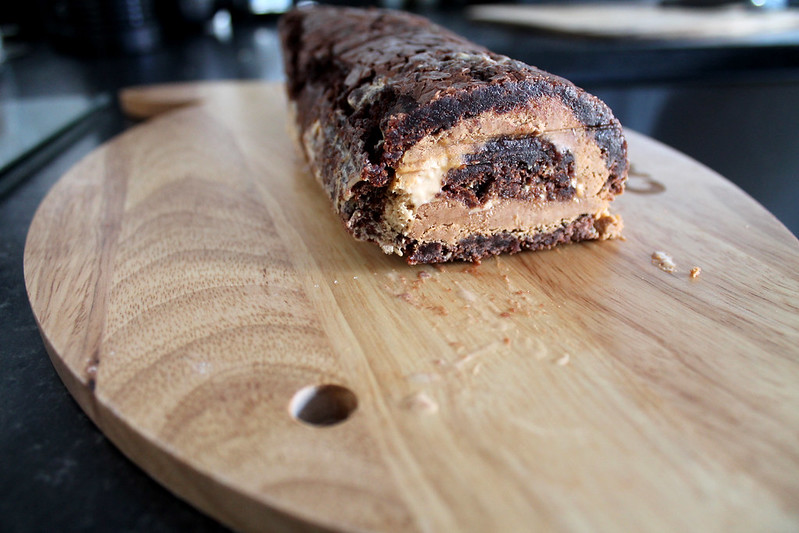 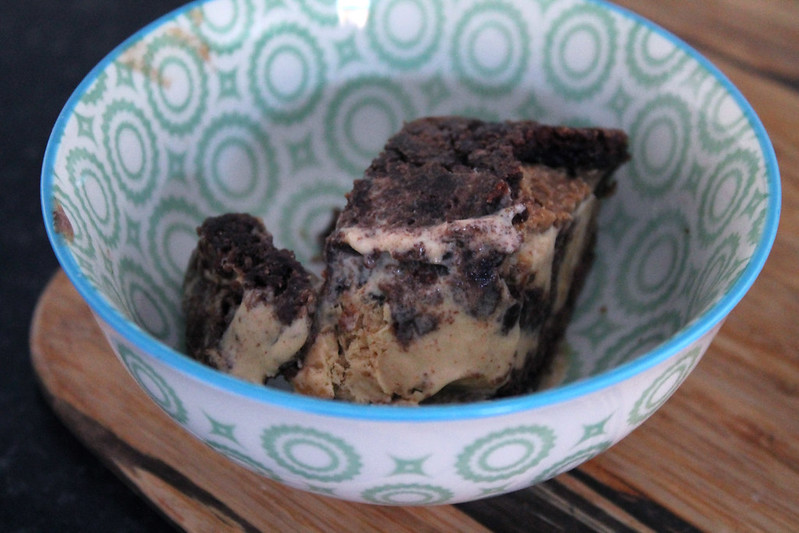 Even though I just ate some more of this about half an hour ago, just looking at those photos is making me want to head to the freezer again!

I’m excited that I still have two more flavours to try – do you have any recommendations for recipes I should try with these? (Or shall I just go back to my old ways of spoon and tub….?) 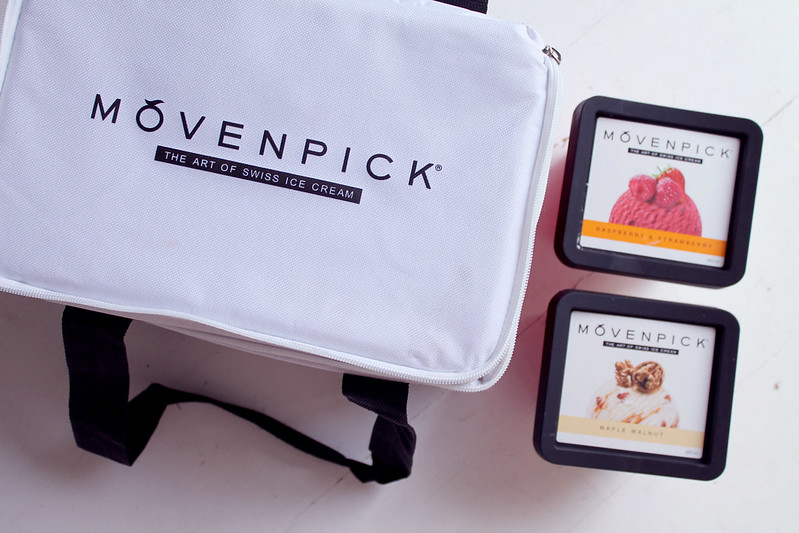