I can’t say I’ve ever properly ‘celebrated’ Easter before, other than to scoff chocolate and revel in the extra days off, but something about the ending of Lent this year has made Easter feel like more of an occasion. I Spring cleaned the house on Friday, threw all the windows open and enjoyed the fresh air and sunshine (before it went away today), filled a vase with daffodils and also baked and concocted some treats to be enjoyed over the weekend.  It also coincided with Tom coming home after being away for the week training, so I created a little spread on our dining table of Easter eggs, flowers, and a card for our -1 Anniversary (it was a year until our wedding day on Thursday – 362 days to go!)

As you might know by now, I’m part of a group of ‘Oven Pride‘ bloggers, meaning that on a monthly basis we get set kitchen based challenges (and of course have the ability to leave our ovens sparkly clean afterwards!)  This month it was a very apt, Easter baking challenge – I would have got stuck into it earlier but the thought of melting chocolate to make eggs without being able to dip my finger in the chocolate seemed positively unimaginable!  This was my chocolate egg making kit – silicone moulds, chocolate for melting, and a chocolate melting pot. 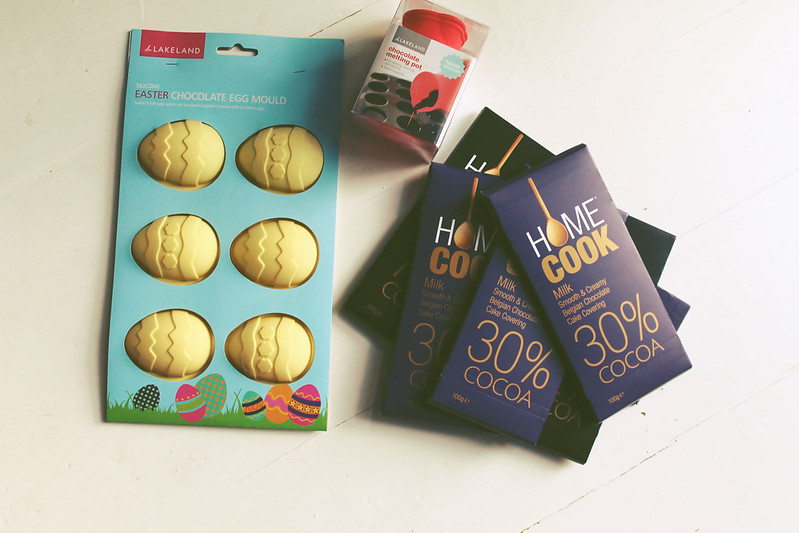 I made these on Friday morning, and breaking off a corner of the chocolate pre-melting was my first taste of chocolate in 45 days! It was rather lovely I must say – I expected an instant headache or wave of nausea but it was like I’d never stopped eating it!

The easiest way to make chocolate using a mould is to ‘paint’ the melted chocolate onto the mould several times, leaving the moulds to set in the fridge each time and continuing until you reach the desired thickness. To ‘glue’ the halves of the eggs together you just use more melted chocolate on the edges, push them together and leave them to solidify.  My eggs were not the neatest eggs ever, but it was a lot of fun (and mess!) making them.  I must admit I ended up with melted chocolate on my jeans, hands and arms, which is exactly the image I had in my head when I imagined my first day of being able to eat chocolate again after six weeks! 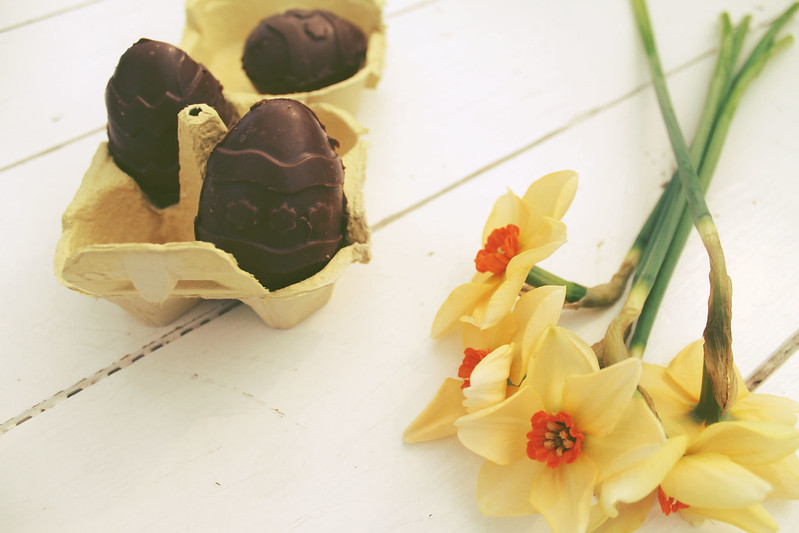 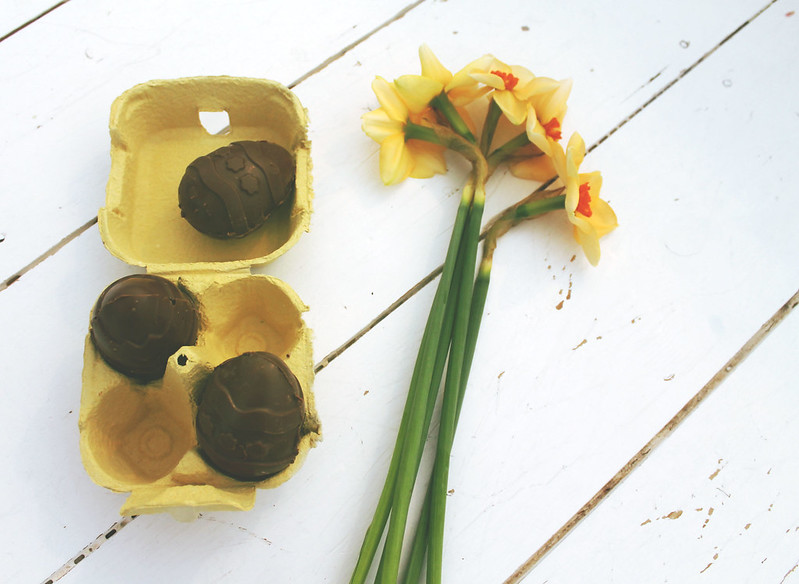 The eggs were relatively easy, and quick to knock up, but my next adventure in Easter cookery was rather the opposite! This time we were given a voucher to buy the ingredients for hot cross buns, the perfect Easter Sunday breakfast treat.  I used a Delia recipe, because, well, you can’t beat Delia can you? I’m not going to include the recipe in this post but if you’d like to make some too you’ll find the recipe here.

I haven’t made any bread products before, that’s rather Tom’s domain in our kitchen, so I wasn’t prepared for the amount of kneading and proving!  After its first round of kneading and proving, the dough was left to rise in our airing cupboard – then I checked the recipe and realised we didn’t have enough time to give them their second proving and bake them before going out last night, so they had another stint of proving in the fridge overnight.  This morning the dough was rock hard (and freezing cold!) so back in the airing cupboard it went! I then had to separate them into individal ‘buns’ and – you guessed it – leave them to rise for a final time under a teatowel!  After making the crosses with flour and water they were ready for the oven. 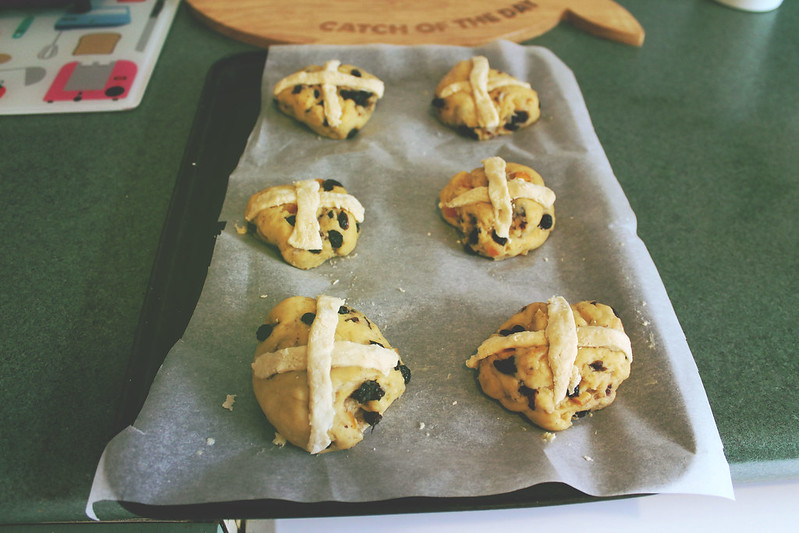 Luckily for my parents, the buns being taken out of the oven coincided with their arrival at our house this morning, so they were treated to buns straight out of the oven.  Served with lashings of butter of course! 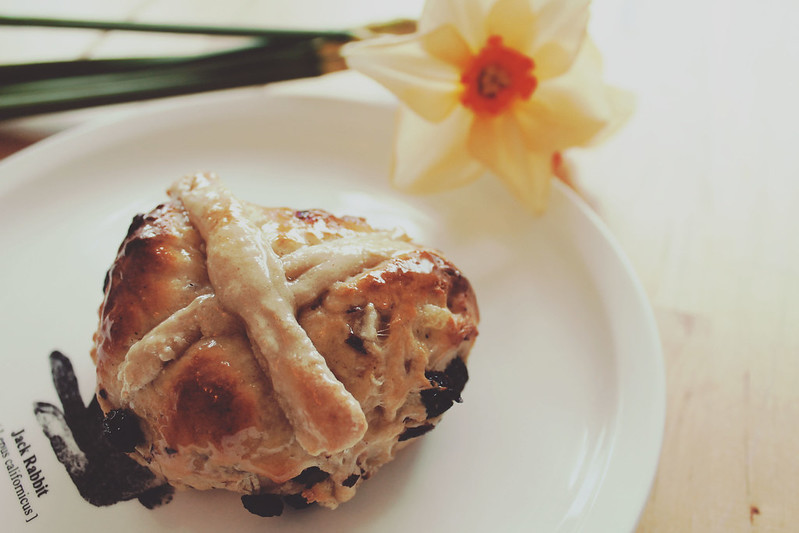 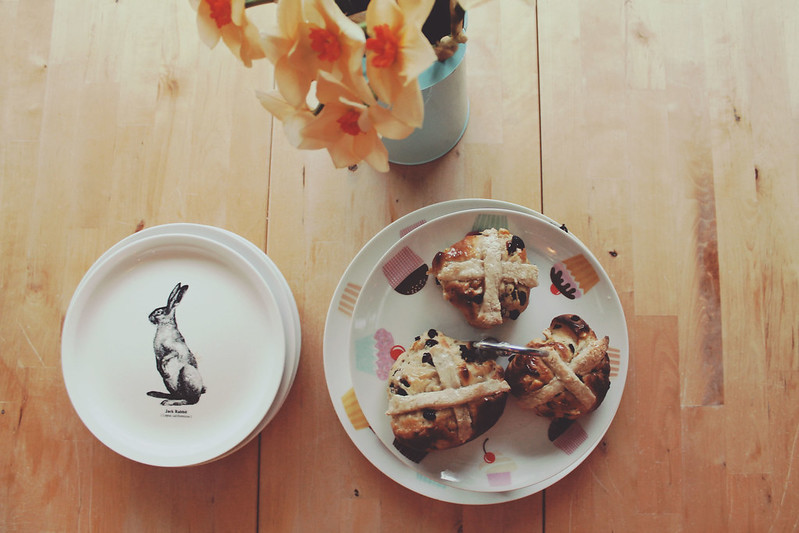 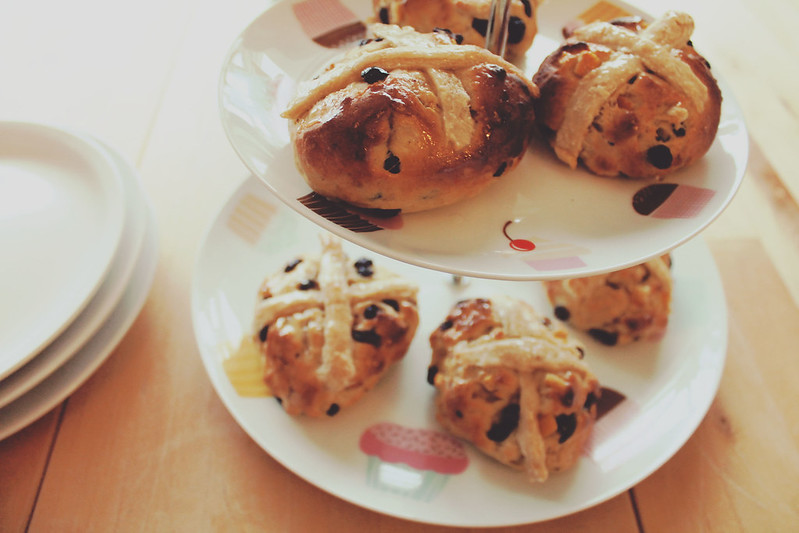 Even though they were rather a labour of love, I can honestly say that they were well worth it – they were utterly delicious! So much better than buying them from the shop, they were sticky, doughy, light, tasty and totally flavoursome.  I would absolutely make them again, though perhaps I’d make sure I got the timings right so they didn’t have to spend quite so much time in the airing cupboard next time!

Thank you so much to Oven Pride for providing us with the ingredients to make such delicious Easter treats – it was so much fun celebrating Easter with such tasty treats!