It is impossible to escape the chatter about Game of Thrones at the moment.  From friends on Facebook and Twitter staying up to catch the premiere of Season Four, to discussions in the work tearoom about which characters have most recently been killed off, to spotting commuters eagerly digesting the books, it really does feel like it’s the TV series on everyone’s lips – and Sky + Planners.  For those of you not familiar with Game of Thrones (if so, where have you been??), it is a fantasy/drama TV series based on the books of George R R Martin and interweaving lots of plot lines including civil wars, mythical creatures, impending winters, and bids for the throne.

It was that ubiquitous buzz that had me ordering the first disc of the first series from Lovefilm last year.  From the first watch, Tom was hooked, whilst I was a little more unconvinced, finding the plot lines hard to follow at times and annoying Tom with my constant questioning of ‘Who’s that?’ or ‘Which house are they from?’ In the end I must admit that my commitment to GoT started to trail off and I found myself more commonly opting for blog reading or bubble baths rather than swordfights and conspiracies.

Because of Tom’s love for TV and my love for all things blog-related, we find ourselves in different rooms of the house more often than is probably healthy or preferable of an evening.  We do try and have date nights and we have a couple of programmes we both watch together (*cough* Valleys *cough*) but I’d definitely like to make more time to have lazy evenings together on the sofa, snuggling under our lovely Avoca blanket and chomping through a big bag of popcorn! 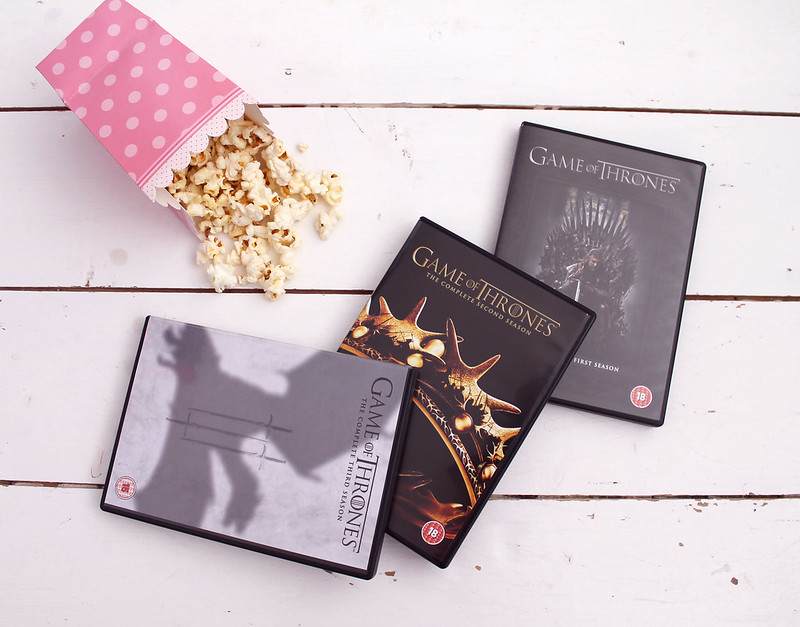 Recently, Tom has been begging me to give GoT another try so that he has some sofa company and someone to chat about it with, so he firmly had last Tuesday scheduled in his diary for a catchup on what’s happened so far, and of course watching the first episode of the new series.  We were treated to an absolutely amazing gift by Birds Eye to accompany our ‘Game of Thrones Night In’ in the form of a hamper of treats to enjoy whilst watching it.  When I opened the hamper I was absolutely gobsmacked….

We were treated to an absolute wealth of amazing bits, including Game of Thrones goodies like a lunchbox, coasters, notebook, beer glass, wine glass and the previous box sets (homework for me!), as well as onesies for Tom and I to don whilst enjoying GoT, slippers, sweeties and vouchers for some yummy Birds Eye goodies.  Birds Eye are launching a great new campaign called #foodoflife, which champions real food and bringing families together at meal times, and I can’t wait to tell you more about it and blog about the yummy food I spend my vouchers on (fishfinger sandwiches will definitely be happening!)