I feel like I have a lot to share, as always, relating to my health and fitness progress over the last couple of weeks. But first of all I wanted to start with a thank-you to everyone who has read my updates, commented, tweeted and supported me over the last few weeks.  Even though I feel like I’ve been on a health/fitness/diet journey for about the last five years, it’s really only in the last year or so that I’ve been really learning more about it and trying really hard to keep on track, and the knowledge I’ve gained through other bloggers and through chatting to people on Twitter has really been amazing.  I’m also grateful to people who regularly visit my blog that I’ve been able to slot in this relatively new topic and that (I think!) people have still been reading it and not giving it the swerve!

Those of you who follow me on Twitter might know that I gave up (refined) sugar for lent.  I’ve always been a total sugar monster, with a huge sweet tooth and the ability to devour multiple chocolate bars in one sitting, and over the preceding few months I’d found myself more and more eating sweets, chocolate, cake and all of the other sugar-y treats, and craving them throughout the day.  I thought this would be a good challenge, and I’ve always been a bit of an ‘all or nothing’ person – I somehow find it easier to have the willpower for complete abstinence rather than ‘a treat now and then’.  I can’t say it’s been easy – I have turned into an obsessive label checker after discovering that loads of food items I eat and would never have thought had sugar in them – Matteson’s chicken bites, mayonnaise, soy milk, coleslaw, dried fruit, bread, etc – do indeed have sugar added to them and are now off the menu.  I have certainly had to cut out more than I originally planned! I have also found it challenging to decide whether some things are ‘allowed’ – I have allowed the odd artificial sweetener in (otherwise I couldn’t have my protein shake), and Sweet Freedom (a fruit based syrup) but even fruit itself has a bit of a question mark as a lot of people who give up sugar also give up fruit. You will see from my food diary however that I have still been eating fruit as it seems right to include it as part of a nutritious and healthy diet, which of course is the ultimate aim.

So, here is my food diary for last week.  I’ve also included any exercise I’ve done, I tried to do something active every day, which I did do except for Thursday.

Exercise: Rode my bike to and from work (10k)

Exercise: Rode my bike to and from work (10k) 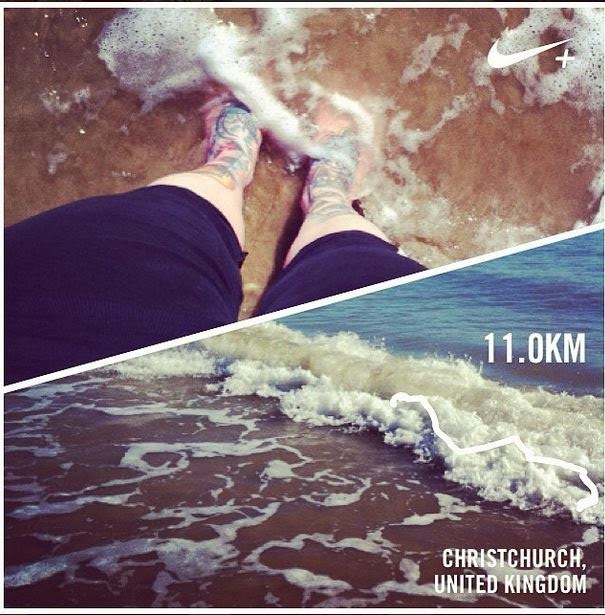 Obviously there are a few dinners in there that were less than perfect – we went for dinner with Tom’s parents on one evening, and had a takeaway for my Dad’s birthday on the Tuesday, but my aim is to make good choices at least 70% of the time and allow myself a bit of flex, which I do feel like I’ve achieved.  As always, any tips, suggestions or help on my diet and food choices is massively appreciated!  I was also chuffed to do an 11k run on Sunday – it wasn’t the fastest run in the world (about 1h 15) and I had a pause to dip my feet in the sea (bliss!) but it was a lot of fun and felt like a good achievement.

I’ve lost a lb this week which is positive but I’m trying to focus on body changes and measurements rather than on the scales as it was really starting to demotivate me going weeks without ‘losing any weight’.  I will be away from home for two weeks from next Monday which will be a bit of a challenge but I’m hoping to fit lots of running in in the evenings to keep my fitness up.

Do you have any health and fitness goals? How have you been getting on over the last week?