Our kitchen has always been a little thorn in the side of our otherwise, mostly, lovely house.  In fact I refused for some time to even come and view the house when it was for sale because I thought the green kitchen was so hideous.  In the end this was the house we picked (for that little word that has a lifetime of DIY behind it – ‘potential’) and we have come to accept, if not love, the green cupboard doors, green work surfaces and general higgledy piggledyness of the layout.

When we first moved in there was grotty, tired lino on the floor but Bodhi’s claws soon put paid to that.  When he was a puppy he would scratch at the kitchen door in the night and during the day if we went out, until eventually a small hole he’d dug in the lino turned into a very big one and we had to rip it all up.

Underneath the lino was the same original floorboards that extend through into the lounge.  When we moved in we sanded and varnished the floorboards in the lounge but we hadn’t yet done anything to them in the kitchen and they had begun to look very dirty and unloved, not to mention that the gaps and holes between them were gathering dirt from the garden through the back door, stray bits of dinner that had fallen onto the floor and other general muck that was almost impossible to get out.

Last month I was lucky enough to be picked to be a Pride of Oven Pride blogger, meaning I’ll be working with them over the coming months as part of campaigns and blogger challenges.  We frequently use Oven Pride to keen our oven looking nice and clean, but the rest of the kitchen rather lets itself down, so I was really excited to find that their first blogger challenge was to spruce up your kitchen for a fresh start in 2014, via the help of a £50 High Street Voucher.

Although I was tempted to treat myself to a new smoothie maker, or some pretty new crockery to go in the cupboards, I thought this was a great opportunity to do something worthwhile with the money, and get started on a project we’d been meaning to do for some time – operation kitchen floor.

I bought an orbital sander, some wood filler and a big tub of floor paint, and Tom got to work filling all the holes in the floorboards.  I only thought to take a picture after he’d done all the wood filler but by the amount of it on the floor you can tell just how gappy and unkempt it was! Apologies for the messy kitchen – did not intend for my fox lunchbag and Tom’s jar of sourdough to make an appearance in this blog post! Tom did some more wood-filling and sanding on Sunday afternoon whilst I was in London, we then had to call out a gas engineer as when we moved the cooker it smelt very strongly of gas.  The man that came very helpfully pointed out that the gas hose hadn’t been properly fitted by the previous owners, in another example of just what a botched job most of the things in our house are!)  After that was fixed, the first coat of paint came down, meaning Bodhi has been sleeping upstairs all week to allow it to dry overnight, which is a real treat for him!

We’ve been doing a new coat of paint in the morning and evenings and I think it’s pretty much there now! We just need to lay down a metal divide between the kitchen and living room so it looks more natural where the paint ends and the natural floorboards begin.  What do you think? 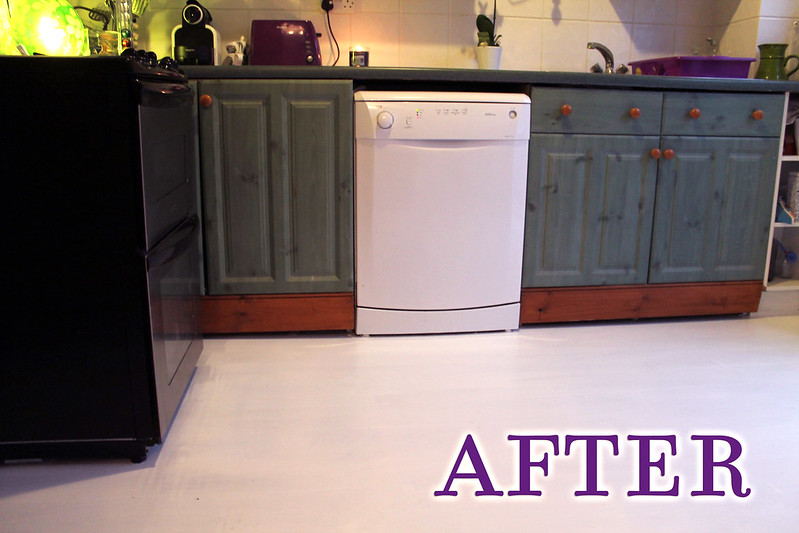 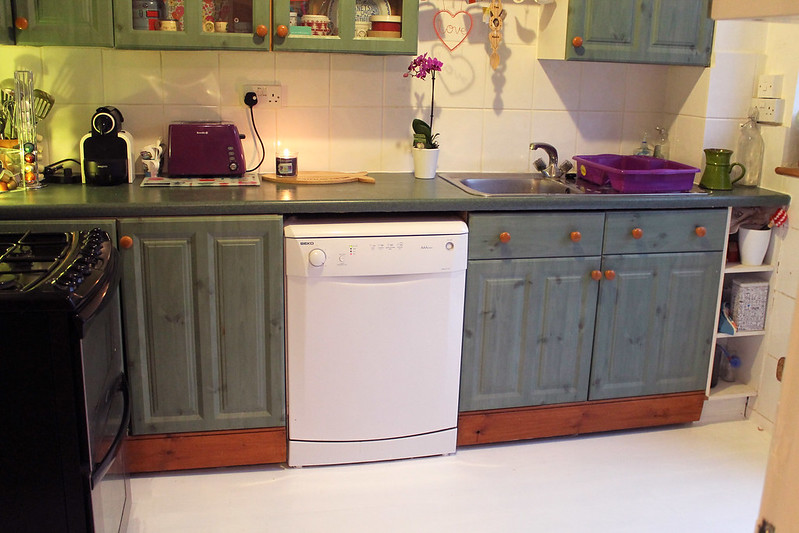 I think it looks lovely, it certainly feels cleaner and more ‘finished’.  If anything I think it looks a bit too perfect, I’ll be quite glad when day to day wear and tear makes it look a little more distressed.

A huge thankyou to Oven Pride for allowing us (I should probably say ‘give us the kick up the bum we needed’) to take on our kitchen project and getting it one step closer to looking like a normal kitchen! My Mum has suggested getting some white knobs for the cupboards and I think we’ll eventually get some new cupboard doors and a work surface from Ikea but as they say – Rome wasn’t built in a day!