I bought this dress before Christmas when Sarah and I went to the Next Afternoon Tea in London.  We made time to pop to a little shop in Soho called 52 Greek Street as we’d heard from Roisin there were some bargainous dresses in there.  I was immediately drawn to this dress, initially because of the Peter Pan collar and the cut but then because of the beautiful fabric.  I’m not exactly sure of who makes the fabric but the print is sort of a mix of some ladies in Spanish dress, some cowgirls, roses and some other brightly coloured loveliness! It’s by a company called Moixa that I haven’t heard of before, it was reduced from £98 to £26 which was a bit of a billy bargain! 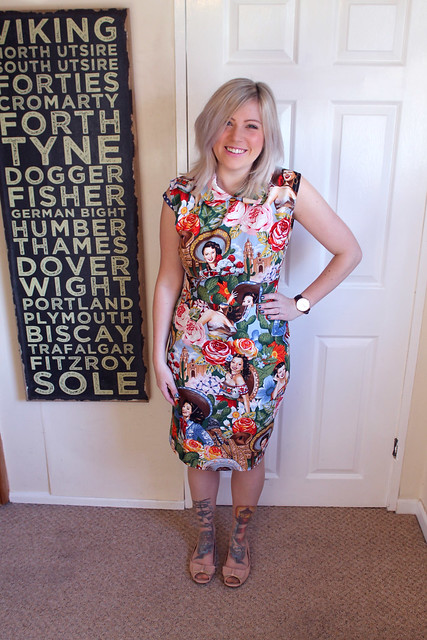 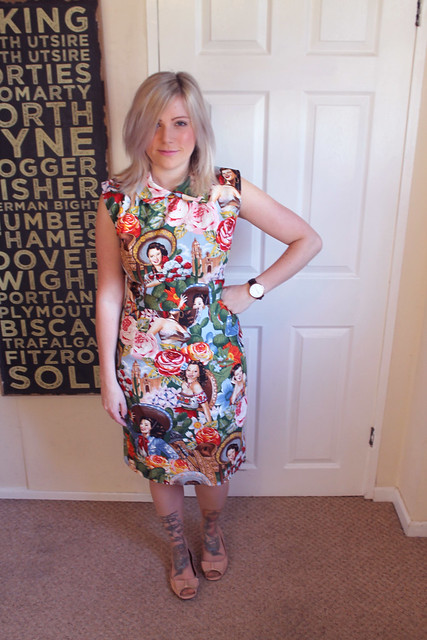 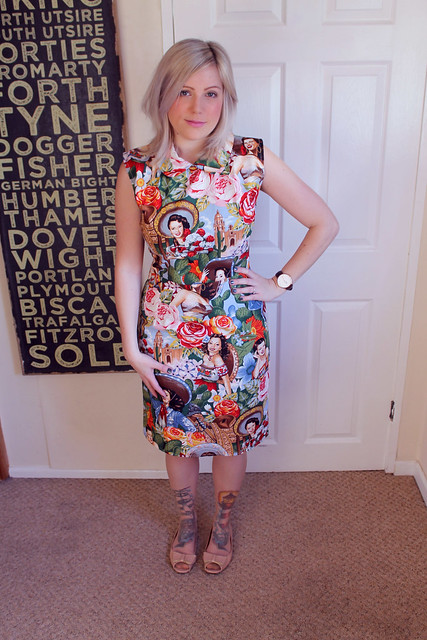 I joked with Sarah when I tried it on that it would be a pre-lunch dress.  You know how a dress fits in the morning and then come the afternoon it feels tight and uncomfortable? I’m not sure this dress would survive the afternoon bloat, nor would it probably fit now I’ve put on a few post-Christmas lbs, but hopefully they’ll be gone soon and I can whip it out of the wardrobe once more.

I’ve made a New Year’s Resolution to only straighten my hair twice a week, rather than the twice a day I was doing before (and subsequently really, horrendously damaging my hair).  This is what it looks like when I blow-dry it, it’s not perfect but it’s definitely better than not being able to ever grow my hair past shoulder-length! So you may see some rather shaggy, unkempt hairstyles from me over the coming months!

I don’t have much news to share today as, truthfully, I’ve really not achieved a lot since Jan 1st! We booked this week off work as we wanted to spend some time at home after being away for Christmas and it has been perfect, and so needed, to just have some relaxing time.  We’ve watched 12 episodes of Orange Is The New Black, made a dent in the Christmas chocolate, been to the cinema to watch Hunger Games/Catching Fire (awesome), I’ve had my nails shellac-ed and… that’s about it! Yesterday I said to Tom I felt terrible that I hadn’t really done anything (I didn’t even get dressed until about 5pm) and he told me that I have to remember that it’s okay to do that sometimes.  I am very hard on myself when I have lazy days when there’s so much to do around the house and I need to learn how to relax a bit more.

I hope you’ve all had lovely, relaxing weekends – after about a week of rain we have a small window of blue sky which is going to last about an hour apparently so I’m off for a walk/jog around the block to get some fresh air.