It feels really good to be sitting down to write about my health and fitness journey so far in 2014. I think I’m going to find it really cathartic and supportive to my goals to be writing about it on a regular basis so I hope you won’t mind me sharing it here.  For those of you not interested in health and fitness please feel free to skip over.

I have been battling against talking about my weight on here and on Twitter because it just seems so dull.  I don’t want to become one of those weight bores who only talks about the numbers on the scales.  I can’t think of anything that defines me less than my body mass, which kind of begs the question as to why I want to tell people what mine is, or update them when the number increases.  In all the time I’ve known Tom, I’ve never known him stand on the scales in our bedroom or look in the mirror poking, prodding, huffing and criticising.  Why can’t I be like the people I know who accept their bodies and don’t give a second thoughts to its measurements? But despite all of my best intentions, I can’t help feeling disheartened when, after a week that was certainly better than the last, the numbers don’t seem to agree.  I can’t deny feeling pretty dejected at seeing that the numbers now mirror what I was at the beginning of 2012, before the Jenny Craig diet, before running, before clean eating, before I felt confident enough to post a tummy photo! Aside from the scales, my clothes are feeling tighter and I feel uncomfortable; bloated, slouchy, self-conscious.  It’s not the direction I want to head in, or the way I want to feel.

I talked in my previous post on health and fitness post about being more ‘mindful’ – listening to what my body wants to eat, when it wants to move, being more understanding of the things that make me feel good and doing them more often.  I realised quite soon after I began attempting this, that this alone would not spur me onto my goals and help me become fitter, more active and more healthy and nourished.  Left to its own devices my body craves McDonalds, Dairy Milk, lie-ins and pizza.  It does not push me, bouncing out of bed to the spin bike or the 30 Day Shred DVD. But why should I be surprised? I commented on Twitter this morning that my brain does not seem to be ‘on my side’.  It tells me I can’t do things, it says mean things about me when I look in the mirror and it tells me to stay in bed in the morning when my alarm goes off for a pre-work run.  The truth is, my brain, or my mind, has gone a bit rogue.  So I can’t trust it to push my in the right direction and I have to take control.  I realise that this might all sound a bit odd, and that talking about my mind like it’s a separate entity is more likely to get me puzzled looks rather than an inner motivation, but it’s made me realise the value of determination and focus.  So my new goal this week is let those negative thoughts pass by, and attend instead to making better habits.  I have been trying that this week; letting the thought of raiding the Christmas chocolates box simply float off into the ether and instead making a fruit-filled smoothie (it is hard but will hopefully get easier). I saw two quotes today that really resonated with me, first, this one…

Going back to the goals I referenced in my first post though, I have some successes to share and some that need further work.  I have only been to one yoga class so far, but I’m signed up to start a course in a couple of weeks and I’ve also been doing a yoga video most mornings, either a couple of Tara Stiles videos, a Yoga for Beginners DVD, or the excellent Yoga for Runners routine that was recommended to me.  I feel really good after doing this and it was amazing for when I was achy post runs last week.

Talking of running, I’ve had a slow re-introduction to it over the last couple of weeks, with two post-work runs with our work running club (we do 5ks on Tuesdays after work) and a rather ambitious 7.5k last Sunday. 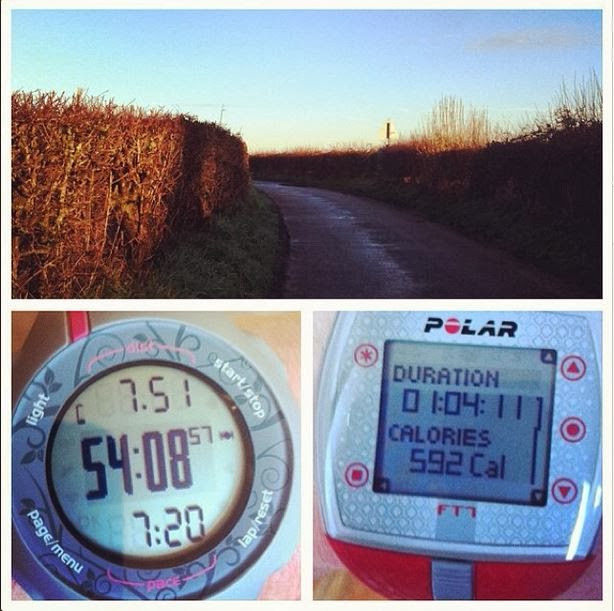 It felt absolutely amazing but I must admit I was sore afterwards, both from my weak ankle and the fact that I’ve barely run for months so throwing myself into 55 minutes of it at once may have been a bit silly (I do have an ankle support and did a lot of stretching but still).

I haven’t done as much dog walking and generally being outside as I would like, though I am blaming that on the weather rather than laziness (it is perhaps a combination of both!)

The dry January has also not gone so well – I made it through the first two weeks but I decided it felt like unnecessary punishment so I’ve had the odd social drink here and there (on three occasions this month).  I don’t feel like a failure because I couldn’t really come up with a reason why I was doing it or how it was helping, so that’s one goal I’ve decided to shelve for now.

How are you getting on if you made any health and fitness resolutions this year? What’s helping you with your goals?