Just before Christmas I decided that I wanted to treat Tom and I to a few days away in January to give us something to look forward to and get us through the post-festive-period depression.  I initially wanted to take us to Iceland to do a Northern Lights tour but as it was intended to be a little bonus Christmas present I thought that £600 (the cheapest I could find for both of us) was pushing the budget too far.  In the end I found a few good deals on Secret Escapes, and after a bit of research, plumped for Kosice in Slovakia.  I’d wanted to visit Slovakia for some time and had heard that it was a relatively cheap place to visit with lots of good food.  The last thing I wanted to do was treat us to a little break where we ended up then having to spend loads of money just to eat and get around (*looks sideways at Copenhagen*) so I thought this sounded like a great deal, especially as the package included a room upgrade, breakfast and a three course meal every night at the hotel and entrance to the hotel spa.  I made a little printout with a photo of the hotel and what was included in the package and put it in Tom’s Christmas card which I gave to him last, at my parents’ house on Boxing Day.  His face was a picture when he opened it as he thought he didn’t have any more presents so it was really nice to see him so excited.

We jetted out on the 15th from London Luton via Wizz Air which was relatively easy and we arrived in Kosice about half five in the evening.  The taxi ride took us through the city and up some dark and winding roads out into the middle of the forest where our hotel was.  It was quite a magical location.  We were given glasses of champagne on arrival and shown to our room, which was wonderful, a huge suite with a window overlooking the forest and curtains that pulled across the windows and over the bed like a canopy.

We went down for our three course meal not long after arriving.  I am a bit of a cheese-aholic and couldn’t help but choose their ‘fried cheese and chips’, which came out like two whole blocks of cheddar encased in breadcrumbs! It was amazing but I must admit I could only finish one (although I saved a bit of room for cheesecake for dessert!)

The next day we went into the city to explore.  I love the excitement of exploring an unknown city; ambling up alleyways not knowing what’s at the end, reading maps, following your noses to find a lunch-spot… We made like proper tourists and went into the tourist information for a map and a guide as to what to see.  It’s a really interesting city, with industrial style buildings interspersed with beautiful architecture, churches and palaces.

I have always really enjoyed ‘interesting’ looking buildings – graffiti, peeling paint, interesting posters and advertisements, textures and colours.  I put my photos up on Facebook and someone commented that Kosice looked like a bit of a ‘hole’ but I promise it’s not! There are lots of beautiful buildings and tourist spots, I’ve just always preferred capturing slightly different things than your typical postcard/chocolate box type shots. 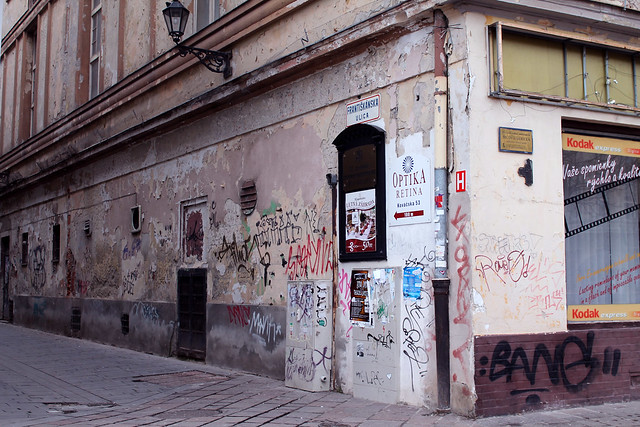 The main street (Hlavá) had lots of beautiful buildings in different colours and shapes and sizes.  The tram lines run down the middle of the street. 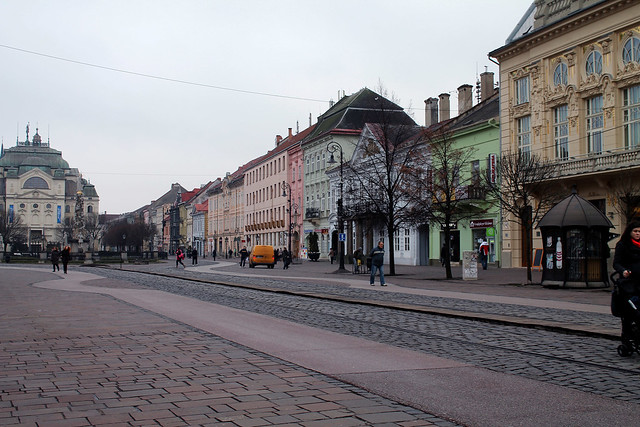 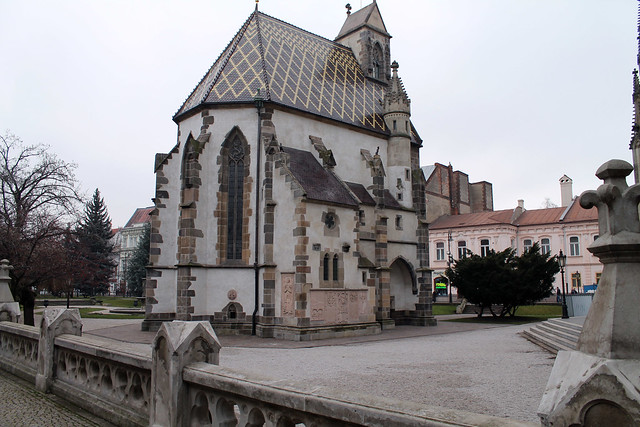 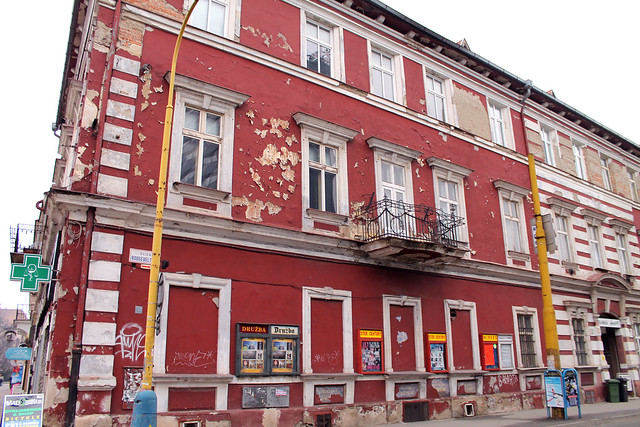 Kosice was named the 2013 European city of culture and a lot of effort has been spent in promoting art and culture in the city, with some interesting murals and art installations. 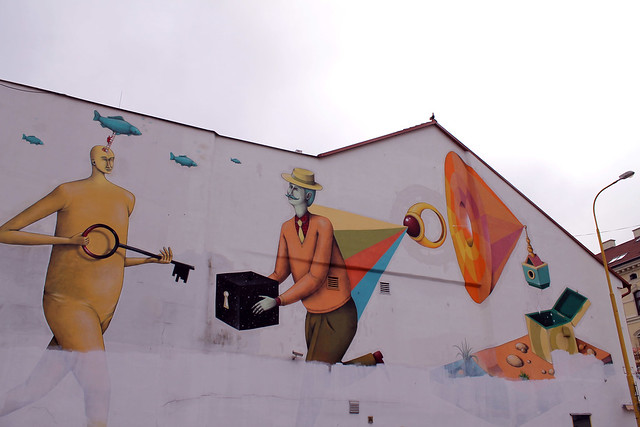 We visited the ‘Kunsthalle’, previously an indoor pool but has now been transformed into an exhibition centre.  When we visited there was an exhibition of British art in there on loan from the British Arts Council, which was interesting to look around (with some slightly odd ‘modern art’ videos that Tom and I couldn’t really understand the meaning of!) 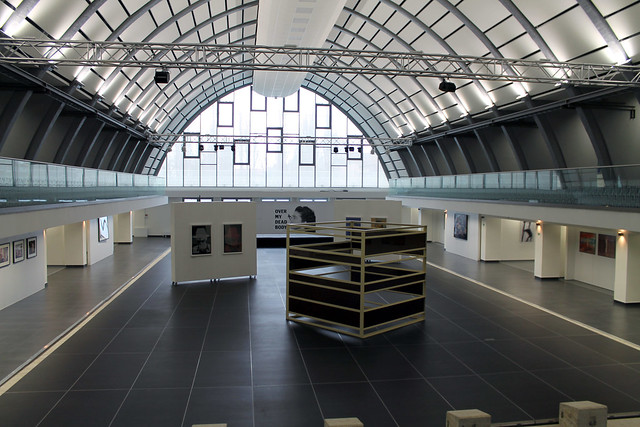 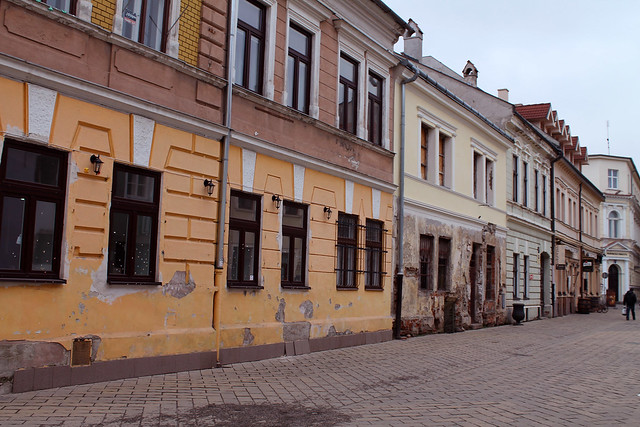 After lots of exploring it was time for lunch.  After trying a few restaurants that we’d seen in the tourist guide and finding them to be closed (January seemed to be out of season with a lot of restaurants and shops looking closed or empty), we followed our noses to a pizza restaurant up a deserted alleyway.  We then followed them down some stairs and through some doors to a strange restaurant with pumping dance music and CSI on the TVs.  We managed to do enough broken Slovak and gesturing to get an English translated menu and we both ordered pizzas… which, when they arrived were huge.  I think the photos belie quite how huge these pizzas were.  Mine had proscuitto ham, olives, onion, mountains of cheese, cherry tomatoes and blue cheese on it.  I honestly think it’s the best thing I’ve ever eaten. 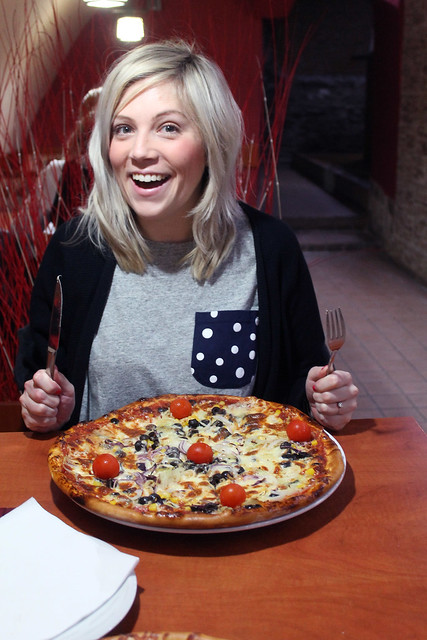 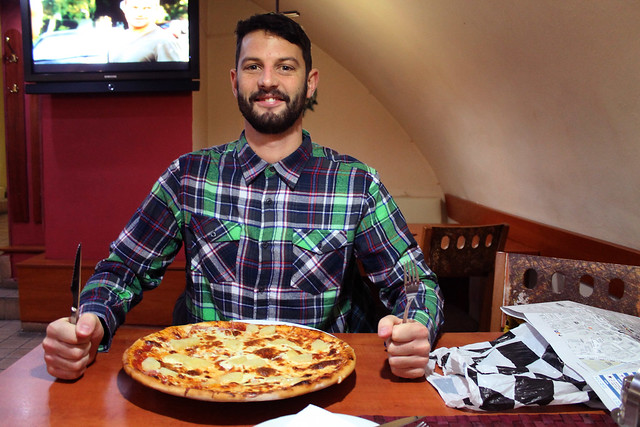 I had two glasses of wine and Tom had two beers (tall beers in giant glasses I might add!)  The bill came to €17, about £15.  With full bellies we then did a little more exploring before heading back to the hotel.  This was the view from our hotel window as we had a little post-pizza snooze and read our books. 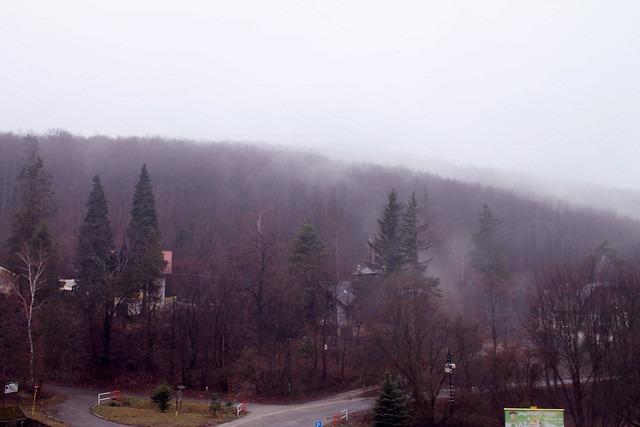 We went down to dinner about 7pm, having booked our complimentary massages for 7.45.  After the giant pizza, another two-courses and a glass of wine however we decided to cancel the massages as, after eating more food than I usually eat in two or three days, being pummeled within an inch of my life did not sound appealing.

The next day we went back into the city to visit the things we’d missed the day before.  We went into the cathedral, which was beautiful. 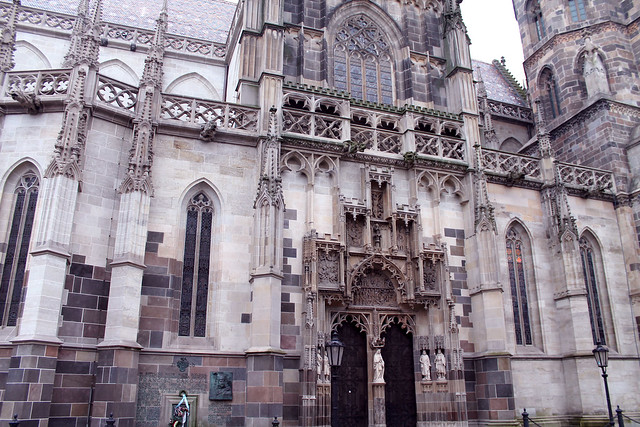 And I took some more photos of interesting doorways and buildings… 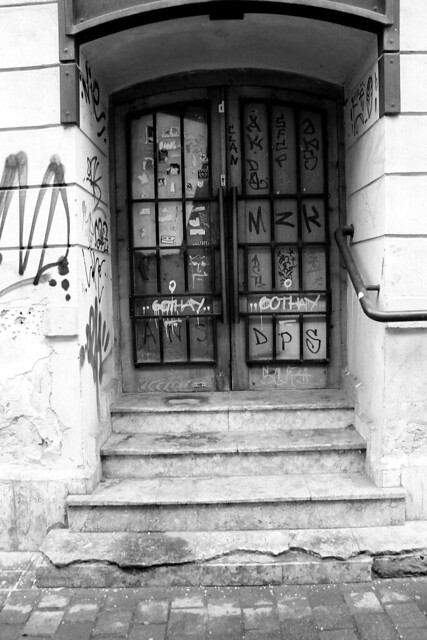 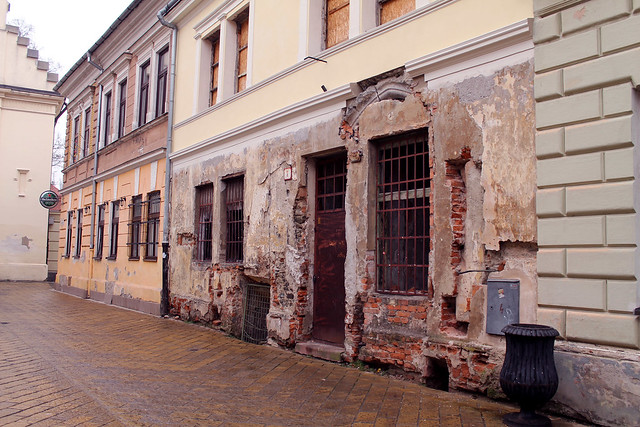 It was so cold that we decided to make a trip into Aida, a patisserie on the main street, to warm up mid-morning.  I gave Tom a €10 note to get us tea, coffee and pastries and it was €3! I had a delicious green tea and a miscellanous slice of cream, custard and chocolate that was utterly delicious (and probably about 90p!) 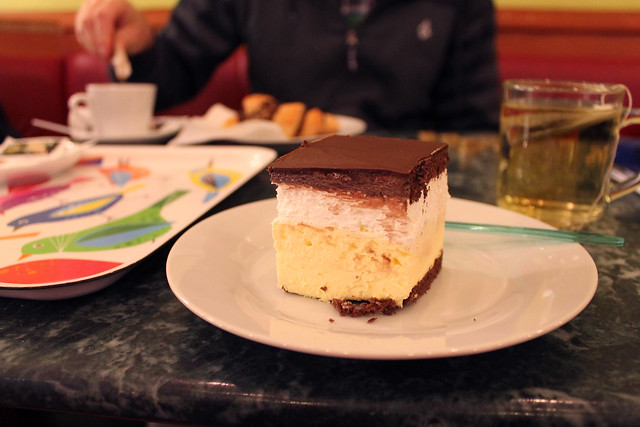 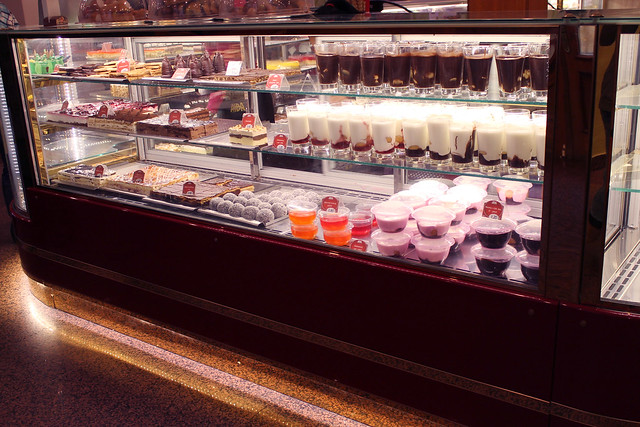 We then went to Miklus Prison, a tour of the executioner’s house and the prison in Kosice that was in use until the early 20th Century.  We were the only ones in there (even the ticket office was offsite) so exploring the dungeons, torture chambers and executioner’s house was a little creepy! 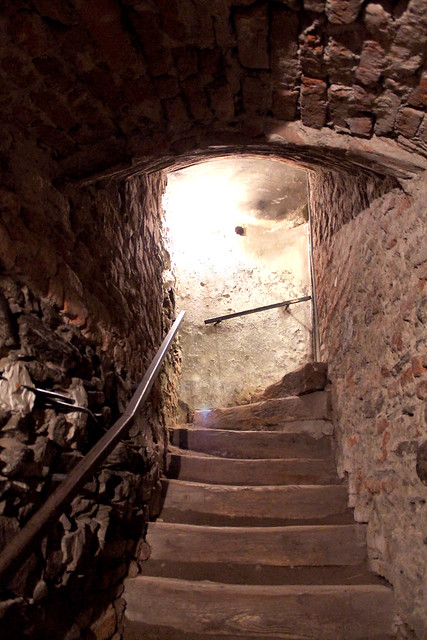 After that we went into a nearby restaurant for lunch.  I had a traditional Slovakian meal – Bryndzové Halusky, which is potato dumplings (a little like gnocchi) in a sheep’s cheese sauce with crispy bacon.  It was amazing, but very filling!

After more of an explore we headed back to the airports to get our flights.  I think I returned about a stone heavier after all of the food that we ate but it was very worth it! I would massively recommend a trip to Slovakia for anyone looking for a mini-break, Wizz Air fly there from London Luton from €29.99 so you can get package deals relatively cheaply.  I’m hoping that although we’re saving for the wedding that we’ll be able to do a bit more travelling this year, we’re hoping to be able to book a little USA trip for September so I’m sure I’ll be excitedly sharing any developments in that area over the next few days!

Have you been to Slovakia or other countries in Eastern Europe? Where else would you recommend visiting? I’ve bought a Lonely Planet ‘Europe on a Shoestring‘ book and I can’t wait to tick some more countries off the list!