Not long after we moved into our house I set up a ‘craft room’ in a room downstairs that was converted from the garage some years before.  I put in a desk for my computer and sewing machine and bought a set of drawers to store all of my fabrics.  I bought a lot of fabric, felt, threads and put a beautiful sewing box on my Christmas list.  I bought crafty books and subscribed to Mollie Makes, flicking through all of the ‘makes’ with excitement and bookmarking future projects.  My enthusiasm for craft was unrelenting – I pictured myself spending lazy Sunday afternoons making dresses, pins in my mouth, a black and white film on TV and endless mugs of tea to fuel the gentle putter of the sewing machine.

My first foray into sewing at home was cushion covers.  I made a few cushion covers for our house, I made cushions as presents to give to other people.  I pretty much nailed cushions.  I then moved onto hanging hearts.  I made a mess of hanging hearts.  There were wonky hearts, misshapen hearts, stuffing coming out of hearts.  I tried other things – other projects from my Mollie Makes and Cath Kidston books.  I messed them up.  I excelled in unthreading the needle, getting the thread jammed, taking an hour to wind the bobbin and generally producing things that looked that they’d been made by primary school children.  I remember a time in Primary School, actually, where I undertook a sewing project where I had to appliqué a character onto a bit of fabric.  After an hour of sewing I discovered I had sewed the entire thing onto the fabric, but also onto my school skirt.  I probably should have known at that stage what my relationshup with sewing would be in later years, but unfortunately I did not take the hint.  I did eventually take the hint with my own endeavours a few months ago, after several stressful Sunday afternoons throwing tantrums at my disfigured creations. Mollie Makes, but Rosie Ruins.  I accepted that I was not a crafter.  I packed away the sewing machine. 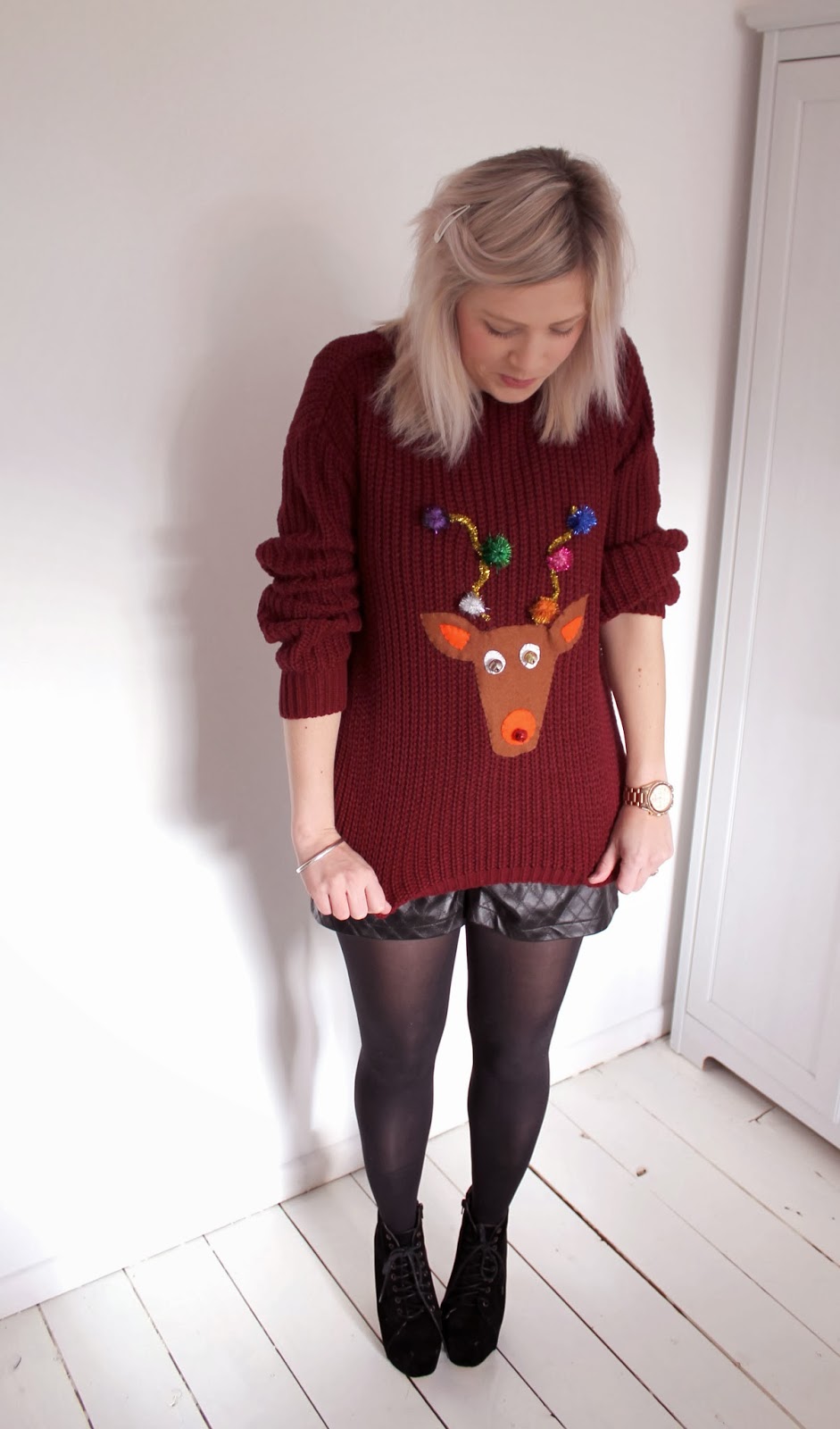 In my defence there was a tighter deadline than I thought to knock this up, meaning I had to do it in one afternoon (with a bit of help from my Mum and Dad).  Also in my defence, my Christmas jumper:

1. is musical, in the sense that it has bells sewn onto it
2. features a slightly drunk looking Rudolph with glitter baubles on his antlers.

What’s not to like? Well perhaps quite a lot, as now the album has gone live on the Missguided Facebook page my creation is currently well and truly last at about 70 likes, with some of the others on over 1000.  And most of them at least on a few hundred.  I had to laugh into my cup of tea last night when I saw it, some of the other jumpers are absolutely amazing and totally deserve to win. 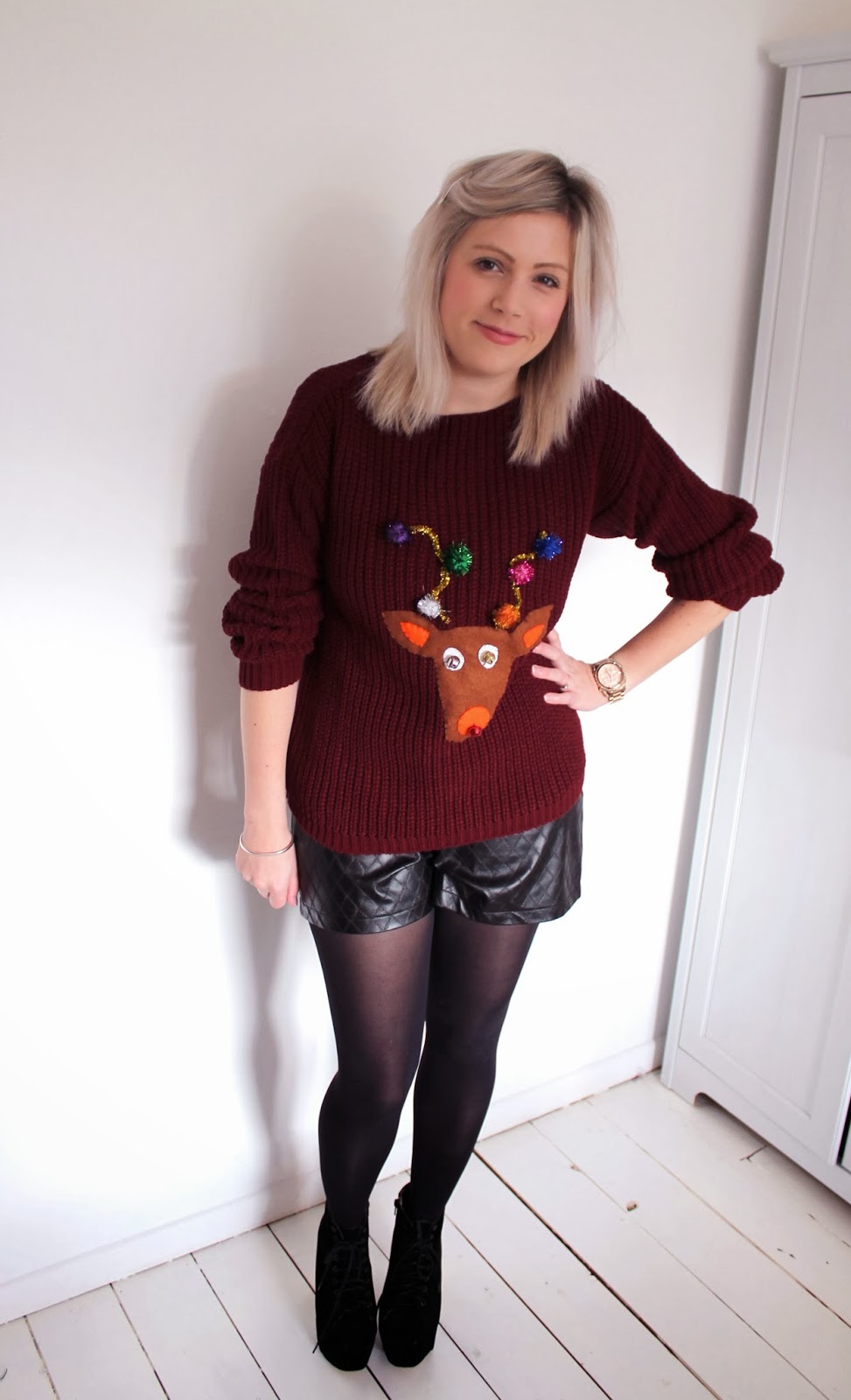 If you like an underdog, why not go and give drunken Rudoph a vote here, and whilst you’re at it, view the whole set.  If you ‘like’ your favourite you could win a £75 Missguided voucher so there is something in it for you rather than simply nursing my bruised ego at being so far behind!

Are you a naturally crafty person or are you a messy, botcher like me?