When I was asked if I’d like to review the Acer Iconia A1 tablet I was pretty excited, not only because I get to review a tablet (which is awesome in itself) but because it’s one I haven’t heard of before and so I was eager to find out more about it, and have a good play.  I already have an iPad Mini that I absolutely love, so I was keen to find out how a tablet that retails at £100 less, would shape up.

At £150, the A1 is clearly aimed at the budget tablet market, and competes against tablets like the Kindle Fire HD (which greedy guts here also owns as I got one for Christmas last year) and the slightly more expensive Google Nexus 7.

The Acer tablet runs on Android and has a 16gb memory, 5MP rear camera and 0.3 MP front camera, and another interesting feature, GPS.  It also has a Micro SD card slot which would be a really useful feature if you wanted to increase the memory capacity. 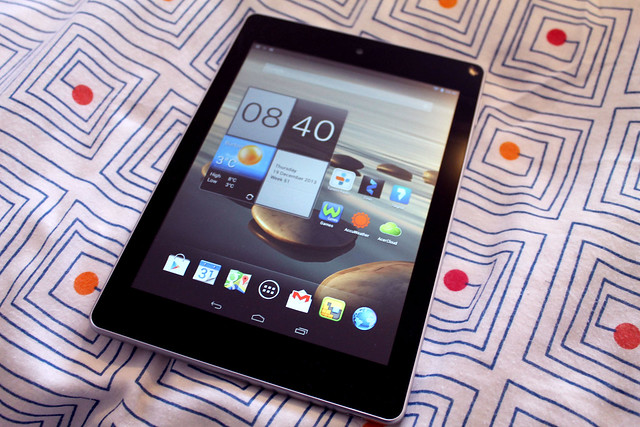 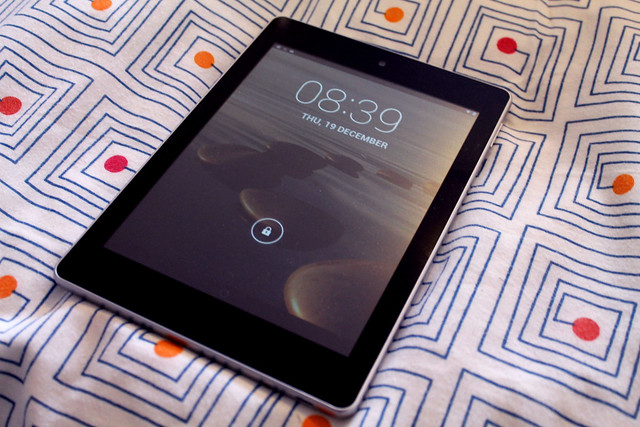 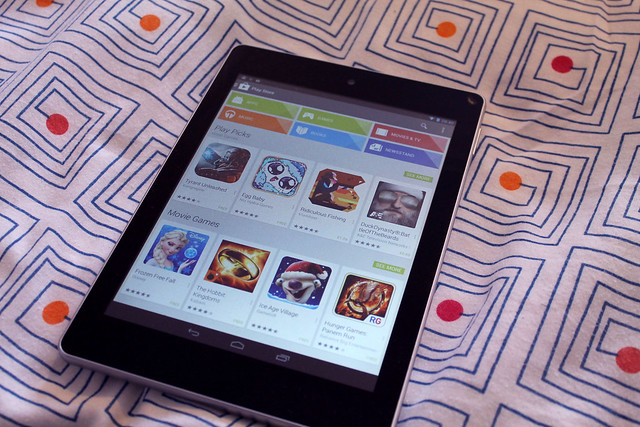 One of the things I really liked about the tablet is that it has close links with Google, using the Chrome browser, allowing you to log into your Google account and using the Google Play app store.  As someone who uses Chrome extensively as well as the Blogger platform and Google+ I found this really useful and I was able to import all of my bookmarks in seconds.  I’ve downloaded the Blogger app which is going to be brilliant for blogging on the go – even when there’s no wifi available being able to spend long train journeys drafting blog posts will be great.  I’ve also installed the Bloglovin app so I can keep up with my blog reading. Another thing I liked about the app setup when I initially started using it is that it comes with very few pre-installed apps, so you get a nice, clean, home screen.

The screen is nice and big (7.9″), with a 1024×768 resolution that looks sharp and clear.  There’s also an HDMI port which I think is a really useful feature (and one the iPad Mini doesn’t have) as it means you can output the tablet to a bigger screen. It’s fast and responsive and a genuine pleasure to use – no issues with ease of use, display or features for me.

One of the only obvious areas where the iPad Mini really trumps the Acer tablet is on weight and width – the A1 is chunkier and heavier, though not hugely so.  This could be an advantage if you have young children or are looking for something a bit more durable.

Overall, it feels like a great tablet for the price and I really enjoyed using it.  Although I wouldn’t choose it over my iPad Mini I’d have no hesitation in recommending it as a sub-£200 tablet.  If you are considering buying it, as with any electronics/hardware purchase it’s always a good idea to check out the other Acer Iconia A1 reviews and find out whether it’s the one for you, but I definitely really enjoyed using it.

Do you have a tablet? What do you use it for? I must admit I don’t use my tablets as much as I thought I would and tend to rely on my phone for browsing and Googling, however I’ll definitely be packing one when I go away for Christmas as it’ll be a really good way of keeping on top of my emails and Bloglovin reads!

{I was sent the tablet for review, views are all my own}