It’s funny how a spur of the moment decision can have such a major impact on your life.  At the end of July last year I had a day off work at home, which meant that I was on dog-walking duty.  As usual, I wasted away the morning mooching around the internet and came across some fitspo sites.  I was faced with the sort of graphics you see every day on Tumblr and those types of blogs – “suck it up now or suck it in later”, “success trains, failure complains”, “yesterday you said tomorrow” and so on.  It suddenly occured to me that that day could be the day I kickstarted a positive change in my life, and so instead of walking Bodhi around the field I let him off his lead and ran a few laps of it whilst he bounced along beside me.  It felt amazing. From then on, I decided, I was a runner.  The only person who could stop me from being a runner was me, and ‘me’ wasn’t going to do that anymore.  I tried the Couch to 5k programme but found it a bit restrictive (some days I found I could do more and I wanted to push myself) so I started using the Nike Running App, getting up before work and running as far as I could.  I started off little, a mile and a half, sometimes even less, and just kept pushing until I could do more.  I remember the elation I felt when one day I could run and talk, and run for a kilometre, and then a mile, without stopping.  There is a moment when it just ‘all works’ and it feels so amazing.

In November last year I set out to try and run as far as I could, and I ran seven miles/11.4 km in 1 hour 23 minutes.  I then had to have a break for a couple of months as running in below freezing temperatures was painful on my chest, but I picked it up again in March and loved it every bit as much as I had done when I’d started.  (I’ve also now been diagnosed with sports-induced asthma and have an inhaler which should help with running in the cold this year).  I found myself able to run 5ks in the mornings before work and tried (and still do) to run several times a week.

My biggest acheivement since I started has been running the five mile National Lottery Run around Olympic Park and into the stadium.  It’s something I never would have dreamed of last year.  I hated running in school and would sit in the bushes gossiping with friends when it came to cross-country running time (emerging a little while later for the final lap).  I didn’t really do any sports from leaving school until I started running (12 years of barely any exercise!) but getting into running has given me an appetite for all kinds of fitness and I now try and go to the gym a couple of times a week too. 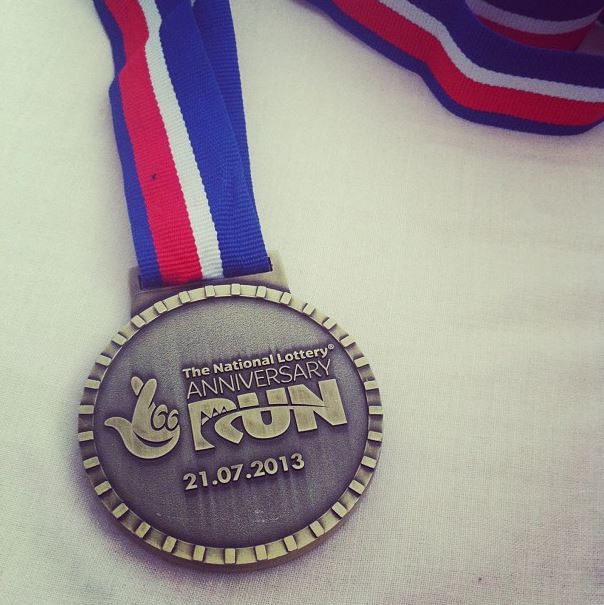 On Sunday I went running in the forest and managed 8.5 miles (about 13km) and loved every second of it (apart from the bit where Tom screamed at me as I was about to get bitten by an adder).  I try and do Park Runs on Saturdays so I can get another record of my time, plus I enjoy organised runs.  I’m not a fast runner – I haven’t managed a sub-30 minute 5K or a sub-hour 10k but I do it because I love it, I’m not in competition with anyone.

I ran for a few weeks when I started without using any tracking, and there’s been other runs I haven’t tracked, but since I started, my combined Nike App total and the Garmin watch I now use is 190 miles. That’s the equivalent of me running to Nottingham! I congratulate myself for every run, no matter how small. I’m fighting against 12 years of not doing any exercise and it’s almost always a hard slog but it’s worth it. I find myself uttering phrases that weren’t even in my lexicon this time last year – “I’m running home from work today”, “Where’s my heart rate monitor?”, “My next target is to run 10 miles.”  I have moments of sheer joy when I run, sometimes it almost feels like an out of body experience when it’s a particularly tough one (I had a moment like this running up a hill in the New Forest on Sunday!) – the moment when you realise you’re using your body for what it was designed to do – legs moving in front of one another, the road or track in front and behind, propulsion derived from you and you alone.  It’s an indescribable feeling.

For anyone who fancies running, or getting active, and thinks it’s not in their nature, I promise you can make it happen.  Last year I had barely exercised for 12 years and now I’ve basically run to Nottingham.  So there you go.