As well as all of the awesomeness that’s gone on around my birthday, August has been a pretty good month so far.  I’ve posted about my birthday celebrations but I thought I’d also share a couple of other bits and bobs that have happened over the last couple of weeks (how did the ‘it being mid-August’ – or past it even – thing happen?)

The first thing is that I’ve gone a bit ‘framing’ crazy – I bought some frames from Sainsbury’s and also shipped a whole load of prints off to our local printers so our house is becoming a lot more filled with art and prints, which really makes me smile. 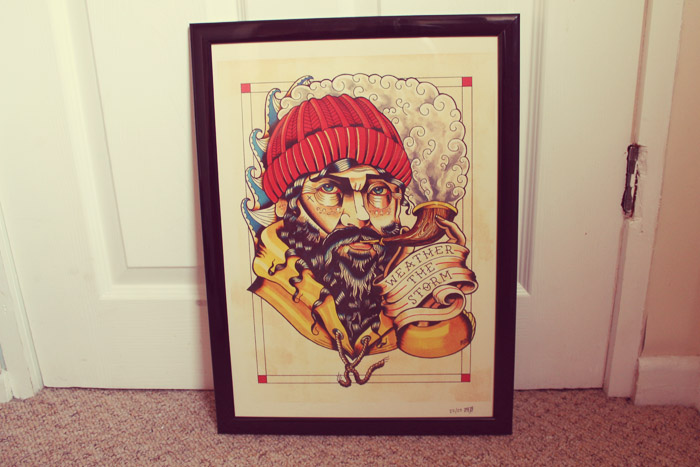 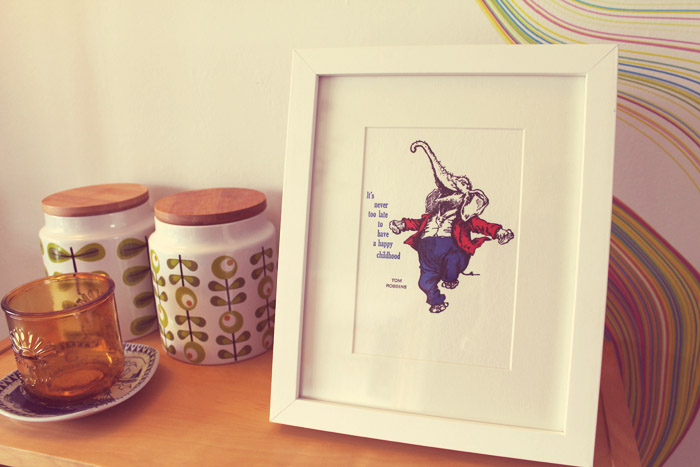 Since we renovated the conservatory we’ve been able to open the curtains at the back of the lounge, which brings loads more light in.  I love standing in the hall and being able to look right through the house onto the garden.  (Although, ooohh, that wonky fox cushion is making me a bit twitchy!) 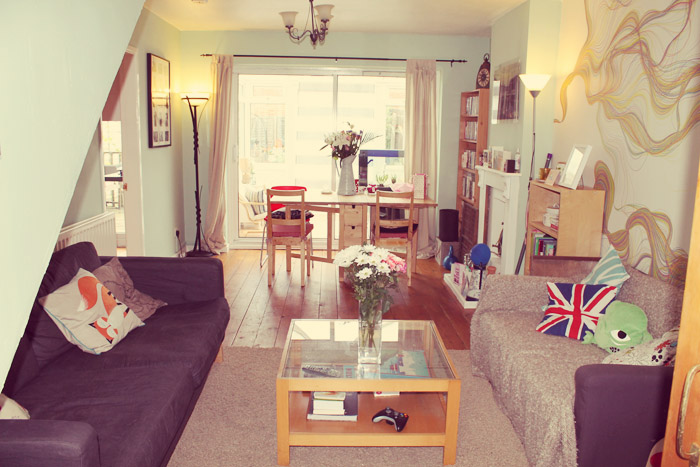 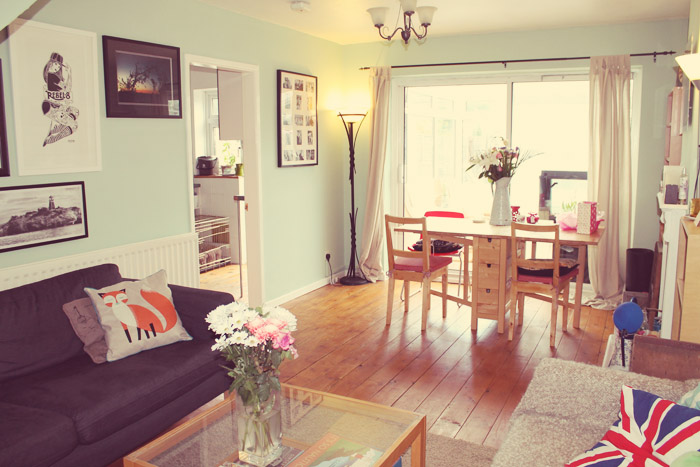 Ah, that’s better! Good one fox! On the day before my birthday, my awesome friend Kate planned a little tea party on the grass outside work. She made homemade scones and brought jam and clotted cream.  Tom got told off for putting cream on his scone first (not the Cornish way, and I’m from Cornwall! Tut tut!) We even brought our mugs of tea out onto the grass for a proper afternoon tea! (I was wearing heels and sloshed half of mine out of the mug on the way over – oops!) 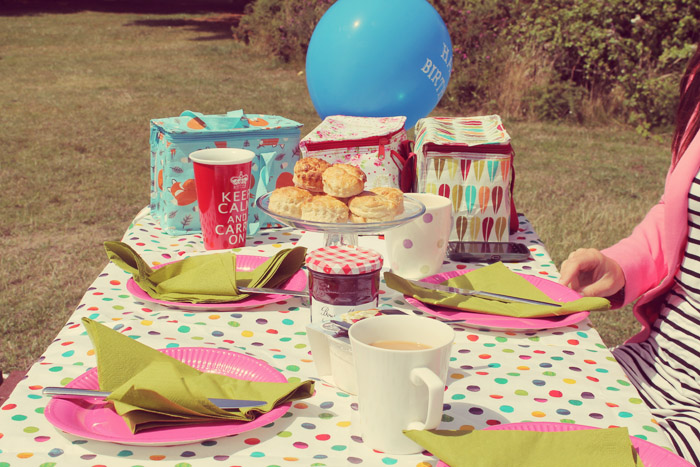 We held our own little cake-based soirée at ours last Saturday, we were going over to a barbecue at a friends’ house and invited them round to ours first for some cakes and an aperitif. We had Kir Bretons and some cakes from Waitrose – I was going to bake but ran out of time so Waitrose came a close second… 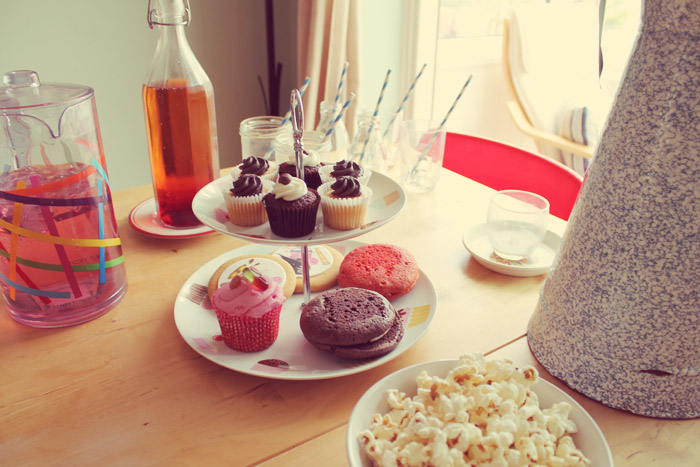 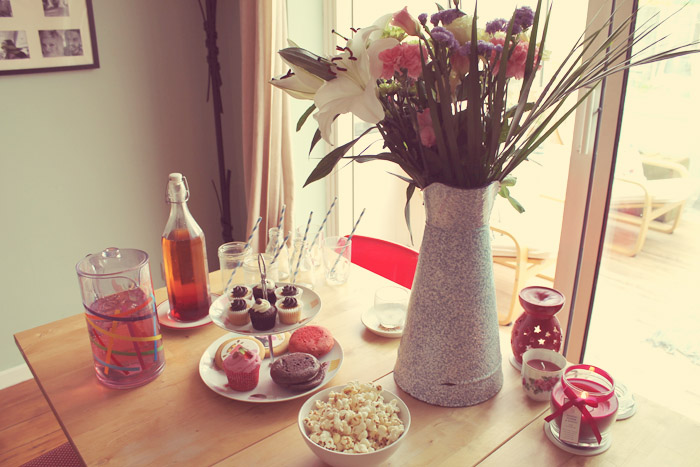 Those flowers were a birthday gift, aren’t they beautiful? Having fresh flowers in the house is making me a happy Rosie at the moment.  As does burning fruity candles – that one glowing away right there is a Passion Flower and Mango one from Sainsbury’s.  Flowers and fruity candles are my cursory nod towards it still being summer, even though now my birthday’s gone I’m dreaming of filling the house with holly and conkers and burning Christmas candles! Since moving to the New Forest I think Autumn has replaced Summer as my favourite month and I must admit I am yearning for Sunday Roasts in country pubs, mulled cider and tramping around the forest in welly boots.  Sorry Summer!

Saying that, I was glad for some sunshine on Thursday night as we went to Lulworth Castle to watch Top Gun in the evening, which would have been horrid in the kind of weather that’s plagued us since then (no thanks constant rain!) 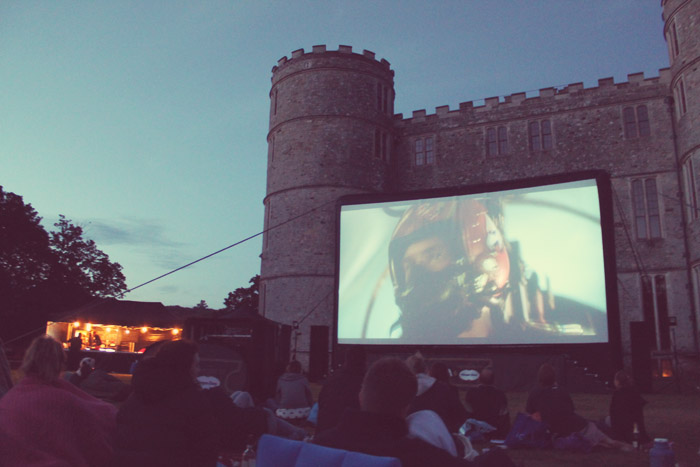 We had dinner before we went but still brought a little coolbag with some rosé wine and blackberry spritzer (yum!), crisps and chocolate.  We bumped into some of Tom’s friends and laid out on a rug, watching the sun set over the castle and enjoying a bit of classic 80’s film action!

This weekend has been quite a lazy one so far, though yesterday I ran my first Park Run which was an interesting experience! I came 38th out of 48 so I wasn’t completely rubbish but I still felt a little embarrassed as I ran most of the last lap on my own! I still felt a little rubbish after being poorly this week so I don’t think I was exactly on top form, I didn’t feel quite right afterwards either.  In fact, I desperately needed a bit of sugar, so, ummm… this might have happened… 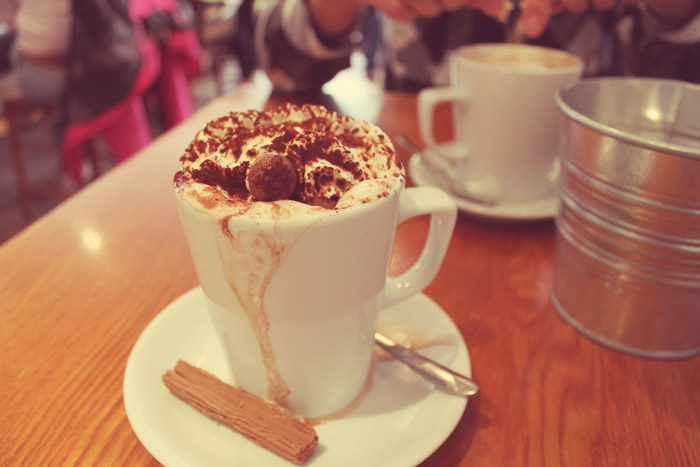 At least someone has been benefitting from my early rises to go running though, Bodhi is definitely a fan of hopping right into the warm spot! 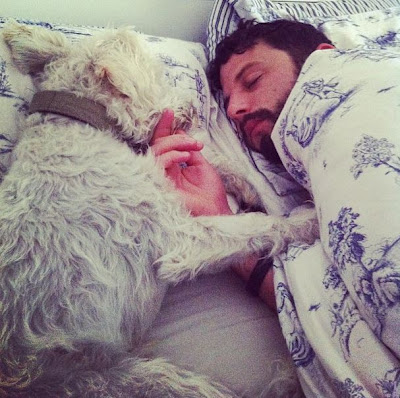 Hope you’re having a lovely August so far! Are you still clinging onto summer or are you longing for Autumn like me?