As I’ve mentioned in pretty much every blog post since I booked the holiday about a month ago, last week I went to Rhodes in Greece for an all-inclusive week away with Tom.  We flew out from Bournemouth, which was so convenient as we live about ten minutes from the airport.  As we flew over Rhodes I was pretty surprised to see all of the beaches and hotel pools deserted; then the Captain announced that it was really cloudy and the lack of sunbathers made sense.  When we arrived there was barely any sun to be seen which is really out of sorts for Rhodes, I’ve been a few times before and seen nothing but perfect blue skies! Here is our deserted pool from our balcony…. 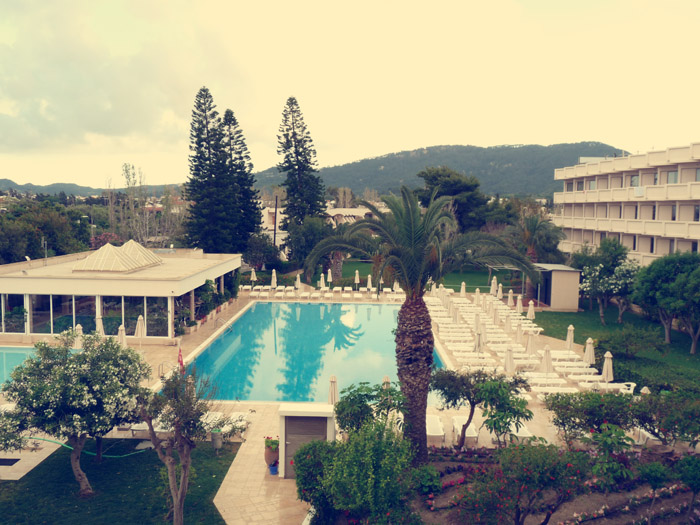 The next day brought more cloudiness too but we did lots of reading, drinking cocktails, eating, playing cards and lolling around the room to make up for it.  The next day we visited Rhodes Town which was a lovely day out.  The Old Town area is a World Heritage Site and contains 200 roads and lanes with markets, shops and restaurants contained within medieval walls. 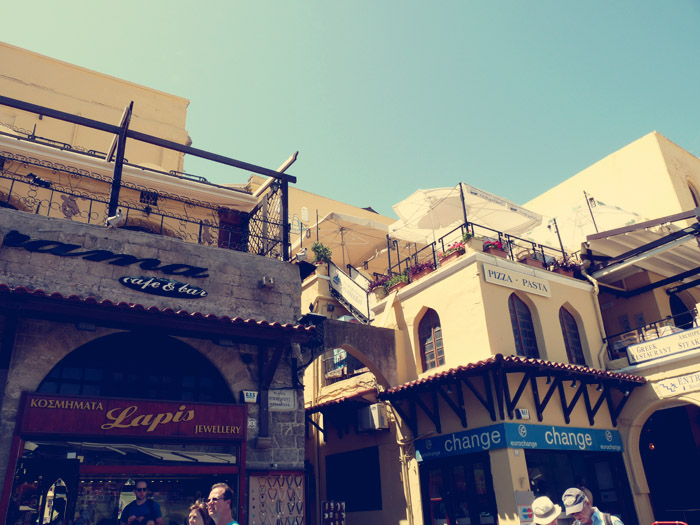 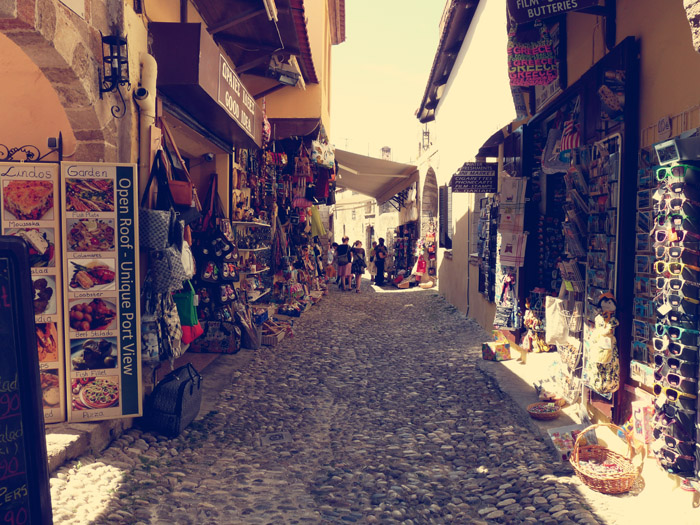 We had lunch in the Old Town and just generally enjoyed walking around the cobbled streets in the sunshine, taking in the sights and sounds – market stall owners encouraging you towards their wares, the smell of Greek food everywhere – souvlaki grilled on skewers and gyros roasting on spits, people on scooters hurtling through the narrow lanes, people enjoying cold beers on terraces high above the markets and the occasional stray cat winding under restaurant tables searching for some abandoned scraps or a generous visitor.

The next couple of days were filled with sunshine and so we sunbathed by the pool and went for strolls along the beach.  Tom took an afternoon out to go windsurfing… 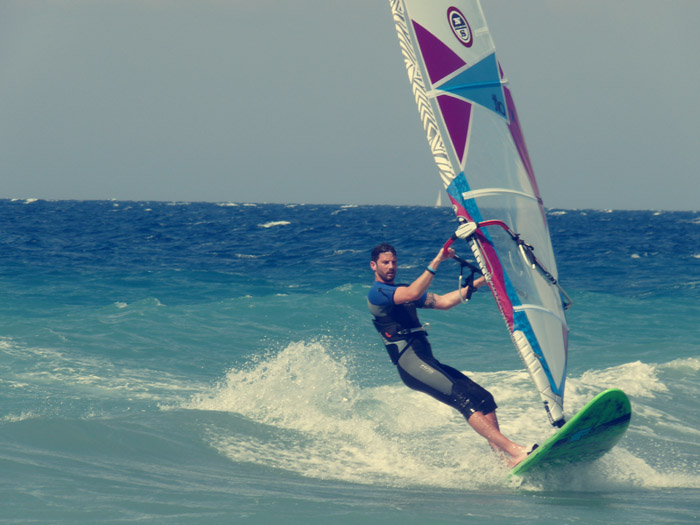 After our flurry of sunshine the clouds came back, and this time they brought rain.  As if rain wasn’t bad enough, on the Monday there were some thunderstorms during the day.  Nothing prepared us for the thunder and lightning that came at night however. In the middle of the night fork lightning rippled across the sky and a storm like I’ve never seen or heard happened right above the hotel. The thunder was like deep, deafening rumbles or loud gunshots and it left the electricity shorting and the lights in the hallway outside our room flickering, dogs barking and the fire alarm in the adjacent hotel going off.  (Tom slept through it). 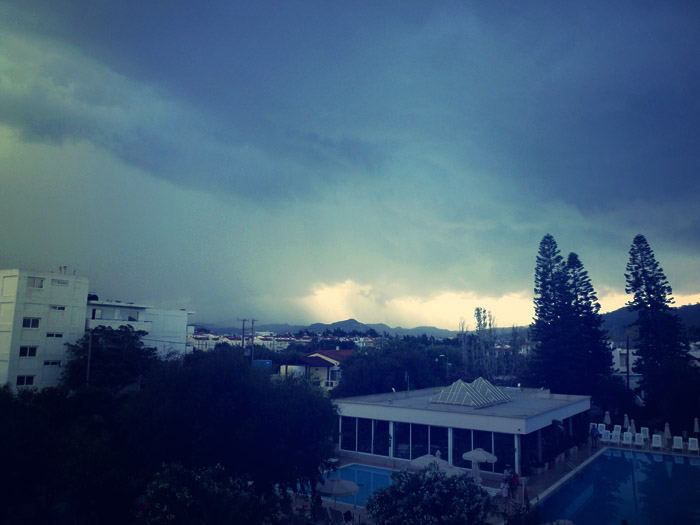 We finally had some more sun on our final day (Tuesday).  We did more lolling by the pool and went out for a lovely dinner in the evening.  Tom had two pints of local beer in a giant glass and I had an ice-cream cocktail with Kahlua, strawberries and vanilla and chocolate ice cream.  It was phenomenal! 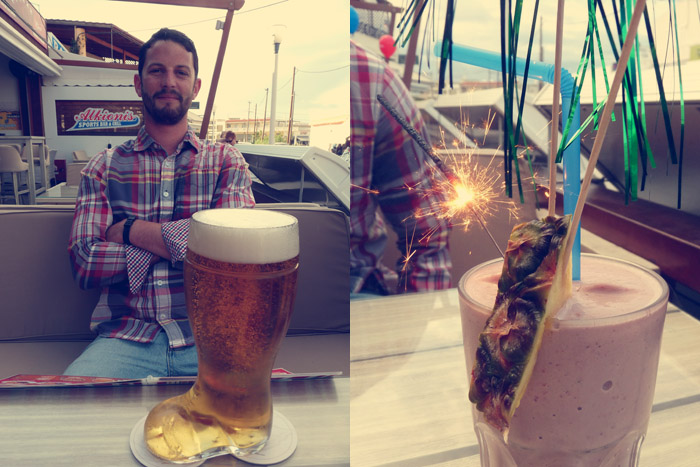 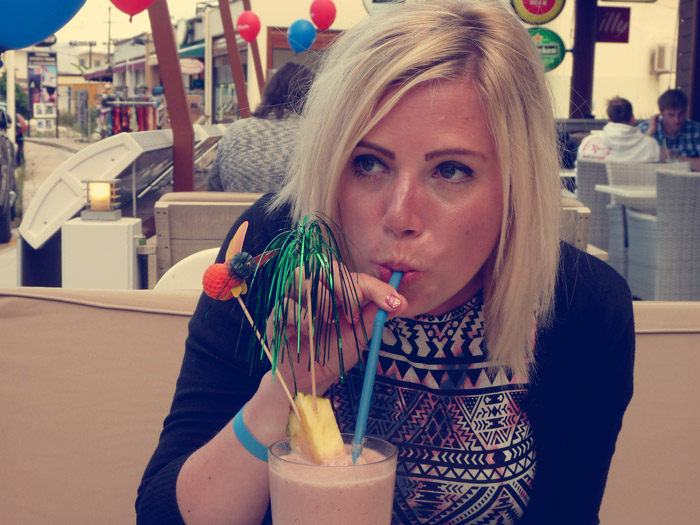 On the way back from dinner we watched the sun set on the beach and waved goodbye to our final day in Rhodes.  Despite the weather being not what we’d hoped we still had an amazing, relaxing time – just what the Doctor ordered! 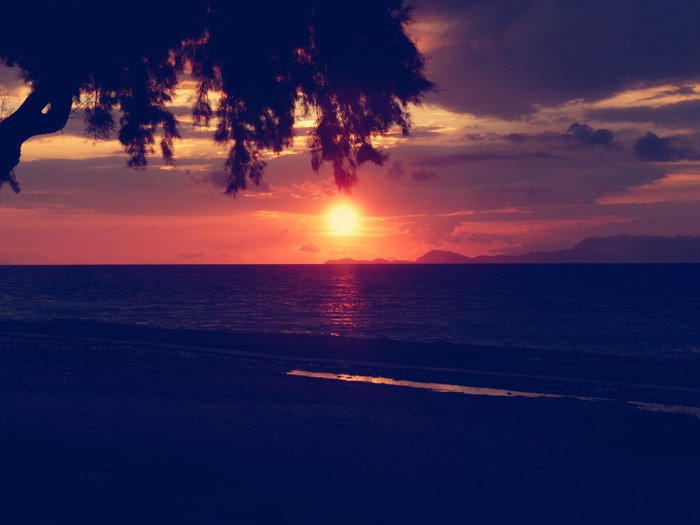 I downloaded some films to my Kindle Fire HD before we left and before bedtime we curled up in bed and watched them (amidst arguments about who had to hold the Kindle).

Let me know if you fancy any film or book reviews of the above and I can certainly fit a couple in!

On a side note, thanks to those who left kind comments on my last post.  The blogosphere is a rad place to have a little home.