Like them or loathe them and whether you’ve been approached to do them or just seen them on other blogs, sponsored posts have become a part of blogging life.  Once you’ve built a corner of the interweb that people come to because they consider you an expert or someone they want to listen to, you’ve built a corner of the internet that companies, PRs and Agencies start seeing as real estate.  But this might be a thing of the past due to Google’s latest clampdown on paid links.  If you’ve ever taken payment for a post or a link, or even a product or a freebie – or thought you might do in future – then I hope you’ll find this worthy of a read.  Unfortunately it’s no longer an option for bloggers to follow the lead of PRs and not educate themselves on the rules of Google and advertising, and Google’s action against people who pay for and host these links signals a sea change in the way we monetise our blogs and build relationships with companies.  However, before I explain, let’s take a step back however and consider how this all started.

Why do companies ask for sponsored posts?

The way Google ranks pages in its search is somewhat a dark art, but what we do know about Google is it lists pages predominantly on the kudos it gives to them based on what I’d describe as ‘word of mouth’.  In order to decide how relevant a page is for what you’re searching for, it goes on recommendations.  So if you’re searching for ‘hairdressers in Bournemouth’ it does the equivalent of talking to ten of your friends and asking them who the best ones are.  It also does some other things, like, if one of your friends is an expert in haircare or beauty, it gives a bit more weight to their recommendation.  (This is a very rudimentary explanation but it will do for now).  The way Google does this is it does things like sees how many people link to a hair salon, and how many people link to it via the text you’ve searched for, for example if I own a haircare blog and I write ‘Bob’s Salon is the best hairdressers in Bournemouth‘ and link to the website of Bob’s Salon, boom, when someone searches for that text in Google, that’s a few points given to Bob’s Salon that will bump him up the ranking.

Naturally, all companies want to be number one in Google as it’s the first thing you click on.  So after a little while, companies started to cotton on to this ‘word of mouth’ premise and paid links were invented.  That’s why we get emails from companies asking you to link to them (bump them up Google) or link to them via a search text (bump them up Google based on what most people search for) – because as bloggers we are seen as experts in particular areas, and because if we have a good amount of traffic, this means more clicks and more points.

Why isn’t this okay?

Because Google is a happy, fluffy company that wants to give you results based on honest, genuine information, it does not like this practice at all.  In fact, it makes Google very, very grumpy.  Other people whom it makes grumpy are the Advertising Standards Authority, and the Office of Fair Trading.  These organisations obviously regulate advertising (which a paid link is) and protect consumers.  I’ll explain – say you’ve asked your friend which hairdressers you should go to in Bournemouth and they say Bob’s Salon.  But what they don’t tell you is that they’re working on commission and they just pocketed £10 for sending you Bob’s way.  If you find out you’d be pretty narked right? Bob isn’t the best hairdresser and might make a right meal out of your hair, but they recommended him to you on the basis they were getting paid, and didn’t tell you that.  That’s what a paid link is doing (unless you do certain things which I’ll come on to next).

So what should I do?

ASA and OFT are happy if you disclose that you’ve been paid or received a product in exchange for a link or a blog post. What they expect is that you add a disclaimer to indicate this, be it a piece of text at the end of a post, a graphic or whatever you like.  This shows to people that it’s essentially an advert and should be viewed as such.  However, Google is different.  When you link to a company’s website or product you’ve just given them some ‘points’ (boosted their Page Rank) regardless of whether a post is marked as sponsored or there’s a little * next to the product.  For this reason, Google invented the ‘nofollow’ link.  They stipulate that if you’re paid for a link you must mark it as a ‘nofollow’ link, and what this means is that Google knows it’s a paid link and doesn’t give it any points.  Blogger makes this easy for you as when you create a link there’s a little box you can click on the bottom link to make it ‘nofollow’. 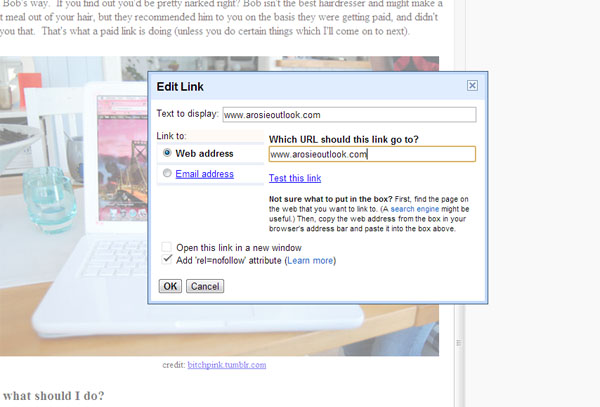 What does this mean for companies?

You’ve probably already guessed that a nofollow link for a company is as good as a chocolate teapot for them. You’re not giving them any Google points so you’re not boosting them up the rankings so their perception would be that there’s nothing in it for them.  Furthermore, companies are trying to disassociate themselves from ‘sponsored posts’ so what I’m seeing now is an increase in the amount of emails from PR companies who are requesting a link or post in exchange for payment, but who don’t allow you to mark it as a sponsored post, and who won’t allow it to be a nofollow link.

But I need the money, what’s the worst that could happen?

This brings me onto what I mentioned at the start, the Google ‘clamp down’.  Google are pretty wise to the paid link business now, and they’re pretty pissed off.  Last week they rather made an example of Interflora, who ran a campaign via advertorials on regional newspapers’ websites.  Of course an advertorial is really another example of a paid link without disclosure, and so Google put them on the naughty step, big time.  They basically wiped Interflora from Google so that even when you searched for ‘Interflora’ you couldn’t find them, along with removing all of their valuable keywords (so if you searched for ‘flowers online’ or ‘flowers delivered’ they wouldn’t be found.) Then they reduced the Page Rank scores for the newspapers that had hosted the advertorials, effectively reducing how high they appear in searches. (You can read a news article about this here – credit to wehearthome for sending this to me!)

Google then issued a reminder about selling links, saying “Please be wary if someone approaches you and wants to pay you for links or “advertorial” pages on your site that pass PageRank. Selling links (or entire advertorial pages with embedded links) that pass PageRank violates our quality guidelines, and Google does take action on such violations.”  Google has also been known to strip the page ranks of bloggers who sell links too – it’s not just the companies that are penalised.

This seems to have left a lot of companies, PRs, Agencies and bloggers a little nervous.  Losing your rank in Google is obviously a company’s worst nightmare and the penalty imposed on Interflora could be very costly for them financially.  Not being able to pay for links means that companies are going to have to do one of two things (or both!) … 1) Build a product or service so blindingly awesome that people talk about it and link to your website for free (e.g. genuine word of mouth recommendation = Google, OFT and ASA are all happy) or get a bit creative about how they interact with bloggers.  If they can’t offer money or products, what could they offer? This article on Search Laboratory has some ideas, essentially, building relationships and offering rewards like building infographics, doing photoshoots, putting on events or blogger schemes like the ones Aussie and Witch Skincare offer.   Joining affiliate networks so that you get a small amount of commission if you sell an item on the basis of someone seeing it on your blog is another way to get a bit of money back from a company rather than promoting them for free.

Well firstly, I can’t tell you whether you should or shouldn’t accept sponsored links on your blog.  That’s up to you – I’m just explaining what the consequences would be.  Likewise, I’ve seen a lot of bloggers accept paid links and not disclose them, again, makes me slightly uncomfortable but it’s your blawg.  What I would say is that if the direction of travel is that these payments will cease you might find that things change in blogosphere.  I’d suggest it will become more about mutually beneficial relationships and building links with brands rather than just being thrown a bunch of fivers and feeling slightly dirty about it afterwards.  And I like that idea.  Considering the amount of dislike I see for sponsored posts in Twitter chats and generally I’d suggest it might not be such a bad thing for blog readers either.