I am not sure I particularly look my best in these photos but I thought I would post them anyway as I wanted to share a couple of new things I have. I won’t anatomically annotate my flaws but I feel quite tired and a bit rundown at the moment.  I always had perfect skin in my adolescent years but since I started wearing make-up in my mid-20s I’ve noticed it go quite downhill and I’m not entirely sure how to fight its various imperfections! Also I’ve spent the last couple of weeks eating really healthily but on Thursday we went out for dinner and I had battered cod and chips and have been suffering with horrendous gripe-y stomach cramps ever since which have kept me up in the night the last couple of nights.  Sorry, this wasn’t intended to be a whinge-fest! Just, if I look a bit tired and uncomfortable, well, that’s why.

Call it shallow and superficial but I’ve always thought that the best way to combat feeling a bit rundown and glum is to get dressed up in clothes you feel nice in.  For me it definitely only exacerbates the problem if I slub around in jogging bottoms and a baggy t-shirt.  So today I decided to be a smart-bum and find an excuse to give a few new things their first outing.  Along with the majority of the blogging population I bought this Céline replica t-shirt from VIPXO’s recent post and I wanted to try it tucked into some tailored trousers.  I bought these trousers in the Jack Wills sale, they were reduced from £98 to £29 which is a bit of a bargain as they’re wool and fully lined.  They’re really warm and a perfect addition to my workwear wardrobe whilst it’s still so chilly.  The shoes are also new, bought from TK Maxx for £20 in their January sale (they’re Dune).  I own loads of platform heels but I wanted to try some smaller heels and these are comfortable enough to wear during the day. 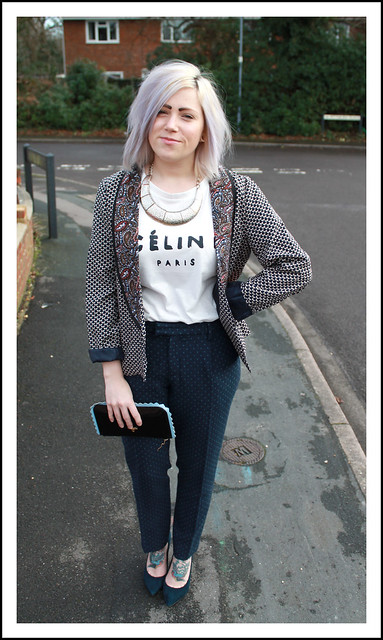 We went out with some friends last night to a really cool restaurant/bar in Christchurch.  It was really nice to just sit around catching up (and drinking my favourite cider, Orchard Pig, yum).  Because it’s a little town all the bars in Christchurch shut at 11 which meant a fairly early night for a night out and luckily I’m not suffering too much with a hangover today.  This afternoon Tom and I have a trial at a spa hotel fairly close to us.  If you follow me on Twitter you might have seen I’m desperate to find a gym nearby that isn’t either wildly expensive or half an hour away. This one is potentially in the former category but if nothing else we’ll get a free splash around in a pool and a loll in a jacuzzi, which sounds like exactly what I need!  How are you all spending your Saturdays?