I’ve been in Florida since Friday now, and since I brought my little Netbook with me and there’s wireless in the apartment I thought I’d share a few photos and words of what I’ve been up to.  As you’ve probably already seen, I’ve had some other awesome bloggers send over posts which have been scheduled in for whilst I’m away but as it’s clouded over here and my brother, Dad and boyfriend are out at Kennedy Space Center I thought I’d take the opportunity to sit down and write one of my own.

Funnily enough we had a conversation when we were in the taxi on the way to the airport where we talked about ‘things you want to tell people about but that they’re actually not interested in’.  The list we came up with was, your dreams, your holidays, your children and your car journeys (e.g other people’s bad driving).  I’m kind of relying on the fact that there might be some exceptions to the rule out there who might want to hear about my little trip!

We arrived on Friday night to thunder, lightning and lots of rain so we took the opportunity to unpack and pick up pizza from the onsite Dominos (yum!)  The next morning me, my brother and Tom were in charge of the supermarket and we were literally like kids in a candy shop.  We filled the trolley with Jolly Ranchers, S’mores Pop Tarts, Snickerdoodles, Cinnamon Rolls, Reese’s Peanut Butter Cup ice cream, Butterfingers and Cheetos.  I seriously would be as big as a house if I lived here, they have so much amazing food! Not sure it was quite the food shop my parents were expecting when we returned home with it all!

The first few days we did some outlet shopping at Florida Mall and Orlando Premium Outlets.  Amongst some t-shirts and shoes (I bought some black Toms and some navy Converse) I picked up a few beauty bits I’ve been after for a little while.  I’m actually not sure some of them were any cheaper but I got the Bobbi Brown Shimmer Brick Compact (£18), Mac Face and Body Foundation (£20), Smashbox Artificial Light (£11) and Origins Drink Up Intensive Mask (£11).  Are there any other products/brands you’d recommend picking up whilst I’m out here? 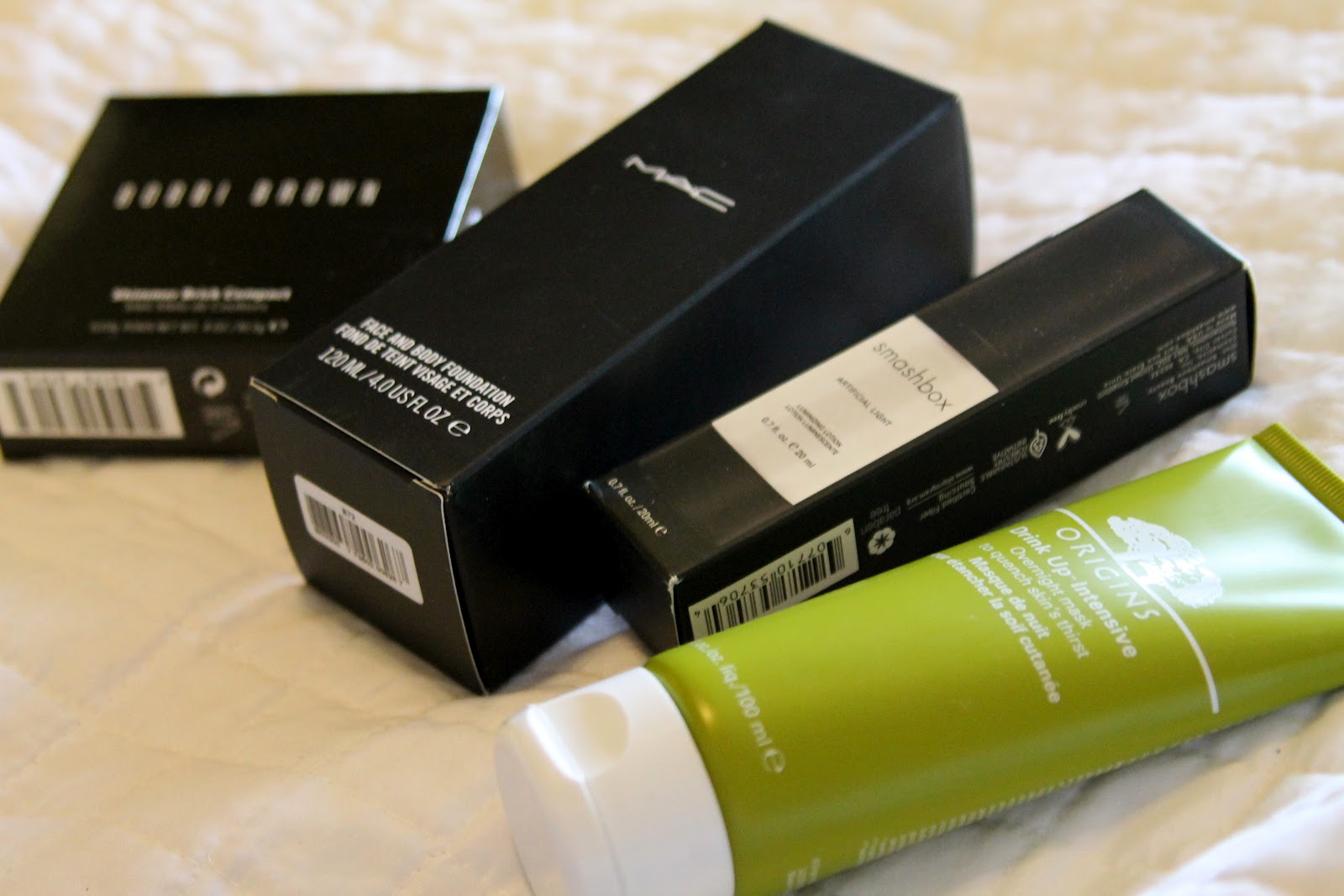 Here are some iPhone snaps of [1] my tourist-y shark t-shirt, [2] M&Ms world [3] my brothers’ Vans I dyed with Kool Aid [4] the slightly worrying weather forecast [5] dinner at Planet Hollywood [6] a Harry Potter t-shirt I bought for Tom and then the larger ones are three sunsets and a sunrise. 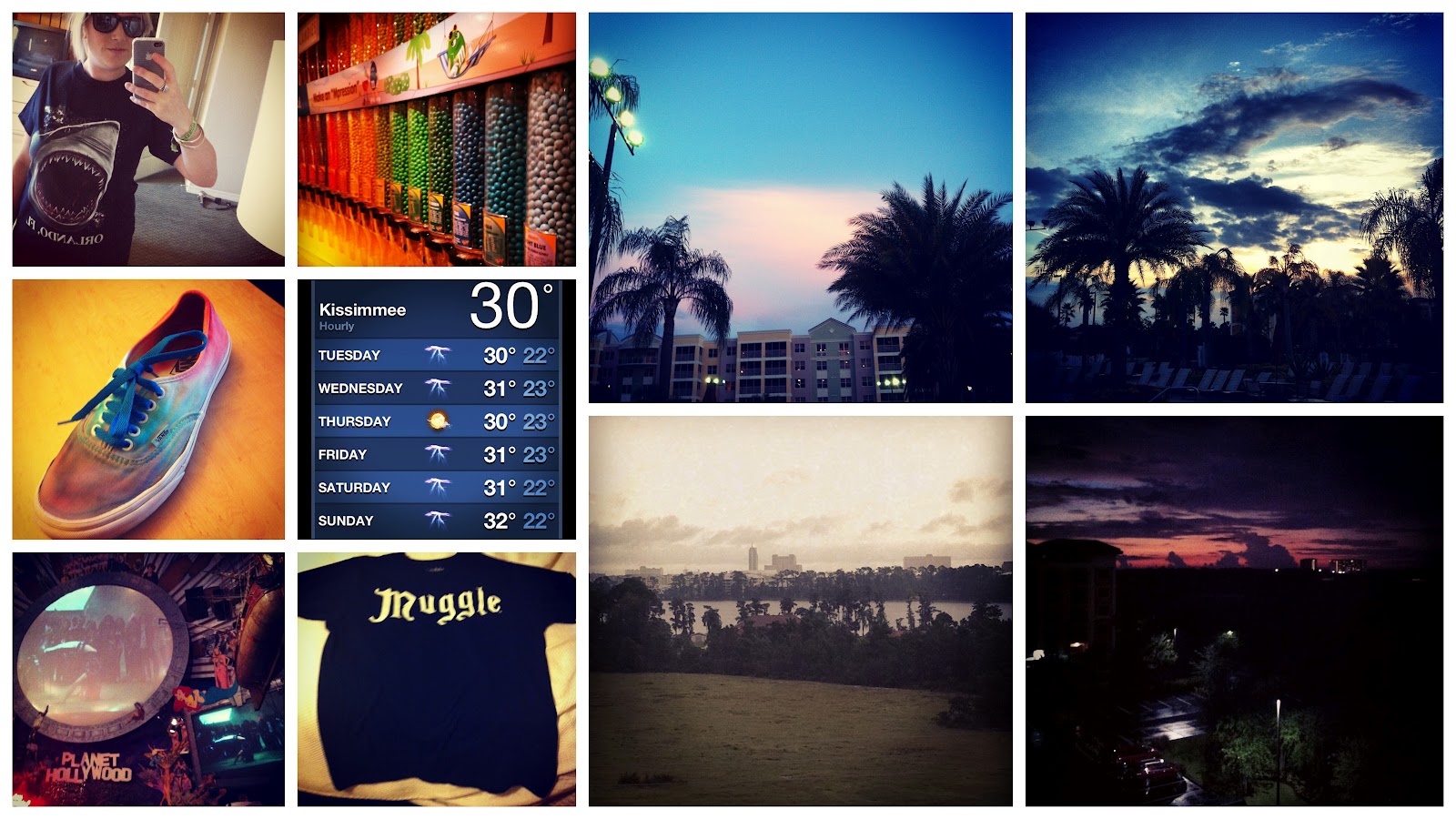 Yesterday we went to Boggy Creek Airboat Rides for a 45 minute tour of Boggy Creek, which was absolutely unbelievable.  The five of us and Eddy, a tour guide, went around the wetlands and swamps seeing amazing birds along with baby alligators and the Mummy alligator!

It was just amazing and one of the best things I’ve ever done.  Yesterday afternoon we lazed by the pool and then in the evening we went to a Caribbean restaurant called Bahama Breeze on International Drive.  The food was amazing; I had a burger with caramelized onions, goat’s cheese and avocado, with a strawberry mojito! Still feeling really tired from the flight though and have been in bed by 10pm every night! There are barbecue grills on site on the resort so the plan tonight is to have a ‘cookout’ (we have the most amazing looking steaks!) whilst watching the sun set and drinking cider.  As you can probably tell I am having a great time! It’s so nice to be able to relax away from home and not be worrying about the stresses of work and looking after the house.  I’m super missing Bodhi puppy though!

We still have a good while left so any suggestions for things to do/eat/buy would be gratefully received.  We have on the list Universal Studios and Islands of Adventure, Sea World, Discovery Cove and Typhoon Lagoon – I think we might leave Disney as we’ve all done it before and can’t come to a consensus about which one to do!