A couple of years ago, right about now, I’d be shoving a load of cheap plastic sunglasses into a drawer somewhere; maybe three or four pairs with a cumulative cost of about 8 or 9 quid.  About the same time my summer wardrobe got bundled into a bag somewhere, so too would any pairs of sunglasses that had survived the summer without being sat on, lost in the pocket of a coat I’d never wear again or left in the back of a taxi.  This cycle continued until two things happened.  Firstly, I discovered two little lines ingrained into my forehead, just between my eyebrows.  “That’s weird”, I thought, furrowing my brow.  “I never frown.”  Then one day I was driving and I realised that I frown all the time.  Frowning is basically my actual face.  Because I wear cheap sunglasses, or not at all, and ergo, I do the classic ‘squint frown’.  The second thing that happened is that Tom suggested I buy a more expensive pair of sunglasses, perhaps one where I don’t squint when the sun’s out, even when I’m wearing them.  I kind of didn’t realise that such wondrous things existed until I tried his polarised sunglasses and it was a bit of a revealation.  These days I ‘spend out’ on sunglasses, and I never pack them away – I always have a pair in the car for driving in, even in the winter (on brighter days, not like, in the dark or anything, I’m not one of them!).

I recently got to emailing with the lovely Jess at Sunglasses Shop and happened to mention that despite my new found love for ‘proper’ sunglasses, there were one cheap pair I had been extremely fond of. 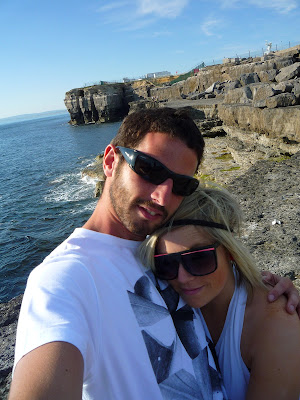 This is me a couple of years ago in the much-loved Primark beauties! To cut a lot story short, not long after this photo Tom went in for an overenthusiastic hug and, his shoulder being vaguely sunglasses height, cracked the arm off.  I mourned them for quite some time.  I told Jess this and she came right back with the link to these sunglasses;  they literally couldn’t be more similar could they? They arrived within a couple of days and I wore them all holiday – it was so nice not to have to squint whilst reading by the pool!  They even got caught in a storm on Cocoa Beach (apologies for no makeup in these pics!)

The sunglasses I was sent are now out of stock but there are so many other amazing brands and sunglasses on the site, it’s well worth a look. Sponsored post aside, I really do believe cheap sunglasses are a false economy and would hugely recommend spending a bit more on them to avoid the dreaded mid-eyebrow wrinkle (not to mention how bad they are for your eyes).  Are you a cheap specs buyer like I was or do you invest in good eyewear?

*This is a sponsored post and I received a pair of sunglasses in return for this, and other work I am doing with the brand.