This weekend was one of my very best friends’ hen weekend, which started with me hopping on a train to Brighton early on Saturday morning and meeting the rest of the group in Southampton.  They weren’t difficult to spot as they were all dressed as hula girls in grass skirts and bikinis (because I’d spent some of the journey on my own I instead opted for hawaiian print leggings and lots of lei garlands instead!) The activities that were organised for the do were a two course dinner at Vodka Revs, followed by a ‘party bus’ – essentially a bus strung with bunting and balloons and equipped with an amp for cheesy music – which took us from venue to venue and then rounded us up at the end of our slot in each place (a very handy service when you have 17 inebriated hula girls scattered around a nightclub!) The next day was spent mooching around Brighton and soaking up the sunshine before getting the train home in the evening.  I only had my iPhone with me so I’m afraid I don’t have any particularly good photographs but here are a small selection…. 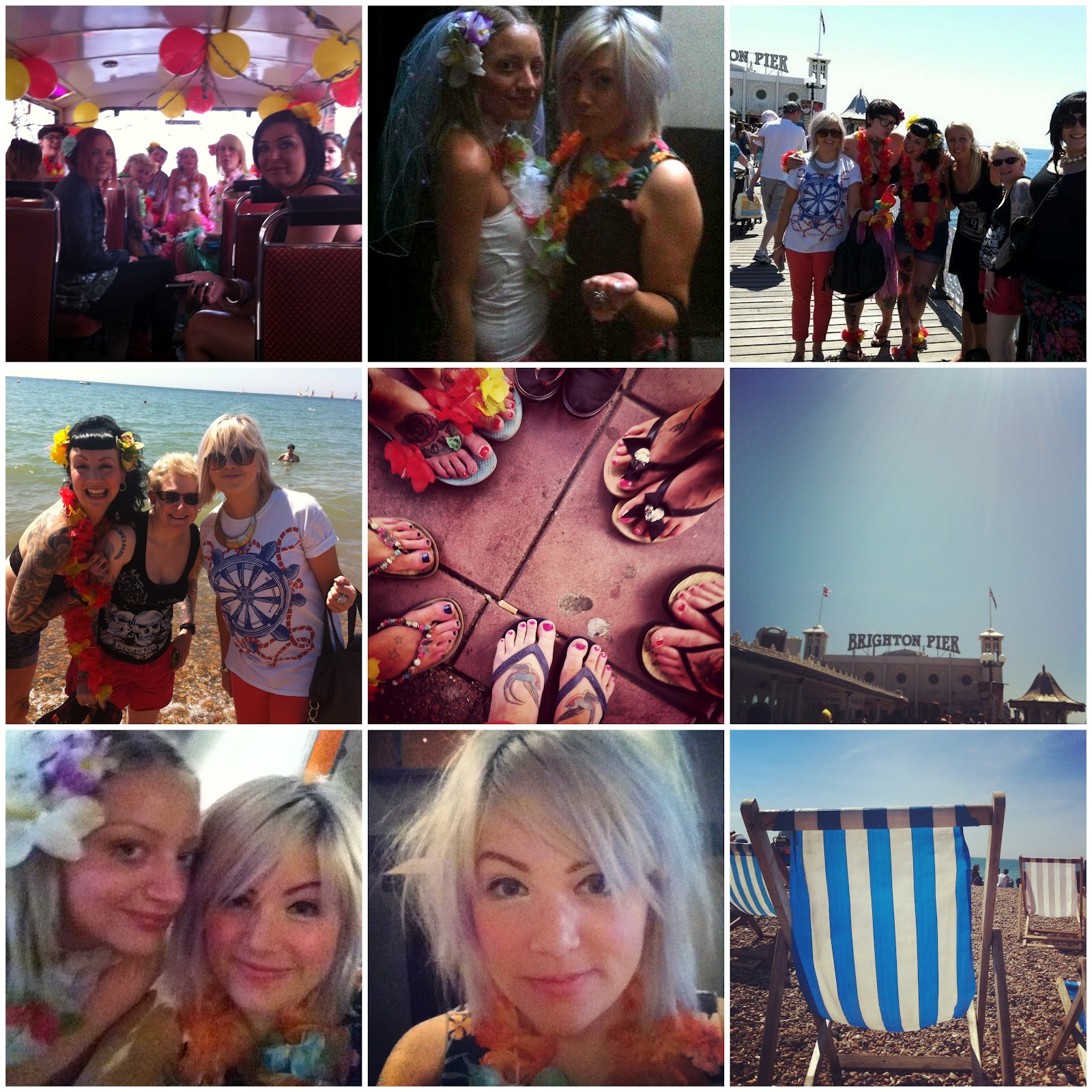 When I arrived home I felt sufficiently grotty; probably due to the combination of bad food (chips for lunch, dinner and on the way home after the night out… and a fried breakfast in the morning!), drinking and not having much sleep.  As I don’t go out as much as I used to, and I almost never go to nightclubs until the early hours of the morning, I felt like my body was really unhappy with me!  I was even more horrified when I weighed myself and discovered I’d managed to put 3lbs on in two days! Since I came off the Jenny Craig diet I’ve made a real effort to eat better and be more conscious of the quality of food that I eat and I decided on Sunday night that I’d try and make my body better (and shed those extra lbs!) by picking this up again and having a super healthy week.  We’ve started ordering Abel and Cole boxes so we can base our meals around organic veggies and I also did a food shop on Monday full of lots of good things to eat this week.  Whilst off on Monday (I took Monday off work to recuperate and catch up on sleep!) I also found this Tumblr, which intersperses photos of slim/fit girls with workout routine tips and other fitness related stuff and it made me feel quite motivated to start doing exercise this week along with trying to eat healthily too.  I’m on dog walking duty this week which means that before work I have to take Bodhi for a quick walk and we usually take him around the school field round the corner from us.  In my bout of motivation on Monday afternoon I decided to lace up my running shoes and take him for a run round the field instead and it felt really good! I did the same yesterday morning and this morning before work (I was out there at 6.30am – ouch!) and I am aching so hard today.  I’ve been using the Nike Running app which I highly recommend as you can set up playlists and it maps your route and gives you lap times and so on so it’s going to be really useful to measure my progress.  I did a mile and a half this morning of running three sides of the field and walking the fourth several times (I don’t think the Olympics athletics team will be quaking in their boots when I reveal it took me 12 minutes to run a mile; though then again they don’t normally have to do their runs with small white dogs darting around their legs).

I joke about my 12 minute mile but at the same time I actually feel good about it because it’s better than the 0 minute nothing I was doing last week when I was still asleep in bed at 6.30! Also, as I said on the phone to my Mum last night, however slow you run, or however many times you have to stop, you’re still lapping everyone on the sofa or still in bed!

I’m not going to get smug about it or extoll the virtues of running because I’ve only been doing it three days but what I will say is that I feel really good about it and I’m looking forward to carrying it on.  I’d love to be a bit fitter and more toned for our holiday in September and being the competitive little person I am I’m excited about carrying on using the app and being able to beat my time as I improve my stamina.  I know it’s going to be harder next week when Tom takes over dog walking duty again and I’m not forced to be out on the school field at silly o’ clock but at the same time it will probably be easier running without having Bodhi trying to trip me up or show me up by bounding off ahead of me!

Do any of you run and have any tips you want to share with me? Have you had any blowouts and feel like getting healthier?