As part of my job working in a press office I have to monitor the press for any coverage of what we do, or opportunities where we could have been featured.  We have all been allocated a paper to read every day, and, for my sins, I have to read The Sun.  I don’t mind really – I’d rather that than read the Daily Mail – but I was interested in how the story of the sexist remarks made by football commentators Andy Gray and Michael Keys was reported today.

If you missed the story, the two football pundits were discussing the fact that there was a female lineswoman at a Premier League game on Saturday and how it was impossible that she could fulfil that role and would need someone to ‘explain the offside rule to her’.  There were some further sexist remarks made, and, unfortunately for the pair, their mics were still on and the audio was passed to various press agencies (which culminated in Andy Gray being sacked after he refused to apologise). 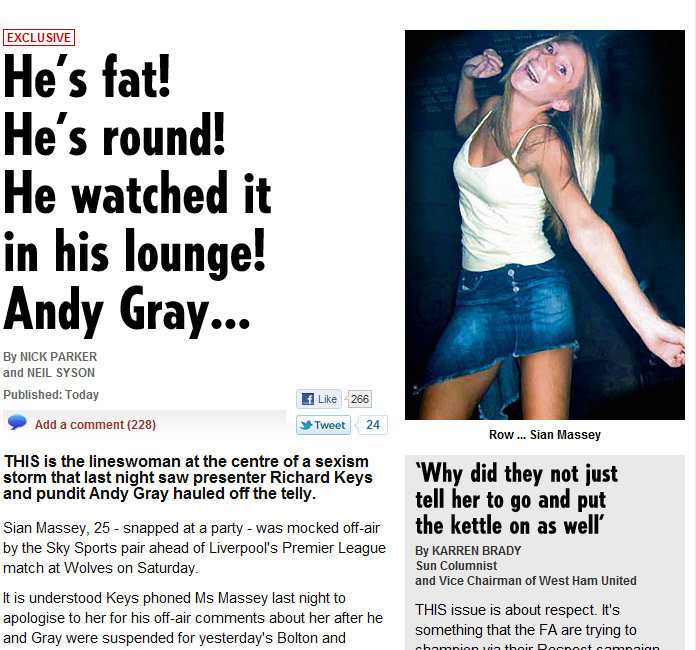 The first thing that struck me as strange was how The Sun, on the one hand appeared to frown upon the discriminatory comments (running an editorial piece from their columnist Karren Brady) and on the other hand chose a photo of the female lineswoman in a short skirt dancing at a party (presumably nicked from her Facebook).  If they really were in support of her as a professional woman who has every right and ability to do that job then surely, surely they could have led with a photo of her on the pitch in her kit?

But what really got me, was having to flick past a photo of a girl with her boobs on show before I could get to the story.  And what I asked myself was, can we really have equal rights, and banish sexism and discrimination towards women, when the biggest selling newspaper in the UK publishes daily on its third page a photo of a topless woman? The message that this sends to the great British public, is that for a few silver coins you can take home a photo of a woman suggestively baring her half nakedness for your viewing pleasure.  Nestled on the third page between the political news, weather and celebrity news is a snap of a real life woman – for whom most of the Sun’s readership will be old enough to be their Dad.  (I will gloss over the slight perversity of having 50 year old men gawp at photos of 18 year old girls over their teabreaks).

But it’s not The Sun’s fault, is it, because the key thing for me is not only demand, but supply.  What constantly astounds me is not the men that perpetuate this ‘British institution’ by buying the paper, but the woman who queue up to be featured.  The Sun have an annual ‘Page 3 idol’ where, in large numbers, women can enter the competition and be voted on whether they are ‘hot or not’ online.  Now, on the one hand, I get that women are free to make their own decisions and make their money however they choose.  But on the other hand, isn’t it a little bit… well, sad…. that a percentage choose to make their money by taking their clothes off for men’s viewing pleasure?  Surely all they are doing is perpetuating the perception that women are just pieces of meat that can be bought along with your pint of milk and packet of biscuits on the way into work?

Furthermore, along with the steady supply of women who want to be a page 3 idol, the city I live in has at least two or three strip clubs on the high street.  Not tucked away in a back alley, not round the corner, down the road… but on the high street.  And in there, for the cost of a few pints you can have a half naked woman dance for you (for the cost of a few more they will take more off – etc etc).  Now, I know friends of friends who have worked in places like this to pay their University fees.  I know of other women who send their photos in to ‘lads’ mags’ like Front and Nuts.  The saddest part about magazines like Nuts, FHM, Front, Zoo etc is the amount of genuinely talented women who grace their covers every month.  Women who deserve to be taken seriously for their professional abilities, not to be interviewed about the intimate details of their sex lives and then snapped in their smalls.

And so I guess the question for me, is, in a society where the mainstream press slot half-naked women in with hard hitting news, where talented women are expected to strip off in their music videos and reveal all in interviews to promote their films, and where you can walk into For Your Eyes Only on a Saturday night, hand over £20 and see a real life naked girl, can equality ever really exist? And should we really be blaming Andy Gray for seeing women as sex objects who can’t understand the offside rule, or should we be blaming Chloe, 22, from Leeds (and the rest) for continuing to buy into it?

There is another really interesting blog post about this issue on Lizabelly’s blog here.